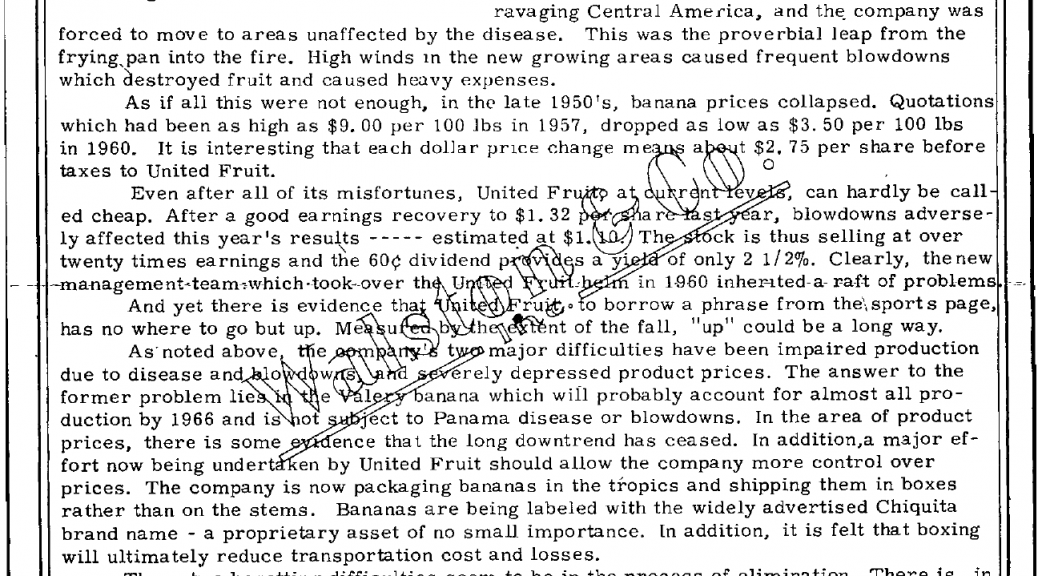 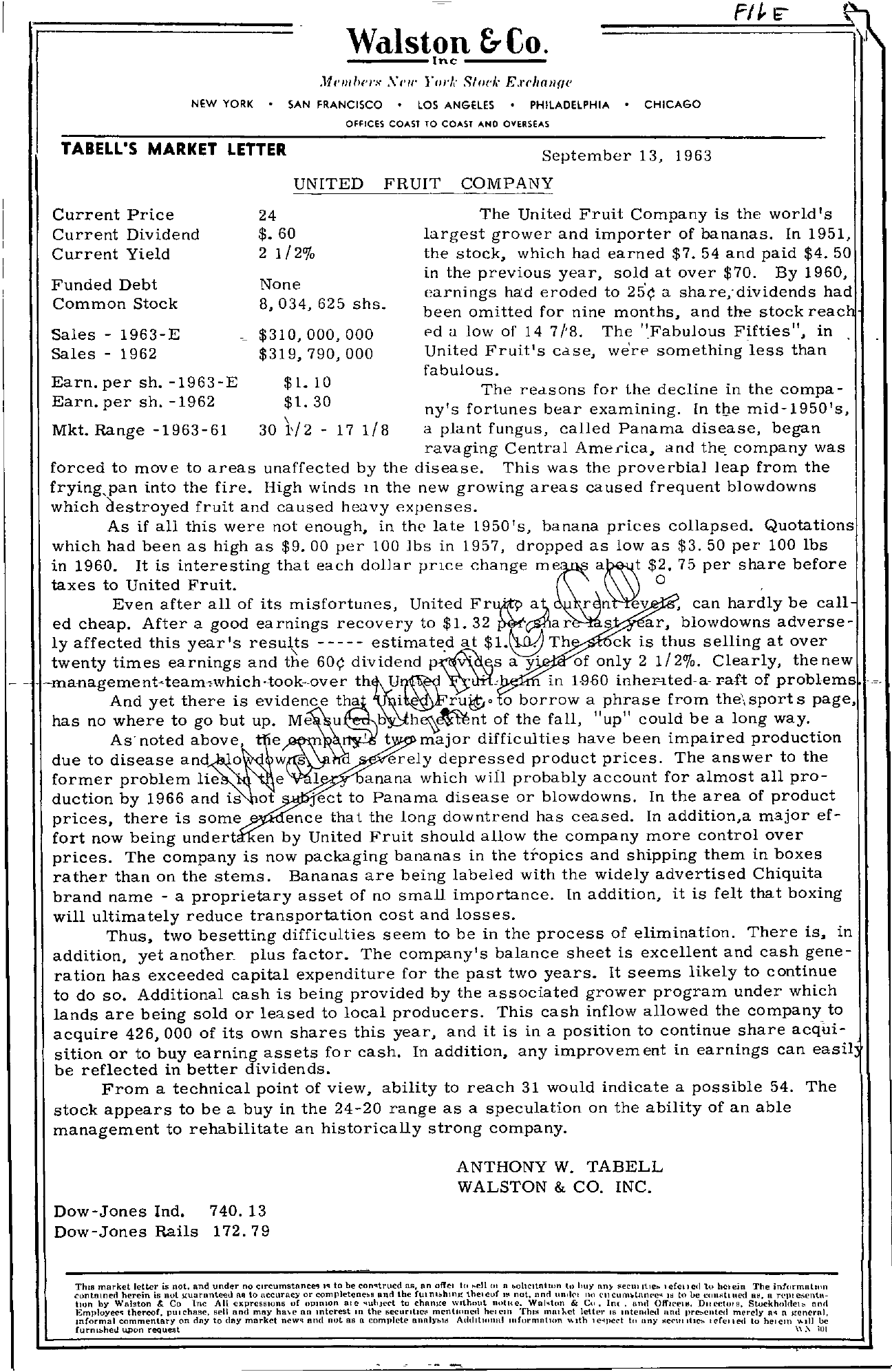 Walston &Co. .l1('lJIhl''S XI'/I twk Stock E.l'('ilan(l(J NEW YORK SAN FRANCISCO LOS ANGELES PHILADELPHIA OFFICES COAST TO COAST AND OVERSEAS CHICAGO TABELL'S MARKET LETTER September 13, 1963 UNITED FRUIT COMPANY Current Price 24 The United Fruit Company is the world's Current Dividend .60 largest grower and importer of bananas. In 1951, Current Yield 2 1/2 the stock, which had earned 7.54 and paid 4.50 Funded Debt Common Stock None 8,034, 625 shs. in the previous year, sold at over 70. By 1960, earnings had eroded to 25 a share;dividends had been omitted for nine months, and the stock reac Sales – 1963-E Sales – 1962 Earn. per sh. -1963-E Earn. per sh. -1962 Mkt. Range -1963-61 310,000,000 319,790,000 1. 10 1. 30 \ 301'/2 – 171/8 f'd a low of 14 7/'8. The -Fabulous Fifties, in United Fruit's Cdse, Werf' something than fabulous. The redsons for the decline in the compa- ny's fortunes bear examining. In tl)e mid-1950's, a plant fungus, called Panama disease, began ravaging Central America, and the company was forced to move to areas unaffected by the disease. This was the proverbial leap from the frying,pan into the fire. High winds In the new growing areas caused frequent blowdowns which destroyed fruit and caused heavy expenses. As if all this were not enough, in the late 1950's, banana prices collapsed. Quotations which had been as high as 9.00 per 100 lbs in 1957, dropped as low as 3.50 per 100 lbs in 1960. It is interesting that each dollar pnce change 2.75 per share before taxes to United Fruit. 0 Even after all of its misfortunes, United r n ev ,can hardly be call ed cheap. After a good earnings recovery to 1. 32 s ar, blowdowns adverse- ly affected this year's results —– estimated at 1. . Th ck is thus selling at over twenty times earnings and the 60 dividend a y' of only 2 1/2. Clearly, the new – – in inheI'lted-a- raft of problems And yet there is evidence 0 borrow a phrase from the\ sport s page, has no where to go but up. li of the fall, up could be a long way. As'noted above ' t major difficulties have been impaired production due to disease and ws erely depressed product prices. The answer to the former problem lie eI anana which win probably account for almost all pro- duction by 1966 and is ot 'ect to Panama disease or blowdowns. In the area of product prices, there is some ence that the long downtrend has ceased. In addition,a major ef- fort now being undert en by United Fruit should allow the company more control over prices. The company is now packaging bananas in the tropics and shipping them in boxes rather than on the stems. Bananas are being labeled with the widely advertised Chiquita brand name – a proprietary asset of no small importance. In addition, it is felt that boxing will ultimately reduce transportation cost and losses. Thus, two besetting difficulties seem to be in the process of elimination. There is, in addition, yet plus factor. The company's balance sheet is excellent and cash gene- ra tion has exceeded capital expenditure for the past two years. It seems likely to continue to do so. Additional cash is being provided by the associated grower program under which lands are being sold or leased to local producers. This cash inflow allowed the company to acquire 426,000 of its own shares this year, and it is in a position to continue share acqui- sition or to buy earning assets for cash. In addition, any improvement in earnings can easil be reflected in better dividends. From a technical point of view, ability to reach 31 would indicate a possible 54. The stock appears to be a buy in the 24-20 range as a speculation on the ability of an able management to rehabilitate an historically strong company. Dow-Jones Ind. 740. 13 Dow-Jones Rails 172.79 ANTHONY W. TABELL WALSTON & CO. INC. ThiS mflrket letter is not, and under no Circumstance'! 1'1 to be ('Ontrl1cd as, nn olfel t(l ..ell 01 1I bohcltntwn tn hllY fID seeUlltle,., lefCllcd 10 hClein The informnhn COlltnlnert h('Tein is not J.(uarnnteet.i fie to lIccufacy or oomilletenebs anlt the fUlnl!hll1J! theleuf It 110t. IlnCl un,I('1 11( to hc n rC\lleentl\- tlUn by Walston &. Co Inc All expreSSIOns tlf oPinton all' ouhJctt to chnnJ!e wlthul llntlte. Wulton & C, 1m, untl OffICt'U, DIIl'CtIJlS, Stockh.,ldcl … nlHI theroof, pUlchasc, sell and may ha\c un mterest In the seeurltlCl mentUlm.\ ht'ICIti mat).,ct lellt')' IS mtcntled lInt! IIre…cllted merely ao n J!enernl Informnl commentary (In Clny to day market and not as n complcte Atltlltl,,ul IIIrUl'mnt,n \\llh to uny 1('(('1 led to helCl\l \\111 (Ul'nt,.heo,l u,pon request \\.\ lUI