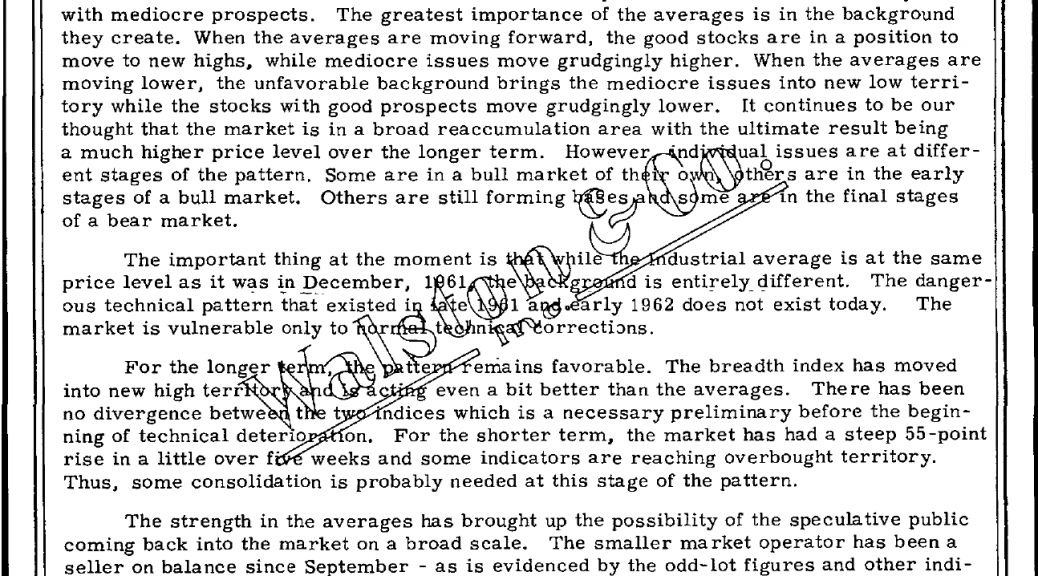 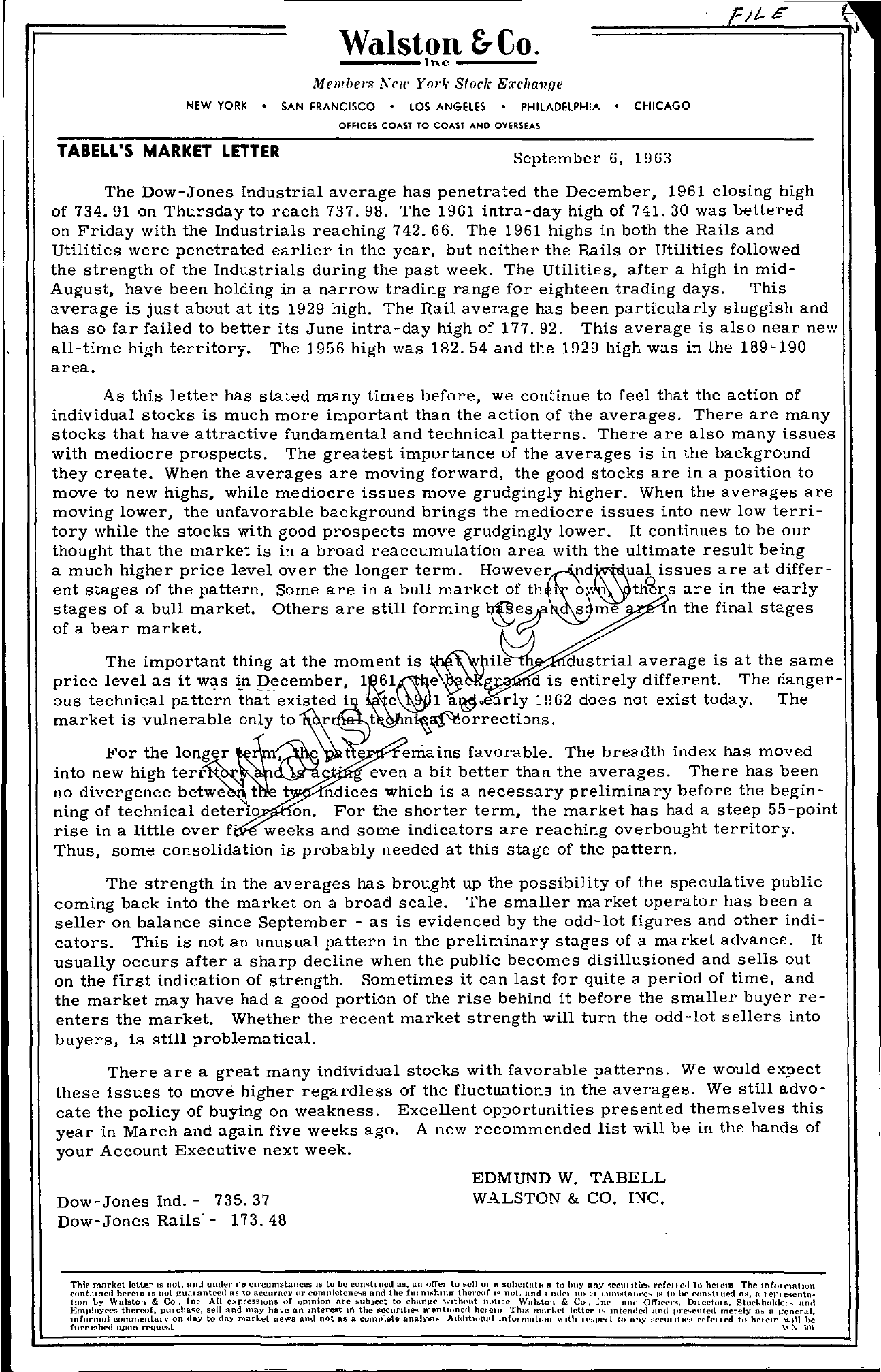 Walston &Co. – Inc – – – – – Memler. Xel/' Yor' Stock Exchange NEW YORK SAN FRANCISCO LOS ANGELES PHILADELPHIA CHICAGO OFFices COAST TO COAST AND OVERSEAS TABEll'S MARKET lETTER September 6, 1963 The Dow-Jones Industrial average has penetrated the December, 1961 closing high of 734.91 on Thursday to reach 737.98. The 1961 intra-day high of 741. 30 was bettered on Friday with the Industrials reaching 742.66. The 1961 highs in both the Rails and Utilities were penetrated earlier in the year, but neither the Rails or Utilities followed the strength of the Industrials during the past week. The Utilities, after a high in midAugust, have been holding in a narrow trading range for eighteen trading days. This average is just about at its 1929 high. The Rail average has been partfcularly sluggish and has so far failed to better its June intra-day high of 177.92. This average is also near new aU-time high territory. The 1956 high was 182.54 and the 1929 high was in the 189-190 area. As this letter has stated many times before, we continue to feel that the action of individual stocks is much more important than the action of the averages. There are many stocks that have attractive fundamental and technical patterns. There are also many issues with mediocre prospects. The greatest importance of the averages is in the background they create. When the averages are moving forward, the good stocks are in a position to move to new highs, while mediocre issues move grudgingly higher. When the averages are moving lower, the unfavorable background brings the mediocre issues into new low terri- tory while the stocks with good prospects move grudgingly lower. It continues to be our thought that the market is in a broad reaccumulation area with the ultimate result being a much higher price level over the longer term. issues are at differ- ent stages of the pattern. Some are in a bull market of th I are in the early stages of a bull market. Others are still forming s me of a bear market. P. 10 the final stages The important thing at the moment is price level as it was pecember, ous technical pattern that market is vulnerable only to t dustrial average is at the same d is entire1y different. The dangerarly 1962 does not exist today. The For the e emains favorable. The breadth index has moved into new high terr even a bit better than the averages. There has been no divergence betwe t t ndices which is a necessary preliminary before the begin- ning of technical deterlO on. For the shorter term, the market has had a steep 55-point rise in a little over f' weeks and some indicators are reaching overbought territory. Thus, some consolidation is probably needed at this stage of the pattern. The strength in the averages has brought up the possibility of the speculative public coming back into the market on a broad scale. The smaller market operator has been a seller on balance since September – as is evidenced by the odd-lot figures and other indicators. This is not an unusual pattern in the preliminary stages of a market advance. It usually occurs after a sharp decline when the public becomes disillusioned and sells out on the first indication of strength. Sometimes it can last for quite a period of time, and the market may have had a good portion of the rise behind it before the smaller buyer reenters the market. Whether the recent market strength will turn the odd-lot sellers into buyers, is still problematical. There are a great many individual stocks with favorable patterns. We would expect these issues to move higher regardless of the fluctuations in the averages. We still advocate the policy of buying on weakness. Excellent opportunities presented themselves this year in March and again five weeks ago. A new recommended list will be in the hands of your Account Executive next week. Dow-Jones Ind. – 735. 37 Dow-Jones Rails' – 173.48 EDMUND W. TABELL WALSTON & CO. INC. This mnrket letter IS not. and under n(l Circumstances 18 to be con'\tl ued as, nn offel to ..('II ,II 11 801lCl1lltlllli to lou)' Ilny dic retc! t e.1 \0 hel eln The In((I1 mntlUn (,,,nt/tined herem IS not f;Ufllantceti a9 to ilccurney or conllllctcne-.s nnd the fill thm'cor ' (IVt, lind un,l('1 Ill) .. 111 to ue (,Oflbtllll!(l (HI, It lcplcentn. lIon by Wnlston & Co, Inc All expressIOns or pm ion llre hubJcct to ChIlIlI-!' \I'lthput nuhce Wnh,tufl & (;0. Inc lind Offu'et't, Dlle('\III, Stl.lckh,,)dcl'I un.) JomllloyetS theroof, )IUICha;e, sell find may hale an mterest 11'1 the IlCCliratle'l mcntlUnCII hCICl1l 'fhl! Illnr….'t Ictter I., mtcnded lind re,cllled merel)' Db n j.!(.'ner.t.I Inrnrmui commentary on tiDY to da) market news and not as a complete annlYlllo A.hhtlllltl Illflll mnllUn \\ Ilh til IIny SC('U1 IIIC refClled to helcm Will rurIllshed upon request \\.\ ;01