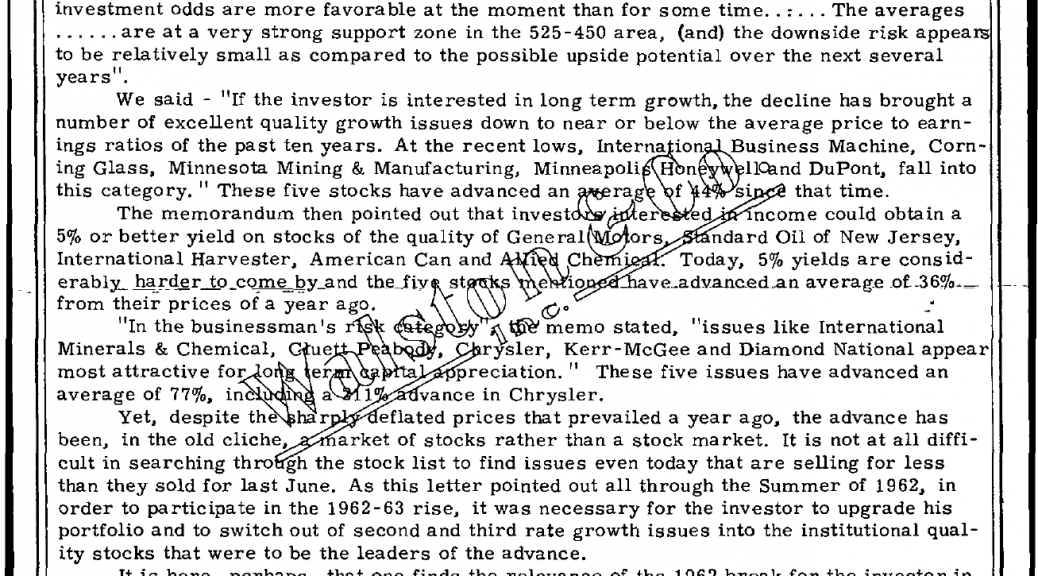 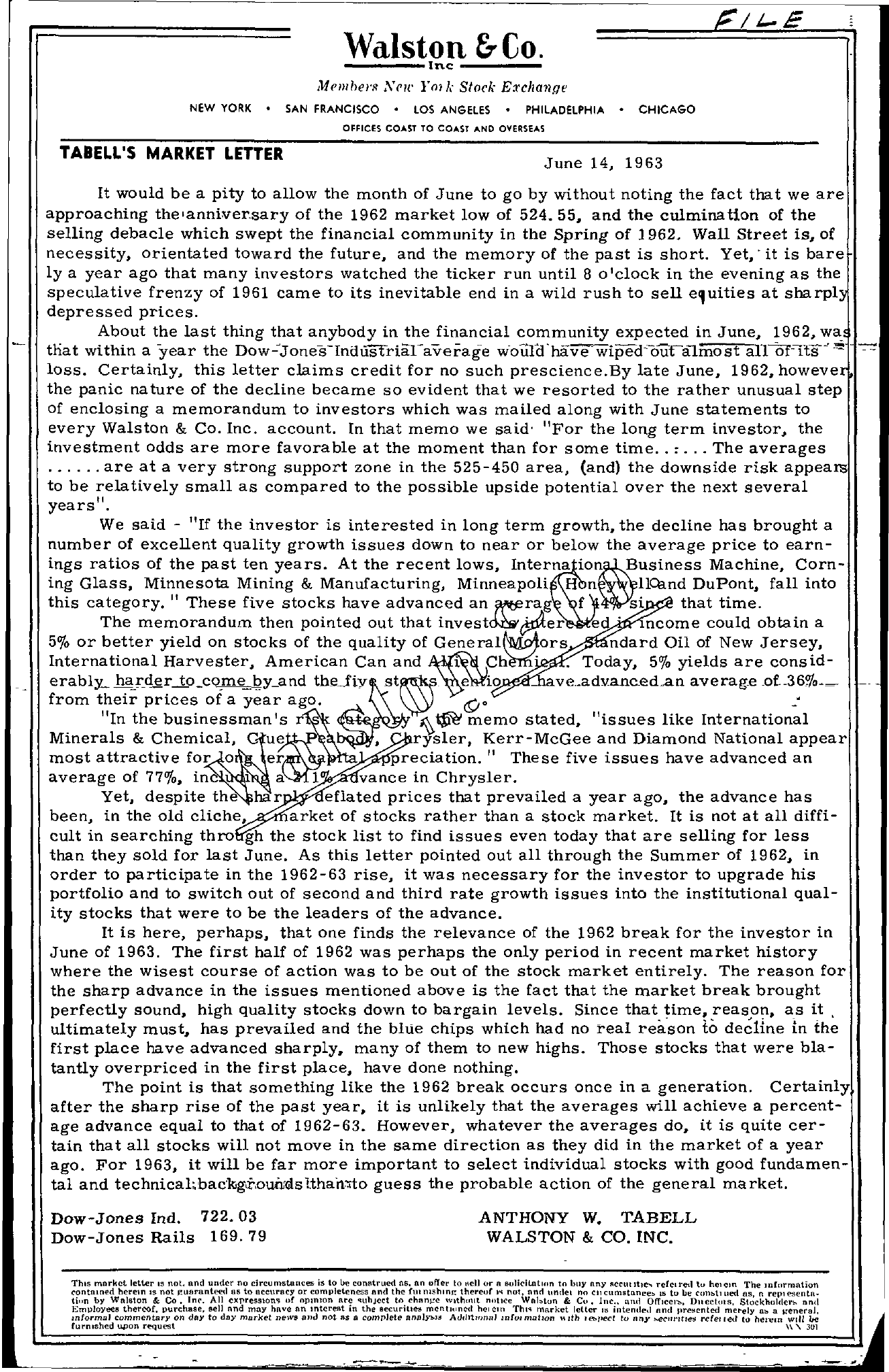 Walston & Co. —–lnc —– ,Yell' lm Ie Siock Exchange NEW YORK SAN FRANCISCO LOS ANGELES PHILADELPHIA CHICAGO OFFICES COAST TO COAST AND OVERSEAS TABEll'S MARKET lETTER June 14, 1963 11- It would be a pity to allow the month of June to go by without noting the fact that we are approaching the .anniver.sary of the 1962 market low of 524. 55, and the culmination of the selling debacle which swept the financial community in the Spring of 1962. Wall Street is, of necessity, orientated toward the future, and the memory of the past is short. Yet, it is bare lya year ago that many investors watched the ticker run until 8 0 'clock in the evening as the speculative frenzy of 1961 came to its inevitable end in a wild rush to sell e1uities at sharpl depressed prices. About the last thing that anybody in the financial community expected in June, 1962, wa tnat within a year the Dow-JonesInduStriaraverage woulcfhllvewipeaoutaimost an of'11s loss. Certainly, this letter claims credit for no such prescience.By late June, 1962, howeve the panic nature of the decline became so evident that we resorted to the rather unusual step of enclosing a memorandum to investors which was mailed along with June statements to every Walston & Co. Inc. account. In that memo we said' For the long term investor, the investment odds are more favorable at the moment than for some time.. , … The averages …… are at a very strong support zone in the 525-450 area, (and) the downside risk appears to be relatively small as compared to the possible upside potential over the next several years . We said – If the investor is interested in long term growth, the decline has brought a number of excellent quality growth issues down to near or below the average price to earn- ings ratios of the past ten years. At the recent lows, Interna Machine, Corn- ing Glass, Minnesota Mining & Manufacturing, Minneapoli H n ll03.nd DuPont, fall into this category. These five stocks have advanced an f si that time. The memorandum then pOinted out that ed' ncome could obtain a 5 or better yield on stocks of the quality of ndard Oil of New Jersey, International Harvester, American Can and . Today, 5 yields are consid- erably ha'derioco.me .1yand from their prices of a year ago. In the businessman ave..advanc.ed.an averag.e yo .' i\; memo stated, issues like International Minerals & Chemical, G ue ,rysler, Kerr-McGee and Diamond National appear most attractive for 0 er preciation. These five issues have advanced an average of 77, in 1 a 1 vance in Chrysler. Yet, despite the bar eflated prices that prevailed a year ago, the advance has been, in the old cliche, arket of stocks rather than a stock market. It is not at all diffi- cult in searching thro gh the stock list to find issues even today that are selling for less than they sold for last June. As this letter pOinted out all through the Summer of 1962, in order to participate in the 1962-63 rise, it was necessary for the investor to upgrade his portfolio and to switch out of second and third rate growth issues into the institutional qual- ity stocks that were to be the leaders of the advance. It is here, perhaps, that one finds the relevance of the 1962 break for the investor in June of 1963. The first half of 1962 was perhaps the only period in recent market history where the wisest course of action was to be out of the stock market entirely. The reason for the sharp advance in the issues mentioned above is the fact that the market break brought perfectly sound, high quality stocks down to bargain levels. Since that time, reason, as it . toultimately must, has prevailed and the blue chips which had no real reason in the first place have advanced sharply, many of them to new highs. Those stocks that were bla- tantly overpriced in the first place, have done nothing. The point is that something like the 1962 break occurs once in a generation. Certainly after the sharp rise of the past year, it is unlikely that the averages will achieve a percent- age advance equal to that of 1962-63. However, whatever the averages do, it is quite cer- tain that all stocks will not move in the same direction as they did in the market of a year ago. For 1963, it will be far more important to select individual stocks with good fundamen- tal and technicaLbacll;gcr.ouo.Gslthanrto guess the probable action of the general market. Dow-Jones Ind. 722.03 Dow-Jones Rails 169.79 ANTHONY W. TABELL WALSTON & CO. INC. ThiS mnrkct letter IS not. and undt'r no circumstnnces is to be construed as. an onel' to .wll or a sulicilatlfln to buy any lIecllt Ihc-. refeL red 't.. hel Cln The mformation contUined herem IS not as to accuracy or completeness and the fm nlshlnr thereur nut. nnd umlel no CII cumstance IS tu be Clmttl LIed as n repi esenta tiun by Walston & Co. In(', All expreSSIOn') uf oPinion are llhJect to chan)!e wlthllt nntue Wabton & Cu. Inc.. natl Offlcel.. DllcctIS, StJckhuldcn, Dnd Employees thereof, purchase, sell nnd mny have an mterest in the mcntwncd hCI ('Ill 'fhl market letter III intended Hnd merely fit a t.enerul. miormal commentary on dny to day market news nnd not- as a complete afwlYhl.!! Adflrtm1I1 mimmntlOn l\lth 1eIect tu lilly .e('Ul'lties retellcd to hCI'Clfl Will be furnished upon f!!qUest ,,\ 301