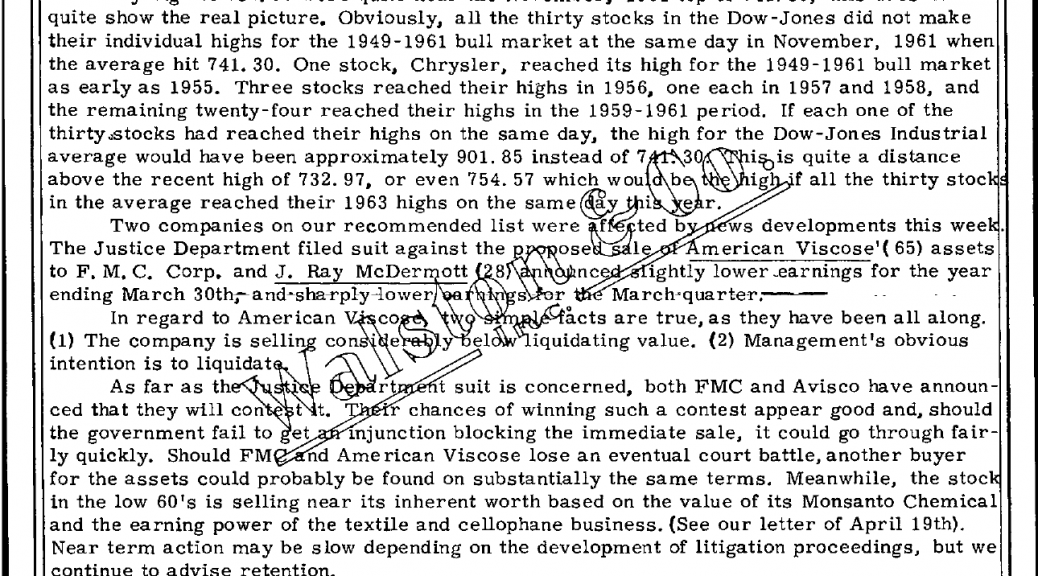 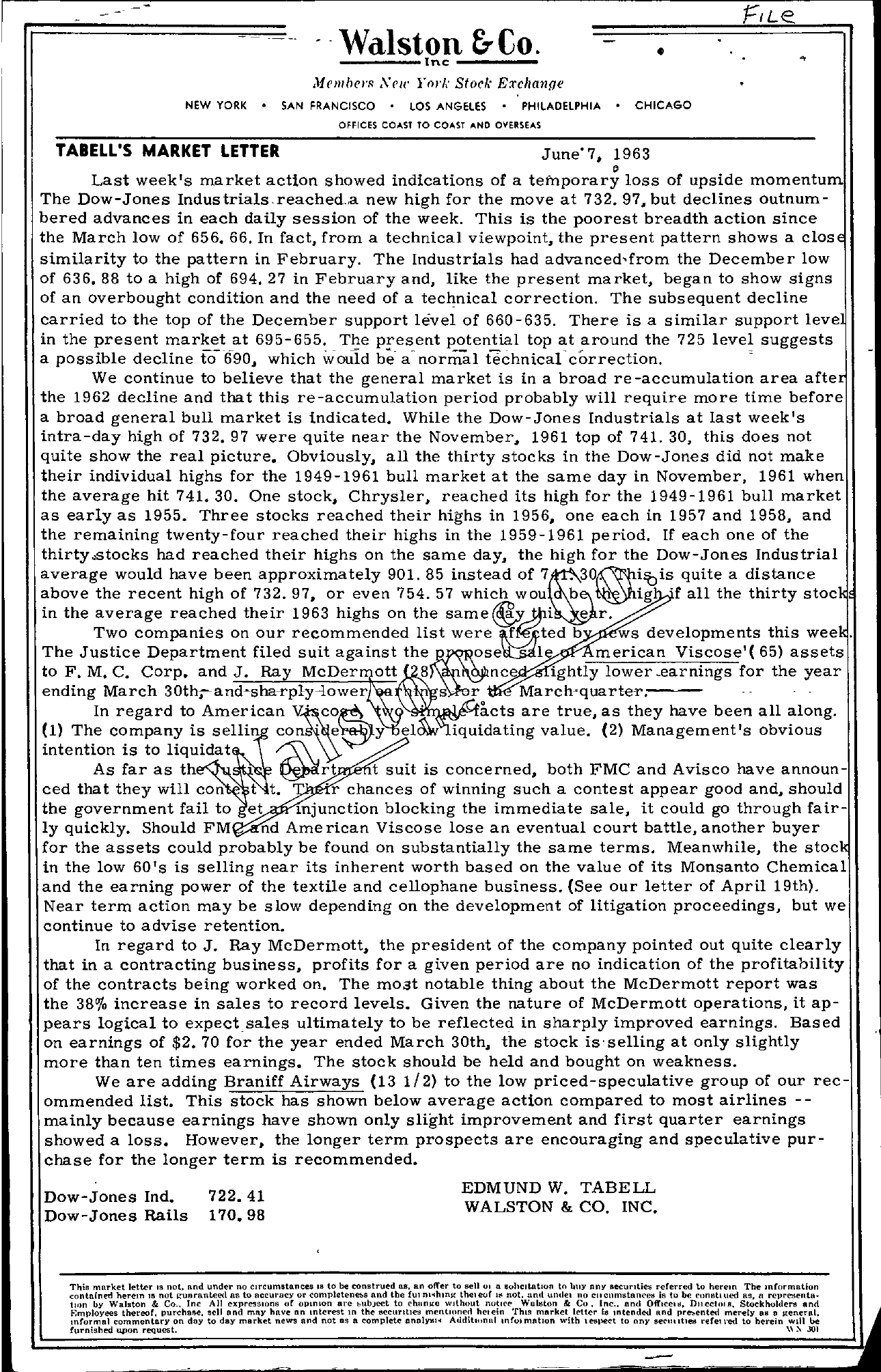 -.Walston &Co. —–Inc —– MCII/bel''' Xc/(' lol'k Slock Exchange NEW YORK SAN FRANCISCO LOS ANGELES PHILADELPHIA CHICAGO OFFICES COAST TO COAST AND OVERSEAS TABELL'S MARKET LETTER June'7, 1963 Last week's market action showed indications of a temporary loss of upside momentu The Dow-Jones Industrials.reached.,a new high for the move at 732.97, but declines outnum- bered advances in each daily session of the week. This is the poorest breadth action since the March low of 656. 66. In fact, from a technical viewpoint, the present pattern shows a clos similarity to the pattern in February. The Industrials had advanced,from the December low of 636.88 to a high of 694.27 in February and, like the present market, began to show signs of an overbought condition and the need of a technical correction. The subsequent decline carried to the top of the December support level of 660-635. There is a similar support in the present market at 695-655. The present potential top at around the 725 level suggests a possible decline fO-690, which woUld a normal technicafcorrection. 0 We continue to believe that the general market is in a broad re-accumulation area a the 1962 decline and that this re-accumulation period probably will require more time a broad general bull market is indicated. While the Dow-Jones Industrials at last week's intra-day high of 732.97 were quite near the November, 1961 top of 741. 30, this does not quite show the real picture. Obviously, all the thirty stocks in the Dow-Jones did not make their individual highs for the 1949-1961 bull market at the same day in November, 1961 when the average hit 741. 30. One stock, Chrysler, reached its high for the 1949-1961 bull market as early as 1955. Three stocks reached their highs in 1956, one each in 1957 and 1958, and the remaining twenty-four reached their highs in the 1959-1961 period. If each one of the thirty,stocks had reached their highs on the same day, the high for the Dow-Jones Industrial average would have been approximately 901. 85 instead of above the recent high of 732.97, or even 754. 57 which wou b quite a distance 'f all the thirty in the average reached their 1963 highs on the e r. Two companies on our recommended list were b ws developments this wp,pkl The Justice Department filed suit against merican Viscose'( 65) assets to F. M. C. Corp. and J. Ray McDer ending March nce ightly lower.earnings for the year . s' r Marchquarter. ..' . In regard to American (1) The company is sellin con . intention is to liquidat 0\. . acts are true, as they have been all along. el&.i iquidating value. (2) Management's obvious As far as th t suit is concerned, both FMC and Avisco have announ ced that they will con t t. 'r chances of winning such a contest appear good and, should the government fail to mjunction blocking the immediate sale, it could go through fa ly quickly. Should FM nd Ame rican Viscose lose an eventual court battle, another buyer for the assets could probably be found on substantially the same terms. Meanwhile, the stoc in the low 60's is selling near its inherent worth based on the value of its Monsanto Chemical and the earning power of the textile and cellophane business. (See our letter of April 19th). Near term action may be slow depending on the development of litigation proceedings, but we continue to advise retention. In regard to J. Ray McDermott, the president of the company pointed out quite clearly that in a contracting business, profits for a given period are no indication of the profitability of the contracts being worked on. The m03t notable thing about the McDermott report was the 38 increase in sales to record levels. Given the nature of McDermott operations, it ap- pears logical to expectsales ultimately to be reflected in sharply improved earnings. Based on earnings of 2. 70 for the year ended March 30th, the stock is'selling at only slightly more than ten times earnings. The stock should be held and bought On weakness. We are adding Braniff Airways (13 1/2) to the low priced-speculative group of our rec ommended list. This stock has shown below average action compared to most airlines — mainly because earnings have shown only slight improvement and first quarter earnings showed a loss. However, the longer term prospects are encouraging and speculative pur- chase for the longer term is recommended. Dow-Jones Ind. 722.41 Dow-Jones Rails 170.98 EDMUND W. TABELL WALSTON & CO. INC. This mnrket letter IS not, lind under no circumstances IS to be construed liB, an olTer to sell 01 Ii IwhcltntlOn to buy nny Becuflties referred to herein The m(nrmation contninerl hereIn 18 not guaranteed as to nCCUTncy or completene.s lind the fUl thelco( It' not. nnd no ell cnmstanl'elJ Is to be I',Jnshut'd as, n fepresenta- twn by Walston & Co. Inc All expressIOns or opmlon are bubJect to chnn)!c WIthout nutH'e Wullston &; Co, Inc.. and Dllectnl8. Stockholders and thereor. purchase. sell and may have an Interest In the I\eeurltles mentmnert helein ThiS market letter Is Intendetl nnd pre.entCti merely (UI a I!enerlli. mtormlll commentary on day to day market news and not as a complete Additmnni InfolmntlOn with leslloeC't to Dny 5eC'Ulltlet rdell'ed to hel'ein Will be furnished u,pon request. \\.. Jll