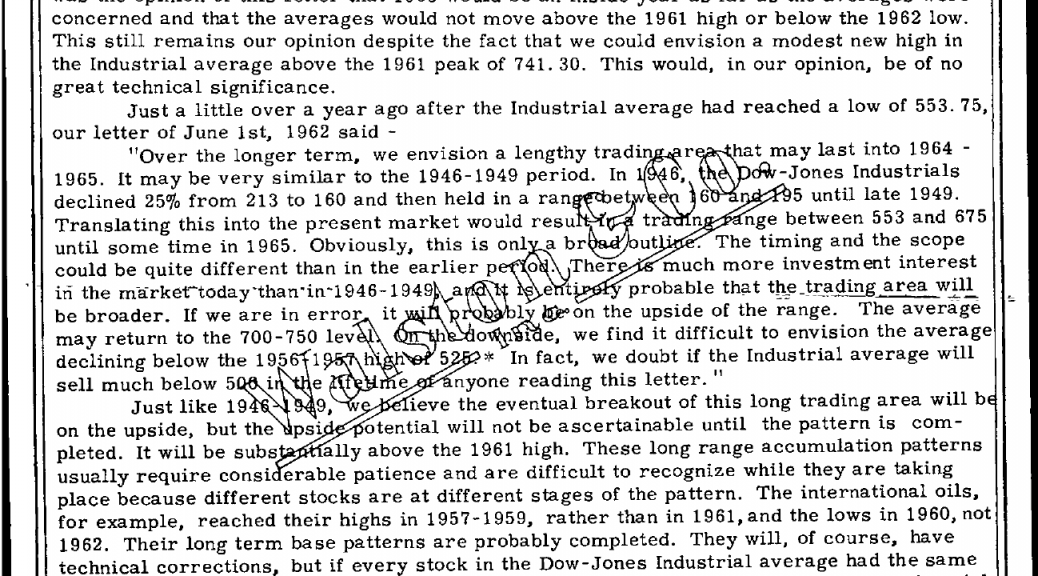 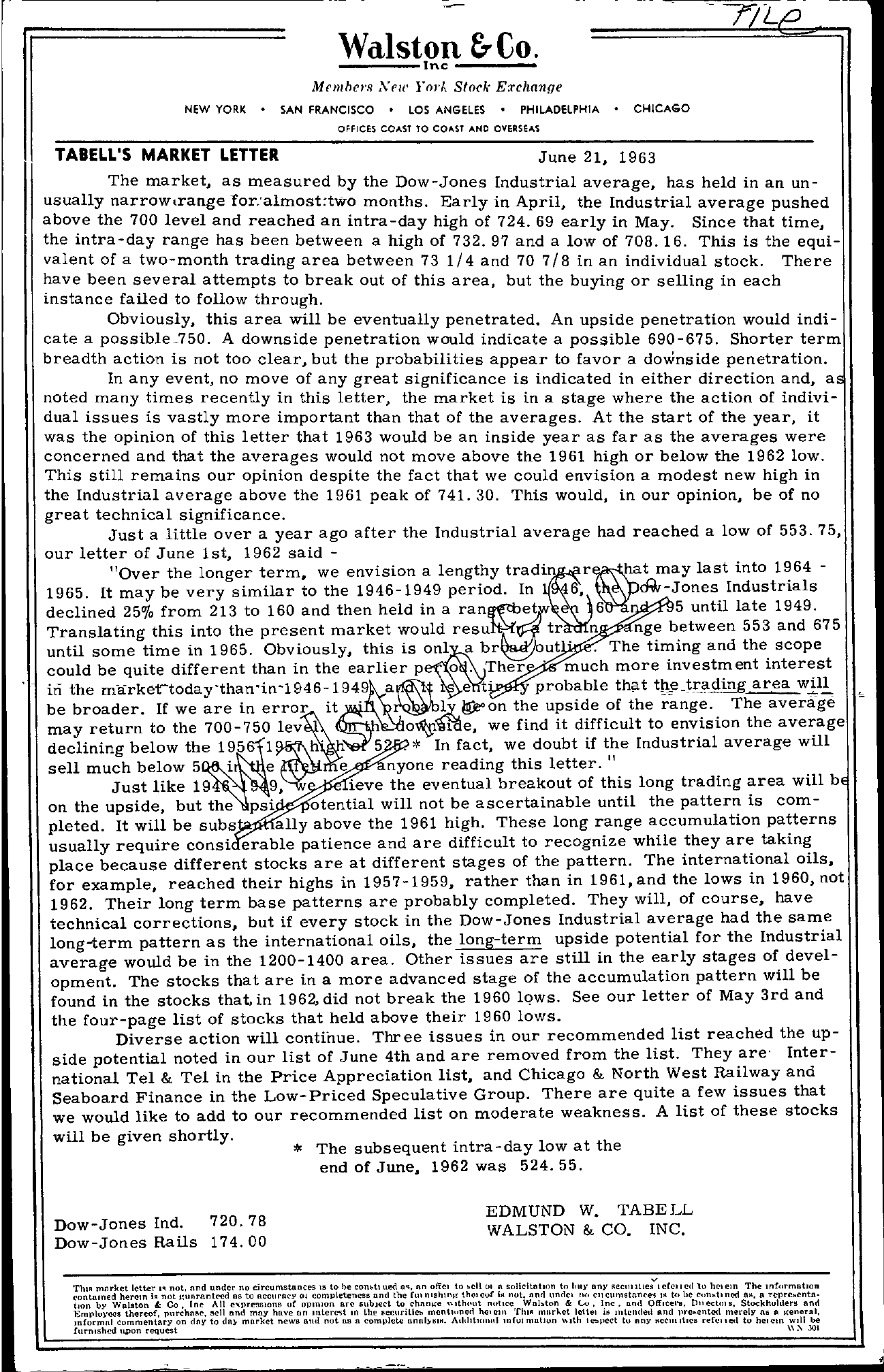 -7)L Walston &Co, —;'-Inc Member.. Xel/' rorh Stork ETCilange NEW YORK ' SAN FRANCISCO ' LOS ANGELES ' PHILADELPHIA ' OFFICES COAST TO COAST AND OVERseAS CHICAGO TABEll'S MARKET lETTER June 21, 1963 The market, as measured by the Dow-Jones Industrial average, has held in an un- usually narrow,range foralmosttwo months. Early in April, the Industrial average pushed the 700 level and reached an intra-day high of 724.69 early in May. Since that time, the mtra-day range has been between a high of 732.97 and a low of 708.16. This is the equi- valent of a two-month trading area between 73 1/4 and 70 7/8 in an individual stock. There have been several attempts to break out of this area, but the buying or selling in each instance failed to follow through. Obviously, this area will be eventually penetrated. An upside penetration would indi- cate a possible750. A downside penetration would indicate a possible 690-675. Shorter term breadth action is not too clear, but the probabilities appear to favor a downside penetration. In any event, no move of any great significance is indicated in either direction and, a noted many times recently in this letter, the market is in a stage where the action of indivi- dual issues is vastly more important than that of the averages. At the start of the year, it was the opinion of this letter that 1963 would be an inside year as far as the averages were concerned and that the averages would not move above the 1961 high or below the 1962 low. This still remains our opinion despite the fact that we could envision a modest new high in the Industrial average above the 1961 peak of 741. 30. This would, in our opinion, be of no great technical significance. Just a little over a year ago after the Industrial average had reached a low of 553.75, our letter of June 1st, 1962 said – Over the longer term, we envision a lengthy may last into 1964 – 1965. It may be very similar to the 1946-1949 period. In 6, ctW-Jones Industrials declined 25 from 213 to 160 and then held in a ran etllV 6 5 until late 1949. Translating this into the present market would tr n nge between 553 and 675 until some time in 1965. Obviously, this is a . The timing and the scope be quite different in the earlier po. . much more m the e t . probable that t!lJ'Jr.admg area wl,ll be broader. If we are in error it' the upside of the range. The average may return to the 700-750 declining below we find it difficult to envision the average . In fact, we doubt if the Industrial average will sell much below 5 i Just like 19 e 9, e nyone reading this letter. ieve the eventual breakout of this long trading area will b on the upside, but the psi otential will not be ascertainable until the pattern is com- pleted. It will be subs ally above the 1961 high. These long range accumulation patterns usually require consi erable patience and are difficult to recognize while they are taking place because different stocks are at different stages of the pattern. The international oils, for example, reached their highs in 1957-1959, rather than in 1961, and the lows in 1960, not 1962. Their long term base patterns are probably completed. They will, of course, have technical corrections, but if every stock in the Dow-Jones Industrial average had the same long4erm pattern as the international oils, the long-term upside potential for the Industrial average would be in the 1200-1400 area. Other issues are still in the early stages of devel- opment. The stocks that are in a more advanced stage of the accumulation pattern will be found in the stocks that. in 1962, did not break the 1960 lqws. See our letter of May 3rd and the four-page list of stocks that held above their 1960 lows. Diverse action will continue. Three issues in our recommended list reached the up- side potential noted in our list of June 4th and are removed from the list. They are' Inter- national Tel & Tel in the Price Appreciation list, and Chicago & North West Railway and Seaboard Finance in the Low- Priced Speculative Group. There are quite a few issues that we would like to add to our recommended list on moderate weakness. A list of these stocks will be given shortly. The subsequent intra-day low at the end of June, 1962 was 524.55. Dow-Jones Ind. 720.78 Dow-Jones Rails 174.00 EDMUND W. TABELL WALSTON & CO. INC. ThlR mnrket letter 1'1 not, nnd under no circumstnnces IS to be II'. an ofrC! to 01 n solicitl'lhnn to I'IIY IIny eCcl1 cd tu hel em The wformobon ('ontmned herem is n()t 1-\lRranteed as to accuracy 01 completeness oncl the rm nu,hulJ,! thel cor ill not. nnd l1n(lCi 110 ell Clltnstnn('(; II! to be contlllro till, n rcprccnta- tlon by Wnhlton & Co. Inc All expressions uf oPInIOn are flubJcct to chnnJ.,(c \Hth,'ut notice Wnbton & Co Inc and Offlcel!! Dl1cctms Stockholders and 1-mployees thereof, purchnlle, sell and may have an mteret In the lIecliritiClo mentiuned helel1\ ThiS mnrJ..et iN alld m'erelY a J.,(encral mfurmnl commentary on day to dnl' market news 811t1 nol as n complete annbslN. A.lthtlUllullllfuin18tlun …. Ith Ie.pcct tu any lIe('Ullhcs refClleti to helcm will !urlllshcd \i,Pon request \\-. 301 , 'I