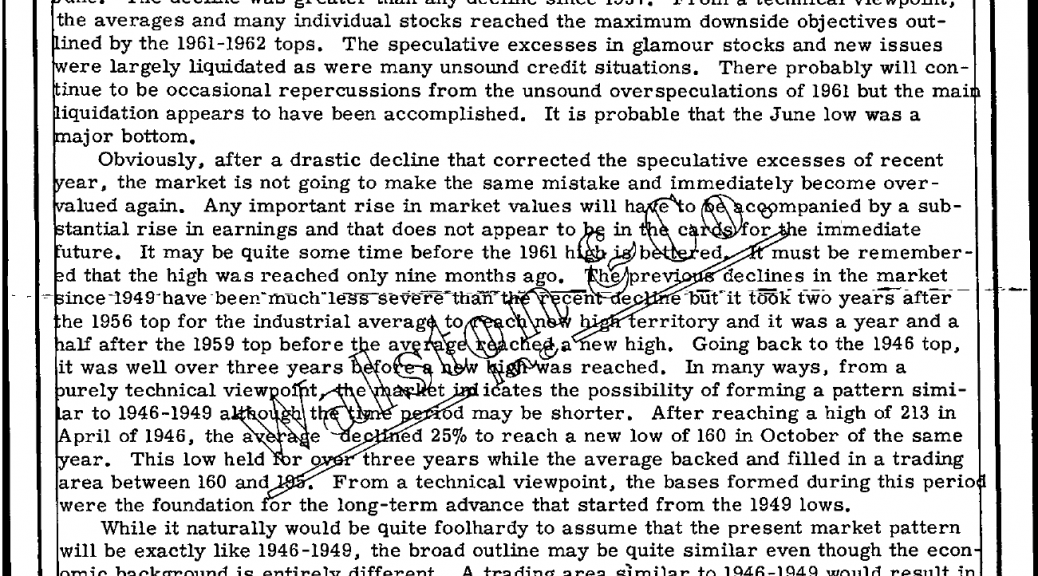 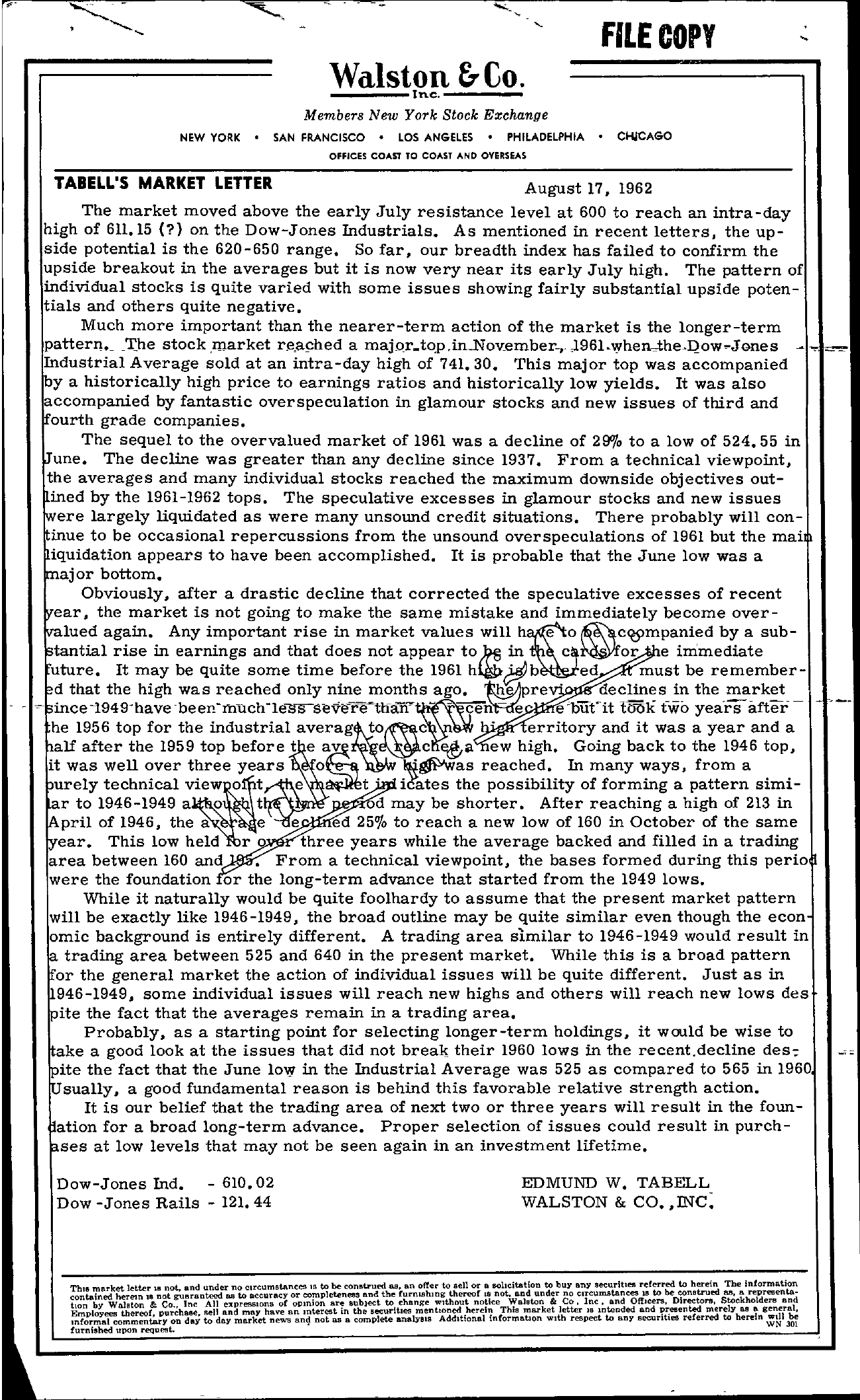 FILE COpy Walston &Co. Inc. Members New York Stock Exchange NEW YORK SAN FRANCISCO LOS ANGELES PHILADELPHIA CH.lCAGO OFFICES COAST TO COAST AND OVERSEAS TABELL'S MARKET LETTER August 17. 1962 The market moved above the early July resistance level at 600 to reach an intra-day high of 611.15 () on the Dow-Jones Industrials. As mentioned in recent letters. the up- potential is the 620-650 range. So far. our breadth index has failed to confirm the lu,lsi.de breakout in the averages but it is now very near its early July high. The pattern Imal'I71C1UaLl stocks is quite varied with some issues showing fairly substantial upside potenlcU;) and others quite negative. Much more important than the nearer-term action of the market is the longer-term T.he stock ,market re.ached a major.top .in.November u.r.la Average sold at an intra-day high of 741.30. This major top was accompanied a historically high price to earnings ratios and historically low yields. It was also by fantastic overspeculation in glamour stocks and new issues of third and grade companies. The sequel to the overvalued market of 1961 was a decline of 290/0 to a low of 524.55 in The decline was greater than any decline since 1937. From a technical viewpoint. e averages and many individual stocks reached the maximum downside objectives out- Ilinled by the 1961-1962 tops. The speculative excesses in glamour stocks and new issues IWf'rl largely liquidated as were many unsound credit situations. There probably will con- I'lilue to be occasional repercussions from the unsound overspeculations of 1961 but the IHeU'l' appears to have been accomplished. It is probable that the June low was a or bottom. Obviously. after a drastic decline that corrected the speculative excesses of recent the market is not going to make the same mistake and immediately become over- again. Any important rise in market values will hO by a sub- ItantiaLl rise in earnings and that does not appear to in c e irnmediate It may be quite some time before the 1961 ed must be remember- tlfffi2-that the high was reached only nine months 't.hWlPre . the e'out-it took two years after 1956 top for the industrial . erritoryand it was a year and a after the 1959 top before t e ew high. Going back to the 1946 toP. was well over three years 0 reached. In many ways. from a technical 0t e t' icates the possibility of forming a pattern simi- to 1946-1949 a 0 t d may be shorter. After reaching a high of 213 in pril of 1946. the a e e ed 250/0 to reach a new low of 160 in October of the same This low held r three years while the average backed and filled in a trading between 160 and From a technical viewpoint. the bases formed during this U..'U1 the foundation or the long-term advance that started from the 1949 lows. While it naturally would be quite foolhardy to assume that the present market pattern be exactly like 1946-1949. the broad outline may be quite similar even though the ec(m-i IUl1l1; background is entirely different. A trading area similar to 1946-1949 would result in trading area between 525 and 640 in the present market. While this is a broad pattern the general market the action of individual issues will be quite different. Just as in 6-1949. some individual issues will reach new highs and others will reach new lows des ite the fact that the averages remain in a trading area. Probably. as a starting point for selecting longer-term holdings. it would be wise to a good look at the issues that did not their 1960 lows in the recent.decline the fact that the June low in the Industrial Average was 525 as compared to 565 in 1 sually. a good fundamental reason is behind this favorable relative strength action. It is our belief that the trading area of next two or three years will result in the foun- I',,UH for a broad long-term advance. Proper selection of issues could result in purch- s at low levels that may not be seen again in an investment lifetime. Dow-Jones Ind. – 610.02 Dow -Jones Rails – 121.44 EDMUND W. TABELL WALSTON & CO. ,INC. Thill market letter 111 not and under no cIrcumstances IS to be construed as, an ot'fe!;' to sell or a solicitation to buy any securities referred to herein The Information contained herem 111 not as to accuracy or completeness and the furnlshmg thereof 18 not, a.nd under no clreumstanees 18 to be construed M. a represent&.- t by WAlston & Co Inc All expressIOns of opmion are subJect to change wlthout notice Walston & Co, Inc, and Officers, Directors, Stockholders and thereof sell And may have an mterest in the securitIes mentIOned herein This market letter IS mtended and presented merely as a general, mformal commentM-y on day to day market news an4 not as a complete analySIS Additional informatlon With respect to any securities referred to herein furnished upon requeat.