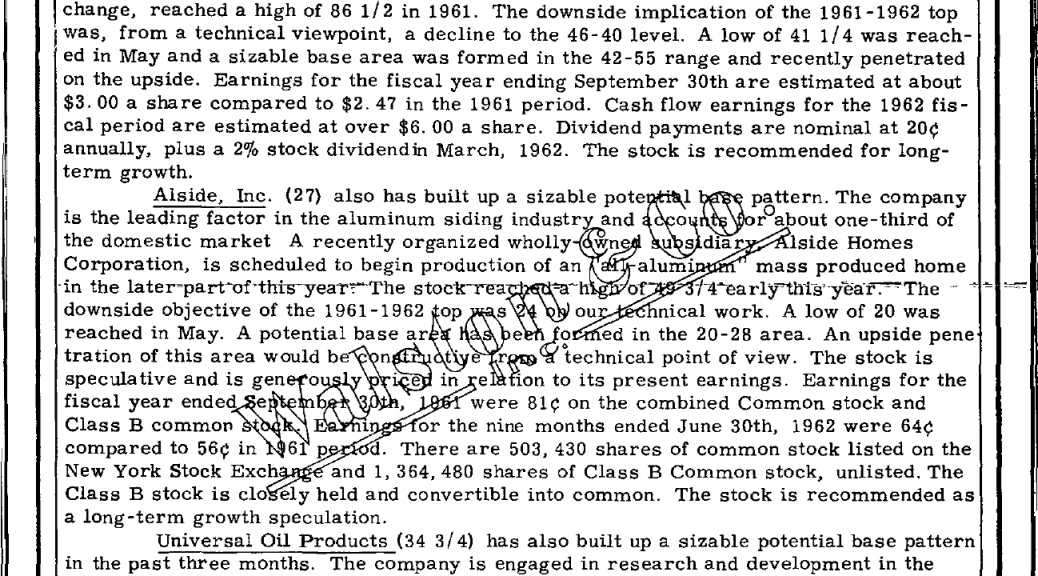 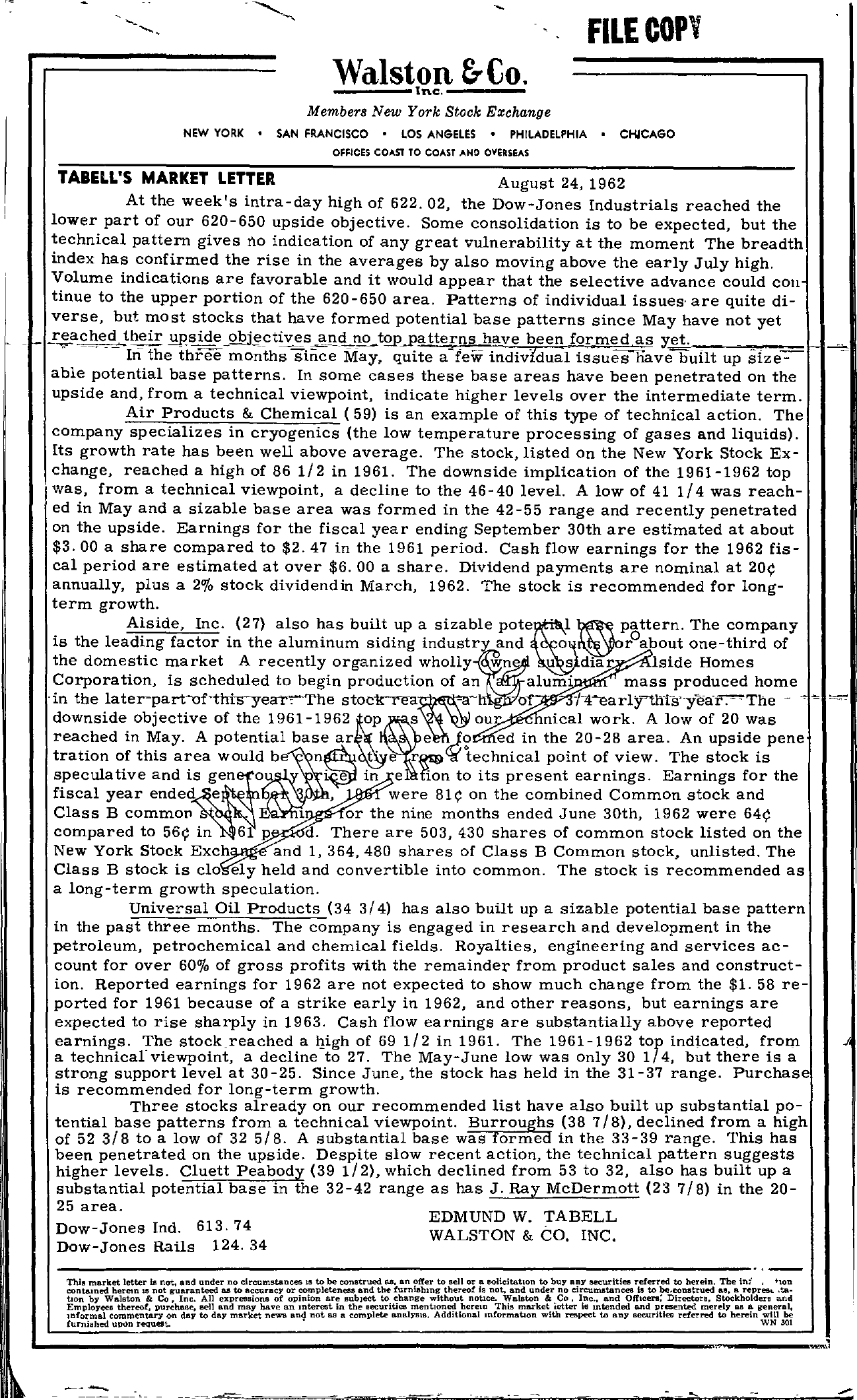 FILE COP' Walston &Co. I nc. Members New York Stock Exchange NEW YORK SAN FRANCISCO LOS ANGELES PHILADELPHIA CHICAGO OFFICES COAST TO COAST AND OVERSEAS TABELL'S MARKET LETTER August 24, 1962 At the week's intra-day high of 622.02, the Dow-Jones Industrials reached the lower part of our 620-650 upside objective. Some consolidation is to be expected, but the technical pattern gives no indication of any great vulnerability at the moment The breadth index has confirmed the rise in the averages by also moving above the early July high. Volume indications are favorable and it would appear that the selective advance could COil tinue to the upper portion of the 620-650 area. Patterns of individual issues are quite di- verse, but most stocks that have formed potential base patterns since May have not yet Iached their have been formed as .. . ' In the three months since May, quite a-few individual issues have built up size- able potential base patterns. In some cases these base areas have been penetrated on the upside and, from a technical viewpoint, indicate higher levels over the intermediate term. Air Products & Chemical (59) is an example of this type of technical action. The company speCializes in cryogenics (the low temperature proceSSing of gases and liquids). Its growth rate has been well above average. The stock, listed on the New York Stock Ex- change, reached a high of 861/2 in 1961. The downside implication of the 1961-1962 top was, from a technical viewpoint, a decline to the 46-40 level. A low of 41 1/4 was reach- ed in May and a sizable base area was formed in the 42-55 range and recently penetrated on the upside. Earnings for the fiscal year ending September 30th are estimated at about 3.00 a share compared to 2.47 in the 1961 period. Cash flow earnings for the 1962 fis- cal period are estimated at over 6.00 a share. Dividend payments are nominal at annually, plus a 2 stock dividend in March, 1962. The stock is recommended for longterm growth. Alside, Inc. (27) also has built up a sizable potel is the leading factor in the aluminum siding industry and 0 pattern. The company one-third of the domestic market A recently organized u s diar lside Homes Corporation, is scheduled to begin production of an alumi mass produced home 'in the laterpartJf'this yea'l'The -11 – … downside objective of the reached in May. A potential base ar work. A low of 20 was e iJe; ed in the 20-28 area. An upside pene tration of this area nA t' e technical point of view. The stock is speculative and is 0 in e non to its present earnings. Earnings for the fiscal year Class B common tl.' ..1 , were 81 on the combined Common stock and 1 or the nine months ended June 30th, 1962 were compared to in\)611 R O. There are 503,430 shares of common stock listed on the New York Stock Exch and 1, 364,480 shares of Class B Common stock, unlisted. The Class B stock is cIo ely held and convertible into common. The stock is recommended as a long-term growth speculation. Universal Oil Products (34 3/4) has also built up a sizable potential base pattern in the past three months. The company is engaged in research and development in the petroleum, petrochemical and chemical fields. Royalties, engineering and services ac- count for over 600/0 of gross profits with the remainder from product sales and construct- ion. Reported earnings for 1962 are not expected to show much change from the 1. 58 re- ported for 1961 because of a strike early in 1962, and other reasons, but earnings are expected to rise sharply in 1963. Cash flow earnings are substantially above reported torearnings. The stock,reached a I!igh of 691/2 in 1961. The 1961-1962 indicatei, from a technical' viewpoint, a decline to 27. The May-June low was only 30 1 4, but there is a strong support level at 30-25. Since June, the stock has held in the 31-37 range. Purchase is recommended for long-term growth. Three stocks already on our recommended list have also built up substantial potential base patterns from a technical viewpoint. Burroughs (38 7/8), declined from a high of 523/8 to a low of 325/8. A substantial base was formed in the 33-39 range. This has been penetrated on the upside. Despite slow recent action, the technical pattern suggests higher levels. Cluett Peabody (39 1/2), which declined from 53 to 32, also has built up a substantial potential base in the 32-42 range as has J. Ray McDermott (237/8) in the 20- 25 area. EDMUND W. TABELL Dow-Jones Ind. 613.74 WALSTON & CO. INC. Dow-Jones Rails 124. 34 ———————————————————–.. —Thill market letter is not, and under no circumstances III to be construed 1lS, an offer to sell or a solicitation to buy any securities referred to herein. The Ini . lon contained herein 111 not guaranteed u. to accuracy or completeness and the furnishmg thereof is not, and under no ill to be.conlltrued all, a reprea…ta- tlon by Walston & Co, Inc. All expressions of opinion are subJect to c;hange without notice. Walston &.Co, Inc., and OffiCers; Directors, Stockholders and Employees thereof, purehasc, sell and may have an mOOrest in the securities mentioned herem This market letter ie mtended and presented mer!!ly as a general, mformal commentary on day to day market news anlj not as a complete analYlliB. Additional mformatlon with respect to any securities referred to herein will be furnishl!d UK)n request. WN 301 L