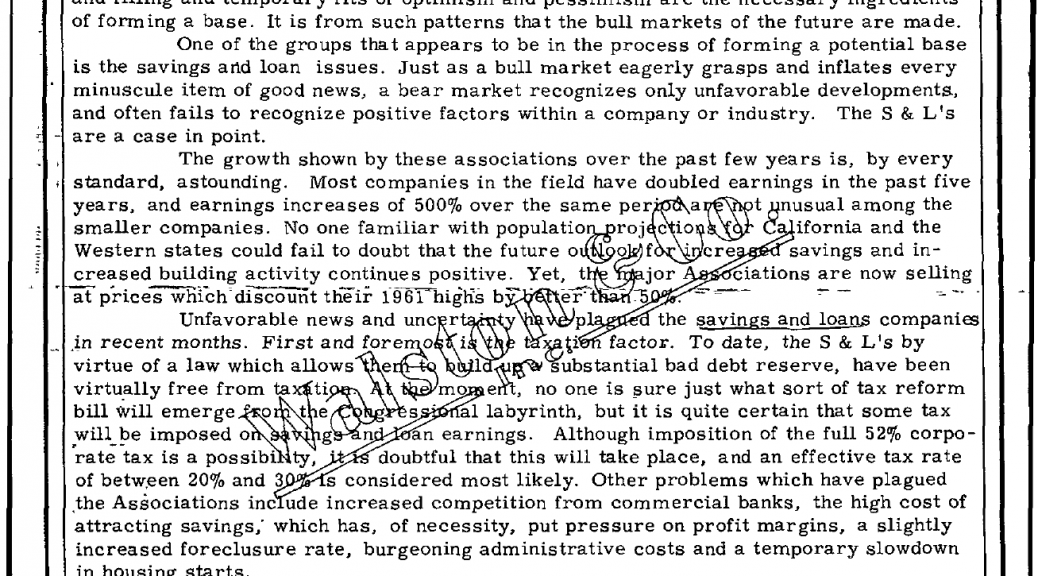 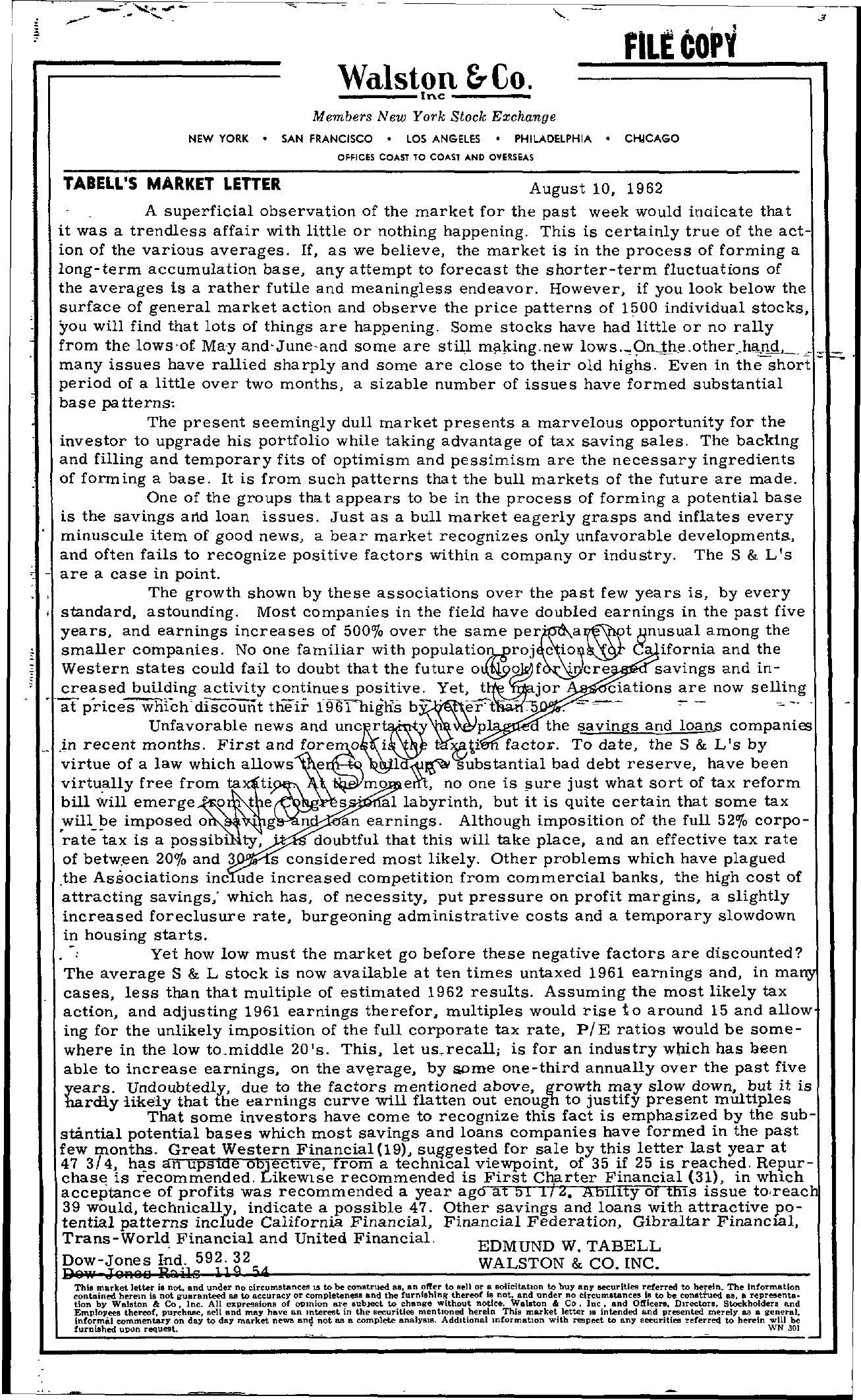 Walston &CO, —-Inc —– Members New York Stock Exchange . COpy NEW YORK ' SAN fRANCISCO LOS ANGELES ' PHILADELPHIA ' CH.lCAGO OFFICES COAST TO COAST AND OVERSEAS TABELL'S MARKET LETTER August 10, 1962 A superficial observation of the market for the past week would inaicate that it was a trendless affair with little or nothing happening. This is certainly true of the act- ion of the various averages. If, as we believe, the market is in the process of forming a long-term accumulation base, any attempt to forecast the shorter-term fluctuations of the averages is a rather futile and meaningless endeavor. However, if you look below the surface of general market action and observe the price patterns of 1500 individual stocks, you will find that lots of things are happening. Some stocks have had little or no rally from the lows'of May andJune-and some are still miJ.jdng.new 10ws.Ontheother.,ha.nd, many issues have rallied sharply and some are close to their old highs. Even in theshort- period of a little over two months, a sizable number of issues have formed substantial base pa tterns The present seemingly dull market presents a marvelous opportunity for the investor to upgrade his portfolio while taking advantage of tax saving sales. The backing and filling and temporary fits of optimism and pessimism are the necessary ingredients of forming a base. It is from such patterns that the bull markets of the future are made. One of the groups tha t appears to be in the process of forming a potential base is the savings and loan issues. Just as a bull market eagerly grasps and inflates every minuscule item of good news, a bear market recognizes only unfavorable developments., and often fails to recognize positive factors within a company or industry. The S & L's are a case in point. The growth shown by these associations over the past few years is, by every j standard, astounding. Most companies in the field have doubled earnings in the past five years, and earnings increases of 500 over the same smaller companies. No one familiar with Rnusual among the c io lls..'!9t Ca ifornia and the Western states could fail to doubt that the future . cre savings and in- . at pnces whlCh dIscount theIr 1961 higns jor 0 . – – now , ,- Unfavorable news and p the savings and loans companies .in recent months. First and fore 0 i t factor. To date, the S & L's by virtue of a law which I substantial bad debt reserve, have been virtually free from ta en't, no one is sure just what sort of tax reform bill will emerge 0 t e s' al labyrinth, but it is quite certain that some tax will be imposed 0 g n an earnings. Although imposition of the full 52 corpo- 'rat;'tax is a possibi ty, doubtful that this will take place, and an effective tax rate of betw.een 20 and 3 s considered most likely. Other problems which have plagued ,the Associations inc ude increased competition from commercial banks, the high cost of attracting savings; which has, of necessity, put pressure on profit margins, a slightly increased forec1usure rate, burgeoning administrative costs and a temporary slowdown in housing starts. – Yet how low must the market go before these negative factors are discounted The average S & L stock is now available at ten times untaxed 1961 earnings and, in rna cases, less than that multiple of estimated 1962 results. Assuming the most likely tax action, and adjusting 1961 earnings therefor, multiples would rise to around 15 and allow ing for the unlikely imposition of the full corporate tax rate, PiE ratios would be some- where in the low tomiddle 20 'so This, let usrecall; is for an indblstry which has been able to increase earnings, on the by some one-third annually over the past five years. Undoubtedly, due to the factors mentioned above, rowth may slow down, but it is hardly likely that the earnings curve Will flatten out enougll to justify present multiples That some investors have come to recognize this fact is emphasized by the sub- stantial potential bases which most savings and loans companies have formed in the past few months. Great Western Financial (19), suggested for sale by this letter last year at 47 3/4, has an upsIde oOJecnve, from a techmcal viewpoint, of 35 if 25 is reached. Relurchase is recommended. LikeWIse recommended is First Charter Financial (31), in WhICh acceptance of profits was recommended a year ago at 51 1/ 2, Ablutyof thIS issue to.reac 39 would, technically, indicate a possible 47. Other savings and loans with attractive po- tential patterns include California Financial, Financial Federation, Gibraltar FinanCIal, Trans-World Financial and United Financial. Dow-Jones Ind. 592. 32 .. JeRQ8 Ra;i.;ls 119 54 EDMUND W. TABELL WALSTON & CO. INC. ThIB market letter is not., and under no circumstances 15 to be eonstrued as. an offer to sell or a solicitation to buy any aecurities referred to herein. The information contained herem is not guaranteed 8.B to accuracy or completeness and the furnishlnR' thereof is not, and under no circumstances le to be construed as. a representa tlon by Walston &; Co. Inc. All expressions of OPinion are subJect to change without notice. Walston & Co. Inc. and Officers. Directors. Stockholders and Employees thereof, purchase. sell and may have an Interest in the securities mentIoned herein This market letter IB intended and presented merely as a general. informal commenta.ry on day to day market neW!! and not as a complete analYBIB. Additional mformatlon with respect to any Becurities referred to herein wUl be furnished upon r e q u e s t . ' WN 301