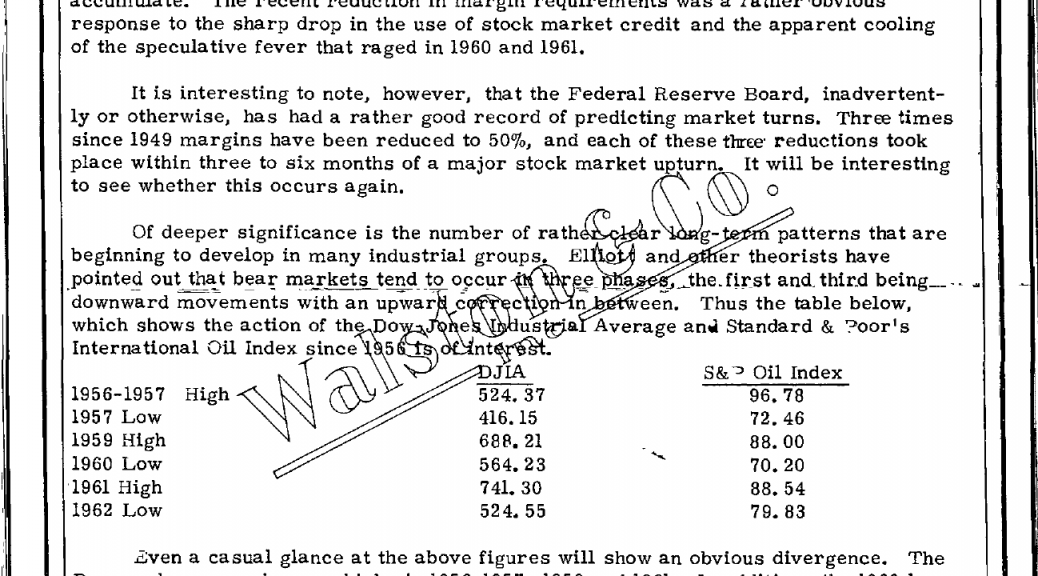 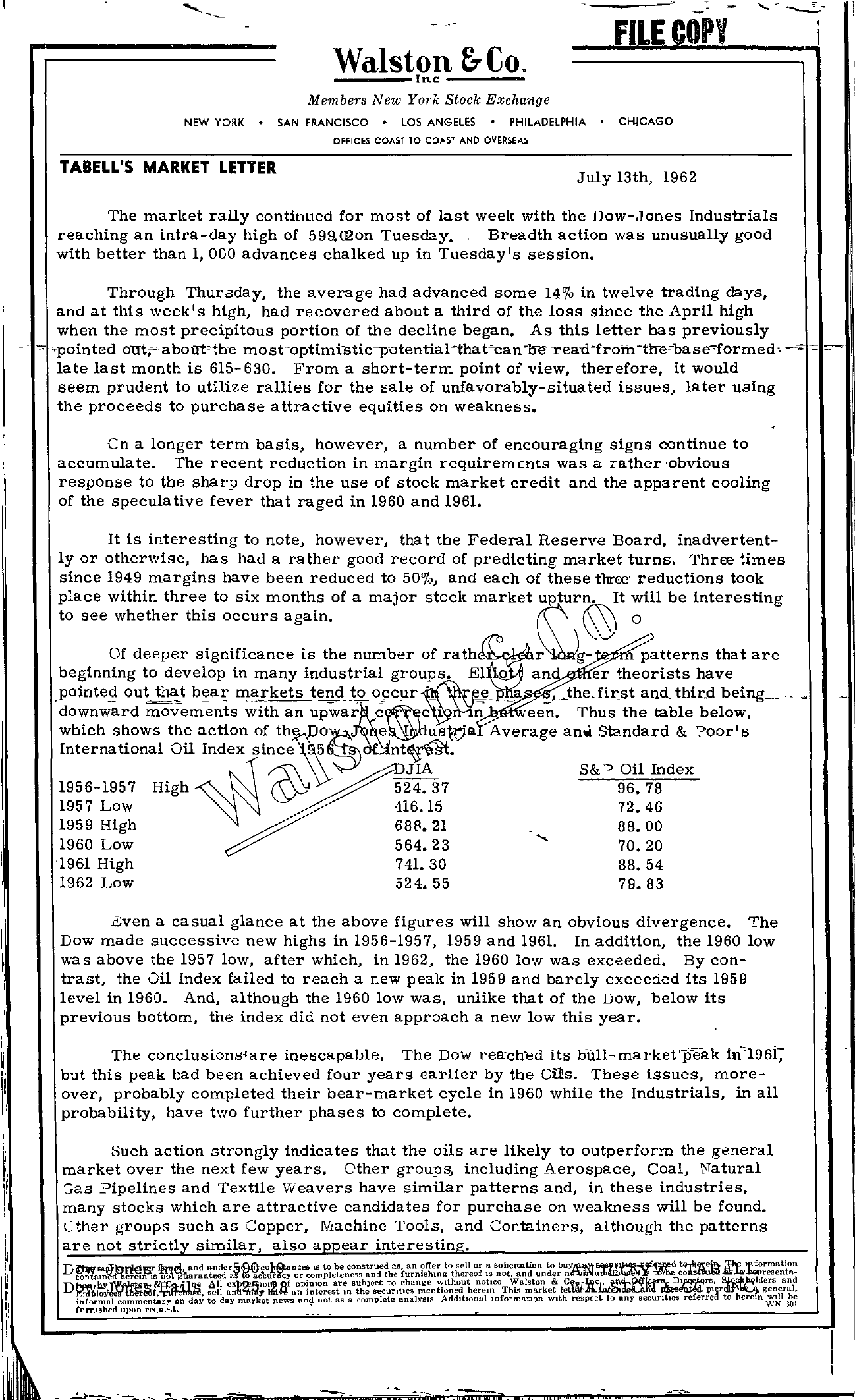 Walston &Co. Inc – – – – – FLE COpy Members New York Stock Exchange NEW YORK SAN FRANCISCO LOS ANGELES PHILADELPHIA CHlCAGO OFFICES COAST TO COAST AND OVERSEAS TABELL'S MARKET LETTER July 13th, 1962 The market rally continued for most of last week with the Dow-Jones Industrials reaching an intra-day high of 599.(J2on Tuesday. Breadth action was unusually good with better than 1, 000 advances chalked up in Tuesday's session. Through Thursday, the average had advanced some 14 in twelve trading days, and at this week's high, had recovered about a third of the loss since the April high when the most precipitous portion of the decline began. As this letter has previously .pointed out;'-aboutzthe -'0 – – ' late last month is 615-630. From a short-term point of view, therefore, it would seem prudent to utilize rallies for the sale of unfavorably-situated issues, later using the proceeds to purchase attractive equities on weakness. en a longer term basis, however, a number of encouraging signs continue to accumulate. The recent reduction in margin requirements was a rather 'obvious response to the sharp drop in the use of stock market credit and the apparent cooling of the speculative fever that raged in 1960 and 1961. It is interesting to note, however, that the Federal Reserve Board, inadvertent- ly or otherwise, has had a rather good record of predicting market turns. ThrEe times since 1949 margins have been reduced to 50, and each of these thrEe' reductions took place within three to six months of a major stock market upturn. It will be interesting 'to see whether this occurs again. (\' 0 Of deeper significance is the number of patterns that are beginning to develop in many industrial groups. and er theorists have ,pointesl out and.third being downward movements with an een. Thus the table below, which shows the action of DO; Average an.. Standard & ryoor's International Oil Index since 5 0\ 1956-1957 High W JiA 524.37 S& -oJ Oil Index 96.78 1957 Low 416.15 72.46 1959 High 68B.2l 88.00 1960 Low 564.23….. 70.20 1961 High 741. 30 88. 54 1962 Low 524.55 79.83 i;ven a casual glance at the above figures will show an obvious divergence. The Dow made successive new highs in 1956-1957, 1959 and 1961. In addition, the 1960 low was above the 1957 low, after which, in 1962, the 1960 low was exceeded. By contrast, the Oil Index failed to reach a new peak in 1959 and barely exceeded its 1959 level in 1960. And, although the 1960 low was, unlike that of the DOW, below its previous bottom, the index did not even approach a new low this year. The conc1usions'are inescapable. The Dow reach-ed its \j-ull-market p-eak but this peak had been achieved four years earlier by the Gils. These issues, moreover, probably completed their bear-market cycle in 1960 while the Industrials, in all probability, have two further phases to complete. I J, I i I' I,''I, Such action strongly indicates that the oils are likely to outperform the general market over the next few years. Other groups, including Aerospace, Coal, Natural 'I ;as ipelines and Textile have similar patterns and, in these industries, many stocks which are attractive candidates for purchase on weakness will be found. ether groups such as Copper, lViachine Tools, and Containers, although the patterns are not strictly similar, also appear interesting. ilAd, and lHlder3&Wircul;ances IS to be construed as. an ffer to sell or a 50hCltation to .,formation nol K6aranteed as or and the furnlehmR' thereof IS not, o.nd under coAstl!uliJ!Ji.1i).RIJopresento.- All cxbQSiilO11J f!f opinIon are euhJcct to change ,,!Ithout notice '\Yaiston & ChrUlCI' sw.qtpq1ders and sell o.n interest m the securitIes mentIOned herem ThiS market general. on day to day market news amJ not as a complete Additional mformatlOn With respect to any eecurltu!s rcferrc to herein furmshed upon request.