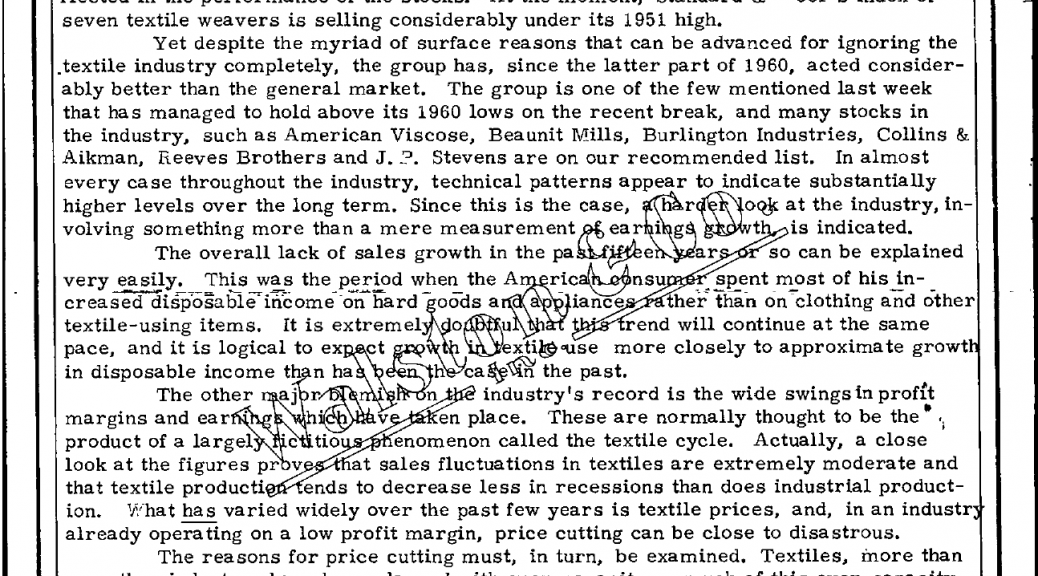 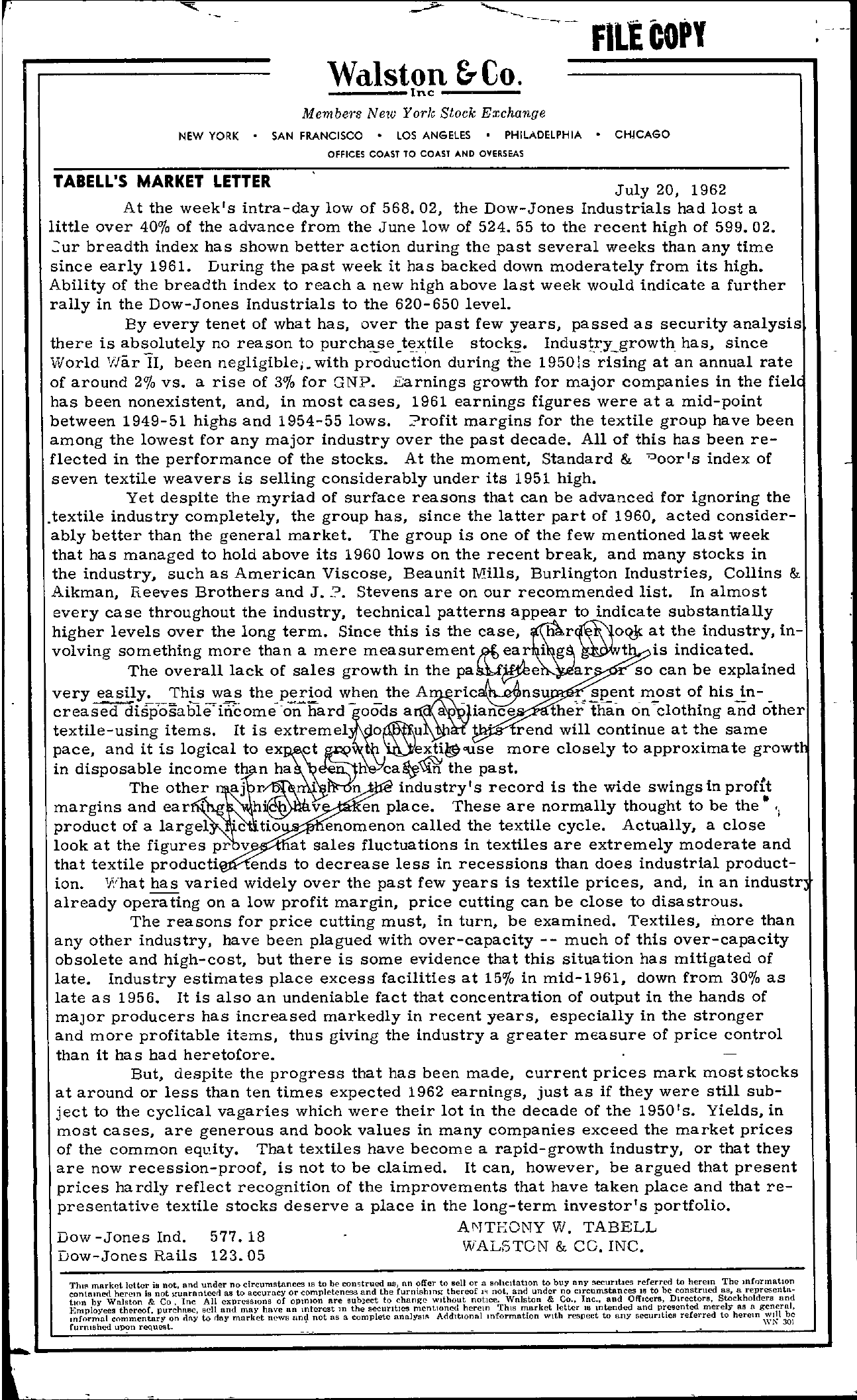 Walston &- Co. flLtcOPy Members New York Stock Exchange NEW YORK SAN FRANCISCO LOS ANGELES PHILADELPHIA CHICAGO OFFICES COAST TO COAST AND OVERSEAS TABELL'S MARKET LETTER July 20, 1962 At the week's intra-day low of 568.02, the Dow-Jones Industrials had lost a little over 400/0 of the advance from the June low of 524. 55 to the recent high of 599.02. 'ur breadth index has shown better action during the past several weeks than any time since early 1961. During the past week it has backed down moderately from its high. Ability of the breadth index to reach a new high above last week would indicate a further rally in the Dow-Jones Industrials to the 620-650 level. By every tenet of what has, over the past few years, passed as security analysis there is no reason to purchase .textile stocks. Industrygrowth has, since \!\forld 'lIar II, been negligible;. with production during the 1950is rising at an annual rate of around 20/0 vs. a rise of 30/0 for GNP. Earnings growth for major companies in the fielc has been nonexistent, and, in most cases, 1961 earnings figures were at a mid-point between 1949-51 highs and 1954-55 lows. rofit margins for the textile group have been among the lowest for any major industry over the past decade. All of this has been re- flected in the performance of the stocks. At the moment, Standard & Door's index of seven textile weavers is selling considerably under its 1951 high. Yet despite the myriad of surface reasons that can be advanced for ignoring the .textile industry completely, the group has, since the latter part of 1960, acted consider- ably better than the general market. The group is one of the few mentioned last week that has managed to hold above its 1960 lows on the recent break, and many stocks in the industry, such as American Viscose, Beaunit \/fills, Burlington Industries, Collins & Aikman, Reeves Brothers and J. J. Stevens are on our recommended list. In almost every case throughout the industry, technical patterns appear to indicate substantially higher levels over the long term. Since this is the case, at the industry, in- volving something more than a mere measurementtear i g is indicated. The overall lack of sales growth in the ar so can be explained very the .most of his in- . creased diSposable-iticomeon hardiOdS a a iance ther than on clothing and other textile-using items. It is extremel .rend will continue at the same pace, and it is logical to more closely to approximate growth in disposable income thJ;l-n ha II the past. The other n n industry's record is the wide swings in proft margins and ear.;\. en place. These are normally thought to be the' product of a enomenon called the textile cycle. Actually, a close look at the figures prbv at sales fluctuations in textiles are extremely moderate and that textile producti ends to decrease less in recessions than does industrial product- ion. 1f.'hat has varied widely over the past few years is textile prices, and, in an industr already operating on a low profit margin, price cutting can be close to disastrous. The reasons for price cutting must, in turn, be examined. Textiles, more than any other industry, have been plagued with over-capacity — much of this over-capacity obsolete and high-cost, but there is some evidence that this situation has mitigated of late. Industry estimates place excess facilities at 150/0 in mid-1961, down from 300/0 as late as 1956. It is also an undeniable fact that concentration of output in the hands of major producers has increased markedly in recent years, especially in the stronger and more profitable items, thus giving the industry a greater measure of price control than it has had heretofore. – But, despite the progress that has been made, current prices mark most stocks at around or less than ten times expected 1962 earnings, just as if they were still sub- ject to the cyclical vagaries which were their lot in the decade of the 1950's. Yields, in most cases, are generous and book values in many companies exceed the market prices of the common eqdty. That textiles have become a rapid-growth industry, or that they are now recession-proof, is not to be claimed. It can, however, be argued that present prices hardly reflect recognition of the improvements that have taken place and that re- presentative textile stocks deserve a place in the long-term investor's portfolio. Dow -Jones Ind. 577. 18 Dow-Jones Rails 123.05 ANTEONY W. TABELL WALSTON & CO. INC. market letter is not, and under no circumstances IS to be as, nn ficr to sell or a solICitation to buy any secUritIes referred to herem The mCormatton contamoo herem is not as to accuracy or completeness and the (urmshml thereof not, and under no circumstances IS to be construed as, a representn.- twn by Walston & Co , Inc All expressions of oplOwn are subcct to change Without notIce. Wnlston & Co., Inc., and Officers, Directors, Stockholders and thereof, purchase, sell and may have an mterest 10 the secUritieS ment.lOned herein ThiS letter IS Intended and pr,csented merely as a gencrnl, Informal commentary on dny to day market news Ind not ns a complete analYllIR AdditIOnal InformntlOn With respect to any securities rderred to herem Will be furnished upon r e q u C I I L ' WI\' 30) –