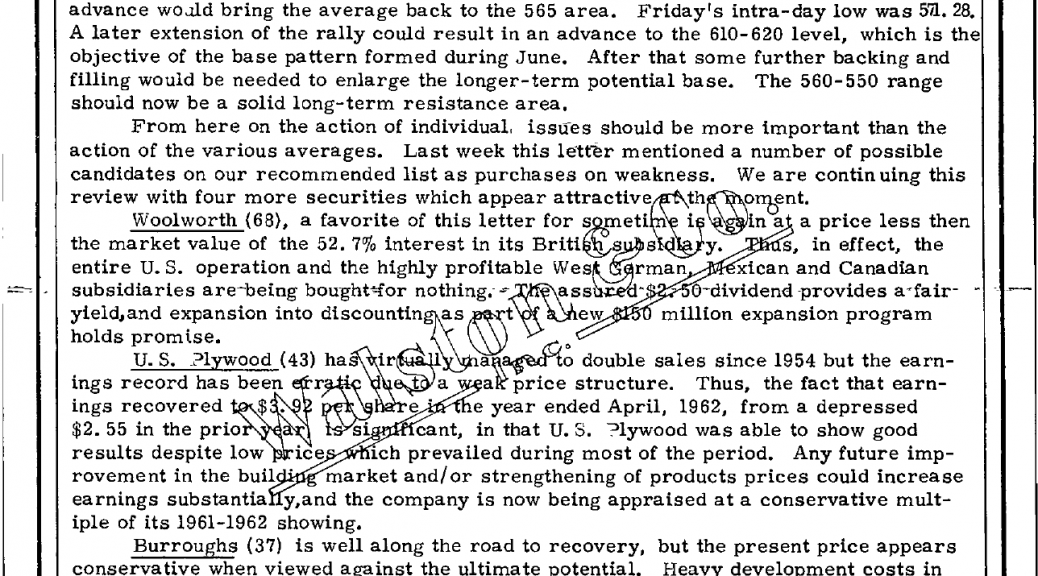 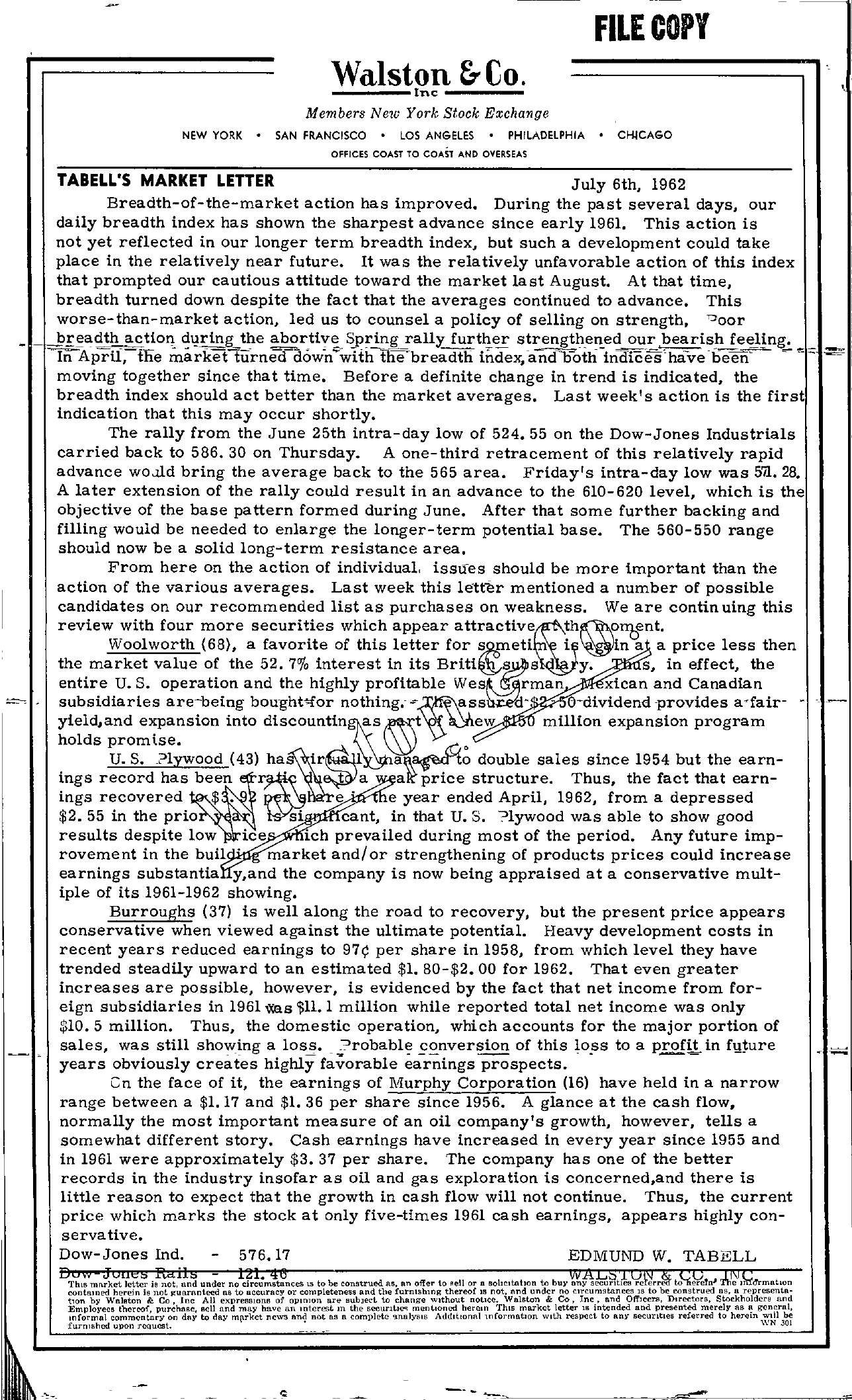 FILE COpy Walston- Inc &- Co. \, Members New York Stock Exchange NEW YORK SAN FRANCISCO LOS ANGELES PHILADELPHIA CHlCAGO OFFICES COAST TO COAST AND OVERSEAS TABELL'S MARKET LETTER July 6th, 1962 Breadth-of-the-market action has improved. During the past several days, our daily breadth index has shown the sharpest advance since early 1961. This action is not yet reflected in our longer term breadth index, but such a development could take place in the relatively near future. It was the relatively unfavorable action of this index that prompted our cautious attitude toward the market last August. At that time, breadth turned down despite the fact that the averages continued to advance. This worse-than-market action, led us to counsel a policy of selling on strength, Door action the abortive Spring rallY' further strengthened our bearish fee.ing. , InApril, the market turned-a6w-n'with flie breadth index,and-)oth-indiceshave ', I moving together since that time. Before a definite change in trend is indicated, the breadth index should act better than the market averages. Last week's action is the first indication that this may occur shortly. The rally from the June 25th intra-day low of 524.55 on the Dow-Jones Industrials carried back to 586. 30 on Thursday. A one-third retracement of this relatively rapid advance wo,ud bring the average back to the 565 area. Friday's intra-day low was 571. 28. A later extension of the rally could result in an advance to the 610-620 level, which is the objective of the base pattern formed during June. After that some further backing and filling would be needed to enlarge the longer-term potential base. The 560-550 range should now be a solid long-term resistance area. From here on the action of individual. issu-es should be more important than the action of the various averages. Last week this letter mentioned a number of possible candidates on our recommended list as purchases on weakness. We are contin uing this review with four more securities which appear Woolworth (68), a favorite of this letter for i a a price less then the market value of the 52.7 interest in its y. s, in effect, the entire U. S. operation and the highly profitable Wes,\ xican and Canadian subsidiaries are-being – 0-dividendprovides a-fair- – yield,and expansion into diSCOUntinms \), holds promi.se. \0J 0 million expansion program U. S. ,lywood (43) double sales since 1954 but the earn- ings record has been atrprice structure. Thus, the fact that earn- ings recovered . e . e year ended April, 1962, from a depressed 2.55 in the prio si cant, in that U. S. Jlywood was able to show good results despite low ice 1ch prevailed during most of the period. Any future imp- rovement in the buil market andlor strengthening of products prices could increase earnings substantia y,and the company is now being appraised at a conservative mult- iple of its 1961-1962 showing. Burroughs (37) is well along the road to recovery, but the present price appears conservative when viewed against the ultimate potential. Heavy development costs in recent years reduced earnings to 97 per share in 1958, from which level they have trended steadily upward to an estimated 1. 80-2.00 for 1962. That even greater increases are possible, however, is evidenced by the fact that net income from for- eign subsidiaries in 1961 '\liIls 11. 1 million while reported total net income was only 10.5 million. Thus, the domestic operation, which accounts for the major portion of sales, was still showing a los.. of this lo,ss to a prof!!- in years obviously creates highly favorable earnings prospects. Cn the face of it, the earnings of lVIurphy Corporation (16) have held in a narrow range between a 1.17 and 1. 36 per share since 1956. A glance at the cash flow, normally the most important measure of an oil company's growth, however, tells a somewhat different story. Cash earnings have increased in every year since 1955 and in 1961 were approximately 3. 37 per share. The company has one of the better records in the industry insofar as oil and gas exploration is concerned,and there is little reason to expect that the growth in cash flow will not continue. Thus, the current price which marks the stock at only five-times 1961 cash earnings, appears highly con- servative. Dow-Jones Ind. 576.17 Bow JUlIeS Rails – 4e ThiS market Jetter ie not, and under no circumstances IS to be construed as, an offer to OrEDMUI\TD W. TABELL OVALS I or fl sohcil;ntlOn to buy any secl,lTlbes rc err ere'n' e l Jrmntlon contamed herein is not gunranteed as to accuracy or completeness and the furnlshmg thereof lS not, and under no nl'cumstances IS to be construed as, a representa- tIon by Walston & Co , Ine All expreSSIOns of oplmon are subJect to change WIthout notlCC. Walston & Co, Inc.' and Offlcers, Directors, Stockholders and thereof, purchase, sell and may have an Interest m the secUrlUec mentIOned hercm ThiS market letter lS mtended and presellted merely as gencral, Informal commentary on day to day m\rket news anq not as a complete 'lnalYSlS Additional1nformatlOn With respcct to allY securities referred to herem be furmshcd upon rCiucst. JOl