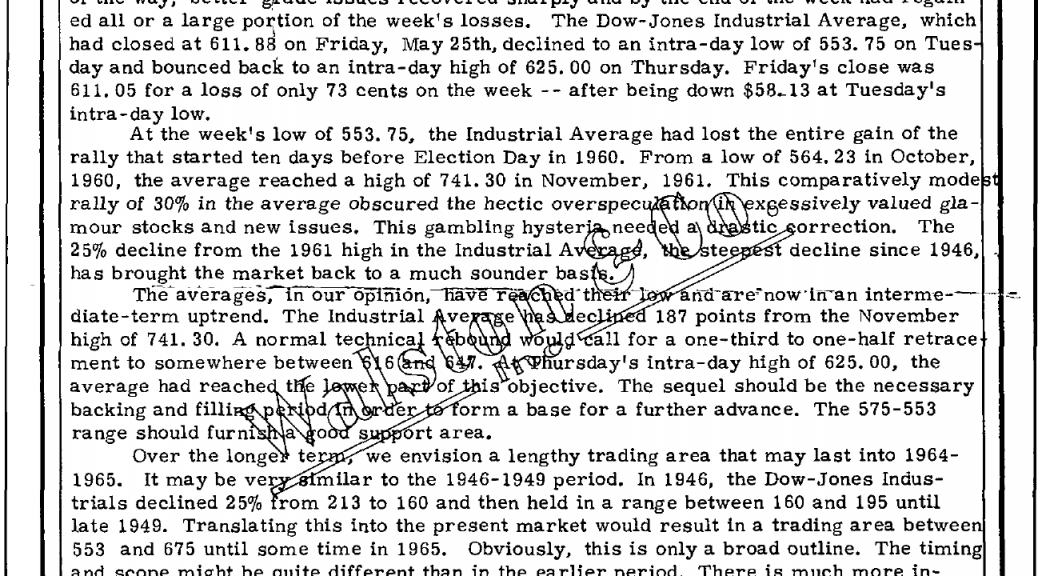 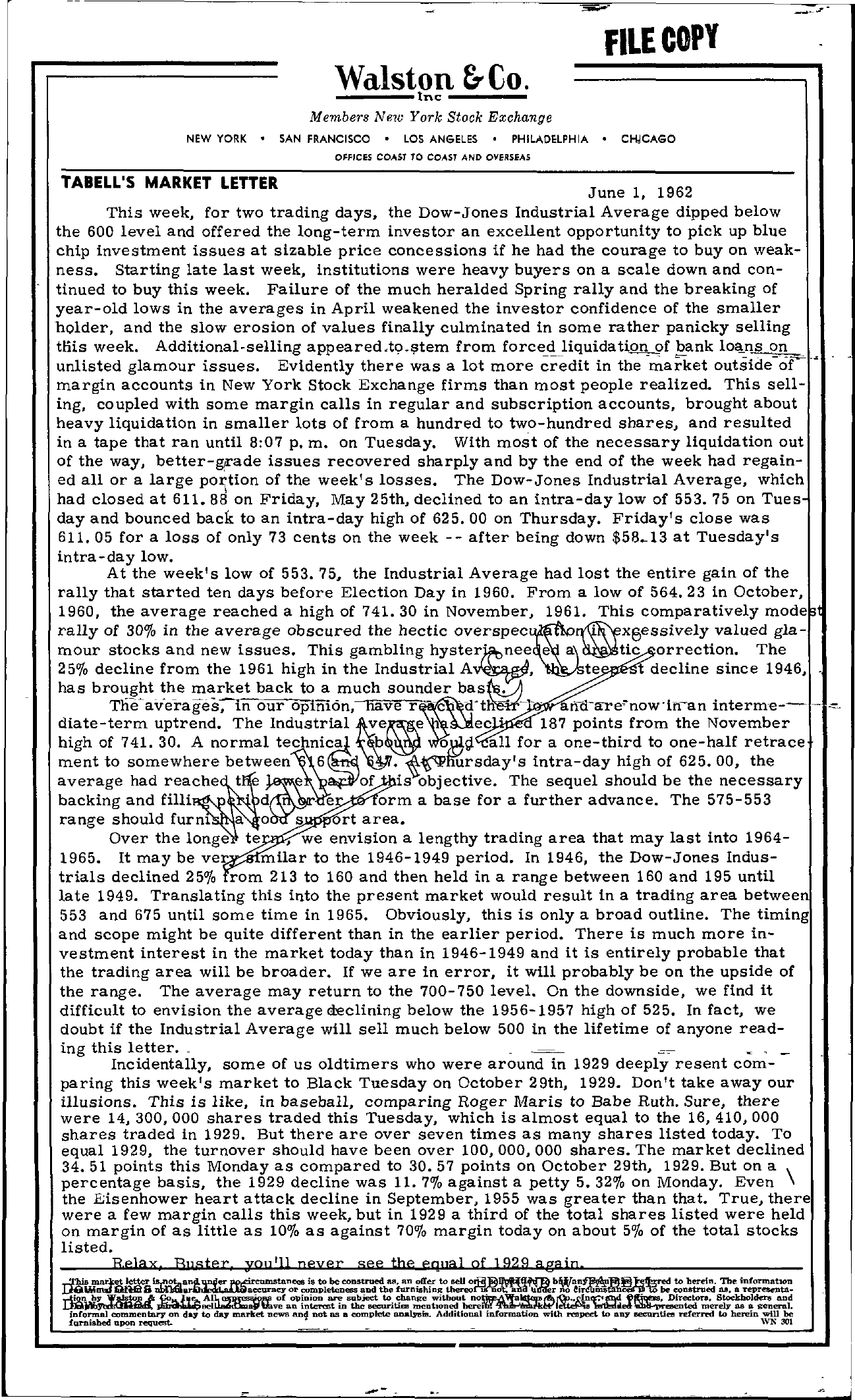 filE COpy W—-a–l-s-tlnocn—&–C–o–. Members New York Stock Exchange NEW YORK SAN FRANCISCO LOS ANGELES PHILADELPHIA CI-YCAGO OF-FICES COAST TO COAST AND OVERSEAS TABELL'S MARKET LETTER June I, 1962 This week, for two trading days, the Dow-Jones Industrial Average dipped below the 600 level and offered the long-term investor an excellent opportunity to pick up blue chip investment issues at sizable price concessions if he had the courage to buy on weak- ness. Starting late last week, institutions were heavy buyers on a scale down and con- tinued to buy this week. Failure of the much heralded Spring rally and the breaking of year-old lows in the averages in April weakened the investor confidence of the smaller holder, and the slow erosion of values finally culminated in some rather panicky selling tliis week. Additional-selling appeared.t9,tem from forced liquidation of bank loans on unlisted glamour issues. Evidently there was a lot more cr-edit in the -market outside-of' margin accounts in New York Stock Exchange firms than most people realized. This sell- ing, coupled with some margin calls in regular and subscription accounts, brought about heavy liquidation in smaller lots of from a hundred to two-hundred shares, and resulted in a tape that ran until 807 p. m. on Tuesday. With most of the necessary liquidation out of the way, better-l5(rade issues recovered sharply and by the end of the week had regain- ed all or a large of the week's losses. The Dow-Jones Industrial Average, which had closed at 611.88 on Friday, May 25th, declined to an intra-day low of 553.75 on Tues day and bounced back to an intra-day high of 625.00 on Thursday. Friday's close was 611.05 for a loss of only 73 cents on the week — after being down at Tuesday's intra-day low. At the week's low of 553.75, the Industrial Average had lost the entire gain of the rally that started ten days before Election Day in 1960. From a low of 564.23 in October, 1960, the average reached a high of 741. 30 in November, 1961. This comparatively rally of 30 in the average obscured the hectic valued gla- mour stocks and new issues. This gambling e a\ The 25 decline from the 1961 high in the Industrial te decline since 1946, has brought the market back to a much sounder basfu.v/l our opinion, liave r interme– — diate-term uptrend. The Industrial ve e ecl ' 187 points from the November ment to somewhere between 6 ursday's intra-day high of 625.00, the average had backing and filli te .d of is objective. The sequel should be the necessary e orm a base for a further advance. The 575-553 range should furm a 0 sort area. Over the longe we envision a lengthy trading area that may last into 1964- 1965. It may be ve milar to the 1946-1949 period. In 1946, the Dow-Jones Indus- trials declined 25 rrom 213 to 160 and then held in a range between 160 and 195 until late 1949. Translating this into the present market would result in a trading area between 553 and 675 until some time in 1965. Obviously, this is only a broad outline. The timing and scope might be quite different than in the earlier period. There is much more in- vestment interest in the market today than in 1946-1949 and it is entirely probable that the trading area will be broader. If we are in error, it will probably be on the upside of the range. The average may return to the 700-750 level. On the downside, we find it difficult to envision the average cleclining below the 1956-1957 high of 525. In fact, we doubt if the Industrial Average will sell much below 500 in the lifetime of anyone read- ing this letter. . Incidentally, some of us oldtimers who were around in 1929 deeply resent com- paring this week's market to Black Tuesday on October 29th, 1929. Don't take away our illusions. This is like, in baseball, comparing Roger Maris to Babe Ruth. Sure, there were 14,300,000 shares traded this Tuesday, which is almost equal to the 16,410,000 shares traded in 1929. But there are over seven times as many shares listed today. To equal 1929, the turnover should have been over 100,000,000 shares. The market declined 34.51 points this Monday as compared to 30.57 points on October 29th, 1929. But on a percentage basis, the 1929 decline was 11. 7 against a petty 5. 32 on Monday. Even \ the Eisenhower heart attack decline in September, 1955 was greater than that. True, there were a few margin calls this week, but in 1929 a third of the total shares listed were held on margin of as little as 10 as against 70 margin today on about 5 of the total stocks listed. Belax Bl1ster youlll never see the equal of 1928 agajn mnrll;et letter is.not..antl,'qnVer lJOWmd 0fHa & nois to be construed 88, IlD offer to seU or completeness and the furnishing thereor-'utifot 'aM 'b.'nifer to berein. The infonnntwn be eoustrued ru!, a reprellenta.- .. … of ol)inion are subjecl; to change without . Directon, StocldJolderto; and an intcTmt in the BeCUritie!l lDcntloned bcreiVI merely as I'L general. informal commentary on day to day market news an4 not as a complete an.a.buill. Additional information with reped to any secmntiel!l nferred to herein will be furnished upon requert.. '. WN 301 — .