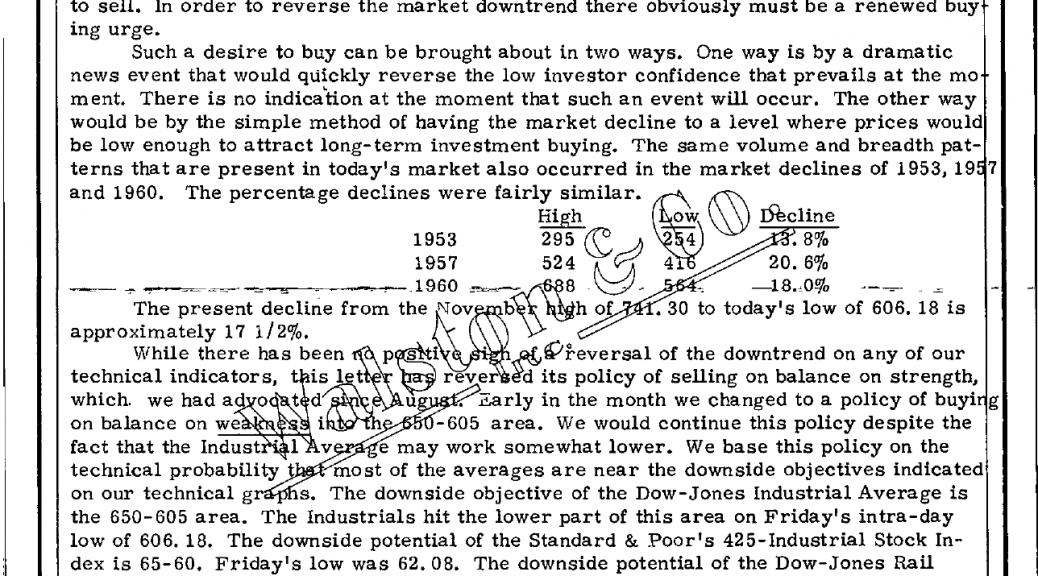 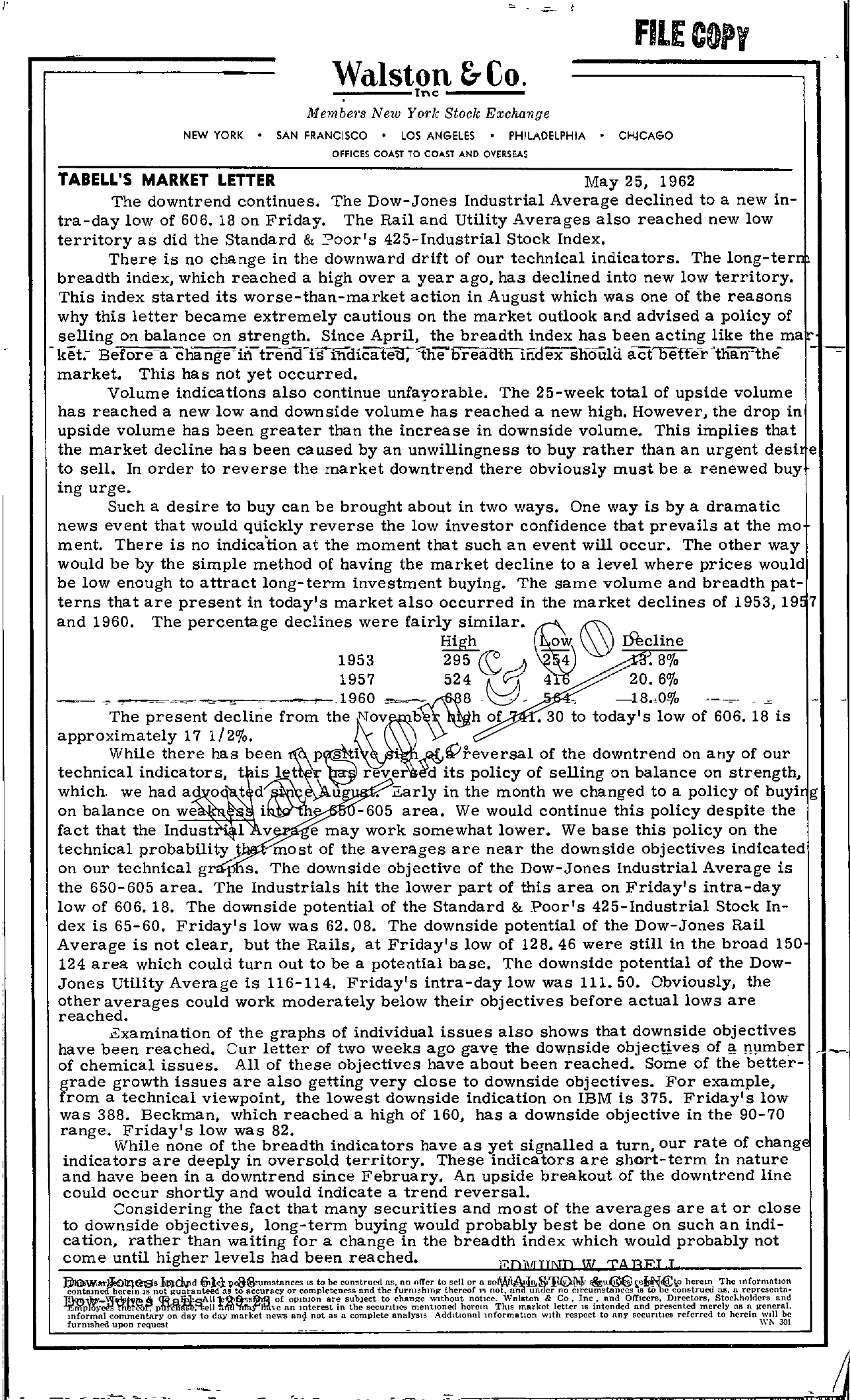 I' FILE COpy W—-a–l-s-tIoncn–&–C–o–. Membe's New York Stock Exchange NEW YORK SAN FRANCISCO LOS ANGELES PHILADELPHIA CH.jCAGO OFFICES COAST TO COAST AND OVERSEAS lABELL'S MARKET LETTER May 25, 1962 The downtrend continues. The Dow-Jones Industrial Average declined to a new in- tra-day low of 606. 18 on Friday. The Rail and utility Averages also reached new low territory as did the Standard & oor's 425-Industrial Stock Index. There is no change in the downward drift of our technical indicators. The long-ter breadth index, which reached a high over a year ago, has declined into new low territory. This index started its worse-than-market action in August which was one of the reasons why this letter became extremely cautious on the market outlook and advised a policy of selling on balance on strength. Since April, the breadth index has been acting like the ma ket.- Before a change-iii.-trend-fsll1dicated, 1hebreadth-indexsnould act beffeY'than'-the market. This has not yet occurred. Volume indications also continue unfayorable. The 25-week total of upside volume has reached a new low and downside volume has reached a new high. However, the drop in upside volume has been greater than the increase in downside volume. This implies that the market decline has been caused by an unwillingness to buy rather than an urgent desi e to sell. In order to reverse the market downtrend there obviously must be a renewed buy ing urge. Such a desire to buy can be brought about in two ways. One way is by a dramatic news event that would quickly reverse the low investor confidence that prevails at the mo ment. There is no indication at the moment that such an event will occur. The other way would be by the simple method of having the market decline to a level where prices would be low enough to attract long-term investment buying. The same volume and breadth pat- terns that are present in today's market also occurred in the market declines of 1953,19 7 and 1960. The percentage declines were fairly similar. High ow 'W 1953 295 4 9 4 .8 The present decline from b h of .30 to today's low of 606. 18 is approximately 17 1/2. While there has been technical indicator s, is let rever of the downtrend on any of our its policy of selling on balance on strength, which, we had ad 0 t u. in the month we changed to a policy of buyi g on balance on we ihW-tb -605 area. We would continue this policy despite the fact that the Indust' v e may work somewhat lower. We base this policy on the technical probability t most of the averages are near the downside objectives indicated on our technical gr s. The downside objective of the Dow-Jones Industrial Average is the 650-605 area. The Industrials hit the lower part of this area on Friday's intra-day low of 606.18. The downside potential of the Standard & Poor's 425-Industrial Stock In- dex is 65-60. Friday's low was 62.08. The downside potential of the Dow-Jones Rail Average is not clear, but the Rails, at Friday's low of 128.46 were still in the broad 150 124 area which could turn out to be a potential base. The downside potential of the Dow- Jones Utility Average is 116-114. Friday's intra-day low was 111.50. Obviously, the other averages could work moderately below their objectives before actual lows are reached. of the graphs of individual issues also shows that downside objectives have been reached. Cur letter of two weeks ago gavE! the downside objectj,ves of TI!lmber of chemical issues. All of these objectives have about been reached. Some of the better- grade growth issues are also getting very close to downside objectives. For example, from a technical viewpoint, the lowest downside indication on IBM is 375. Friday's low was 388. Beckman, which reached a high of 160, has a downside objective in the 90-70 range. Friday's low was 82. While none of the breadth indicators have as yet signalled a turn, our rate of chang indicators are deeply in oversold territory. These indicators are short-term in nature and have been in a downtrend since February. An upside breakout of the downtrend line could occur shortly and would indicate a trend reversal. Considering the fact that many securities and most of the averages are at or close to downside objectives, long-term buying would probably best be done on such an indi- cation, rather than waiting for a change in the breadth index which would probably not come until higher levels had been reached. F'DJ\qTTND vV TA BET T &le1tul(j)i\NIIn'll lll'le-Ss contamedhercln 16 not guaranteed p08&umstances IS to be construed as, an offer to sell or as to accuracy or completeness nnd the furnIshlng thereof a I' not;'nnd un'acr no r&;u6l cIrcumstances IS….Wbe herein construed The wformntlon as, a representll- ' Jilgm1.cAH of OP!nlOn are llubJect to change Without notIce. Walston & Co. Inc. lind Officers, Dlrcctors, Stockholders and 'ft-rffl'frt'nt'M,c an mterest in the sccurltll.S ment10ned herein ThiS market letter IS intended and presented merely liS II general. mformnl commentary on day to day market neVi'S and not as a complete anah'slB Additional mformatlon With respect to any referred to herein Will be furmshed upon r e q u e s t ' , – \\'1\ JOI , . .,J