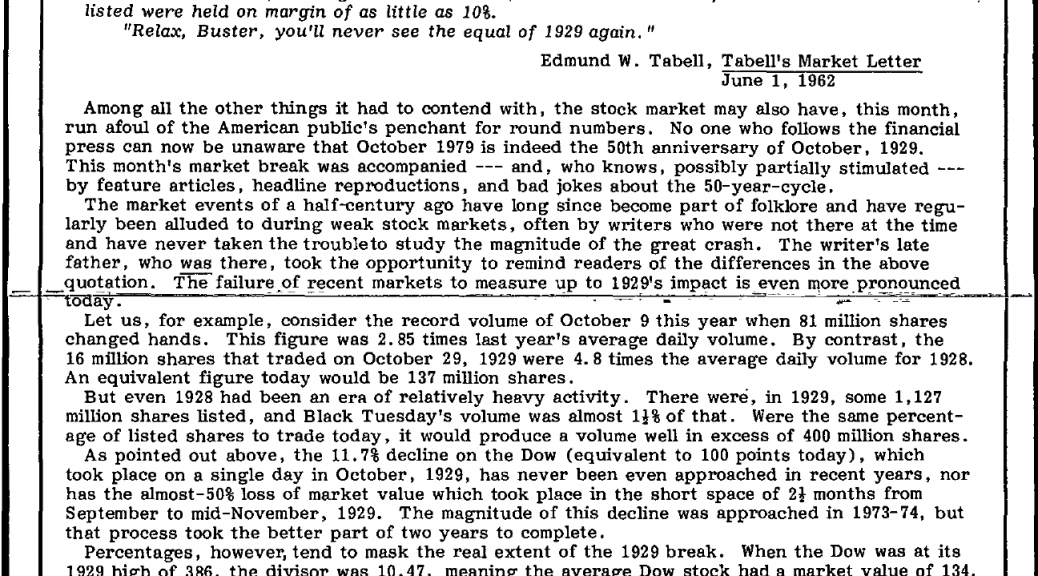 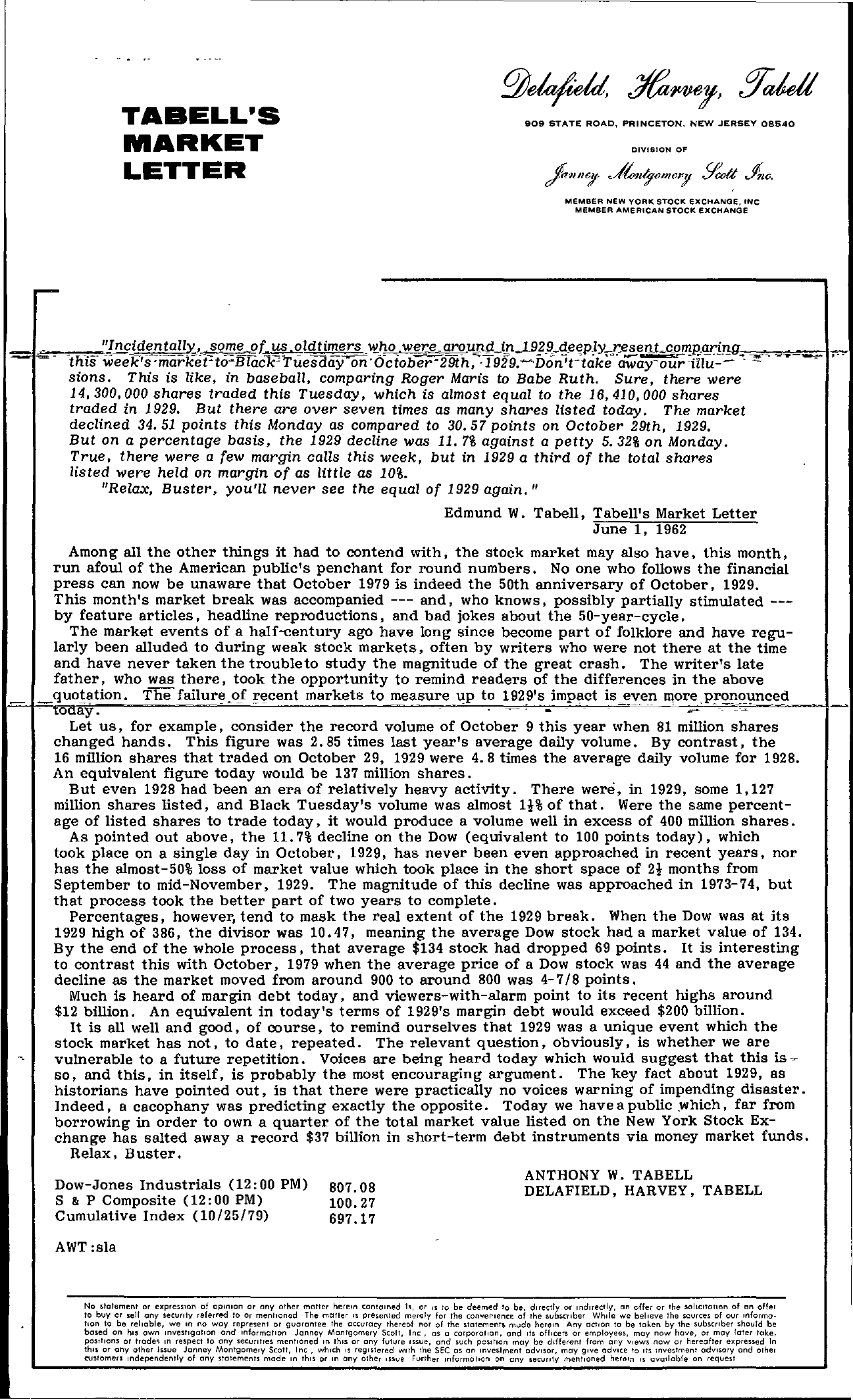 TABELL'S MARKET LETTER 909 STATE ROAD, PRINCETON, NEW JERSEY 08540 DIVISION OF MEMBER NEW YORK STOCK eXCHANGE, INC MEMBER AMERICAN STOCK eXCHANGE nciden – -' 'this' L us old t ime,rs ,Who arou-'J'U.. sions. This is like, in baseball, comparing Roger Maris to Babe Ruth. Sure, there were 14,300,000 shares traded this Tuesday, which is almost equal to the 16,410,000 shares traded in 1929. But there are over seven times as many shares listed today. The market declined 34.51 points this Monday as compared to 30.57 points on October 29th, 1929. But on a percentage basis, the 1929 decline was 11.7 against a petty 5.32 on Monday. True, there were a few margin calls this week, but in 1929 a third of the total shares listed were held on margin of as little as 10. Relax, Buster, you'll never see the equal of 1929 again. Edmund W. Tabell, Tabell's Market Letter June I, 1962 Among all the other things it had to contend with, the stock market may also have, this month, run afoul of the American public's penchant for round numbers. No one who follows the financial press can now be unaware that October 1979 is indeed the 50th anniversary of October, 1929. This month's market break was accompanied — and, who knows, possibly partially stimulated –by feature articles, headline reproductions, and bad jokes about the 50-year-cycle. The market events of a half-century ago have long since become part of folklore and have regularly been alluded to during weak stock markets, often by writers who were not there at the time and have never taken the trouble to study the magnitude of the great crash. The writer's late father, who was there, took the opportunity to remind readers of the differences in the above I-q-'utooataayt.ion. Thefailure.of recent markets to measure up to 192'9'-s impact is-even 1I10re,pronounced Let us, for example, consider the record volume of October 9 this year when 81 million shares changed hands. This figure was 2.85 times last year's average daily volume. By contrast, the 16 million shares that traded on October 29, 1929 were 4.8 times the average daily volume for 1928. An equivalent figure today would be 137 million shares. But even 1928 had been an era of relatively heavy activity. There were, in 1929, some 1,127 million shares listed, and Black Tuesday's volume was almost 1l of that. Were the same percent- age of listed shares to trade today, it would produce a volume well in excess of 400 million shares. As pointed out above, the 11. 7 decline on the Dow (equivalent to 100 points today), which took place on a single day in October, 1929, has never been even approached in recent years, nor has the almost-50 loss of market value which took place in the short space of 2! months from September to mid-November, 1929. The magnitude of this decline was approached in 1973-74, but that process took the better part of two years to complete. Percentages, however, tend to mask the real extent of the 1929 break. When the Dow was at its 1929 high of 386, the divisor was 10.47, meaning the average Dow stock had a market value of 134. By the end of the whole process, that average 134 stock had dropped 69 points. It is interesting to contrast this with October, 1979 when the average price of a Dow stock was 44 and the average decline as the market moved from around 900 to around 800 was 4-7/8 points. Much is heard of margin debt today, and viewers-with-alarm point to its recent highs around 12 billion. An equivalent in today's terms of 1929's margin debt would exceed 200 billion. It is all well and good, of course, to remind ourselves that 1929 was a unique event which the stock market has not, to date, repeated. The relevant question, obviously, is whether we are -, vulnerable to a future repetition. Voices are being heard today which would suggest that this so, and this, in itself, is probably the most encouraging argument. The key fact about 1929, as historians have pointed out, is that there were practically no voices warning of impending disaster. Indeed, a cacophany was predicting exactly the opposite. Today we have a public .which, far from borrowing in order to own a quarter of the total market value listed on the New York Stock Exchange has salted away a record 37 billion in short-term debt instruments via money market funds. Relax, Buster. Dow-Jones Industrials (12 00 PM) 807.08 S & P Composite (1200 PM) 100.27 Cumulative Index (10/25/79) 697.17 ANTHONY W. T ABELL DELAFIELD, HARVEY, TABELL AWT sla ' No statement or expression of opinion or any other malter herem contained is, or IS to be deemed to be, directly or Indirectly, an offer or the 50l\clloon of an offel 10 buy or sell trny securrty referred 10 or mentioned The mailer IS presented merely for Ihe conVellenCE of the subscrrber Whrle oNe believe the sources of our Informo- hon 10 be relltrble, we In no woy represent or guarantee the accuracy thereof nor of the m,-,de herein Any act, on 10 be to!…en by the subSCriber should be bosed on hiS own investigatIOn and Information Janney Montgomery 5coll, Inc, as a corporotlon, ond Its off,cC!rs or employees, moy now hove, or moy later toke, POSItiOnS or In respect to ony seCurrtles mentioned In thiS or ony future Issue, ond such POSItiOn may be different from any Views now or hereofter expressed In Inl5 or trny other luue Janney Montgomery Scoll, Inc, which IS registered With the SEC os an Investment odvlsor, mtry give adVice to Its rnvestment trdvlsory ond olhel customers Independently of ony stotements mode In thiS or In ony other Issue Further Information on Qny securrty mC!ntloned herein IS available on request