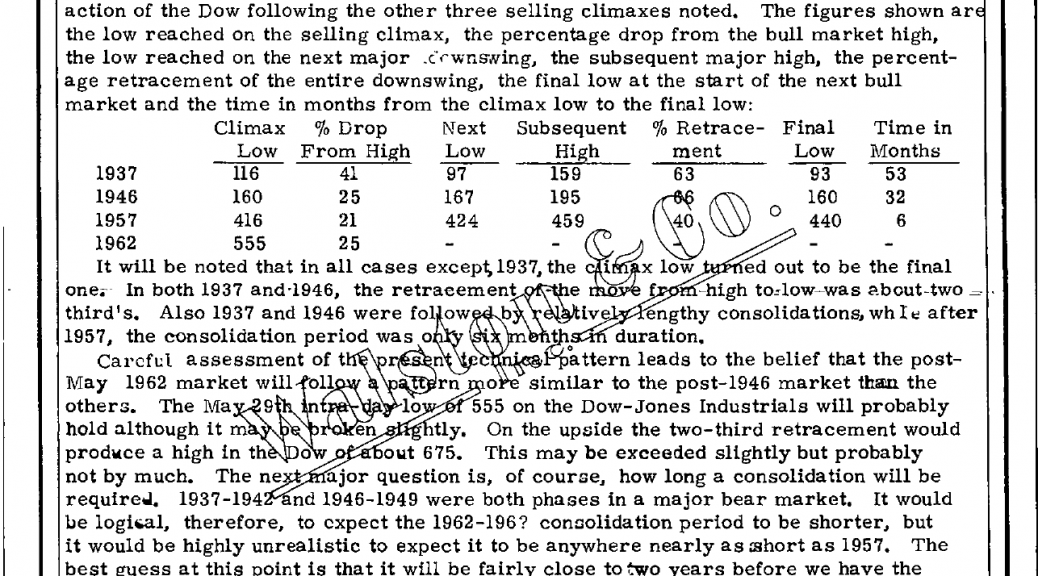 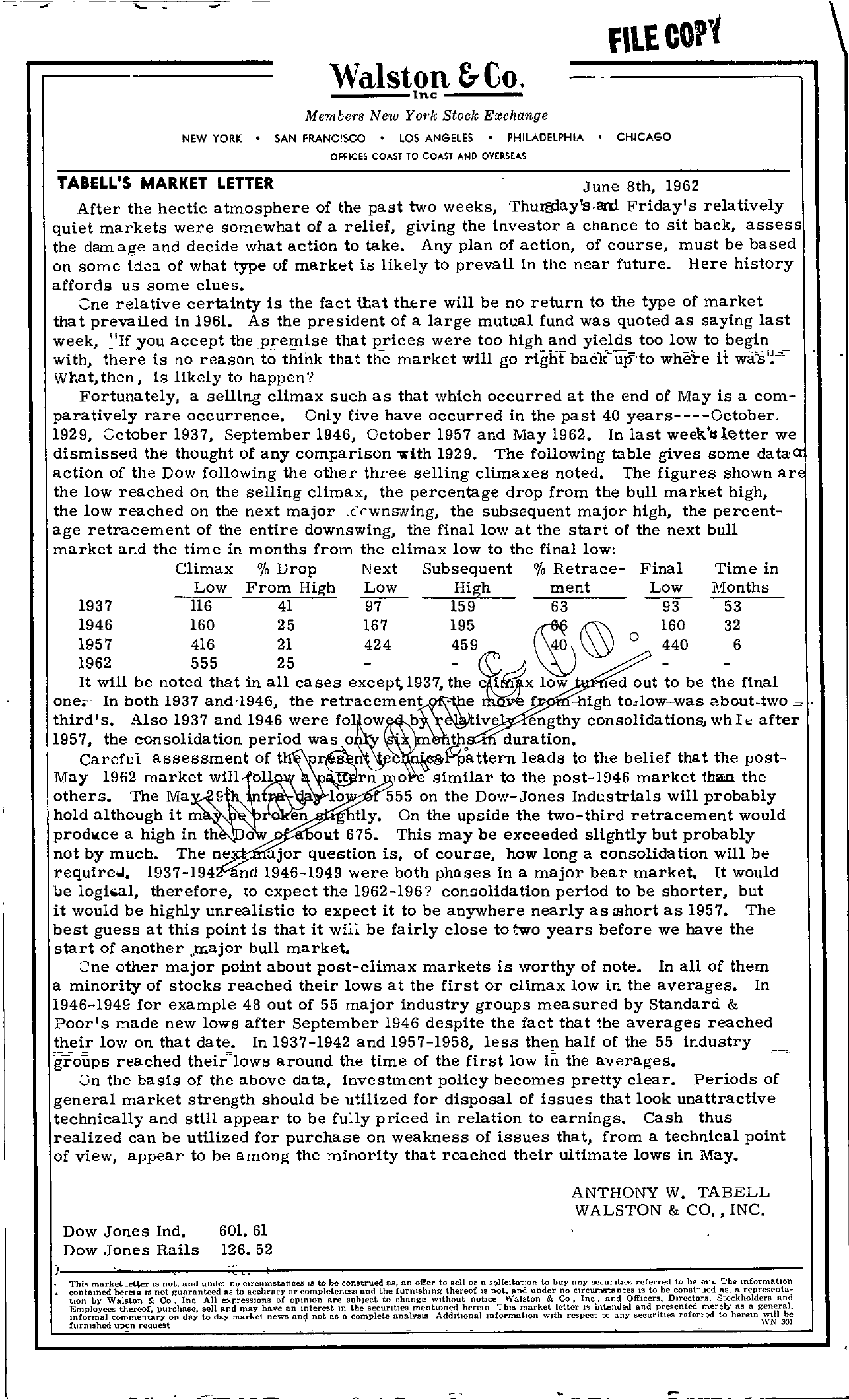 …. – – Walston &Co. lnc filECOPl Members York Stock Exchange NEW YORK SAN FRANCISCO LOS ANGELES PHILADELPHIA CHICAGO OFFICES COAST TO COAST AND OVERSEAS TABELL'S MARKET LETTER June 8th, 1962 After the hectic atmosphere of the past two weeks, ThuIlPay's.anl Friday's relatively quiet markets were somewhat of a relief, giving the investor a chance to sit back, assess the dam age and decide what action to take. Any plan of action, of course, must be based on some idea of what type of market is likely to prevail in the near future. Here history affords us some clues. Cne relative certainty is the fact \tat tJu;re will be no return to the type of market tha t prevailed in 1961. As the president of a large mutual fund was quoted as saying last week, accept the.premise that prices were too high and yields too low to begin 'with, there is no reason to think that the market will go wnere it what, then , is likely to happen Fortunately, a selling climax such as that which occurred at the end of May is a com- paratively rare occurrence. Only five have occurred in the past 40 years—-October. 1929, Cctober 1937, September 1946, October 1957 and May 1962. In last week.'lIle,tter we dismissed the thought of any comparison with 1929. The following table gives some data action of the Dow following the other three selling climaxes noted. The figures shown ar the low reached on the selling climax, the percentage drop from the bull market high, the low reached on the next major .(.wnslI'ing, the subsequent major high, the percentage retracement of the entire downswing, the final low at the start of the next bull market and the time in months from the climax low to the final low Climax Drop Next Subsequent Retrace- Final Low From High Low High ment Low 1937 116 41 97 159 63 93 1946 1957 160 25 416 21 167 195 424 459 160 W40 0 440 Time in Months 53 32 6 1962 555 25 – – It will be noted that in all cases except, 1937, the iMilx lowed out to be the final one. In both 1937 and'1946, the f to,low-was . -third's. Also 1937 and 1946 were 1957, the consolidation period was 0 . ive engthy consolidations,whr after duration. Carcfd assessment of leads to the belief that the post- May 1962 market will Olmi 0 similar to the post-1946 market than the others. The Ma 9 n 10 555 on the Dow-Jones Industrials will probably hold although it m en tly. On the upside the two-third retracement would prodl(ce a high in th Ollt 675. This may be exceeded slightly but probably not by much. The ne ajor question is, of course, how long a consolidation will be require.!. 1937-194 nd 1946-1949 were both phases in a major bear market. It would be logiooal, therefore, to cxpect the 1962-l96 conoolidation period to be shorter, but it would be highly unrealistic to expect it to be anywhere nearly as alhort as 1957. The best guess at this point is that it will be fairly close to two years before we have the start of another Lajor bull market. 2ne other major point about post-climax markets is worthy of note. In all of them a minority of stocks reached their lows at the first or climax low in the averages. In 1946-1949 for example 48 out of 55 major industry groups measured by Standard & Poor's made new lows after September 1946 despite the fact that the averages reached their low on that date. In 1937-1942 and 1957-1958, less the!! half of the 55 industry groups reached around the time of the first low in the averages. – ;)n the basis of the above data, investment policy becomes pretty clear. Periods of general market strength should be utilized for disposal of issues that look unattractive technically and still appear to be fully priced in relation to earnings. Cash thus realized can be utilized for purchase on weakness of issues that, from a technical point of view, appear to be among the minority that reached their ultimate lows in May. Dow Jones Ind. 601. 61 Dow Jones Rails 126. 52 ANTHONY W. TABELL WALSTON & CO. , INC. Thll market letter 18 not. Bnd under no ClrCYmstnnees IS to be construed as, nn offer to Bell or a soliCitation to buy flny secunties referred to herem. The mformatlOn contained herem IS not gtlnrnntced as to accUracy or completeness and the furnlshmg thereof IS not, and under no CIrcumstances 15 to be construed nB, Ii representa- tIOn by Wnlston & Co Inc All e.pressJOns of oplnlon arc subJect to change WIthout notice Walston & Co, Inc, and OffIcers, DIrectors, Stockholders and Bmp!oyees thereof, sell and may have an mterest m the securltles mentioned herem ThiS market letter 1'1 intended and presentf'rl. merely as Ii general. mformnl commentary on day to day market news ane not as n complete analYSIS Addltlonnl mformatlOn WJth respect to any securittes referred to herelO ';111 be furmshed upon request \\ N 301