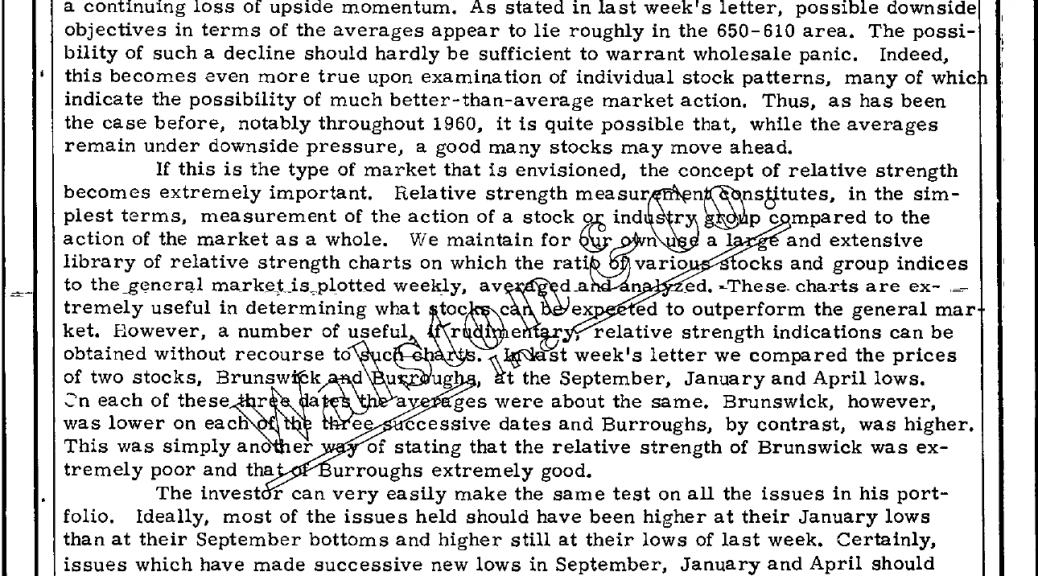 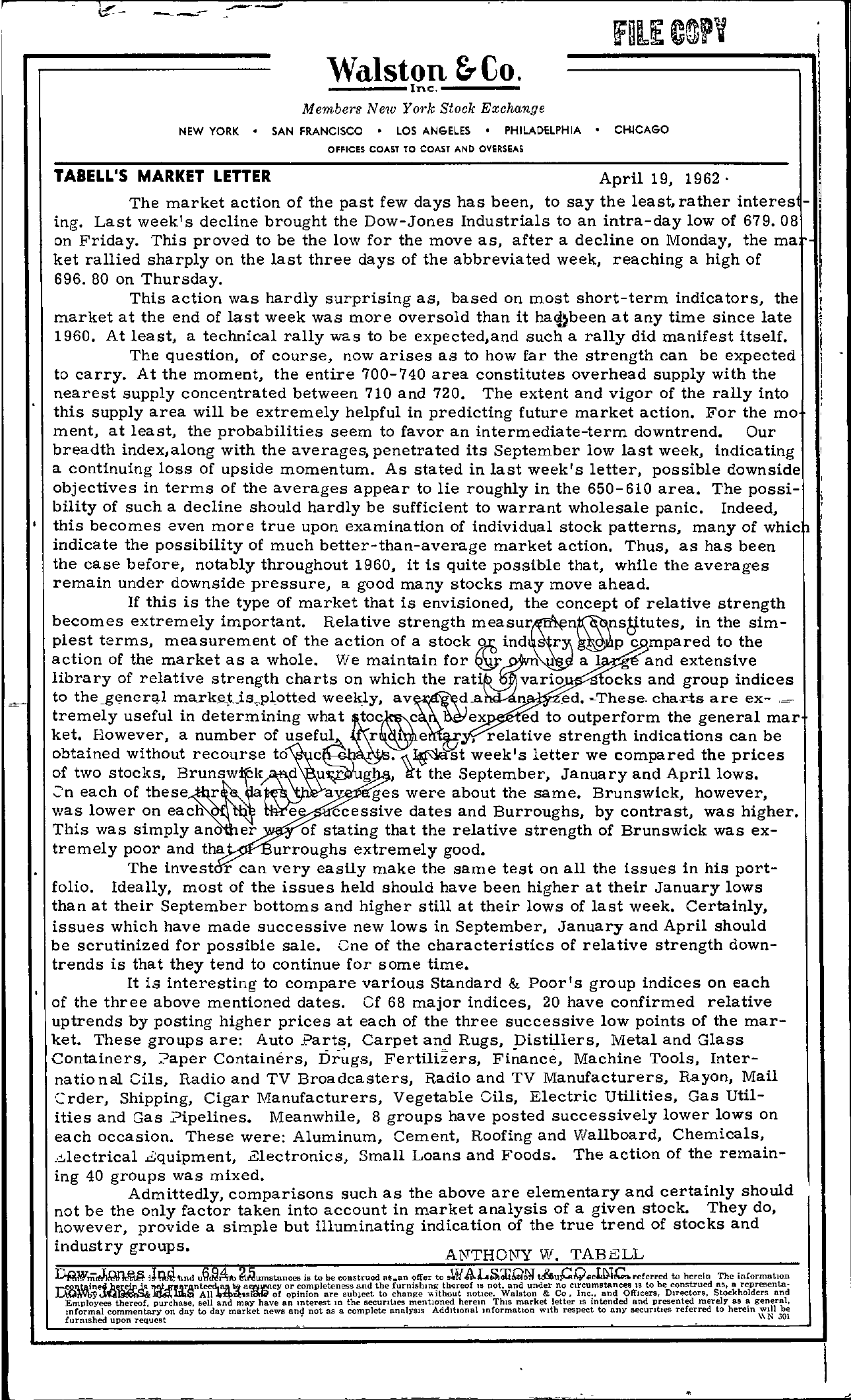 ..— &-Walston Co. Inc. Members New YOj'k Stock Exchange NEW YORK SAN FRANCISCO LOS ANGELES PHILADELPHIA CHICAGO OFFices COAST TO COAST AND OVERSEAS TABEll'S MARKET lETTER April 19, 1962 The market action of the past few days has been, to say the least, rather interes – ing. Last week's decline brought the Dow-Jones Industrials to an intra-day low of 679.08 on Friday. This proved to be the low for the move as, after a decline on Monday, the ma ket rallied sharply on the last three days of the abbreviated week, reaching a high of 696. 80 on Thursday. This action was hardly surprising as, based on most short-term indicators, the market at the end of last week was more oversold than it habbeen at any time since late 1960. At least, a technical rally was to be expected,and such a rally did manifest itself. The question, of course, now arises as to how far the strength can be expected to carry. At the moment, the entire 700-740 area constitutes overhead supply with the nearest supply concentrated between 710 and 720. The extent and vigor of the rally into this supply area will be extremely helpful in predicting future market action. For the mo ment, at least, the probabilities seem to favor an intermediate-term downtrend. Our breadth index,along with the averages, penetrated its September low last week, indicating a continuing loss of upside momentum. As stated in last week's letter, possible downside objectives in terms of the averages appear to lie roughly in the 650- 610 area. The possi- bility of such a decline should hardly be sufficient to warrant wholesale panic. Indeed, this becomes even more true upon examination of individual stock patterns, many of whic indicate the possibility of much better-than-average market action. Thus, as has been the case before, notably throughout 1960, it is quite possible that, while the averages remain under downside pressure, a good many stocks may move ahead. If this is the type of market that is envisioned, the concept of relative strength becomes extremely important. Relative strength measurKCAnsytutes, in the sim- plest terms, measurement of the action of a stock ind r gMtlp c mpared to the action of the market as a whole. We maintain for a I and extensive library of relative strength charts on which the ratip fsp) vario ocks and group indices to thegcncral weekly, oed. cha-r-ts are ex- tremely useful in determining what keto However, a number of ex ed to outperform the general mar B' relative strength indications can be obtained without c. week's letter we compared the prices of two stocks, Brunsw' k d u ug, 1ft the September, January and April lows. 2n each of these r a a ges were about the same. Brunswick, however, was lower on eacH e ccessive dates and Burroughs, by contrast, was higher. This was simplyano of stating that the relative strength of Brunswick was ex- tremely poor and tha urroughs extremely good. The invest r can very easily make the same test on all the issues in his port- folio. Ideally, most of the issues held should have been higher at their January lows than at their September bottoms and higher still at their lows of last week. Certainly, issues which have made successive new lows in September, January and April should be scrutinized for possible sale. Cne of the characteristics of relative strength down- trends is that they tend to continue for some time. It is interesting to compare various Standard & Poor's group indices on each of the three above mentioned dates. Cf 68 major indices, 20 have confirmed relative uptrends by posting higher prices at each of the three successive low points of the mar- ket. These groups are Auto Parts, Carpet and Rugs, Distillers, Metal and Glass Containers, aper Containers, Fertilizers, Finance, Machine Tools, Inter- national. Cils, Radio and TV Broadcasters, Radio and TV Manufacturers, Rayon, Mail -rder, Shipping, Cigar Manufacturers, Vegetable Oils, Electric Utilities, Gas Util- ities and Gas ipelines. Meanwhile, 8 groups have posted successively lower lows on each occasion. These were Aluminum, Cement, Roofing and Wallboard, Chemicals, oo,lectrical ..!;quipment, Electronics, Small Loans and Foods. The action of the remain- ing 40 groups was mixed. Admittedly, comparisons such as the above are elementary and certainly should not be the only factor taken into account in market analysis of a given stock. They do, however, provide a simple but illuminating indication of the true trend of stocks and industry groups. AI\TTHONY W. TABELL lJllR'hnd is to be construed 115..an offer to sVilALSJtQN to herein The informatIon r!!.stll.ta.ine4 betehds W..B'f4rJl,nteedtP.1l 'i9 or completeness and the furnishmg thereof IS not. and under no circumstances IS to be construed as, n rcpresenta All Jdtli),lsiSrW of opinion are subject to change notIce. Walston & Co, Inc.. and Officers, Directors, Stockholders and Employees thereof, purchase, sell and may have an Interest m the secUl'll.les mentIOned herem ThiS market letter IS intended and presented merely as a general, mformal commentary on day to day market news nnd not as a complete Ilnalysis Additional mformatlon WIth respect to any securIties referred to herein Will be furmshed upon r e q u e s t \\ N 301