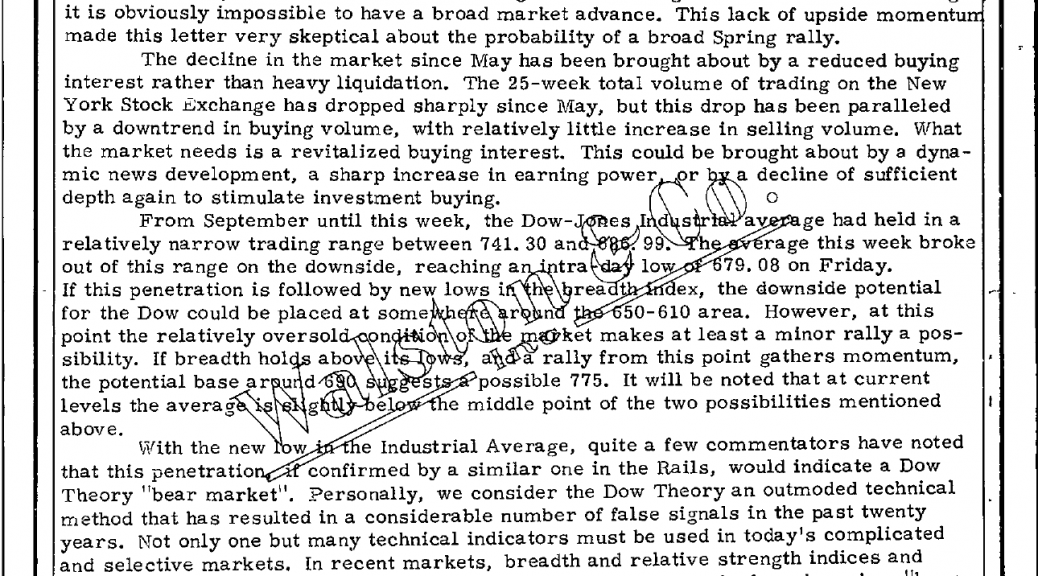 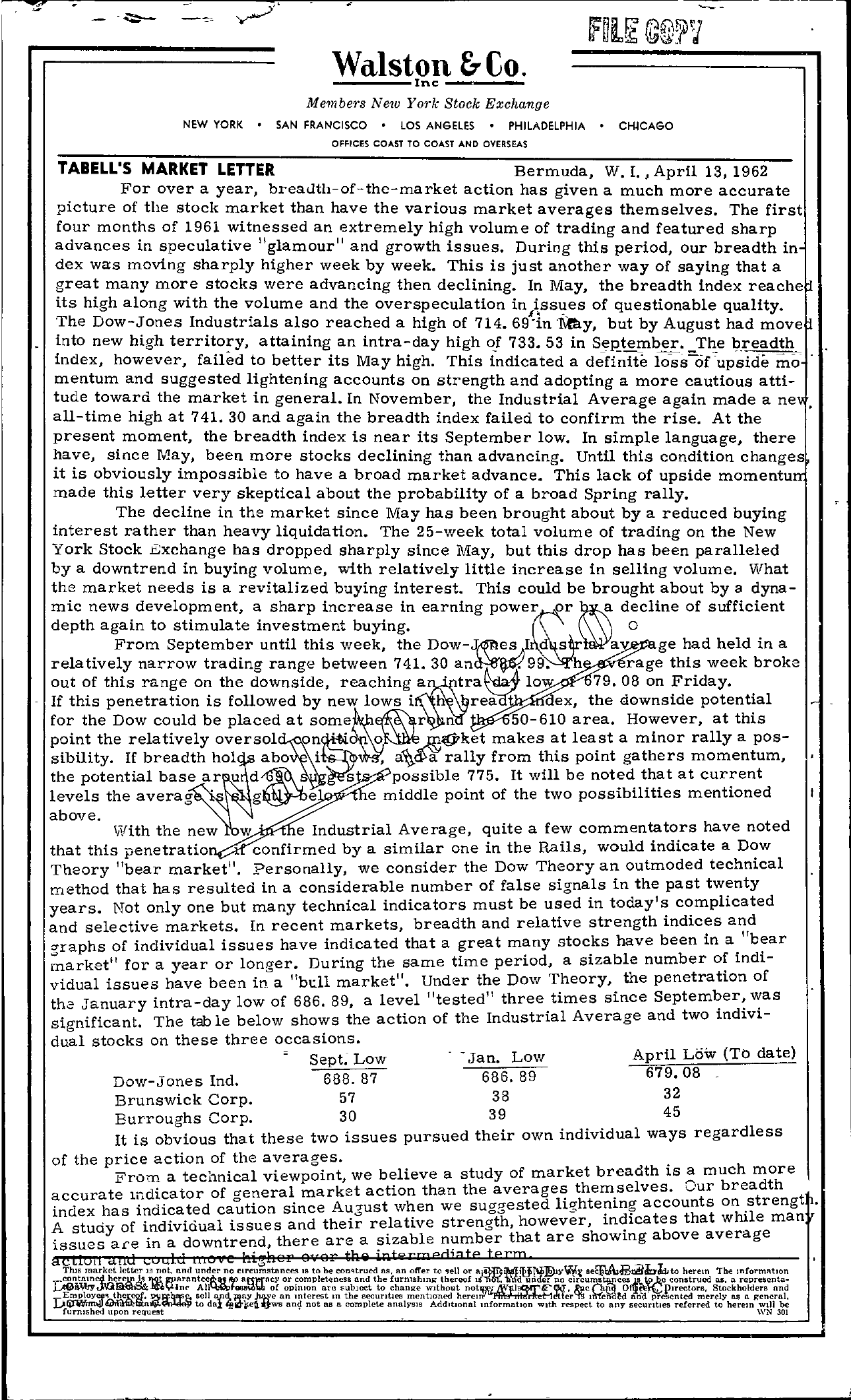 .. ——–.——————— -. — — Walston &CO. Inc Members New York Stock Exchange NEW YORK SAN FRANCISCO LOS ANGELES PHILADELPHIA CHjCAGO OFFICES COAST TO COAST AND OVERSEAS TABELL'S MARKET LETTER Bermuda, W. 1., April 13,1962 For over a year, breauth-of-thc-market action has given a much more accurate picture of the stock market than have the various market averages themselves. The first four months of 1961 witnessed an extremely high volume of trading and featured sharp advances in speculative glamour and growth issues. During this period, our breadth in dex was moving sharply higher week by week. This is just another way of saying that a great many more stocks were advancing then declining. In May, the breadth index reache its high along with the volume and the overspeculation in issues of questionable quality. The Dow-Jones Industrials also reached a high of 714. 69A;in 'll.ttty, but by August had move into new high territory, attaining an intra-day high of 733.53 in SeJtember. The breadth index, however, failed to better its May high. This indicated a mo mentum and suggested lightening accounts on strength and adopting a more cautious atti- tude toward the market in general. In November, the Industrial Average again made a nev . all-time high at 741. 30 and again the breadth index failed to confirm the rise. At the present moment, the breadth index is near its September low. In simple language, there have, since May, been more stocks declining than advancing. Until this condition changes it is obviously impossible to have a broad market advance. This lack of upside momentull made this letter very skeptical about the probability of a broad Spring rally. The decline in the market since May has been brought about by a reduced buying interest rather than heavy liquidation. The 25-week total volume of trading on the New York Stock Bxchange has dropped sharply since May, but this drop has been paralleled by a downtrend in buying volume, with relatively little increase in selling volume. What the market needs is a revitalized buying interest. This could be brought about by a dyna- mic news development, a sharp increase in earning depth again to stimulate investment buying. decline of sufficient 0 From September until this week, the Ids av ge had held in a relatively narrow trading range between 741. 30 out of this range on the downside, tra If this penetration is followed by new lows i II h rage this week broke 1m 79.08 on Friday. ex, the downside potential for the Dow could be placed at n v50-610 area. However, at this point the relatively makes at least a minor rally a pos- sibility. If hoI abo i , rally from this point gathers momentum, ' the potential base ar u s possible 775. It will be noted that at current levels the averag' middle point of the two possibilities mentioned I above. With the new w' e Industrial Average, quite a few commentators have noted that this penetratio confirmed by a similar one in the Rails, would indicate a Dow Theory bear market. Personally, we consider the Dow Theory an outmoded technical method that has resulted in a considerable number of false signals in the past twenty years. Not only one but many technical indicators must be used in and selective markets. In recent markets, breadth and relative strength mdlces O'raphs of individual issues have indicated that a great many stocks have been in a bear for a year or longer. During the same time period, a sizable number of indi- vidual issues have been in a bdl market. Under the Dow Theory, the penetration of vtha January intra-day low of 686. 89, a level tested three.times since as significant. The tab Ie below shows the action of the Industrial Average and two mdlvl- dual stocks on these three occasions. Sept; Low Dow-Jones Ind. 688. 87 -Jan. Low 686. 89 April Low (TO date) 679.08 Brunswick Corp. 57 38 32 Burroughs Corp. 30 39 45 It is obvious that these two issues pursued their own individual ways regardless act ad an coo lIIO c e l l , ; This market letter IS not. and under no clrcumstnnces IS to be con;trued as, an offer to ;('11 or herem The InformatIOn hcrel1l.h 'l'01jirJ.Hl.rnntClrl1I1 or completeness nnd the furmshmg thereof 10m;, 'h'ttd un-der no circumstancesJ,s tp.k.c construed (lS, a rcprescntn J…ilU'M.IITyJ,Ga.6hS&JaoY.lnr of opinion arc subJcct to change Without JWltisQAf'4l'Illd. he nilil plrectors. Stockholders and Bell P'H'c an mterest III the secUrities menhoned … li'rf'enaM ana presented merely as n general. furnished upon requeJ!t U! dnJ ltet9ws nn9 not as a complete anahsIs AdditIOnal informatIon With respect to any SecUrities referred to herem