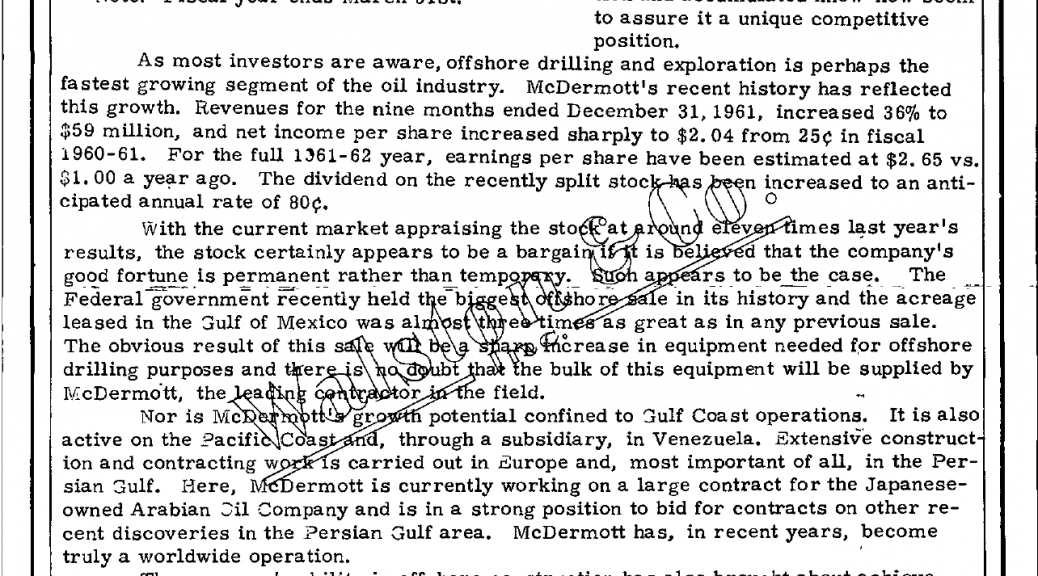 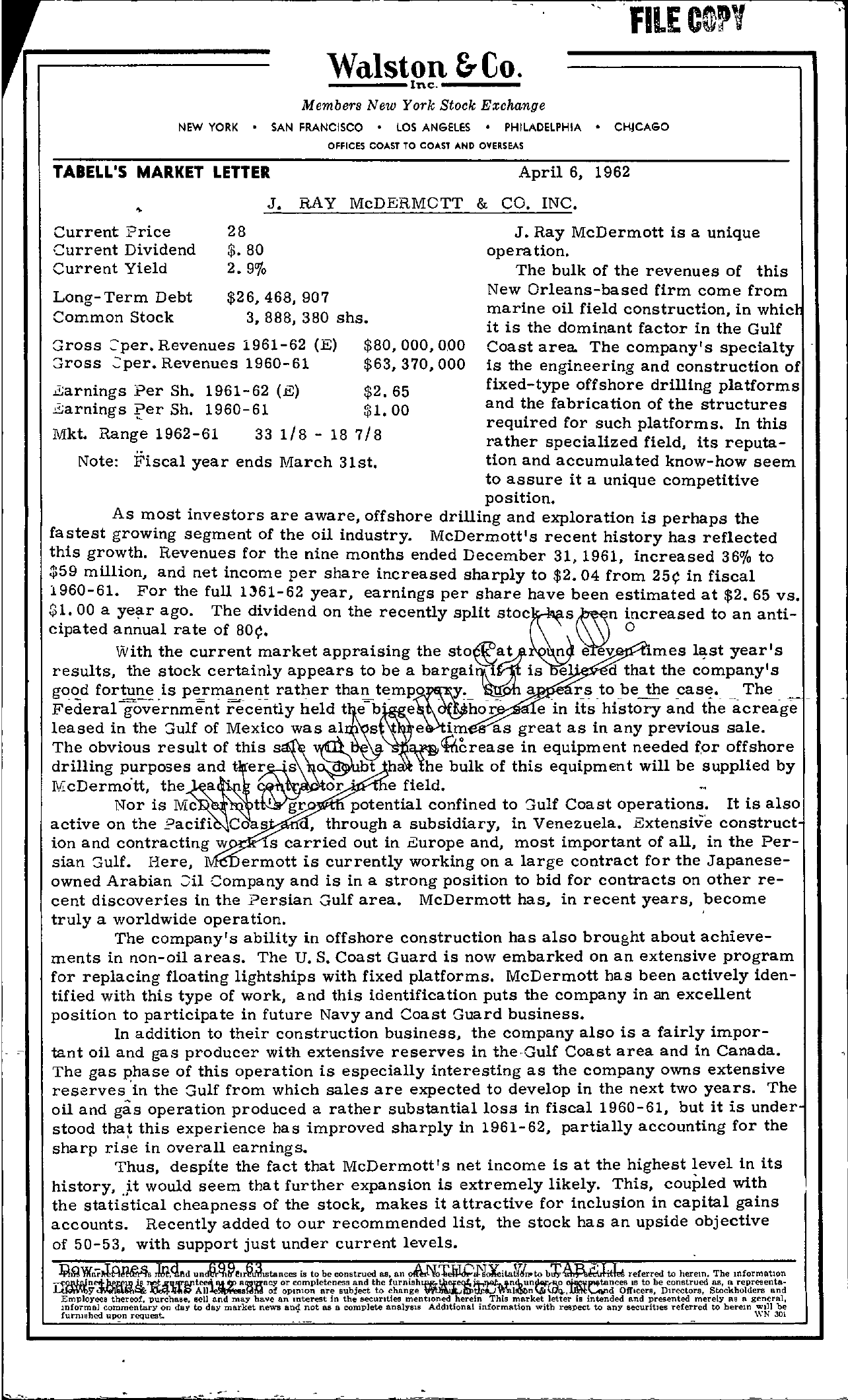 'FILE CCPV Walston &CO. —-Inc, ;….;…..;….;..; Members New York Stock Exchange NEW YORK SAN FRANCISCO LOS ANGELES PHILADELPHIA CHJCAGO OFFICES COAST TO COAST AND OVERSEAS TABEll'S MARKET lETTER April 6, 1962 J. RAY McDERMOTT & CO. INC. Current Price Current Dividend Current Yield 2S . SO 2.9 J. Ray McDermott is a unique operation. The bulk of the revenues of this Long-Term Debt Common Stock 26,468,907 3, S8S, 3S0 shs. New Orleans-based firm come from marine oil field construction, in whic it is the dominant factor in the Gulf Gross 'per. Revenues 1961-62 (E) SO, 000, 0.00 Coast area. The company's specialty Gross 1960-61 63,370,000 is the engineering and construction of Per Sh. 1961-62 (E) fer Sh. 1960-61 2.65 1. 00 Mkt. Range 1962-61 33 lIs – IS 7/s fixed-type offshore drilling platforms and the fabrication of the structures required for such platforms. In this rather specialized field, its reputa- Note Fiscal year ends March 31st. tion and accumulated know-how seem to assure it a unique competitive position. As most investors are aware, offshore drilling and exploration is perhaps the fastest growing segment of the oil industry. McDermott's recent history has reflected this growth. Revenues for the nine months ended December 31,1961, increased 360/0 to 59 million, and net income per share increased sharply to 2.04 from 25t; in fiscal 1960-61. For the full 1361-62 year, earnings per share have been estimated at 2. 65 vs. 1. 00 a ago. The dividend on the recently split cipated annual rate of SOt;. increased to an anti0 With the current market appraising the n e ev lmes year's results, the stock certainly appears to be a bargai 1 is e' iI that the company's good fortune is permanent rather than Federal-go;ernment recently held leased in the 3ulf of Mexico was al s a rs to be the case. The e 'hor' 'ein its' history and the 'acreage ' e im as great as in any previous sale. The obvious result of drilling and t er 's in equipment needed (or offshore h 1he bulk of this equipment will be supplied by IVlcDermott, the a' or ' e field. – Nor is Mc t' gr potential confined to 3ulf Coast operations. It is also active on the Pacifi Coas , through a subsidiary, in Venezuela. Extensive construct is carried out in Europe and, most important of all, in the Per- sian 3ulf. Here, ermott is currently working on a large contract for the Japanese- owned Arabian ;)il Company and is in a strong position to bid for contracts on other recent discoveries in the Persian Gulf area. McDermott has, in recent years, become truly a worldwide operation. The company's ability in offshore construction has also brought about achieve- ments in non-oil areas. The U. S. Coast Guard is now embarked on an extensive program for replacing floating lightships with fixed platforms. McDermott has been actively identified with this type of work, and this identification puts the company in an excellent position to participate in future Navy and Coast Guard business. In addition to their construction business, the company also is a fairly impor- tant oil and gas producer with extensive reserves in the,Gulf Coast area and in Canada. The gas phase of this operation is especially interesting as the company owns extensive reserves 'in the Gulf from which sales are expected to develop in the next two years. The oil and gas operation produced a rather substantial loss in fiscal 1960-61, but it is under stood that this experience has improved sharply in 1961-62, partially accounting for the sharp rise in overall earnings. Thus, despite the fact that McDermott's net income is at the highest level in its history, it would seem that further expansion is extremely likely. This, coupled with the statistical cheapness of the stock, makes it attractive for inclusion in capital gains accounts. Recently added to our recommended list, the stock has an upside objective of 50-53, with support just under current levels. JiiIM undtQl91!lrMlstances is to be construed as, an bJ;MZJL referred to herem. The mformatton -;-1'Ql\J;Djned-hfflt)l;Ile 1M lip or completeness and the okc\tptetances IS to be construed as, a representa of OPinIon are subject t() change Officers, DIrectors, Stockholders Qnd EmpIOYC'CB theroof, purchase, sell and may have an mterest in the securities mentioned herein This market letter is intended and presented merely as a general, mformDI commentary on day to day market news and not as B complete analYSIS Additional information with respect to any securitIes referred to herCln Will be furnished upon r e q u e s t . -, – \\'N 301