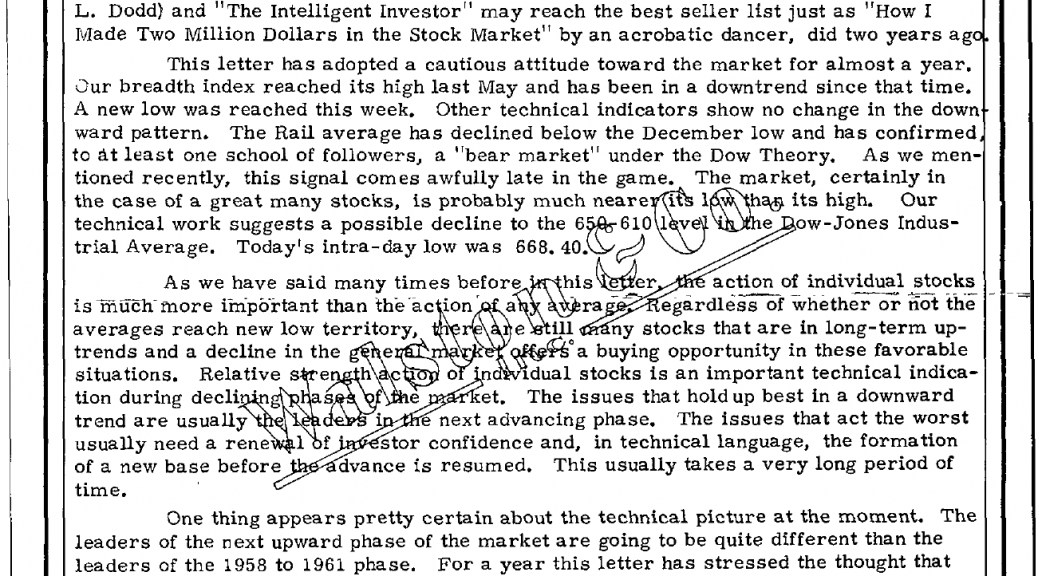 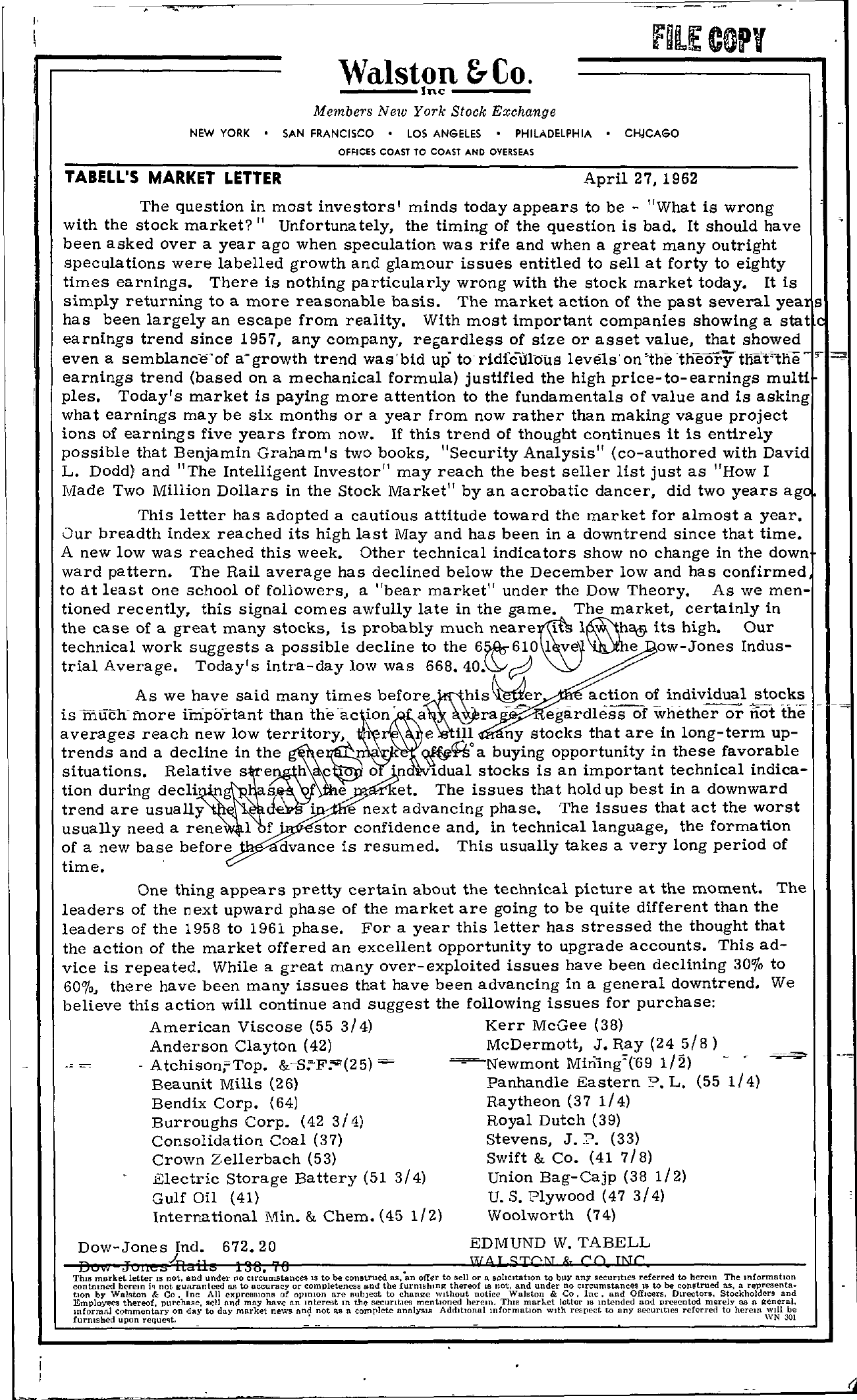 4' , I, I Walston &- Co. lnc – – – – – Membe)'s New York Stock Exchange NEW YORK SAN FRANCISCO LOS ANGELES PHILADELPHIA CH.lCAGO OFFICES COAST TO COAST AND OVERSEAS TABELL'S MARKET LETTER April 27, 1962 The question in most investors' minds today appears to be – What is wrong with the stock market Unfortunately, the timing of the question is bad. It should have been asked over a year ago when speculation was rife and when a great many outright speculations were labelled growth and glamour issues entitled to sell at forty to eighty times earnings. There is nothing particularly wrong with the stock market today. It is simply returning to a more reasonable basis. The market action of the past several yeaI s has been largely an escape from reality. With most important companies showing a statlc earnings trend since 1957, any company, regardless of size or asset value, that showed even a semblance'of a-growth trend was'bid up toridfc-lilO\lS levels'on'thedneorytnal'lhe-'–' earnings trend (based on a mechanical formula) justified the high price-to-earnings multi pIes. Today's market is paying more attention to the fundamentals of value and is asking what earnings may be six months or a year from now rather than making vague project ions of earnings five years from now. If this trend of thought continues it is entirely possible that Benjamin Graham's two books, Security Analysis (co-authored with David L. Dodd) and The Intelligent Investor may reach the best seller list just as How I JvIade Two Million Dollars in the Stock Market by an acrobatic dancer, did two years ago This letter has adopted a cautious attitude toward the market for almost a year. Our breadth index reached its high last May and has been in a downtrend since that time. A new low was reached this week. Other technical indicators show no change in the down ward pattern. The Rail average has declined below the December low and has confirmed to at least one school of followers, a bear market under the Dow Theory. As we men- tioned recently, this signal comes awfully late in the game. The market, certainly in the case of a great many stocks, is probably much its high. Our technical work suggests a possible decline to the I v \ijJfue ow-Jones Indus- trial Average. Today's intra-day low was 668. As we have said many times action of individual stocks is much' more impo'rtant than the a ' ra – whetheror not the averages reach new low territory, e stocks that are in long-term up- trends and a decline in the a buying opportunity in these favorable situations. Relative ldual stocks is an important technical indica- tion during e The issues that hold up best in a downward trend are i e next advancing phase. The issues that act the worst usually need a rene'\4tl bf . stor confidence and, in technical language, the formation of a new base before dvance is resumed. This usually takes a very long period of time. One thing appears pretty certain about the technical picture at the moment. The leaders of the next upward phase of the market are going to be quite different than the leaders of the 1958 to 1961 phase. For a year this letter has stressed the thought that the action of the market offered an excellent opportunity to upgrade accounts. This advice is repeated. While a great many over-exploited issues have been declining 300/0 to 600/0, there have been many issues that have been advancing in a general downtrend. We believe this action will continue and suggest the following issues for purchase American Viscose (55 3/4) Kerr McGee (38) Anderson Clayton (42) &-S;-F;-(25) McDermott, J. Ray (24 5/8) '— Newmont 1/2) -. Beaunit Mills (26) Panhandle Eastern L. (55 1/4) Bendix Corp. (64) Raytheon (37 1/4) Burroughs Corp. (42 3/4) Royal Dutch (39) Consolidation Coal (37) Stevens, J. , (33) Crown Zellerbach (53) Swift & Co. (41 7/8) Electric Storage Battery (513/4) Union Bag-Cajp (38 1/2) Gulf Oil (41) U. S. Plywood (47 3/4) International Min. & Chern. (45 1/2) Woolworth (74) Dow-Jones Ind. 672.20 ES J .Ill 1 lSB 'fB EDMUND W. TABELL lATA T STcM 8T CO INC I I l