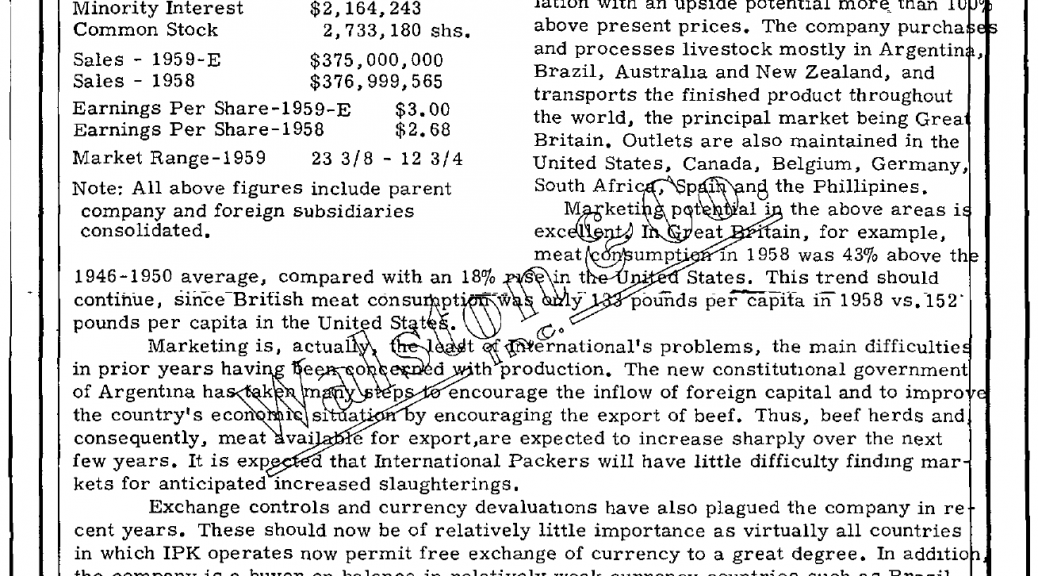 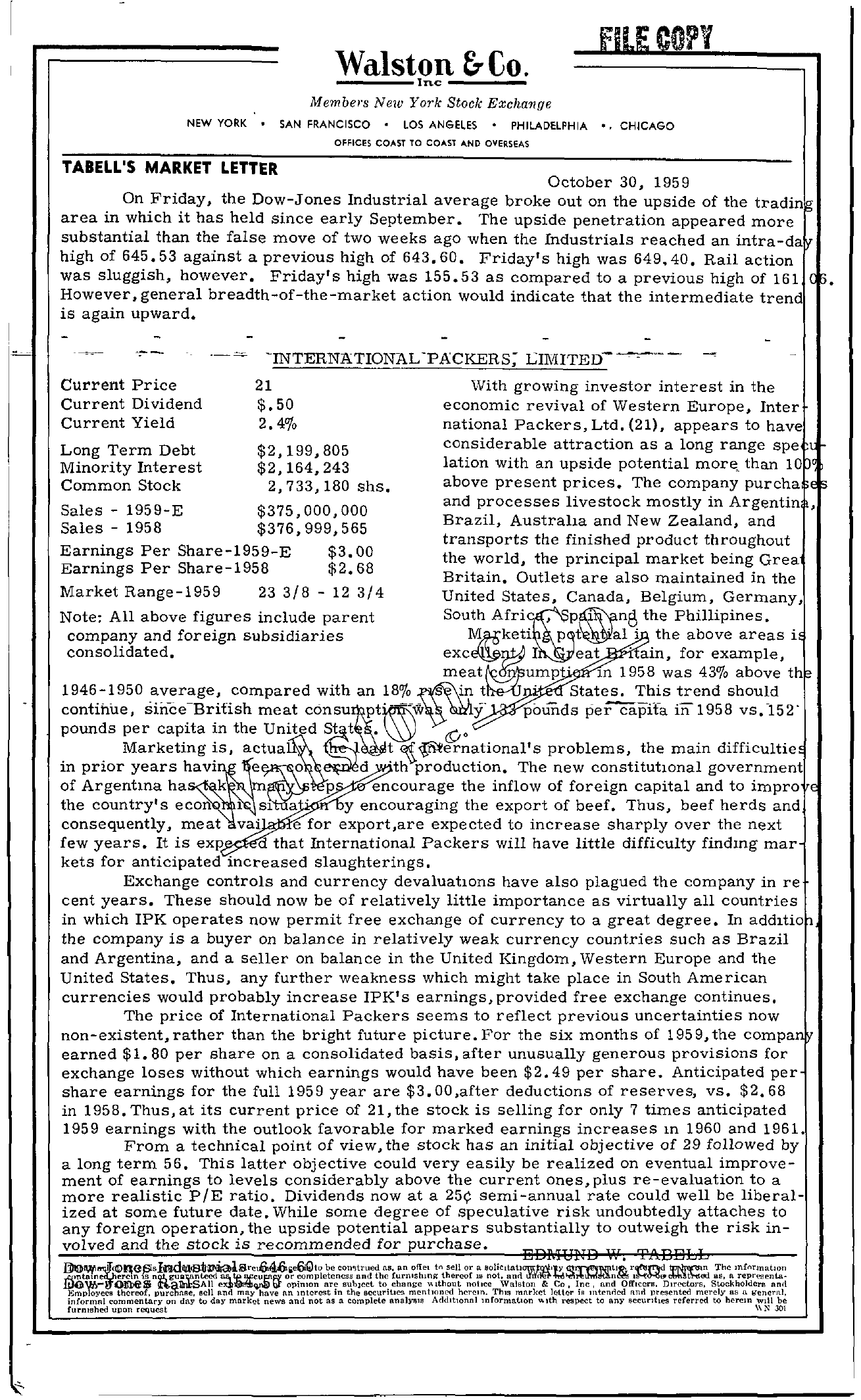 Walston &Co. – – – – – I n c – – – Opy Membe's New York Stock Exchange NEW YORK SAN FRANCISCO LOS ANGELES PHILADELPHIA CHICAGO OFFICES COAST TO COAST AND OVERSEAS TABELL'S MARKET LETTER October 30, 1959 On Friday, the Dow-Jones Industrial average broke out on the upside of the tradin area in which it has held since early September. The upside penetration appeared more substantial than the false move of two weeks ago when the Industrials reached an intra-da high of 645.53 against a previous high of 643.60. Friday's high was 649.40. Rail action was sluggish, however. Friday's high was 155.53 as compared to a previous high of 161 However, general breadth-of-the-market action would indicate that the intermediate trend is again upward. ,- Current Price 21 With growing investor interest in the Current Dividend Current Yield .50 2. 40/0 economic revival of Western Europe, Inter national Packers, Ltd. (21), appears to have Long Term Debt Minority Interest Common Stock 2,199,805 2,164,243 2,733,180 shs. Sales – 1959-E Sales – 1958 375,000,000 376,999,565 Earnings Per Share-1959-E Earnings Per Share-1958 3.00 2.68 Market Range-1959 23318 – 12 3/4 considerable attraction as a long range spe lation with an upside potential more, than 10 above present prices. The company purcha and processes livestock mostly in Argentin , Brazil, Austraha and New Zealand, and transports the finished product throughout the world, the principal market being Grea Britain. Outlets are also maintained in the United States, Canada, Belgium, Germany, Note All above figures include parent company and foreign subsidiaries consolidated. South M,.w;keti p I eat the Phillipines. i the above areas i 'ain, for example, 1946-1950 average, compared with an 180/0 ffirc m 1958 was 430/0 above th States. This trend should continue, siilce-British meat pounds per capita in the United t .W yo pounds percapifa ii11958 vs.152' Marketing is, t problems, the main difficultie in prior years havi em d 'th production. The new constituhonal government of Argentma ha k p encourage the inflow of foreign capital and to impro the country's econ Sl a' y encouraging the export of beef. Thus, beef herds and consequently, meat vai e for export,are expected to increase sharply over the next few years. It is exp a that International Packers will have little difficulty findmg mar kets for anticipated increased slaughterings. Exchange controls and currency devaluahons have also plagued the company in re cent years. These should now be of relatively little importance as virtually all countries in which IPK operates now permit free exchange of currency to a great degree. In add1tio the company is a buyer on balance in relatively weak currency countries such as Brazil and Argentina, and a seller on balance in the United Kingdom, Western Europe and the United States. Thus, any further weakness which might take place in South American currencies would probably increase IPK's earnings, provided free exchange continues. The price of International Packers seems to reflect previous uncertainties now non-existent, rather than the bright future picture. For the six months of 1959, the compa earned 1. 80 per share on a consolidated basis, after unusually generous provisions for exchange loses without which earnings would have been 2.49 per share. Anticipated per share earnings for the full 1959 year are 3.00,after deductions of reserves, vs. 2.68 in 1958. Thus, at its current price of 21, the stock is selling for only 7 times anticipated 1959 earnings with the outlook favorable for marked earnings increases m 1960 and 1961. From a technical point of view, the stock has an initial objective of 29 followed by a long term 56. This latter objective could very easily be realized on eventual improve- ment of earnings to levels considerably above the current ones, plus re-evaluation to a more realistic pIE ratio. Dividends now at a 25 semi-annual rate could well be liberal- ized at some future date. While some degree of speculative risk undoubtedly attaches to any foreign operation, the upside potential appears substantially to outweigh the risk in- volved and the stock is recommended for purchase. ElDF;TUPJD Vi. 'f'ttDELL be con'ltrued as, an offet tn sell or a soiicltntJamM,'fY IJJNwuln The mCnrmntlOn .fiI)nOtnWln r oerncien IsS n gua ntecd eu or completeness and the furnishing thereof IS not. and lk.4SlJ' opinIon are suhJect to changc ,\\lthout notlcc Walston & Co, Inc, and OffIcer!!, as, n representa Stockholdcrs nnd J;mployccs thereof, purcnnRe, sell and may have nn mtcrest in thc s()!uritles mcntlOnoo hercm. ThIS mnrkct letter is llltenrled II.nrl ptcscnted mcrely as a !l'cncrnl, informal commentary on dny to day market news and not ns Do complete analysll; AdditIOnal mformatlon '\\lth respect to any tecuntU referroo to herem Will be furnished upon request \\ N 301