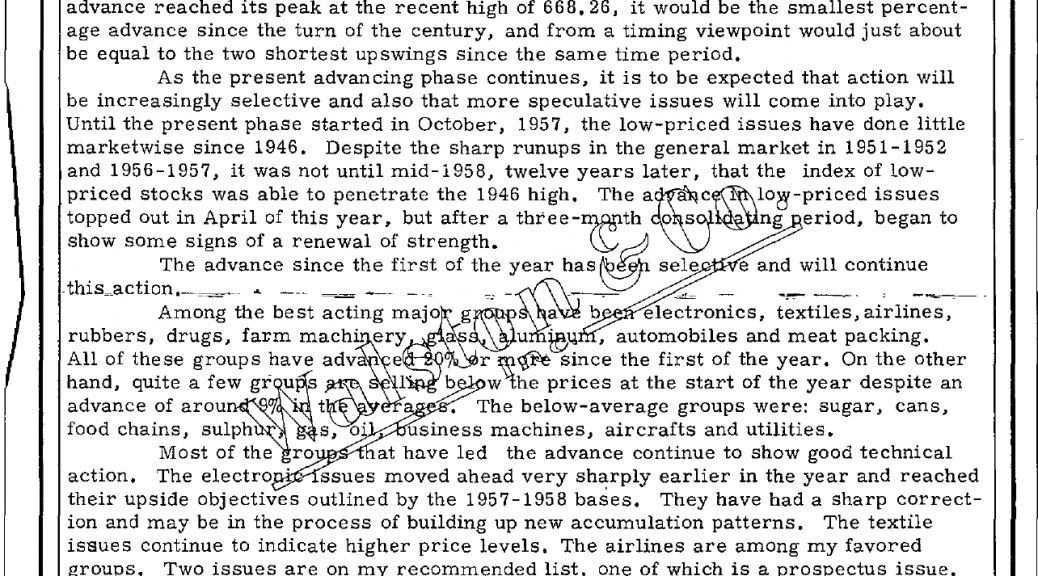 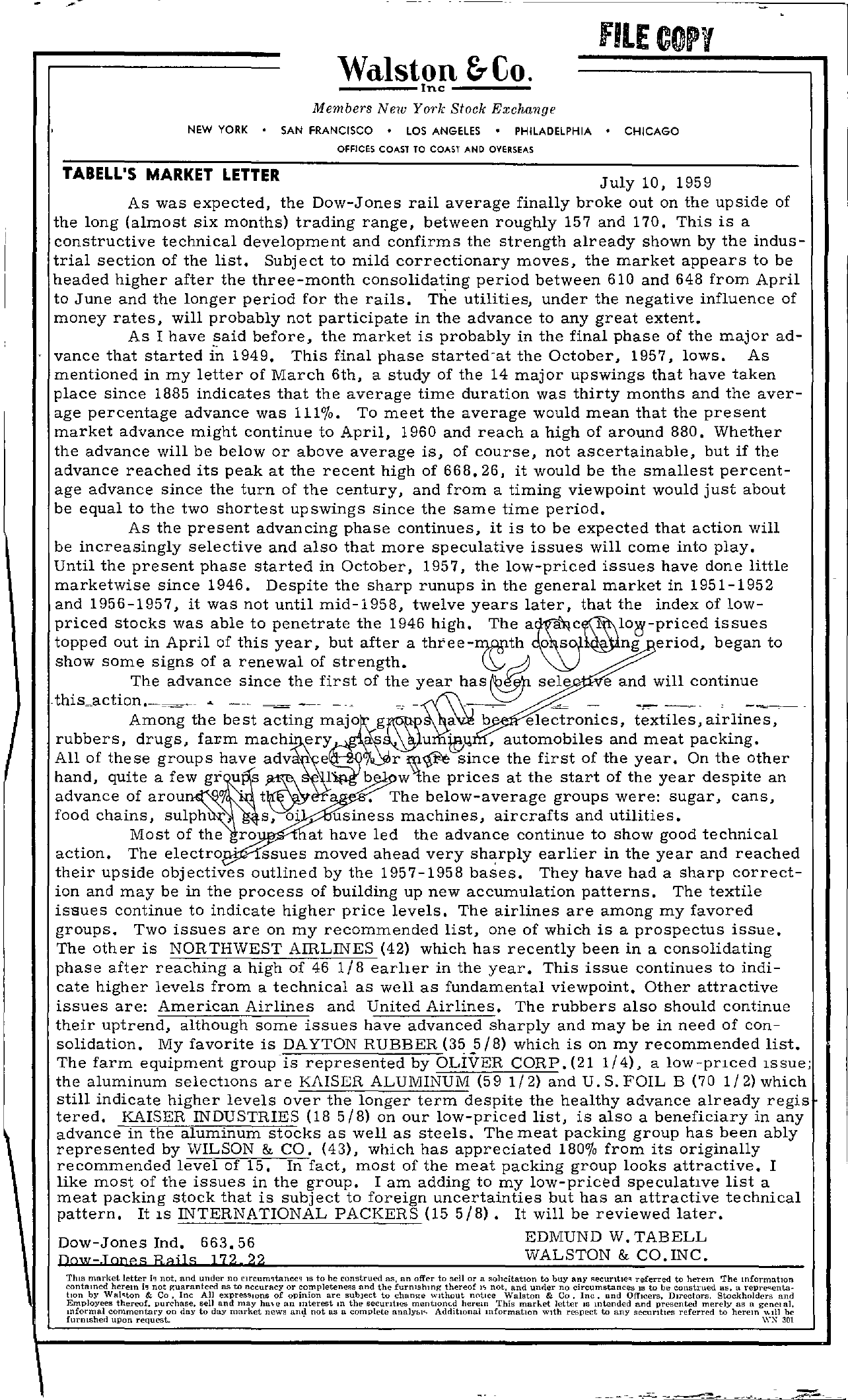 Walston Inc -&—C-o-. fiLE COpy Members New Ym'k Stock Exchange NEW YORK SAN FRANCISCO LOS ANGELES PHILADELPHIA CHICAGO OFFICES COAST TO COAST AND OVERSEAS TABELL'S MARKET LETTER July 10, 1959 As was expected, the Dow-Jones rail average finally broke out on the upside of the long (almost six months) trading range, between roughly 157 and 170. This is a constructive technical development and confirms the strength already shown by the indus- trial section of the list. Subject to mild correctionary moves, the market appears to be headed higher after the three-month consolidating period between 610 and 648 from April to June and the longer period for the rails. The utilities, under the negative influence of money rates, will probably not participate in the advance to any great extent. As I have .said before, the market is probably in the final phase of the major ad- vance that started in 1949. This final phase startedat the October, 1957, lows. As mentioned in my letter of March 6th, a study of the 14 major upswings that have taken place since 1885 indicates that the average time duration was thirty months and the aver- age percentage advance was 1110/0. To meet the average would mean that the present market advance might continue to April, 1960 and reach a high of around 880. Whether the advance will be below or above average is, of course, not ascertainable, but if the advance reached its peak at the recent high of 668.26, it would be the smallest percent- age advance since the turn of the century, and from a timing viewpoint would just about be equal to the two shortest upswings since the same time period. As the present advancing phase continues, it is to be expected that action will be increasingly selective and also that more speculative issues will come into play. Until the present phase started in October, 1957, the low-priced issues have done little marketwise since 1946. Despite the sharp runups in the general market in 1951-1952 and 1956-1957, it was not until mid-1958, twelve years later, that the index of low- priced stoc.kS able t.o penetrate the 1946 high. The issues topped out m Apnl of th1S year, but after a three-rwwth 0 s enod, began to show some signs of a renewal of strength. . . The advance since the first of the year has sele e and will continue 4 – . -0 co . ' . hand, quite a few gr u s l' b w'the prices at the start of the year despite an advance of arou . a The below-average groups were sugar, cans, food chains, sulph , s, o usiness machines, air crafts and utilities. Most of the ro at have led the advance continue to show good technical action. The electro' ssues moved ahead very shl;rply earlier in the year and reached their upside objectives outlined by the 1957-1958 bases. They have had a sharp correct- ion and may be in the process of building up new accumulation patterns. The textile issues continue to indicate higher price levels. The airlines are among my favored groups. Two issues are on my recommended list, one of which is a prospectus issue. The other is NORTHWEST AIRLINES (42) which has recently been in a consolidating phase after reaching a high of 46 1/8 earher in the year. This issue continues to indi- cate higher levels from a technical as well as fundamental viewpoint. Other attractive issues are American Airlines and United Airlines. The rubbers also should continue their uptrend, although some issues have advanced sharply and may be in need of con- solidation. My favorite is DAYTON RUBBER (355/8) which is on my recommended list. The farm equipment groupis represented by OLIVER CORP.(21 1/4), a low-pnced 1ssue; the aluminum selectlons are KAISER ALUMINUM (59 1/2) and U.S.FOIL B (70 1/2) which still indicate higher levels over the longer term despite the healthy advance already regiS teredo KAISER INDUSTRIES (18 5/8) on our low-priced list, is also a beneficiary in any advance in the aluminum stocks as well as steels. The meat packing group has been ably represented by WILSON & CO. (43), which has appreciated 1800/0 from its originally recommended level of 15. In fact, most of the meat packing group looks attractive. I like most of the issues in the group. I am adding to my low-priced speculahve list a meat packing stock that is subject to foreign uncertainties but has an attractive technical pattern. It 1S INTERNATIONAL PACKERS (155/8). It will be reviewed later. Dow-Jones Ind. 663.56 DQw-IOpeS Rails 72 22 EDMUND W. TAB ELL WALSTON & CO. INC. ThiS market letter not, and under no IS to he construed as, an offer to sell or a sohcitatlOn to buy any F;ecuntlel reierred to herem The lnfOrmutlOn contamed herem not v;uarnnteed as to accuracy or completeness and the furnlshmg thereof 1, not, and under no circumstances IS to be construed as, a reprccnta. bon by Walton & Co, Inc All expressIOns of opinion are subject to change Without notice Walston & Co, Inc, and Officers, Directors, Stockholders and Employees thereof, pure-hase, mformal commentary on day tsoelldaayndmmarakyethntlewe sananIdntneoretsatsilal the secUrities mentIOned herem This market letter IS illtended complete analy&!, AdditIOnal mformatIOn WIth resPect to any and presented merely as a genelal, secUrities referred to herem ,ill be furnished upon r e q u e s t . ' 301