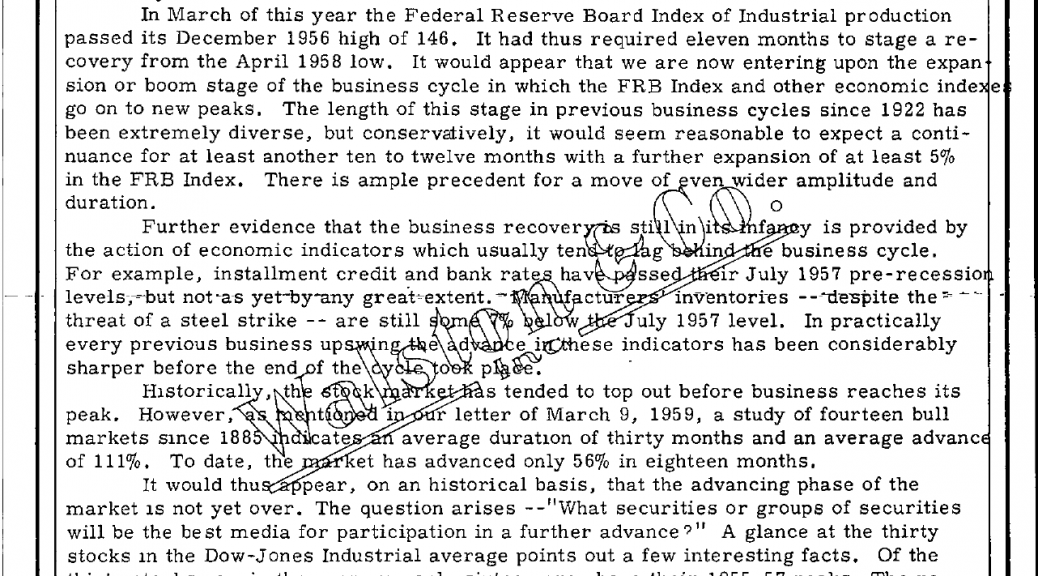 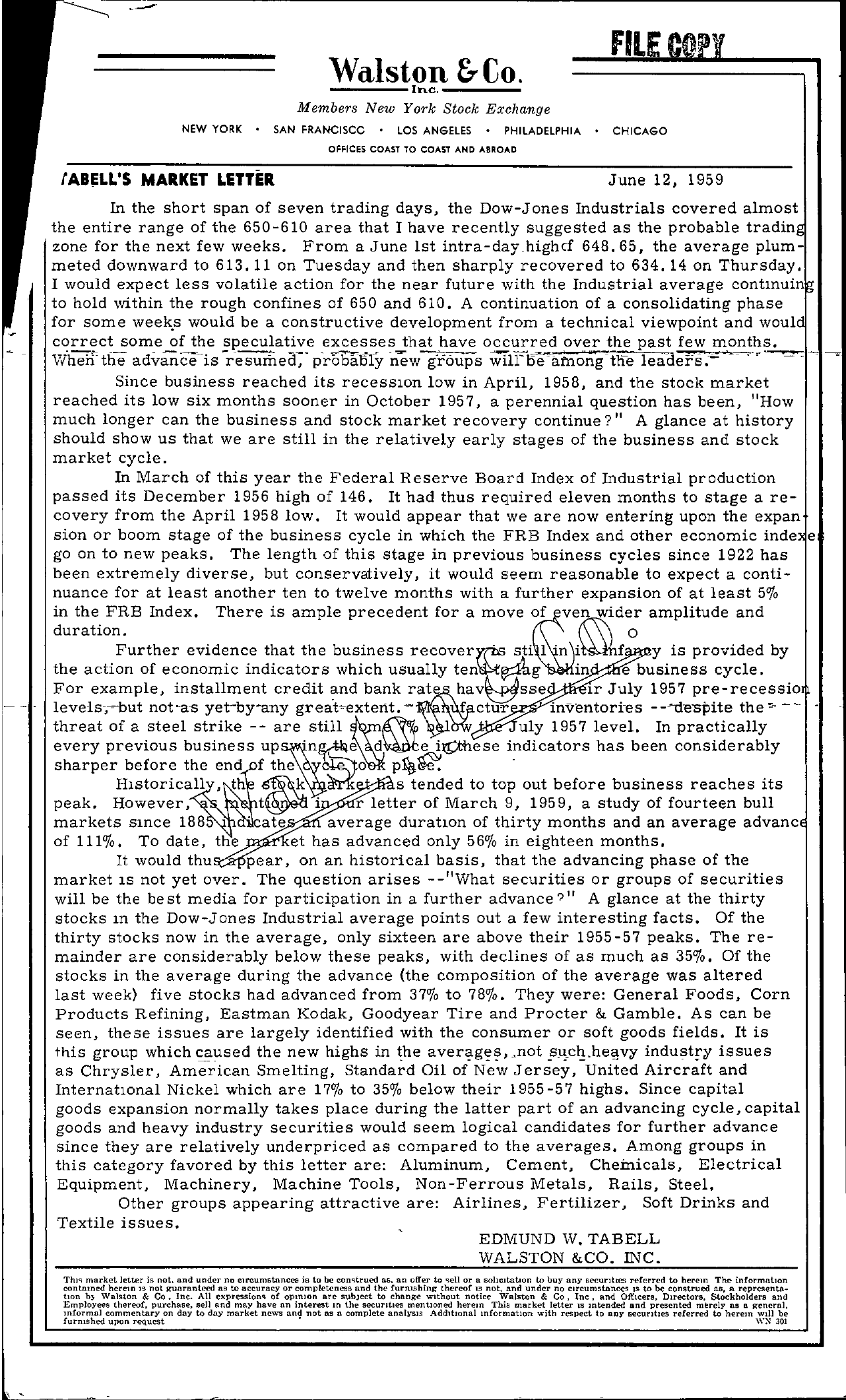 W—d-lIsntocn .&—C-o-. Members New York Stock Exchange FIL NEW YORK SAN FRANCISCC LOS ANGELES ' PHILADELPHIA CHICAGO OFFICES COAST TO COAST AND ABROAD lABELL'S MARKET LETTER June 12, 1959 In the short span of seven trading days, the Dow-Jones Industrials covered almost the entire range of the 650-610 area that I have recently suggested as the probable tradin zone for the next few weeks. From a June 1st intra-day.highcf 648.65, the average plum- meted downward to 613.11 on Tuesday and then sharply recovered to 634.14 on Thursday. I would expect less volatile action for the near future with the Industrial average contmuin to hold within the rough confines of 650 and 610. A continuation of a consolidating phase for some week,s would be a constructive development from a technical viewpoint and woul correct some of the speculative excesses that have occurred over the past few months. when the advancis -resumea- probaBly new Wiltl5e'among tfie leaders;– — Since business reached its receSSlOn low in April, 1958, and the stock market reached its low six months sooner in October 1957, a perennial question has been, How much longer can the business and stock market recovery continue A glance at history should show us that we are still in the relatively early stages of the business and stock market cycle. In March of this year the Federal Reserve Board Index of Industrial production passed its December 1956 high of 146. It had thus required eleven months to stage a re- covery from the April 1958 low. It would appear that we are now entering upon the expan sion or boom stage of the business cycle in which the FRB Index and other economic inde e go on to new peaks. The length of this stage in previous business cycles since 1922 has been extremely diverse, but conservatively, it would seem reasonable to expect a conti- nuance for at least another ten to twelve months with a further expansion of at least 5 in the FRB Index. There is ample precedent for a duration. ovenr\\w\ide0r amplitude and Further evidence that the business recoverr(is sti 1 'n y is provided by the action of economic indicators which usually in e business cycle. For example, installment credit and bank not as yet-by'any f ctUT 1r 1957 mv'entorres – –'oe-sp1te the ,- threat of a steel strike — are still uly 1957 level. In practically every previous business indicators has been considerably sharper before the end f the 0 . H1storicall ,th s tended to top out before business reaches its peak. However, i r letter of March 9, 1959, a study of fourteen bull markets smce 188 .cate average duratlOn of thirty months and an average advanc of 111. To date, et has advanced only 56 in eighteen months. It would thu pear, on an historical basis, that the advancing phase of the market 1S not yet over. The question arises –What securities or groups of securities will be the be st media for participation in a further advance A glance at the thirty stocks m the Dow-Jones Industrial average points out a few interesting facts. Of the thirty stocks now in the average, only sixteen are above their 1955-57 peaks. The re- mainder are considerably below these peaks, with declines of as much as 35. Of the stocks in the average during the advance (the composition of the average was altered last week) five stocks had advanced from 37 to 78. They were General Foods, Corn Products Refining, Eastman Kodak, Goodyear Tire and Procter & Gamble. As can be seen, the se issues are largely identified with the consumer or soft goods fields. It is this group which caused the new highs in the .not indust!'Y issues as Chrysler, American Smelting, Standard Oil of New Jersey, United Aircraft and InternatlOnal Nickel which are 17 to 35 below their 1955-57 highs. Since capital goods expansion normally takes place during the latter part of an advancing cycle, capital goods and heavy industry securities would seem logical candidates for further advance since they are relatively underpriced as compared to the averages. Among groups in this category favored by this letter are Aluminum, Cement, Cheinicals, Electrical Equipment, Machinery, Machine Tools, Non-Ferrous Metals, Rails, Steel. Other groups appearing attractive are Airlines, Fertilizer, Soft Drinks and Textile issues. EDMUND W. TABELL WALSTON &CO. INC. Thl'l market letter is not, and under no clrcumstnnces is to be con'ltrued as, an offer to 'ell or a soliCitation to buy any secuntIes referred to herem The- information contained herein IS not Ruaranteed as to accuracy or compJetene!lS nnd the furnishing thereof IS not, and under no circumstances IS to be construed o.s, a reprcsenta hon b Walston & Co. Inc. All expressionq of opinion are subJect to change Without notice Walston & Co, Inc, and Officers, Directors, Stockholders and Employees thereof, purchase, sell and may ho.ve an interest In the SecUTltle5 mentIOned herem This market letter IS mtended and presented merely as a general, mformal commentary on day to day market and not as a complete analYSIS furmshed upon r e q u e s t ' Additional informatIOn with respect to any securities referred to h-erem wW-ill be J01