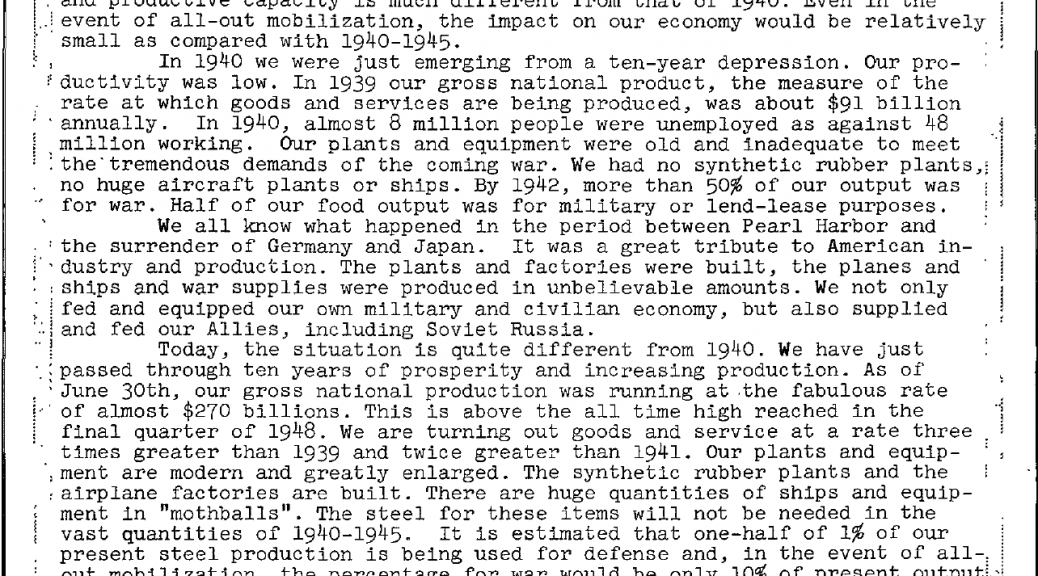 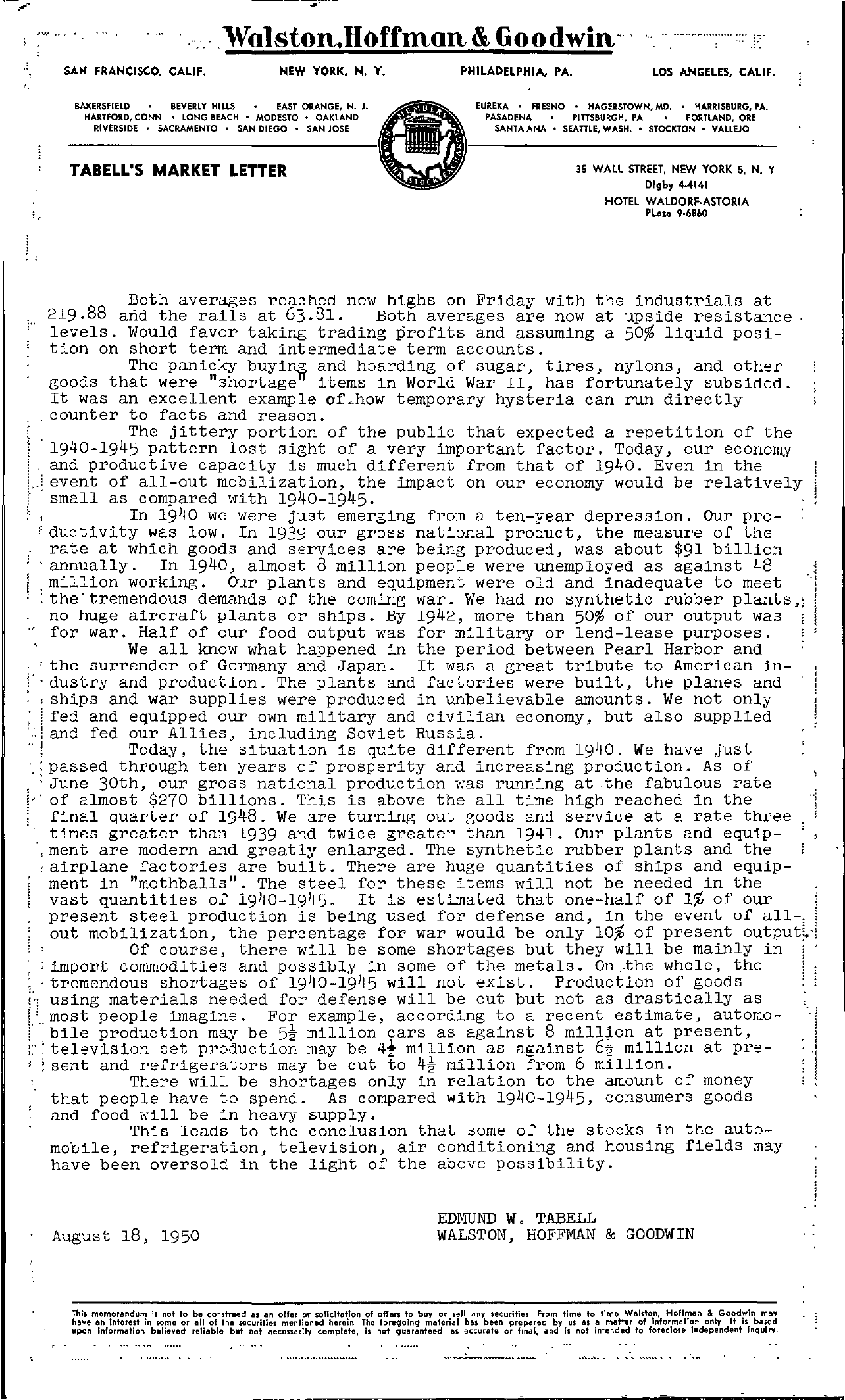 r–;;'- —— – – Wolston.Hoffmon &, Goodwin' , SAN FRANCISCO, CALIF. NEW YORK, N. Y. PHILADELPHIA, PA. LOS ANGELES, CALIF. BAKERSFIELD BEVERLY HILLS EAST ORANGE, N. J. HARTFORD, CONN LONG BEACH MODESTO OAKLAND RIVERSIDE SACRAMENTO SAN DIEGO SAN JOSE EUREKA FRESNO HAGERSTOWN, MD. HARRISBURG, fA. PASADENA PlnSaURGH, fA PORTLAND, ORE SANTA ANA SEAnLE, WASH. STOCKTON' VALLEJO TABELL'S MARKET LETTER 35 WALL STREET, NEW YORK 5, N. Y Digby 4-4141 HOTEL WALDORFASTORIA PLa.. 96160 Both averages reached new highs on Friday with the industrials at 219.88 and the rails at 63.81. Both averages are now at upside resistance levels. Would favor taking trading profits and assuming a 50 liquid posi- tion on short term and intermediate term accounts. The panicky buying and hoarding of sugar, tires, nylons, and other goods that were shortage items in World War II, has fortunately subSided. It was an excellent example ofhow temporary hysteria can run directly , counter to facts and reason. The jittery portion of the public that expected a repetition of the , 1940-1945 pattern lost sight of a very important factor. Today, our economy , ' and productive capacity is much different from that of 1940. Even in the !,.i event of all-out mobilization, the impact on our economy would be relatively ' small as compared with 1940-1945. , , In 1940 we were just emerging from a ten-year depression. Our pro- i'ductivity was low. In 1939 our gross national product, the measure of the rate at which goods and services are being produced, was about 91 billion . annually. In 1940, almost 8 million people were unemployed as against 48 ' i . million working. Our plants and equipment were old and inadequate to meet ..' , the' tremendous demands of the coming war. We had no synthetic rubber plants ,i i Ino huge aircraft plants or ships. By 1942, more than 50 of our output was ., for war. Half of our food output was for military or lend-lease purposes. ' We all know what happened in the period between Pearl Harbor and 'the surrender of Germany and Japan. It was a great tribute to American in- jdustry and production. The plants and factories were built, the planes and , ships and war supplies were produced in unbelievable amounts. We not only ; i fed and equipped our own military and civilian economy, but also supplied '1 and fed our Allies, including Soviet Russia . .. ! Today, the situation is quite different from 1940. We have just .passed through ten years of prosperity and increasing production. As of , . June 30th, our gross national production was running at the fabulous rate I' of almost 270 billions. This is above the all time high reached in the ..; I j final quarter of 1948. We are turning out goods and service at a rate three I '. times greater than 1939 and twice greater than 1941. Our plants and equip- ',ment are modern and greatly enlarged. The synthetic rubber plants and the airplane factories are built. There are huge quantities of ships and equip- ment in mothballs. The steel for these items will not be needed in the vast quantities of 1940-1945. It is estimated that one-half of 1 of our present steel production is being used for defense and, in the event of all-, . out mobilization, the percentage for war would be only 10 of present outputi.'j Of course, there will be some shortages but they will be mainly in ; impol1t commodities and possibly in some of the metals. On,.the whole, the ,tremendous shortages of 1940-1945 will not exist. Production of goods i' using materials needed for defense will be cut but not as drastically as ! '.. most people imagine. For example, according to a recent estimate, automo- i' .bile production may be 5 million cars as against 8 million at present, i i' television cet production may be 4 million as against 6 million at pre, sent and refrigerators may be cut to 4 million from 6 million. There will be shortages only in relation to the amount of money I that people have to spend. As compared with 1940-1945, consumers goods and food will be in heavy supply. This leads to the conclusion that some of the stocks in the auto- mobile, refrigeration, television, air conditioning and housing fields may have been oversold in the light of the above possibility. August 18, 1950 EDMUND W. TABELL WALSTON, HOFFMAN & GOODWIN This memorandum Is not to be construed as an offef or solldhltlon of offen to buy or 5811 tiny securltles, From time to time Walston, Hoffm!ln & Goodwin m!lY h!lv& an Interest In some or all of the securities mentioned herein The foregoing m!lterial hu been prep!lred by us as a matter of Information only It is bued upon Information believed renable but not necess!lrlly complete, Is not CJuerenteed !IS at';Uf!lte or fln!ll, and Is not Intended to foreclose Independent inquiry.