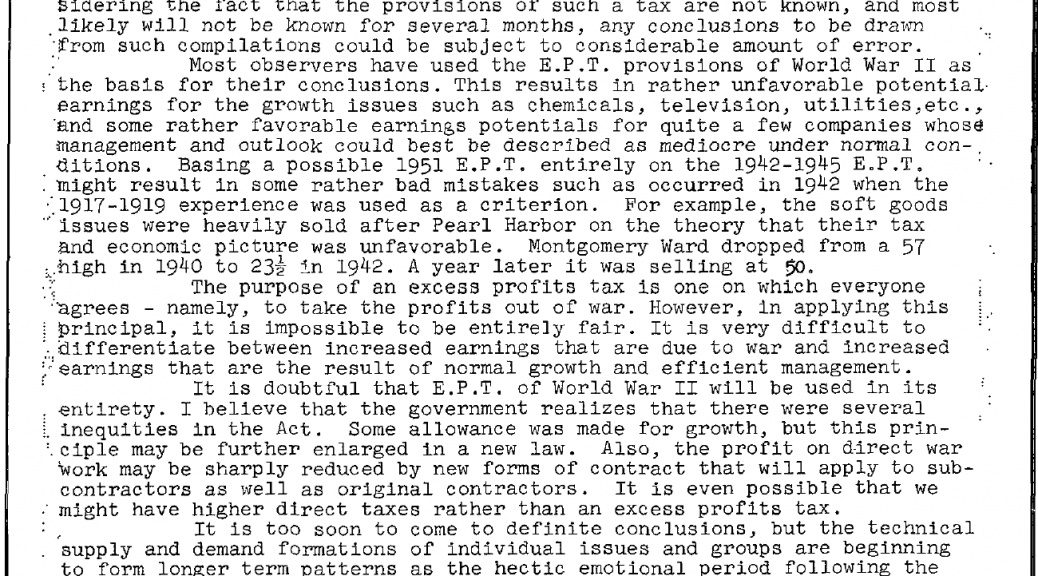 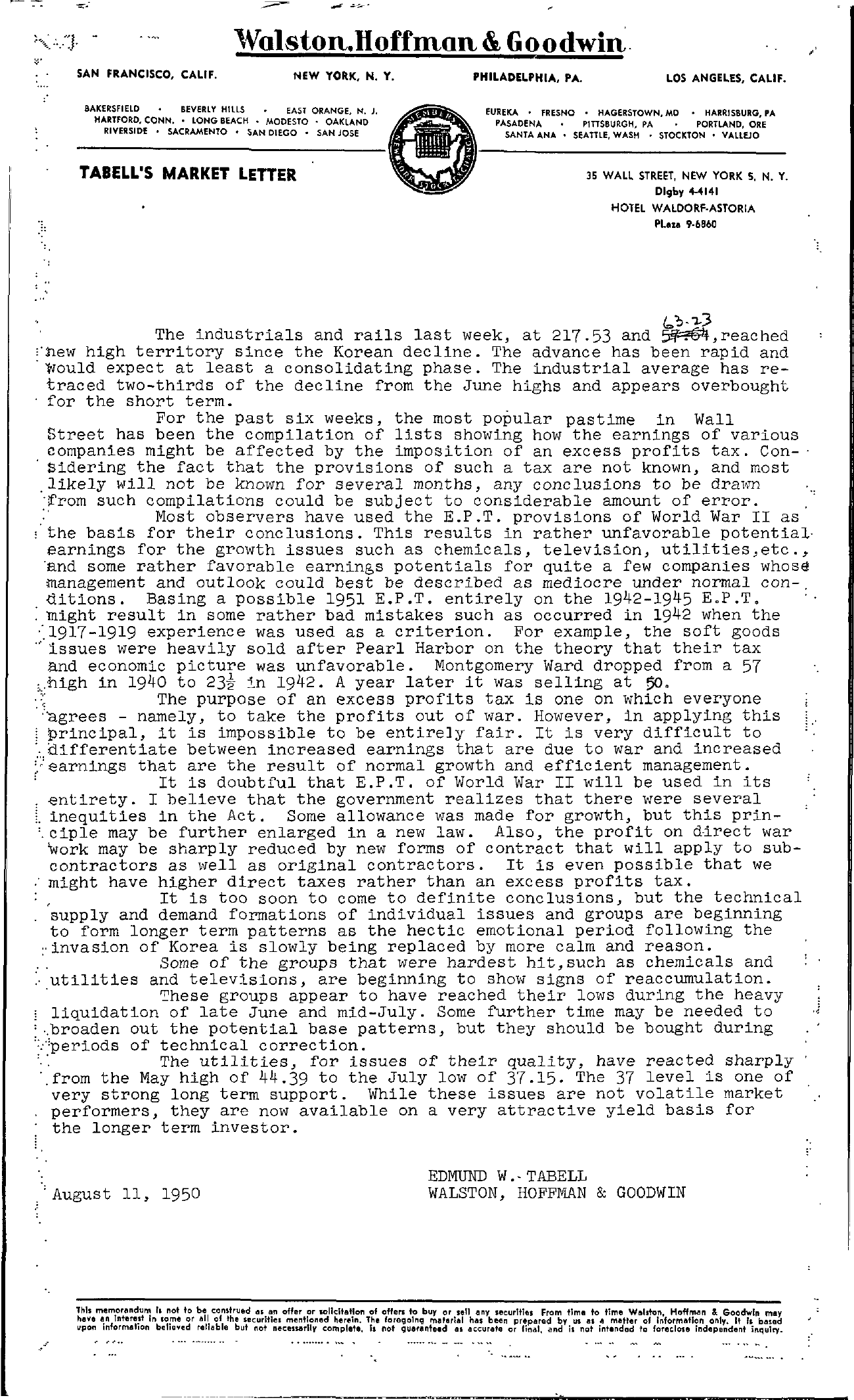 N! — '.' ., 'Volston.Hoffmon &. Goodwin. ;' SAN FRANCISCO. CALIF. NEW YORK. N. Y. PHILADELPHIA. PA. LOS ANGELES. CALIF. 8AKERSfiELD BEVERLY HILLS EAST ORANGE. N. J. HARTfORD, CONN. LONG BEACH MODESTO OAKLAND RIVERSIDE SACRAMENTO SAN DIEGO SAN JOSE EUREKA fRESNO HAGERSTOWN, MD HARRISBURG, PA PASADENA P1TISBURGH, PA PORTLAND, ORE SANTA ANA SEATTlE, WASH . STOCKTON VALLEJO TABELL'S MARKET LETTER 35 WALL STREET, NEW YORK 5. N. Y. Digby 4-4141 HOTEL WALDORFASTORIA PL… 96860 6- ..3 The industrials and rails last week, at 217.53 and ,reached ,'new high territory since the Korean decline. The advance has been rapid and ''Would expect at least a consolidating phase. The industrial average has re- traced two-thirds of the decline from the June highs and appears overbought for the short term. For the past six weeks, the most popular pastime in Wall Street has been the compilation of lists showing how the earnings of various companies might be affected by the imposition of an excess profits tax. Con-' Sidering the fact that the provisions of such a tax are not known, and most ,likely will not be known for several months, any conclusions to be drawn 'from such compilations could be subject to considerable amount of error. … Most observers have used the E.P.T. provisions of World War II as , the basis for their conclusions. This results in rather unfavorable potential, earnings for the growth issues such as chemicals, television, utilities,etc., 'and some rather favorable earnin6s potentials for quite a few companies whose management and outlook could best be described as mediocre under normal con-, tiitions. Basing a possible 1951 E.P.T. entirely on the 1942-1945 E.P.T. ' might result in some rather bad mistakes such as occurred in 1942 when the .1917 -1919 experience was used as a criterion. For example, the soft goods ..' issues were heavily sold after Pearl Harbor on the theory that their tax and economic picture was unfavorable. Montgomery Ward dropped from a 57 ;..high in 1940 to 23t in 1942. A year later it was selling at 50 . .; The purpose of an excess profits tax is one on which everyone .agrees – namely, to take the profits out of war. However, in applying this principal, it is impossible to be entirely fair. It is very difficult to ',differentiate between increased earnings that are due to war and increased ,' earnings that are the result of normal growth and efficient management. , It is doubtful that E.P.T. of World War II will be used in its , ntirety. I believe that the government realizes that there were several L inequities in the Act. Some allowance was made for growth, but this prin',ciple may be further enlarged in a new law. Also, the profit on direct war work may be sharply reduced by new forms of contract that will apply to sub- contractors as well as original contractors. It is even possible that we might have higher direct taxes rather than an excess profits tax. . It is too soon to come to definite conclusions, but the technical , supply and demand formations of individual issues and groups are beginning to form longer term patterns as the hectic emotional period following the .. invasion of Korea is slowly being replaced by more calm and reason. . Some of the groups that were hardest hit,such as chemicals and . utilities and televisions, are beginning to show signs of reaccumulation. , hese groups appear to have reached their lows during the heavy ; liquidation of late June and mid-July. Some further time may be needed to ., ' ..broaden out the potential base patterns, but they should be bought during ','periods of technical correction. . The utilities, for issues of their quality, have reacted sharply ',from the May high of 44.39 to the July low of 37.15. The 37 level is one of very strong long term support. While these issues are not volatile market performers, they are now available on a very attractive yield basis for the longer term investor. 'August 11, 1950 EDMUND W.,TABELL WALSTON, HOFFMAN & GOODWIN This heve muemIonrtaenredutmInhlon.mote to or be '.III con,trued ,n an offar or IOlldtatlon of of the securities mentioned here1n. The offers to buy or sell u forogolng matarlal hilS y securities From time been prepllred by us to as II timmaettWeralosftonIfoHromlflffmlonn & Goodwin may only. It Is bllsed IIpon Informahon behoved telleble bllt not necessarily complete, Is not guaranteed s accurate or fll'JllI, and is not Intended to foreclose Independent inqu1ry. ,..