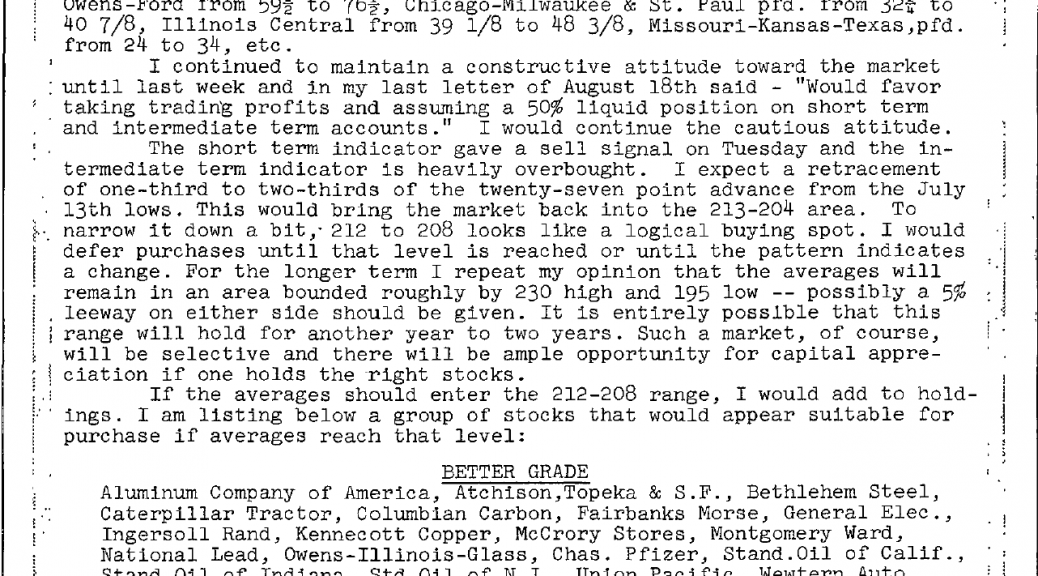 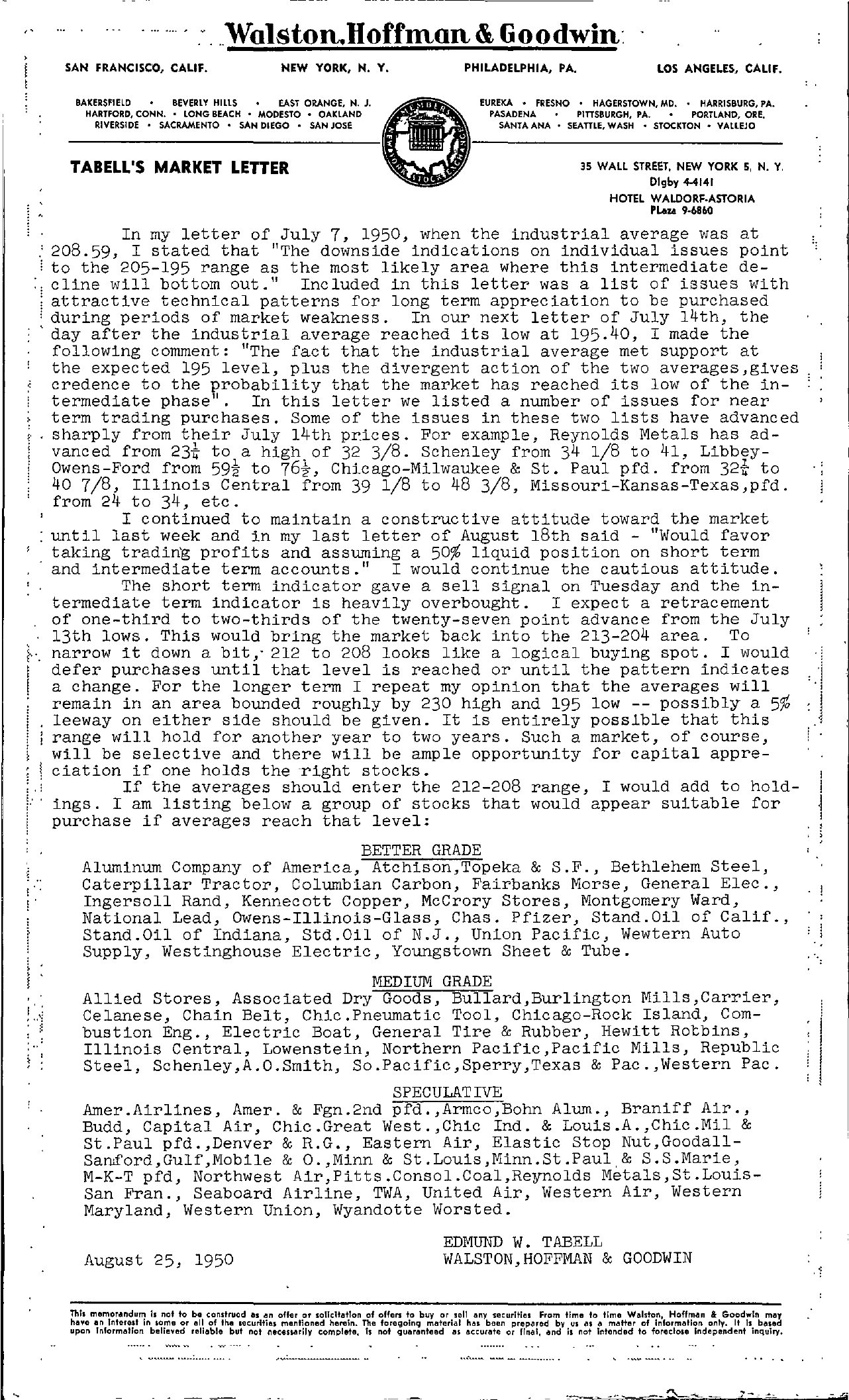 —————– — — – – – – – – – – – – – – – – – – ….Walston-Hoffman &, Goodwin SAN FRANCISCO, CALIF. NEW YORK, N. Y. PHILADELPHIA, PA. LOS ANGELES, CALIF. BAKERSFielD BEVERLY HillS EAST ORANGE, N. J. HARTfORD, CONN. LONG BEACH MODESTO OAKLAND RIVERSIDE SACRAMENTO SAN DIEGO SAN JOSE EUREKA FRESNO HAGERSTOWN, MD. HARRISBURG, PA. PASADENA PITTSBURGH, PA. PORTlAND, ORE. SANTA ANA SEATTLE, WASH STOCKTON VAllEJO TABELL'S MARKET LETTER 35 WALL STREET. NEW YORK 5, N. Y. Digby 4-4141 HOTEL WALDORF.ASTORIA pu… 96860 In my letter of July 7, 1950, when the industrial average was at 208.59, I stated that The downside indications on individual issues point to the 205-195 range as the most likely area where this intermediate de- cline will bottom out. Included in this letter was a list of issues with . attractive technical patterns for long term appreciation to be purchased ; during periods of market weakness. In our next letter of July 14th, the , day after the industrial average reached its low at 195.40, I made the following comment The fact that the industrial average met support at the expected 195 level, plus the divergent action of the two averages,gives credence to the probability that the market has reached its low of the in- termediate phase. In this letter we listed a number of issues for near term trading purchases. Some of the issues in these two lists have advanced . sharply from their July 14th prices. For example, Reynolds Metals has ad- i ! vanced from 23t to a high of 32 3/8. Schenley from 34 1/8 to 41, LibbeyOwens-Ford from 59 to 76, Chicago-Milwaukee & St. Paul pfd. from 32t to 1 40 7/8, Illinois Central from 39 1/8 to 48 3/8, Missouri-Kansas-Texas,pfd. from 24 to 34, etc. I continued to maintain a constructive attitude toward the market until last week and in my last letter of August 18th said – Would favor taking trading profits and assuming a 50 liqUid position on short term and intermediate term accounts. I would continue the cautious attitude. The short term indicator gave a sell signal on Tuesday and the in- termediate term indicator is heavily overbought. I expect a retracement of one-third to two-thirds of the twenty-seven point advance from the July 13th lows. This would bring the market back into the 213-204 area. To 1. narrow it down a bit,. 212 to 208 looks like a logical buying spot. I would defer purchases until that level is reached or until the pattern indicates '1 a change. For the longer term I repeat my opinion that the averages will 'j !remain in an area bounded roughly by 230 high and 195 low — possibly a 5 leeway on either side should be given. It is entirely possIble that this ., range will hold for another year to two years. Such a market, of course, will be selective and there will be ample opportunity for capital appre- ciation if one holds the right stocks. If the averages should enter the 212-208 range, I would add to hold- ings. I am listing below a group of stocks that would appear suitable for purchase if averages reach that level BETTER GRADE .. Aluminum Company of America, Atchison,Topeka & S.F., Bethlehem Steel, Caterpillar Tractor, Columbian Carbon, Fairbanks Morse, General Elec., Ingersoll Rand, Kennecott Copper, McCrory Stores, Montgomery Ward, National Lead, Owens-Illinois-Glass, Chas. Pfizer, Stand.Oil of Calif., Stand.Oil of Indiana, Std.Oil of N.J., Union PaCifiC, Wewtern Auto Supply, Westinghouse Electric, Youngstown Sheet & Tube. MEDIUM GRADE Allied Stores, Associated Dry Goods, Bullard,Burlington Mills,Carrier, ! , .'.,; Celanese, Chain Belt, Chic.Pneumatic Tool, Chicago-Rock Island, Com- .,. .1. bustion Eng., Electric Boat, General Tire & Rubber, Hewitt Rotbins, Illinois Central, Lowenstein, Northern Pacific,Pacific Mills, Republic Steel, Schenley,A.O.Smith, So.Pacific,Sperry,Texas & Pac.,Western Pac. SPECULATIVE Amer.Airlines, Amer. & Fgn.2nd pfd.,Armco,Bohn Alum., Braniff Air., Budd, Capital Air, Chic.Great West.,Chic Ind. & Louis.A.,Chic.Mil & St.Paul pfd.,Denver & R.G., Eastern Air, Elastic Stop Nut,GoodallSaruford,Gulf,Mobile & O.,Minn & St.Louis,Minn.St.Paul& S.S.Marie, M-K-T pfd, Northwest Air,Pitts.Consol.Coal,Reynolds Metals,St.Louis- San Fran., Seaboard Airline, TWA, United Air, Western Air, Western Maryland, Western Union, Wyandotte Worsted. August 25, 1950 EDMUND W. TABELL WALSTON,HOFFMAN & GOODWIN ,'I Thb memorandum Is not to be construod as an offer or solIeltatlon of offors to buy or sell any seuritilll From time to time Walston, Hoffman & Goodwin mey heye ,an Interest In lome or !!III of the &ecurlfies mentioned herein. The foregoing material h!!ll been prepared by Ul as a matter of information only. It Is based upon Information belleyed reliable but not necessarily complete, is not guaranteed a, accutate or final, and is not Intended to foredose Independent Inquiry. .. -,,.- – ..-…… .