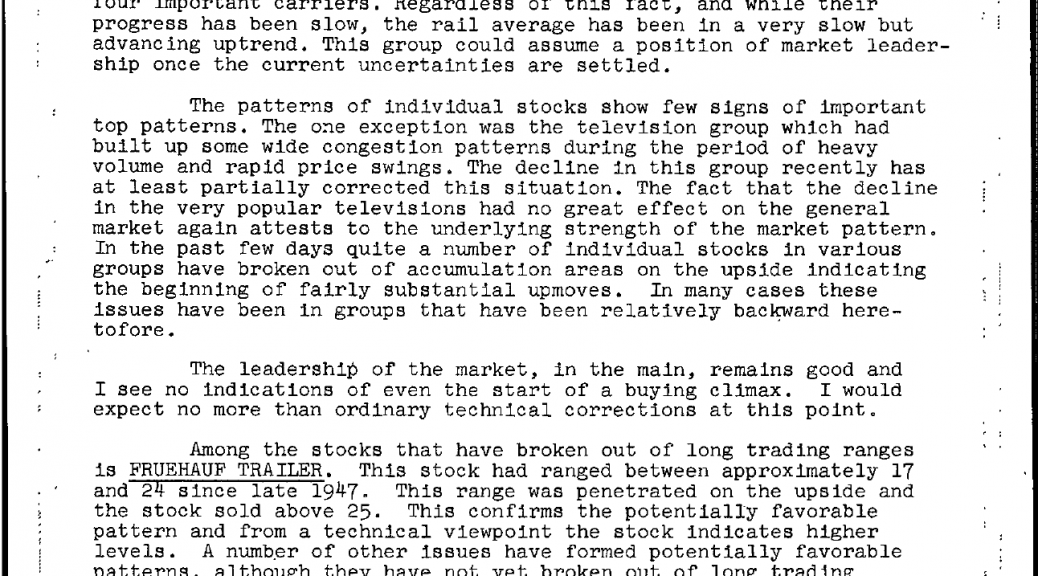 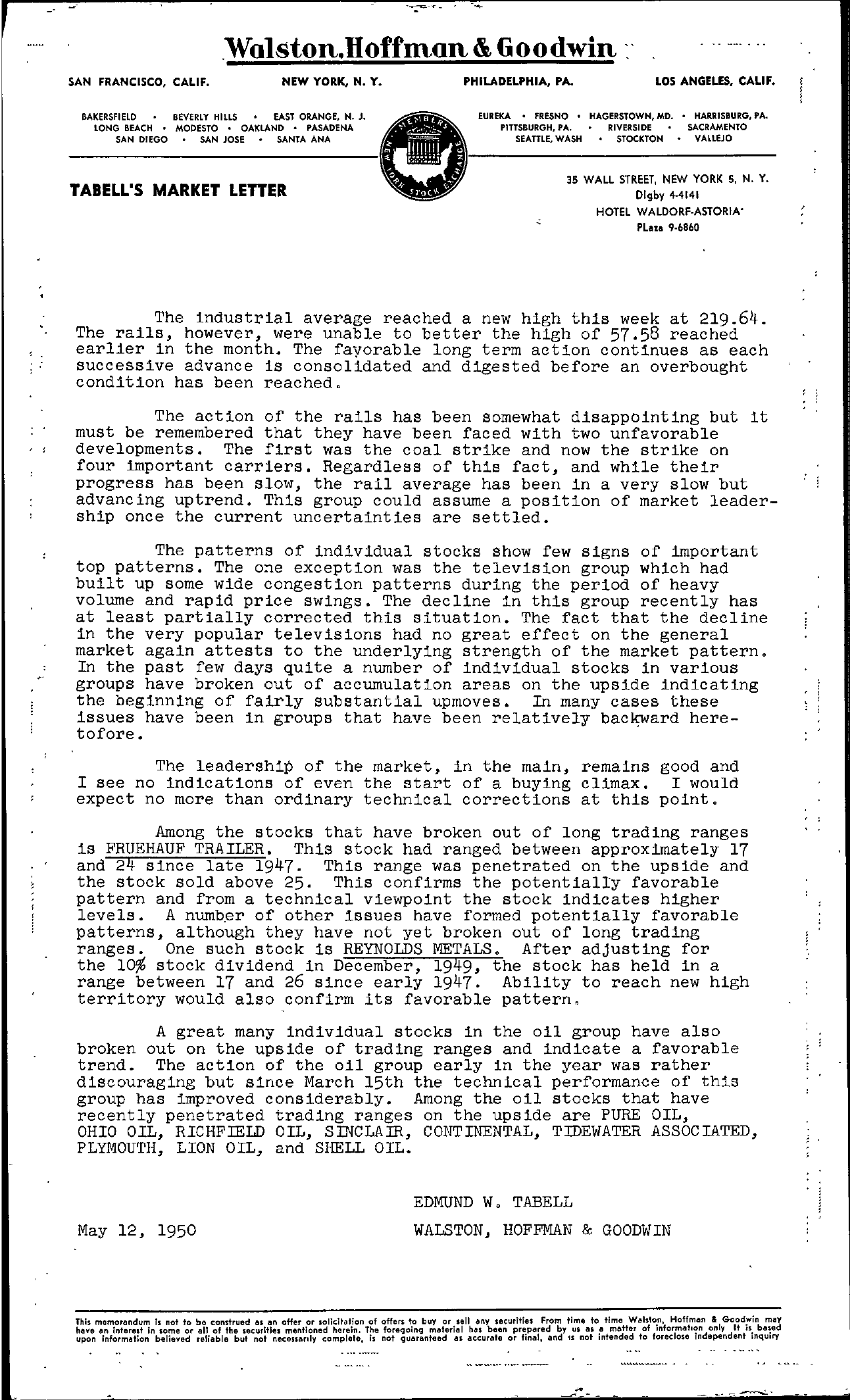 — .Wolston.Hoffmon &. Goodwin – SAN FRANCISCO, CALIF. NEW YORK, N. Y. PHILADELPHIA, PA. LOS ANGELES, CALIF. BAKERSFIELD BEVERLY HILLS EAST ORANGE, N. J. LONG BEACH MODESTO OAKLAND PASADENA SAN DIEGO SAN JOSE SANTA ANA EUREKA FRESNO HAGERSTOWN, MD. HARRISBURG, PA, PITTSBURGH, PA. RIVERSIDE SACRAMENTO SEATTLE, WASH STOCKTON VALLEJO TABELL'S MARKET LETTER 35 WALL STREET, NEW YORK 5, N. Y. Digby 4-4141 HOTEL WALDORF-ASTORIA' PLata 9-6860 The industrial average reached a new high this week at 219.64. The rails, however, were unable to better the high of 57.58 reached earlier in the month. The favorable long term action continues as each successive advance is consolidated and digested before an overbought condition has been reached. The action of the rails has been somewhat disappointing but it must be remembered that they have been faced with two unfavorable developments. The first was the coal strike and now the strike on four important carriers. Regardless of this fact, and while their progress has been Slow, the rail average has been in a very slow but advancing uptrend. This group could assume a position of market leadership once the current uncertainties are settled. The patterns of individual stocks show few signs of important top patterns. The oe exception was the television group which had built up some wide congestion patterns during the period of heavy volume and rapid price swings. The decline in this group recently has at least partially corrected this situation. The fact that the decline in the very popular televisions had no great effect on the general market again attests to the underlying strength of the market pattern. In the past few days quite a number of individual stocks in various groups have broken out of accumulation areas on the upside indicating the beginning of fairly substantial upmoves. In many cases these issues have been in groups that have been relatively backward here- tofore. . The leadership of the market, in the main, remains good and I see no indications of even the start of a buying climax. I would expect no more than ordinary technical corrections at this pOint. Among the stocks that have broken out of long trading ranges is FRUEHAUF TRAILER. This stock had ranged between approximately 17 and 24 since late 1947. This range was penetrated on the upside and the stock sold above 25. This confirms the potentially favorable pattern and from a technical viewpoint the stock indicates higher levels. A numb.er of other issues have formed potentially favorable patterns, although they have not yet broken out of long trading ranges. One such stock is REYNOLDS METALS. After adjusting for the 10 stock dividend in December, 1949, the stock has held in a range between 17 and 26 Since early 1947. Ability to reach new high territory would also confirm its favorable pattern. A great many individual stocks in the oil group have also broken out on the upside of trading ranges and indicate a favorable trend. The action of the oil group early in the year was rather discouraging but Since March 15th the technical performance of this group has improved considerably. Among the oil stocks that have recently penetrated trading ranges on the upside are PURE OIL, OHIO OIL, RICHFIELD OIL, SINCLAIR, CONTINENTAL, TIDEWATER ASSOCIATED, PLYMOUTH, LION OIL, and SHELL OIL. May 12, 1950 EDMUND W. TABELL WALSTON, HOFFMAN & GOODWIN This momorandum Is not hayti an Intared in some to or be all constnJed as an offer or solicitotion of of the securities mentioned herein. The offofreergsotiongbumyateorri.!!s1ellh.!a!snybeseencurpirtipe.s!!rFerdomby time us to as !l time Walsto.. Hoffman matter of Inform.!!tlon o&nlyGooIdt IS.inb.!m!l3eYd upon Information believed reliable but not necessarily complete, Is not guaranteed as accurate or final, and IS not Intended to foreclose Independent Inquiry