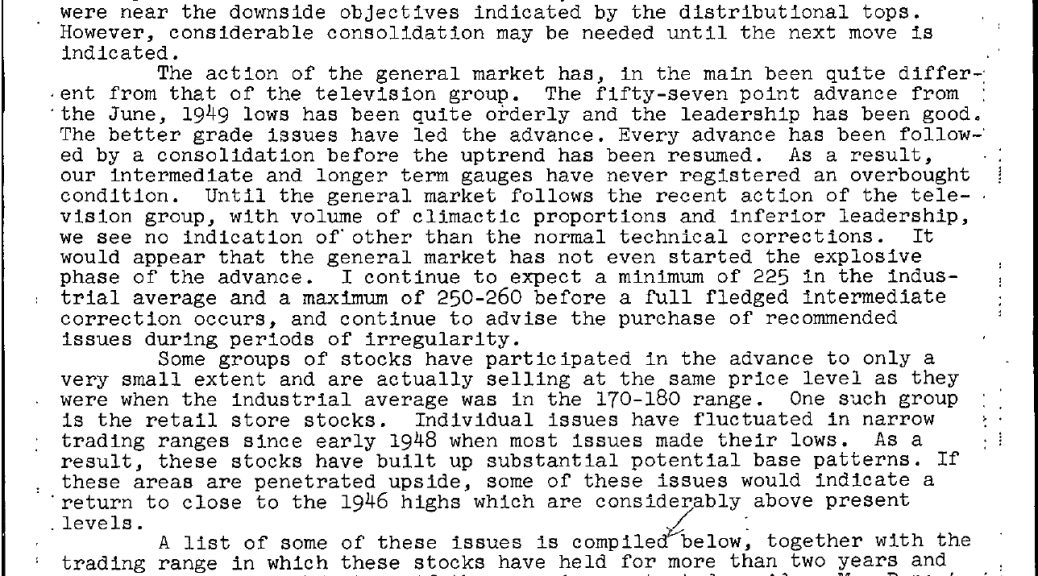 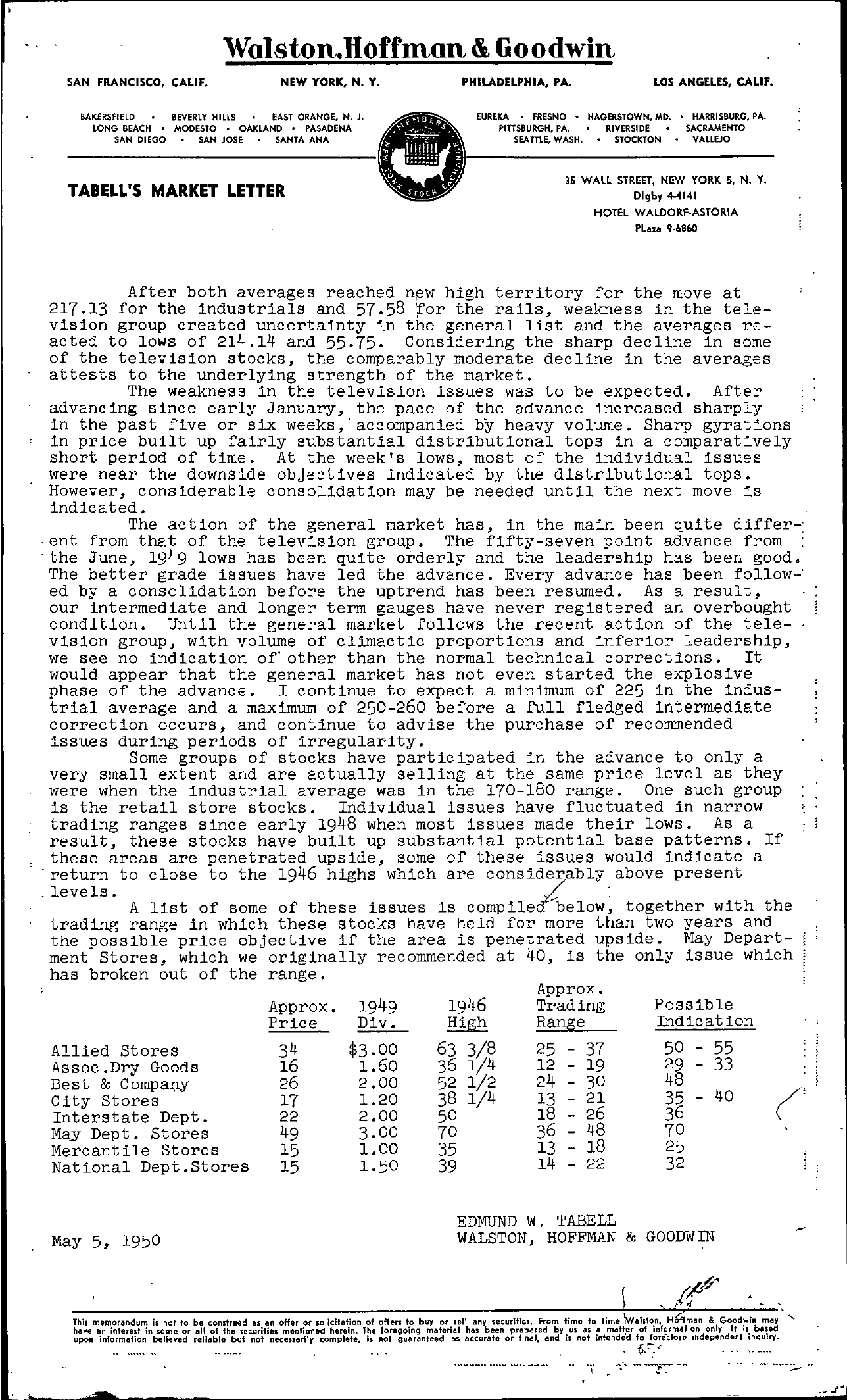 Wolston.Hoffmon &. Goodwin SAN FRANCISCO, CALIF. NEW YORK, N. Y. PHILADELPHIA, PA. LOS ANGELES, CALIF. BAKERSfiELD BEVERLY HILLS EAST ORANGE, N. J. LONG BEACH MODESTO OAKLAND PASADENA SAN DIEGO SAN JOSE SANTA ANA EUREKA FRESNO HAGERSTOWN, MD. HARRISBURG, PA. PITTSBURGH, PA. RIVERSIDE SACRAMENTO SEATTLE, WASH. STOCKTON VALLEJO TABELL'S MARKET LETTER 35 WALL STREET. NEW YORK 5. N. Y. Digby 4-4141 HOTEL WALDORFASTORIA PLata 9-6860 After both averages reached n,ew high territory for the move at 217.13 for the industrials and 57.58 ';for the railS, weakness in the tele- vision group created uncertainty in the general list and the averages re- acted to lows of 214.14 and 55.75. Considering the sharp decline in some of the television stocks, the comparably moderate decline in the averages attests to the underlying strength of the market. The weakness in the television issues was to be expected. After advancing since early January, the pace of the advance increased sharply in the past five or six weeks,'accompanied by heavy volume. Sharp gyrations in price built up fairly substantial distributional tops in a comparatively short period of time. At the week's lows, most of the individual issues were near the downside objectives indicated by the distributional tops. However, conSiderable consolidation may be needed until the next move is indicated. The action of the general market has, in the main been quite differ- ,ent from that of the television group. The fifty-seven point advance from' 'the June, 1949 lows has been quite orderly and the leadership has been good. The better grade issues have led the advance. Every advance has been follow-' ed by a consolidation before the uptrend has been resumed. As a result, our intermediate and longer term gauges have never registered an overbought condition. Until the general market follows the recent action of the tele- vision group, with volume of climactic proportions and inferior leadership, we see no indication of' other than the normal technical corrections. It would appear that the general market has not even started the explosive phase of the advance. I continue to expect a minimum of 225 in the indus- trial average and a maximum of 250-260 before a full fledged intermediate correction occurs, and continue to advise the purchase of recommended issues during periods of irregularity. Some groups of stocks have partiCipated in the advance to only a very small extent and are actually selling at the same price level as they were when the industrial average was in the 170-180 range. One such group is the retail store stocks. Individual issues have fluctuated in narrow trading ranges Since early 1948 when most issues made their lows. As a result, these stocks have built up substantial potential base patterns. If these areas are penetrated upside, some of these issues would indicate a 'return to close to the 1946 highs which are considerably above present L '.. levels. A list of some of these issues is compilea below, together with the trading range in which these stocks have held for more than two years and the possible price objective if the area is penetrated upside. May Depart- ment Stores, which we originally recommended at 40, is the only issue which has broken out of the range. Approx. Approx. 1949 Price Div. 1946 High Trading Range POSSible Indication Allied Stores Assoc.Dry Goods Best & CompanY City Stores Interstate Dept. May Dept. Stores Mercantile Stores National Dept.Stores 34 16 26 17 22 49 15 15 3.00 1.60 2.00 1.20 2.00 3.00 1.00 1.50 63 3/8 36 1/4 52 1/2 38 1/4 50 70 35 39 25 37 12 19 24 30 13 – 21 18 – 26 36 48 13 – 18 14 22 50 55 29 33 48 35 – 40 36 70 25 32 (' May 5, 1950 EDMUND W. TABELL WALSTON, HOFFMAN & GOODWIN – ,7If,0–',\ \ /Co This memorandum is not to be construed illS an offer or solicitation of offen; to buy or sell any seturities. From time to time IWahton, Hoffmlln & Goodwin may have an interest in some or 1111 of the securitilt. mentioned herein, The foregoing material has been prepared by, us as matt,er of infCrmation only It 11. based upon information believed reliable but not necessarily complete, II not guaranteed as accurate or final, and IS not Intended to foreclose Independent Inquiry. … r..' .- . ……. ,.ij