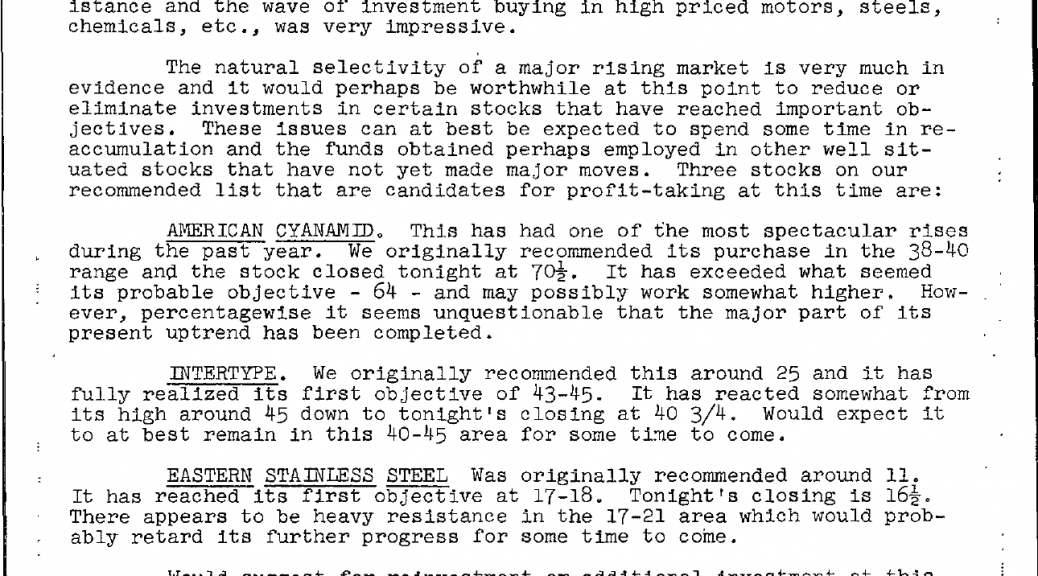 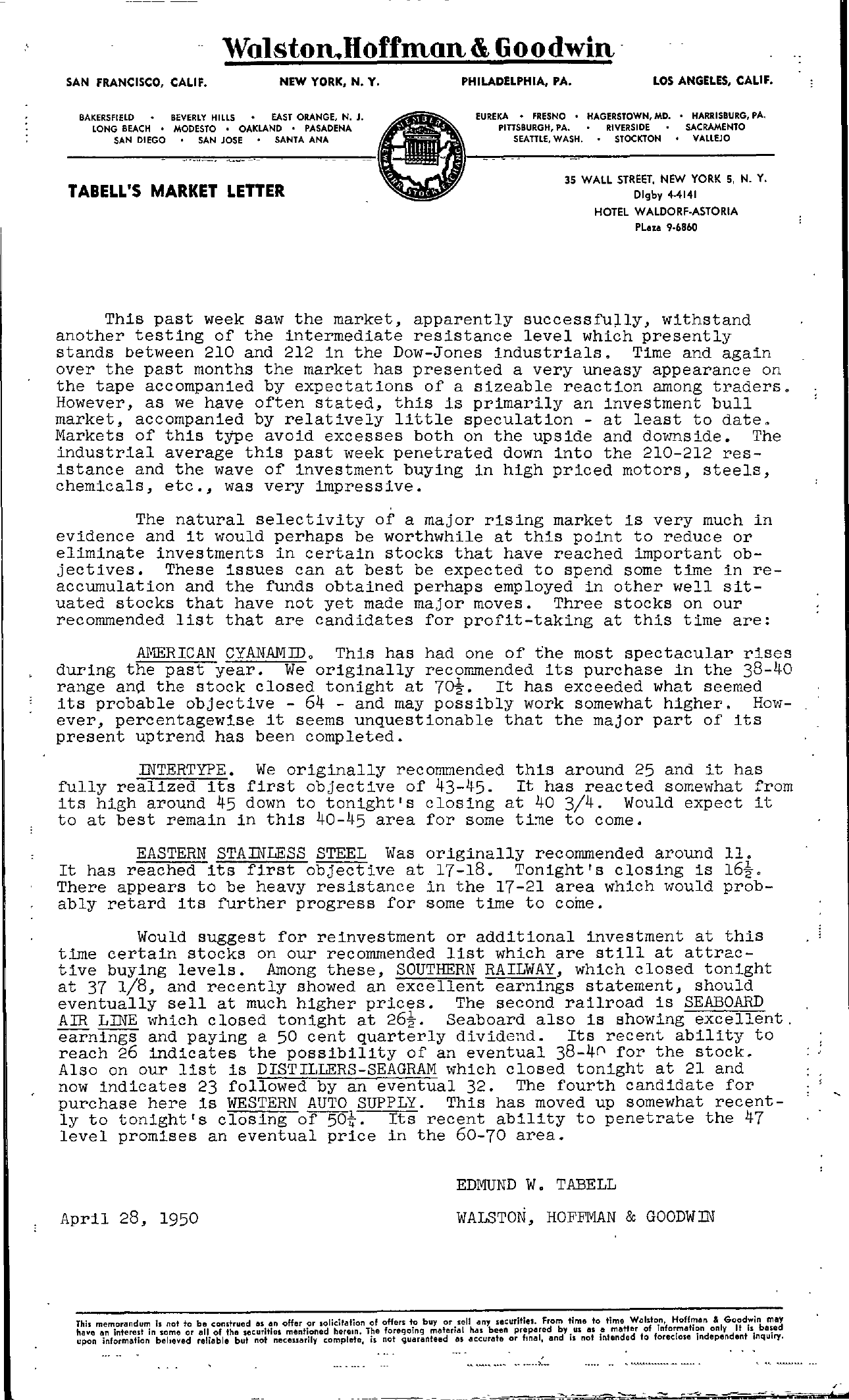 Walston-Hoffman &, Goodwin SAN FRANCISCO, CALIF. NEW YORK, N. Y. PHILADELPHIA, PA. LOS ANGELES, CALIF. BAKERSFIELD BEVERLY HILLS EAST ORANGE, N. J. LONG BEACH MODESTO OAKLAND PASADENA SAN 01 EGO SAN JOSE SANTA ANA EUREKA FRESNO HAGERSTOWN, MD. HARRISBURG, PA. PITTSBURGH, PA. RIVERSIDE SACRAMENTO SEATTLE, WASH. STOCKTON VAllEJO TABELL'S MARKET LEnER 35 WALL STREET. NEW YORK 5, N. Y. Digby 0\-4141 HOTEL WALDORFASTORIA PLata 96860 This past week saw the market, apparently successfuly, withstand another testing of the intermediate resistance level which presently stands between 210 and 212 in the Dow-Jones industrials. Time and again over the past months the market has presented a very uneasy appearance on the tape accompanied by expectations of a sizeable reaction among traders. However, as we have often stated, this is primarily an investment bull market, accompanied by relatively little speculation – at least to date. Markets of this tyPe avoid excesses both on the upside and downside. The industrial average this past week penetrated down into the 210-212 res- istance and the wave of investment buying in high priced motors, steels, chemicals, etc., was very impressive. The natural selectivity of a major rising market is very much in evidence and it would perhaps be worthwhile at this point to reduce or eliminate investments in certain stocks that have reached important objectives. These issues can at best be expected to spend some time in reaccumulation and the funds obtained perhaps employed in other I'lell situated stocks that have not yet made major moves. Three stocks on our recommended list that are candidates for profit-taking at this time are AffiRICAN CYANAMID. This has had one of the most spectacular rises during the past year. We originally recommended its purchase in the 38-40 range and the stock closed tonight at 70. It has exceeded what seemed its probable objective – 64 – and may possibly work somewhat higher. However, percentagewise it seems unquestionable that the major part of its present uptrend has been completed. INTERTYPE. We originally recommended this around 25 and it has fully realized its first objective of 43-45. It has reacted somewhat from its high around 45 down to tonight's closing at 40 3/4. Would expect it to at best remain in this 40-45 area for some tie to come. EASTERN STAINLESS STEEL Was originally recommended around II. It has reached its first objective at 17-18. Tonight's closing is 16. There appears to be heavy resistance in the 17-21 area which would prob- ably retard its further progress for some time to come. Would suggest for reinvestment or additional investment at this time certain stocks on our recommended list which are still at attractive buying levels. Among these, SOUTHERN RAILWAY, which closed tonight at 37 1/8, and recently showed an excellent earnings statement, should eventually sell at much higher prices. The second railroad is SEABOARD AIR LINE which closed tonight at 26. Seaboard also is showing excellent. earnings and paying a 50 cent quarterly dividend. Its recent ability to reach 26 indicates the possibility of an eventual 38-40 for the stock. Also on our list is DISTILLERS-SEAGRAM which closed tonight at 21 and now indicates 23 followed by an eventual 32. The fourth candidate for purchase here is WESTERN AUTO SUPPLY. This has moved up somewhat recent- ly to tonight's clOSing of 50t. Its recent ability to penetrate the 47 level promises an eventual price in the 60-70 area. April 28, 1950 EDMUND W. TABELL WALSTON, HOFFMAN & GOODWIN This memorandum Is not hayo an interest in some to or be all condrued as an of the securities offer or solicitation mentioned herein. of The offers to buy or sell any seurltte1. From time to foregoing material has been prepared by. us al a timmaetteWr lioisftolnn,foHromfaff'Yl'ann o&nlyGooIdt IS.inbameady upon informa.tion beileyed reliable but not necellarily complete, is not guaranteed as accurate or final, and IS not Intended to foreciol mdependent Inquiry. ,. .,,,-' d