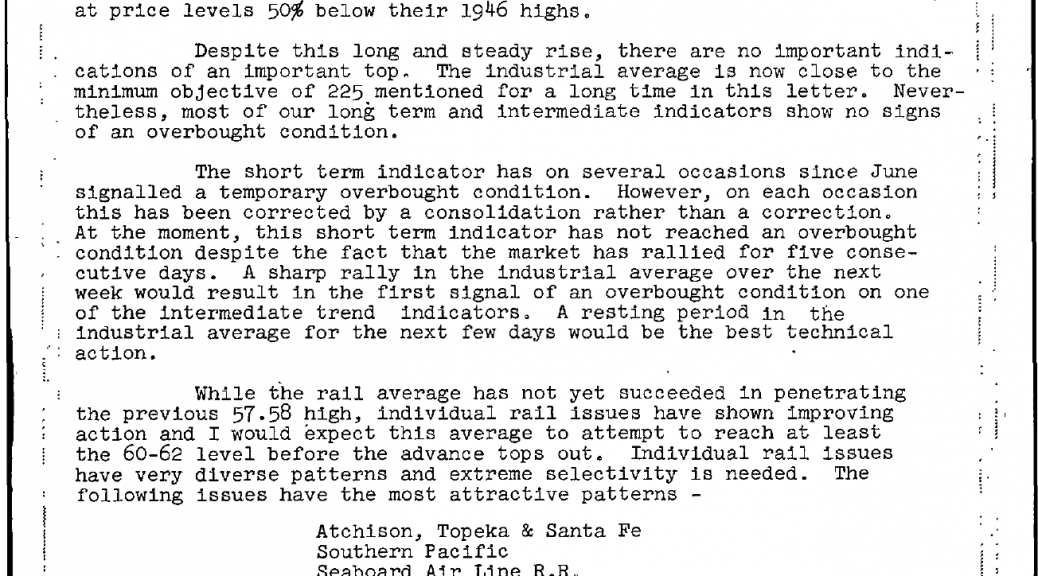 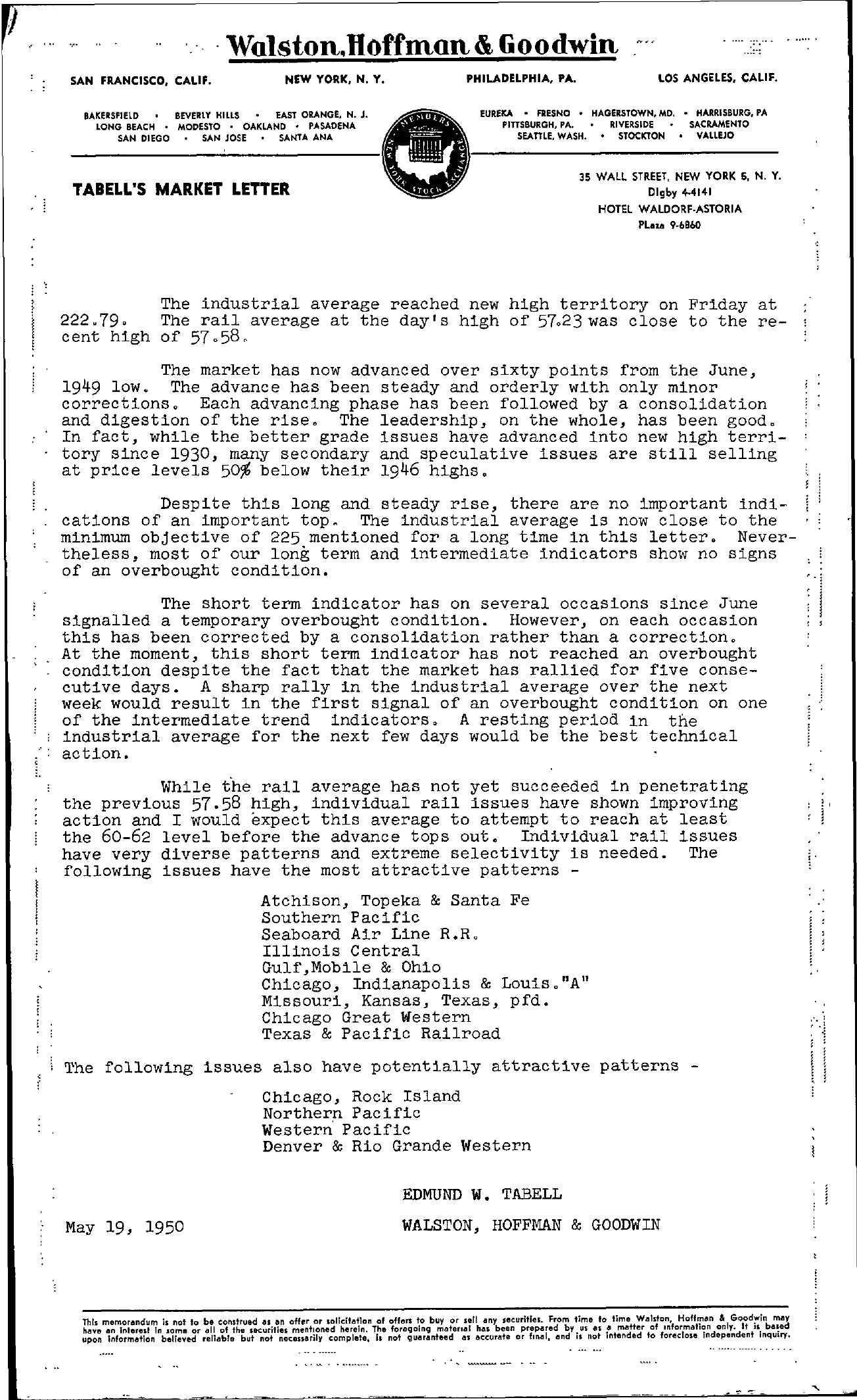 Walston.Hoffman (\ Goodwin SAN FRANCISCO. CALIF. NEW YORK. N. Y. PHILADELPHIA. PA. LOS ANGELES. CALIF. BAKERSfiELD BEVERLY HILLS EAST ORANGE, N. J. LONG BEACH MODESTO OAKLAND PASADENA SAN DIEGO SAN JOSE SANTA ANA EUREKA FRESNO HAGERSTOWN, MD. HARRISBURG, PA PITTSBURGH, PA. RIVERSIDE SACRAMENTO SEATTLE, WASH. STOCKTON VALLEJO TABELL'S MARKET LETTER 35 WALL STREET. NEW YORK 5. N. Y. Digby 4-4141 HOTEL WALDORFASTORIA PLaxa 96B60 The industrial average reached new high territory on Friday at 222.79, The rail average at the day's high of 57.23 was close to the recent high of 57.58. The market has now advanced over sixty pOints from the June, 1949 low. The advance has been steady and orderly with only minor corrections. Each advancing phase has been followed by a consolidation and digestion of the rise. The leadership, on the whole, has been good. In fact, while the better grade issues have advanced into new high terri- tory Since 1930, many secondary and speculative issues are still selling at price levelS 50 below their 1946 highs. Despite this long and steady rise, there are no important indications of an important top. The industrial average is now close to the minimum objective of 225 mentioned for a long time in this letter. Never- theless, most of our long term and intermediate indicators show no Signs of an overbought condition. The short term indicator has on several occasions since June Signalled a temporary overbought condition. However, on each occaSion this has been corrected by a consolidation rather than a correction. At the moment, this short term indicator has not reached an overbought condition despite the fact that the market has rallied for five consecutive days. A sharp rally in the industrial average over the next week would result in the first signal of an overbought condition on one of the intermediate trend indicators. A resting period in the industrial average for the next few days would be the best technical ,.', action. While the rail average has not yet succeeded in penetrating the previous 57.58 high, individual rail issues have shown improving action and I would expect this average to attempt to reach at least the 60-62 level before the advance tops out. Individual rail issues have very diverse patterns and extreme selectivity is needed. The following issues have the most attractive patterns Atchison, Topeka & Santa Fe Southern Pacific Seaboard Air Line R.R. Illinois Central Gulf,Mobile & Ohio Chicago, Indianapolis & Louis.nAn Missouri, Kansas, Texas, pfd. Chicago Great Western Texas & PacifiC Railroad The following issues also have potentially attractive patterns – !, 1 . ,,'.. '1 Chicago, Rock Island Northern Pacific western' PacifiC Denver & Rio Grande Western May 19, 1950 EDMUND W. TABELL WALSTON, HOFFMAN & GOODWIN ThIs memorandum Is not IIl1ve an Interest In Jome to or be all construed as an offer or sollcitl!tlon of of the securities mentioned herein. The offen to buy or sell any securities. From time to time Walston, Hoffman foregoing matenel has been prepared by, us as a matter of Information o&nlyG.ooItdISi,nbam.!l upon Information believed reliable but not necessarily complete, 15 not guaranteed as accurate or fInal, and II not Intended to forecl05e Independent Inquiry.