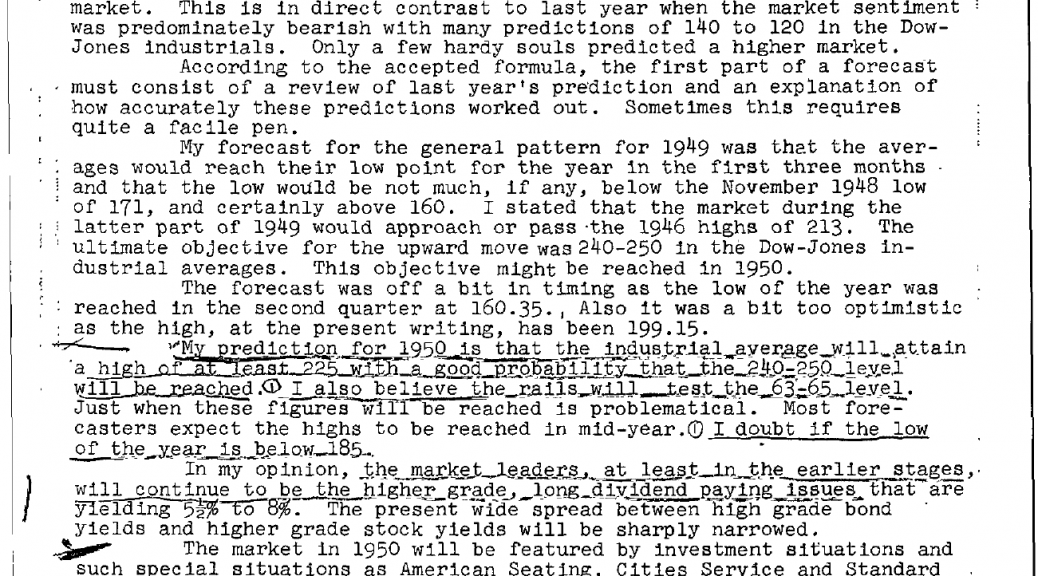 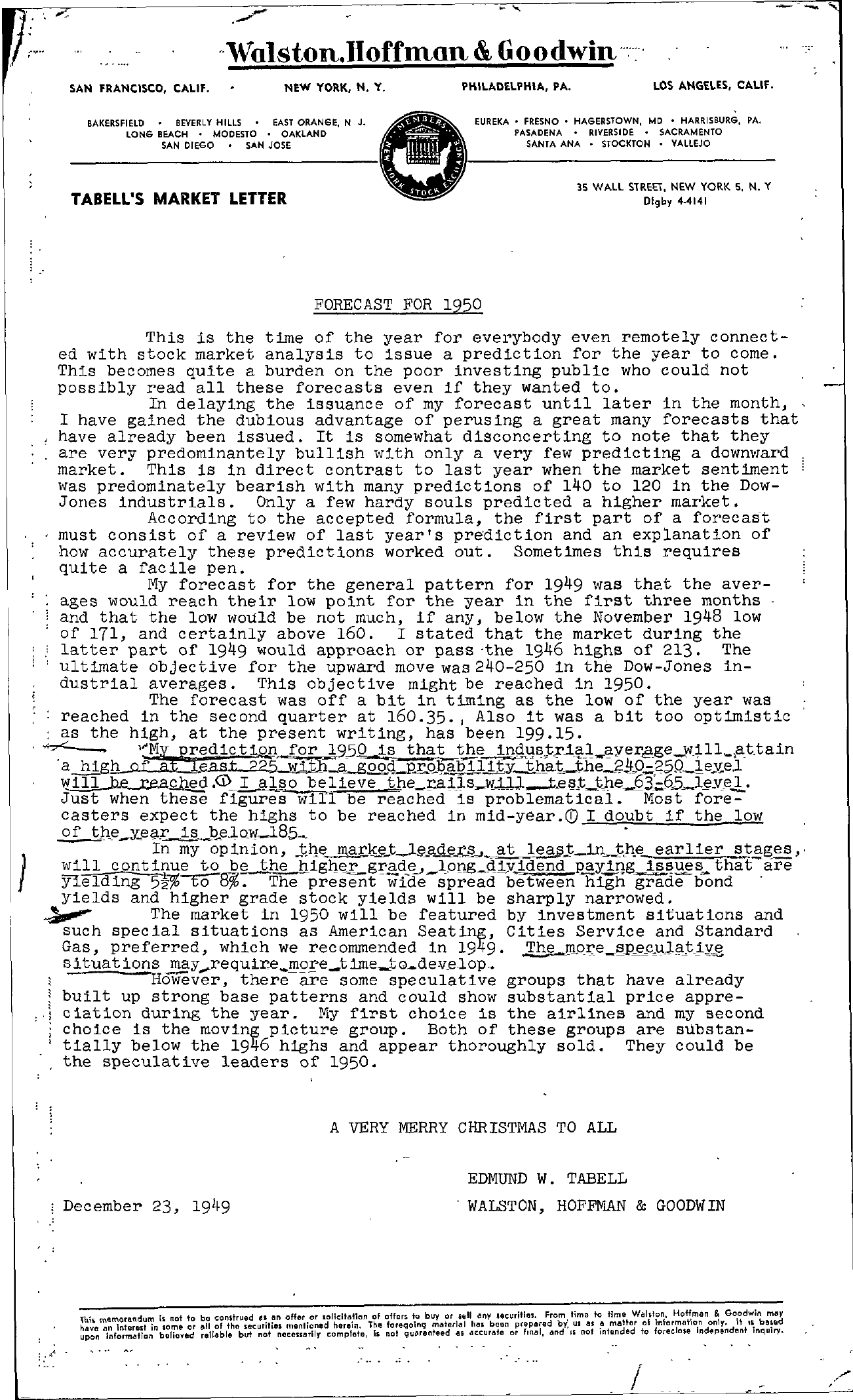 TABELL'S MARKET LETTER lS WALL SlREEr, NEW YORK S, N. Y DIgby 4-4141 FORECAST FOR 1950 This is the time of the year for everybody even remotely connect- ed with stock market analysis to issue a prediction for the year to come. This becomes quite a burden on the poor investing public who could not possibly rrenaddealalyl inthgesthee forecasts issuance even if they wanted to. of my forecast until later in the month, I have gained the dubious advantage of perusing a great many forecasts that have already been issued. It is somewhat disconcerting to note that they are very predominantely bullish with only a very few predicting a dowmlard market. This is in direct contrast to last year when the market sentiment was predominately bearish with many predictions of 140 to 120 in the Dow- Jones industrials. Only a few hardy souls predicted a higher market. According to the accepted formula, the first part of a forecast must consist of a review of last year's pre'diction and an explanation of how accurately these predictions worked out. Sometimes this requires quite a facile pen. My forecast for the general pattern for 1949 was thet the aver- ages would reach their low point for the year in the first three months and that the low would be not much, if any, below the November 1948 low of 171, and certainly above 160. I stated that the market during the latter part of 1949 would approach or pass the 1946 highs of 213. The ultimate objective for the upward move was 240-250 in the Dow-Jones in- dustrial averages. This objective might be reached in 1950. The forecast was off a bit in timing as the low of the year was reached in the second quarter at 160.35. I Also it was a bit too optimistic as the high, at the present writing, has been 199.15. ' / . ML5;edic t iO,l\j.r 1950 is that llie illtsJ;.r.l;iayer,.a.gewill,at.tain .a high 0 f 3eaB.L225 wltha–';QQ.cLp..l.Q..1ab il ityj;Jtat-the.J;'lLO..;25LJ,e)l.el 1tl1Lll.e….le.a..9J1EW.D I also be lieve ther'.aiJ.sW'DJ.–teflJthe3;;'6lili!yel… Just when these figures wirl be reached is problematical. Most fore- casters expect the highs to be reached in mid-year. I doubt if the low of theebe.low185.., . In my opinion, tlemark..tJsLadeLil at leasJ;inJJl,e earlier l!!g; ) will continue to be the higheg,longivdend Py1ng issthat are Yielding 5-ro-8. The present wide spread between high grade bond . yields and higher grade stock yields will be sharply narrowed. la .. The market in 1950 will be featured by investment situations and such special situations as American Seating, Cities Service and Standard Gas, preferred, which we recommended in 1949. lhoepu situations maY,requiI'emoretimetodeve.lop,. —nowever, there-are some speculative groups that have already built up strong base patterns and could show substantial price appre,,!i eiation during the year. My first choice is the airlines and my second choice is the moving picture group. Both of these groups are sUbstan- tially below the 1946 highs and appear thoroughly sold. They could be the speculative leaders of 1950. December 23, 1949 A VERY MERRY CHRISTMAS TO ALL EDMUND W. TABELL WALSTON, HOFFMAN & GOODWIN \. hae amorafldum rn Interost in is lo not me to Of be ,II conltrued !15 an of the securities offer or lollcltation mentioned herein. of The offers to buy or sell MY securitiOS. From foregoing material h!ls been prepo!Ired by tuims e!ISto time matt DWf aoltstoinnf,orHmoaftflmonanon&ly.GoIotdw1,inbameayd upon information believed reliable br.rt not neeeuarily complete, Is not gUi!ranfeed as accurate or final, and IS not Intended to foretlose Independent InquirY I ,/