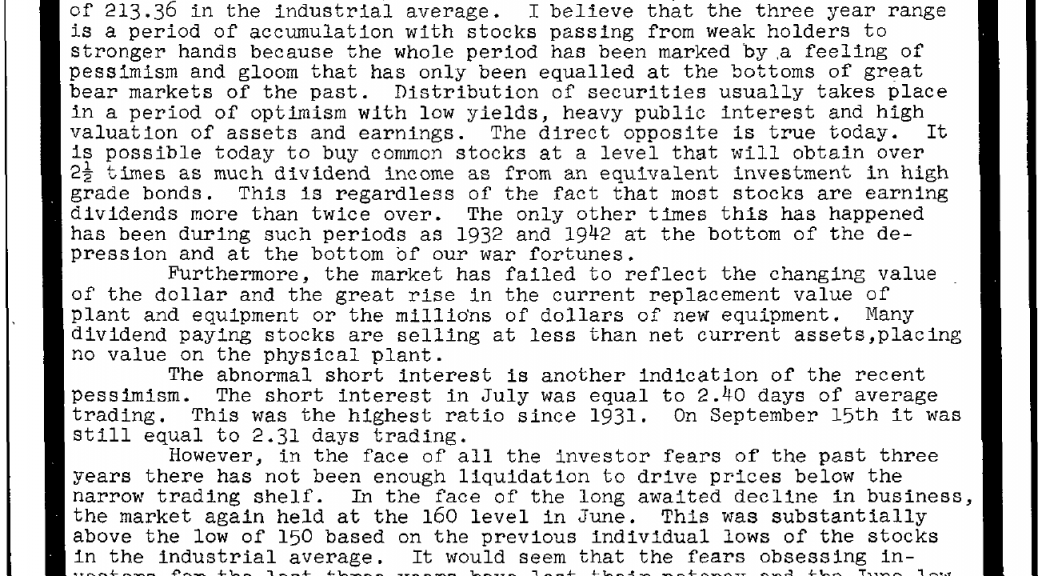 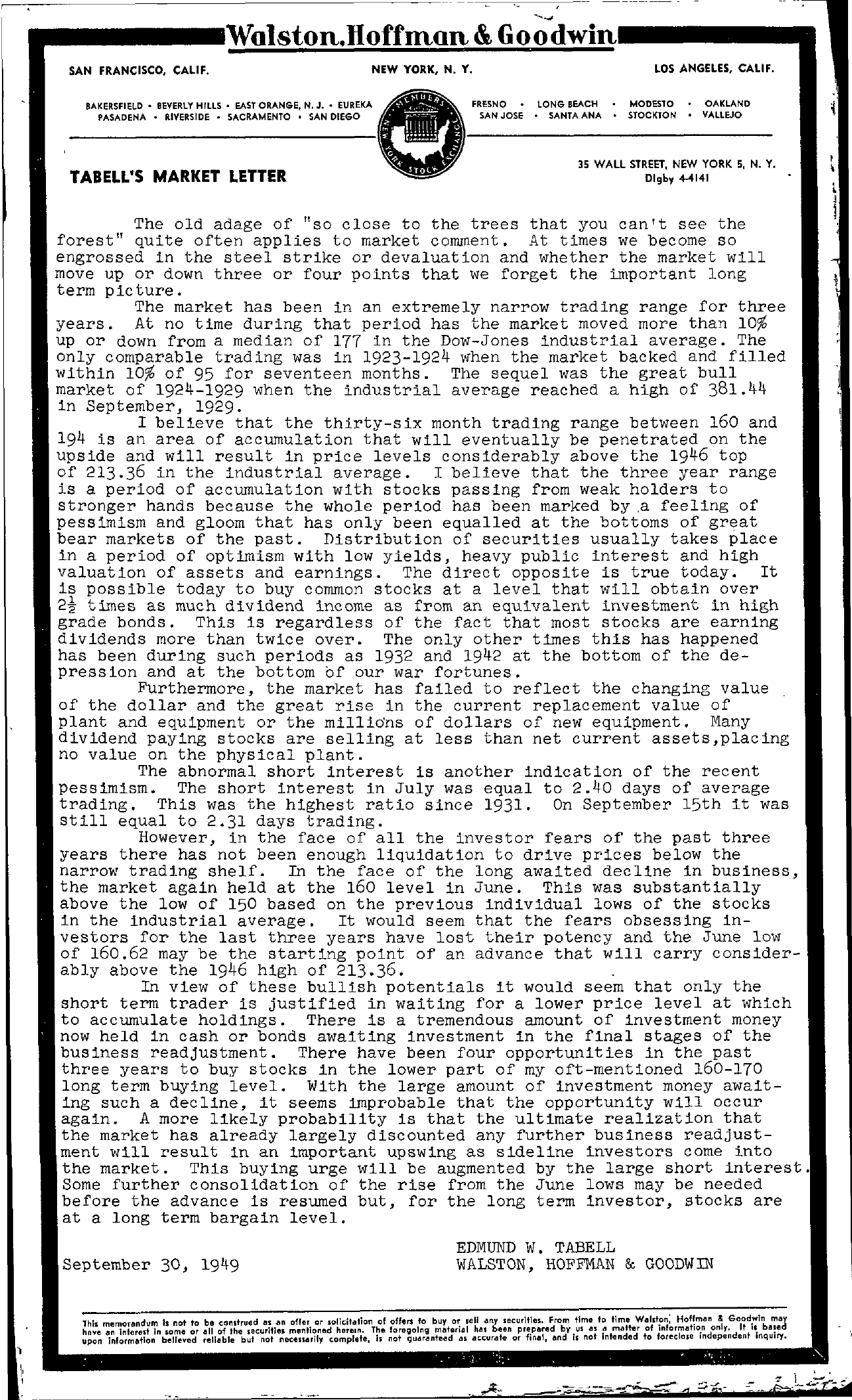 TABELL'S MARKET LETTER 35 WALL STREET, NEW YORK 5, N, y, Digby 4141 The old adage of so close to the trees that you can't see the forest quite often applies to market conunent. At times we become so engrossed in the steel strike or devaluation and Whether the market will move up or down three or four pOints that we forget the important long term picture. The market has been in an extremely narrow trading range for three years. At no time during that period has the market moved more than 10 up or down from a median of 177 in the Dow-Jones industrial average. The only comparable trading was in 1923-1924 when the market backed and filled within 10 of 95 for seventeen months. The sequel was the great bull market of 1924-1929 when the industrial average reached a high of 381.44 in September, 1929. I believe that the thirty-six month trading range between 160 and 194 is an area of accumUlation that will eventually be penetrated on the upside and will result in price levels considerably above the 1946 top of 213.36 in the industrial average. I believe that the three year range is a period of accumulation with stocks passing from weak holders to stronger hands because the whole period has been marked by ,a feeling of pessimism and gloom that has only been equalled at the bottoms of great bear markets of the past. Distribution of securities usually takes place in a period of optimism with low yields, heavy public interest and high valuation of assets and earnings. The direct opposite is true today. It is possible today to buy conunon stocks at a level that will obtain over 2t times as much dividend income as from an equivalent investment in high grade bonds. This is regardless of the fact that most stocks are earning dividends more than twice over. The only other times this has happened has been during such periods as 1932 and 1942 at the bottom of the depression and at the bottom of our war fortunes. Furthermore, the market has failed to reflect the changing value of the dollar and the great rise in the current replacement value of plant and equipment or the millio'ns of dollars of new equipment. Many dividend paying stocks are selling at less than net current assets,placing no value on the physical plant. The abnormal short interest is another indication of the recent pessimism. The short interest in July was equal to 2.40 days of average trading. This was the highest ratio since 1931. On September 15th it was still equal to 2.31 days trading. However, in the face of all the investor fears of the past three years there has not been enough liquidation to drive prices below the narrow trading shelf. In the face of the long awaited decline in business, the market again held at the 160 level in June. This was substantially above the low of 150 based on the previous individual lows of the stocks in the industrial average. It would seem that the fears obsessing in- vestors for the last three years have lost their potency and the June low of 160.62 may be the starting point of an advance that will carry consider- ably above the 1946 high of 213.36. In view of these bullish potentials it would seem that only the short term trader is justified in waiting for a lower price level at which to accumulate holdings. There is a tremendous amount of investment money now held in cash or bonds awaiting investment in the final stages of the business readjustment. There have been four opportunities in the past three years to buy stocks in the lower part of my oft-mentioned 160-170 long term buying level. With the large amount of investment money awaiting such a decline, it seems improbable that the opportunity will occur again. A more likely probability is that the ultimate realization that the market has already largely discounted any further business readjustment will result in an important upswing as sideline investors come into the market. This buying urge will be augmented by the large short interest Some further consolidation of the rise from the June lows may be needed before the advance is resumed but, for the long term investor, stocks are at a long term bargain level. September 30, 1949 EDMUND W. TABELL WALSTON, HOFFMAN & GOODWIN ( 1 This memorandum Is not to be construed liS an offer or solicitation of offers to buy or iell any securities. From time to time Waldon Hof!men & Goodwin may hove u infeferll some or all of the securltles mentioned horeln. The for0901ng material hlls been prepared by us as a matter of Information only, It is baled upon Information belJeved reliable but not ncceuarily complete, is not guaranteed a5 accurate or fina', and is not intended to forecloe independent Inquiry. )