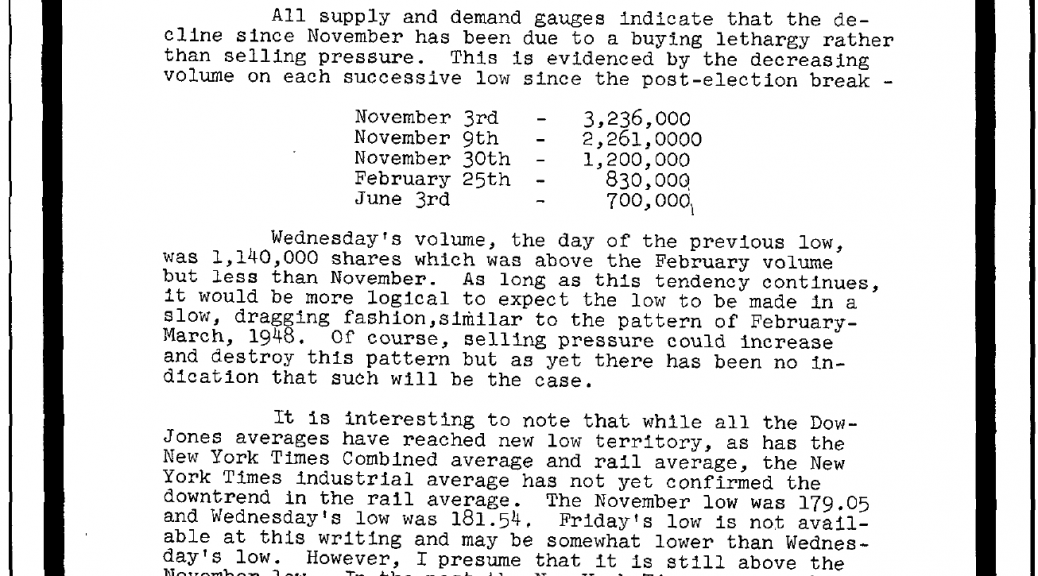 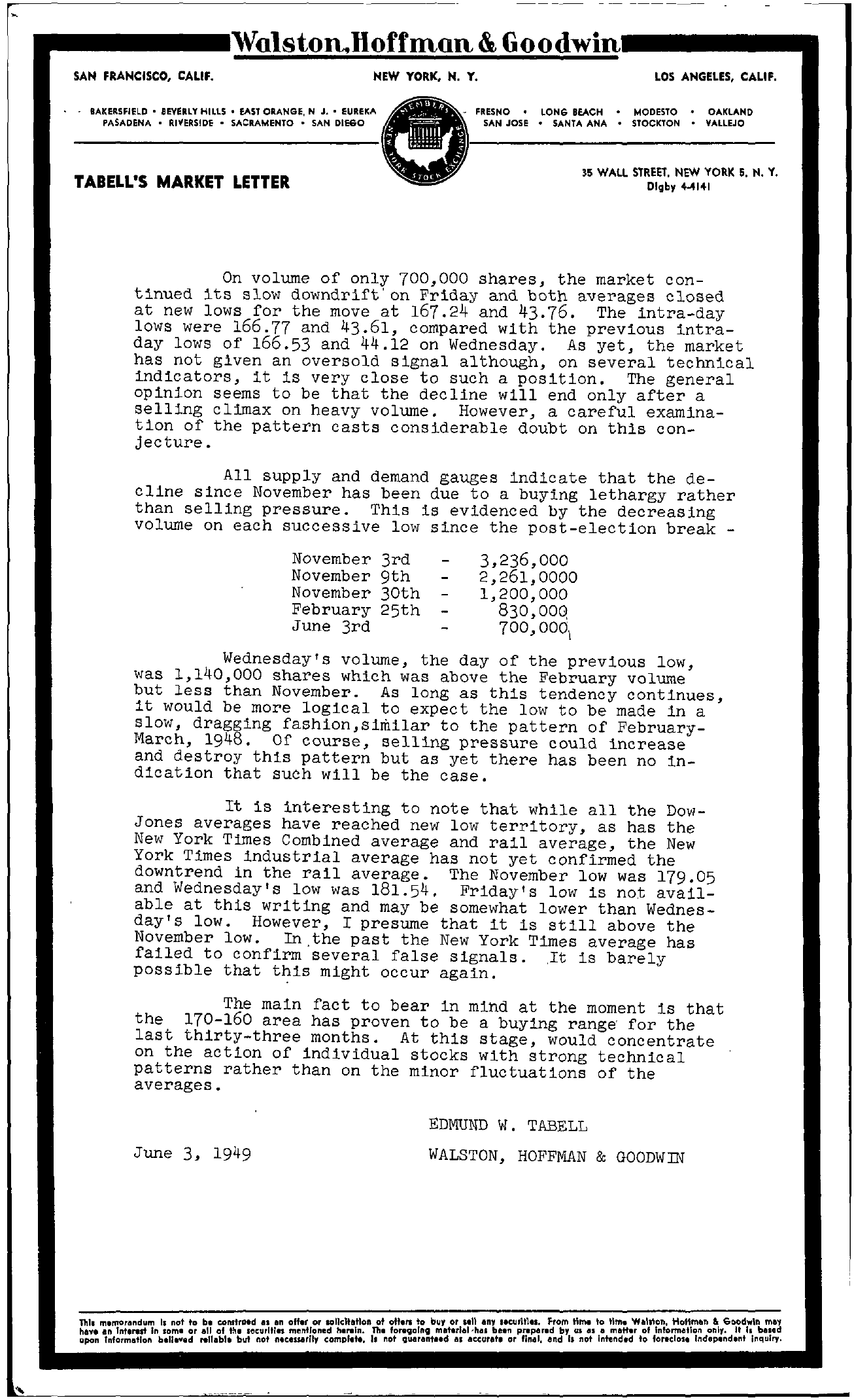 TABELL'S MARKET LETTER 35 WALL STREET. NEW YORK 5. N. Y. Digby 4-1141 On volume of only 700,000 shares, the market continued its slow downdrift'on Friday and both averages closed at new lows for the move at 167.24 and 43.76. The intra-day lows were 166.77 and 43.61, compared with the previous intra- day lows of 166.53 and 44.12 on Wednesday. As yet, the market has not given an oversold signal although, on several technical indicators, it is very close to such a pOSition. The general opinion seems to be that the decline will end only after a selling climax on heavy volume. However, a careful examination of the pattern casts considerable doubt on this conjecture. All supply and demand gauges indicate that the decline since November has been due to a buying lethargy rather than selling pressure. This is evidenced by the decreasing volume on each successive low since the post-election break November 3rd November 9th November 30th February 25th June 3rd 3,236,000 2,261,0000 1,200,000 830,000 7 00 ,00\ Wednesday's volume, the day of the previous low, was 1,140,000 shares which was above the February volume but less than November. As long as this tendency continues, it would be more logical to expect the low to be made in a slow, dragging fashion,similar to the pattern of FebruaryMarch, 1948. Of course, selling pressure could increase and destroy this pattern but as yet there has been no indication that such will be the case. It is interesting to note that while all the DowJones averages have reached new low territory, as has the New York Times Combined average and rail average, the New York Times industrial average has not yet confirmed the downtrend in the rail average. The November low was 179.05 and Wednesday's low was 181.54. Friday's low is not avail- able at this writing and may be somewhat lower than Wednesday's low. However, I presume that it is still above the November low. In ,the past the New York Times average has failed to confirm several false signals. ,It is barely possible that this might occur again. The main fact to bear in mind at the moment is that the 170-160 area has proven to be a buying range' for the last thirty-three months. At this stage, would concentrate on the action of individual stocks with strong technical patterns rather than on the minor fluctuations of the averages. June 3, 1949 EDMUND W. TABELL WALSTON, HOFFMAN & GOODWIN Thl hIIOI 'InmfoIonrrmta,,na..tdsiu1omnInbI1..n0nm.o.,'t.dotor ,a.b.lnl, eocbf.ol.nthtbt,rlflsttedcnu.or.t.itienenescoemsfsfeeanrrtiIlooyrnecsdoomlhIc.p.itt.a..tltneio., nITIohf,nooftOffReQn;uoaltnroQanbteumeydatotrarllasleaU-chcauelnraybteeenocrurpifrtiIn.eal.,…andnodbmyIsumsnoaet. to tim. Walnen, Hoffman Goodwin may II matter of Information only. It II baled intended to foreclose Independent Inquiry.