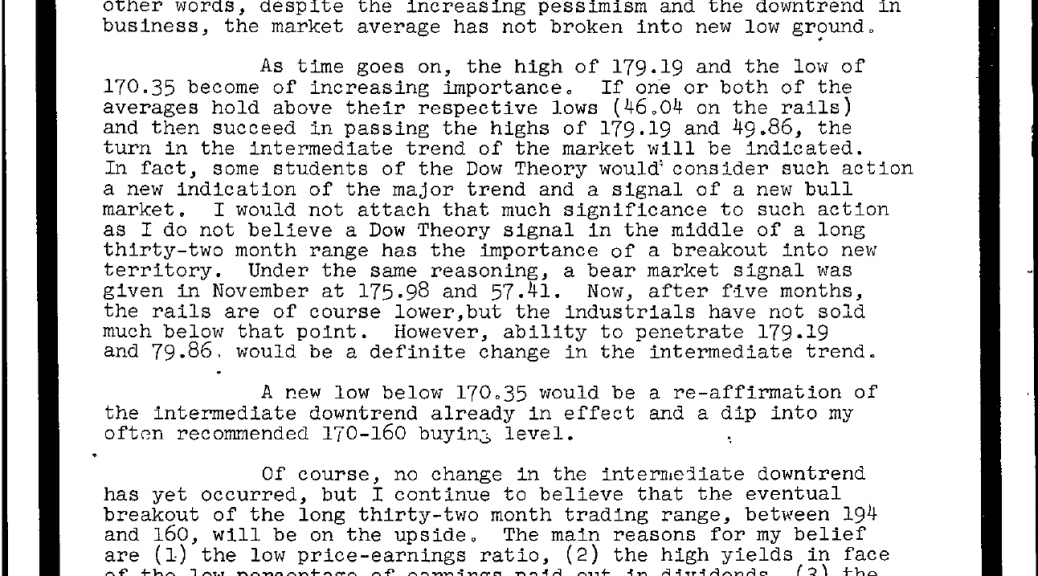 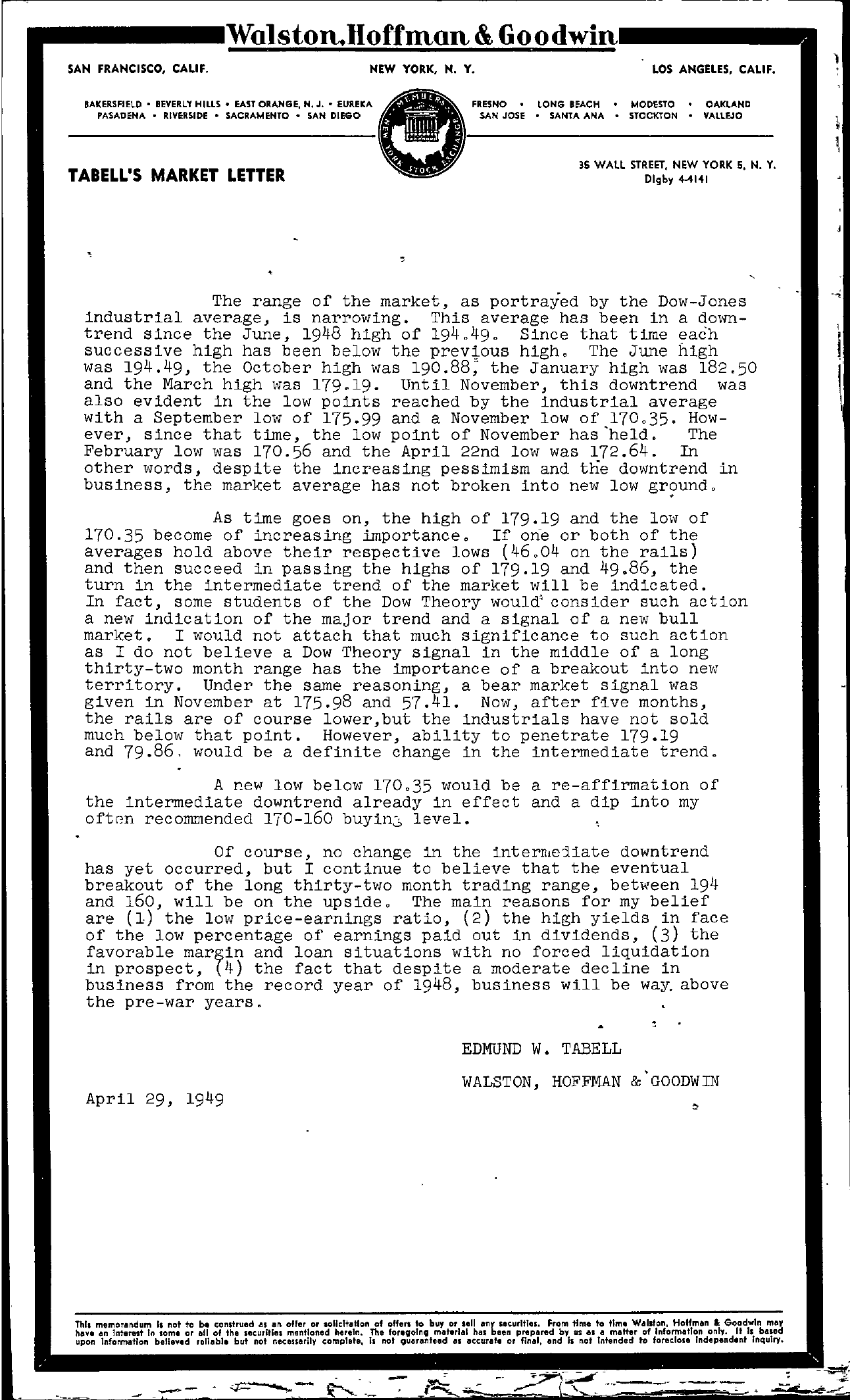 TABEll'S MARKET lETTER 35 WALL STREET. NEW YORK 5. N. Y. Digby 4-4141 ) \ ,, The range of the market, as portrayed by the Dow-Jones industrial average, is narrowing. This average has been in a downtrend since the June, 1948 high of 194,49, Since that time each successive high has been below the prevtous high, The June high was 194.49, the October high was 190.88; the January high was 182.50 and the March high was 179.19. Until November, this downtrend was also evident in the low pOints reached by the industrial average with a September low of 175.99 and a November low of 170,35. However, since that time, the low point of November has 'held. The February low was 170.56 and the April 22nd low was 172.64. In other wordS, despite the increasing pessimism and the downtrend in bUSiness, the market average has not broken into new low grund, As time goes on, the high of 179.19 and the 10\'1 of 170.35 become of increasing importance, If one or both of the averages hold above their respective lows (46,04 on the rails) and then succeed in passing the highs of 179.19 and 49.86, the turn in the intermediate trend of the market will be indicated. In fact, some students of the Dow Theory woul consider such action a new indication of the major trend and a signal of a new bull market, I would not attach that much significance to such action as I do not believe a Dow Theory signal in the middle of a long thirty-two month range has the importance of a breakout into new territory. Under the same reasoning, a bear market signal was given in November at 175.98 and 57.41. NOW, after five months, the rails are of course lower,but the industrials have not sold much below that point. However, ability to penetrate 179.19 and 79.86. would be a definite change in the intermediate trend. A new low below 170,35 would be a re-affirmation of the intermediate downtrend already in effect and a dip into my oftrm recommended 170-160 buyin.; level. Of course, no change in the intern,ejiate downtrend has yet occurred, but I continue to believe that the eventual breakout of the long thirty-two month trading range, between 194 and 160, will be on the upside, The main reasons for my belief are (1) the low price-earnings ratiO, (2) the high yields in face of the low percentage of earnings paid out in dividends, (3) the favorable marin and loan situations with no forced liquidation in prospect, (If) the fact that despite a moderate decline in bUSiness from the record year of 1948, business will be wa above the pre-war years. April 29, 1949 EDMUND W. TABELL WALSTON, HOFFMAN & GOODWIN . I I \ I This memorandum I, not to b. construed .as ar'I offer or lollcTtation of offers to buy or 141111 any securities. From time to time Walston, Hoffman GoodwIn mey have en tnterett In lome or ell of the securities mentioned hereIn. The 10t.;olnG mot.rlal has been prepared by us 1 oil matter of Information only. It Is baled upon Information believed rollllble but not necessarily complete, Is not Querenteed til IIccurate or finel, lind Is not Intended to foredose Independent Inquiry.