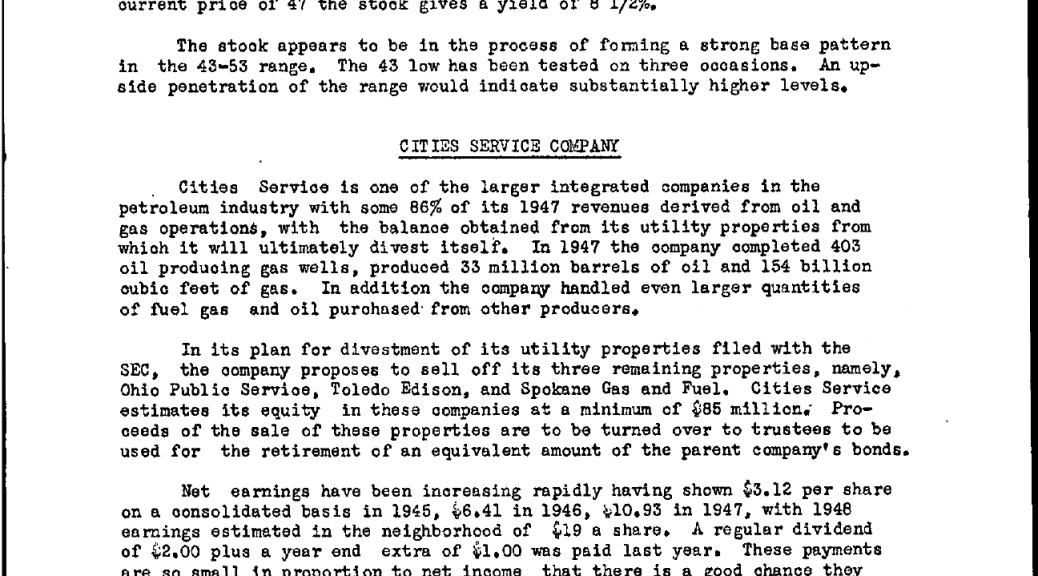 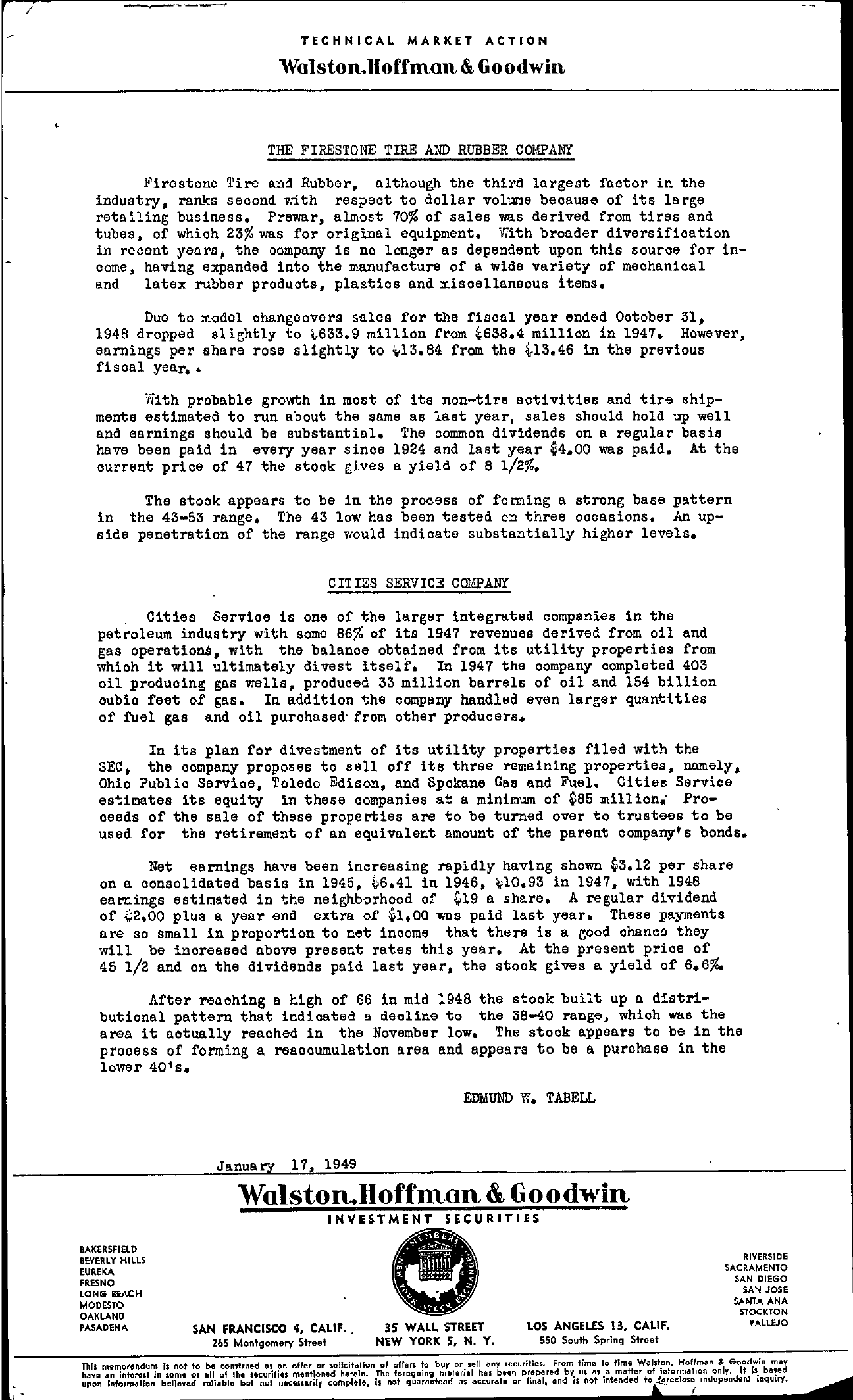 -/ TECHNICAL MARKET ACTION Wolston.Hoffmon &, Goodwin , THE FIRESTONE TIRE AND RUBBER COMPANY Firestone Tire and Rubber, although the third largest factor in the industry, ras second with respect to dollar volume because of its large retailing business. Prewar, almost 70 of sales was derived from tires and tubes, of which 23 was for original equipment. With broader diversification in recent years, the oompa is no longer as dependent upon this source for income, having expanded into the manufacture of a wide variety of meohanical and latex rubber products, plastios and misoellaneous items. Due to model ohangeovers sales for the fiscal year ended October 31, 1948 dropped slightly to 633.9 million from 638.4 million in 1947. However, earnings per share rose slightly to l3.64 from the 13.46 in the previous fiscal year With probable growth in most of its non-tire aotivities and tire shipments estimated to run about the srume as last year, sales should hold up well and earnings should be substantial. The oommon dividends on a regular basis have been paid in every year sinoe 1924 and last year 4,00 was paid. At the ourrent prioe of 47 the stook gives a yield of 8 1/2, The stook appears to be in the process of fonning a strong base pattern in the 43-53 range, The 43 low has been tested on three oocasions. An upside penetration of the range would indioate substantially higher levels, CITIES SERVICE COMPANY , Cities Servioe is one of the larger integrated oompanies in the petroleum industry with some 86 of its 1947 revenues derived from oil and gas operations. with the balanoe obtained from its utility properties from whioh it will ultimately divest itself. In 1947 the oompany oompleted 403 oil produoing gas wells, produoed 33 million barrels of oil and 154 billion oubic feet of gas. In addition the oompa handled even larger quantities of fuel gas and oil purohased' from other producers, In its plan for divestment of its utility properties filed with the SEC, the oompany proposes to sell off its three remaining properties, namely, Ohio Publio Servioe, Toledo Edison, and Spokane Gas and Fuel. Cities Service estimates its equity in these oompanies at a minimum of 85 million. Prooeeds of the sale of these properties are to be turned over to trustees to be used for the retirement of an equivalent amount of the parent compa's bonds. Net earnings have been inoreasing rapidly having shown 3.12 per share on a oonsolidated basis in 1945, 6.4l in 1946, 10.93 in 1947, with 1948 earnings estimated in the neighborhood of 19 a share. A regular dividend of 2.00 plus a year end extra of l.OO was paid last year. These payments are so small in proportion to net inoome that there is a good ohance they will be inoreased above present rates this year. At the present prioe of 45 1/2 and on the dividends paid last year, the stook gives a yield of 6.6 After reaohing a high of 66 in mid 1948 the stook built up a distributional pattern that indioated a decline to the 38-40 range, whioh was the area it aotually reached in the November low. The stook appears to be in the prooess of forming a reaooumulation area and appears to be a purohase in the lower 40's, EIrJIIUND W, TABELL January 17, 1949 Wolston.Hoffmon &. Goodwin INVESTMENT SECURITIES BAKERSFIELD BEVERLY HILLS EUREKA FRESNO LONG BEACH MODESTO OAKLAND PASADENA SAN FRANCISCO 4, CALIF. . 35 WALL STREET 265 Montgomery Street NEW YORK 5, N. Y. LOS ANGELES 13, CALIF. 550 South Spring Street RIVERSIDEi SACRAMENTO SAN DIEGO SAN JOSE SANTA ANA STOCKTON VALLEJO This memorandum is not to be construed (IS 4n offer or solicitation of offen to buy or sell lIny securities. From time to time i'i;;i;'1';'; & Goodwin mav have an ink/rost In some or all of the securities mentioned herein. The foregoin9 material hIlS been prepared by 1,15 tiS a matte., 1 only. It is based upon information belle.,.ed reliable but not necessarily complete, Is not 9uaranteed (15 accurate or final, and is not intended Independent inquiry.