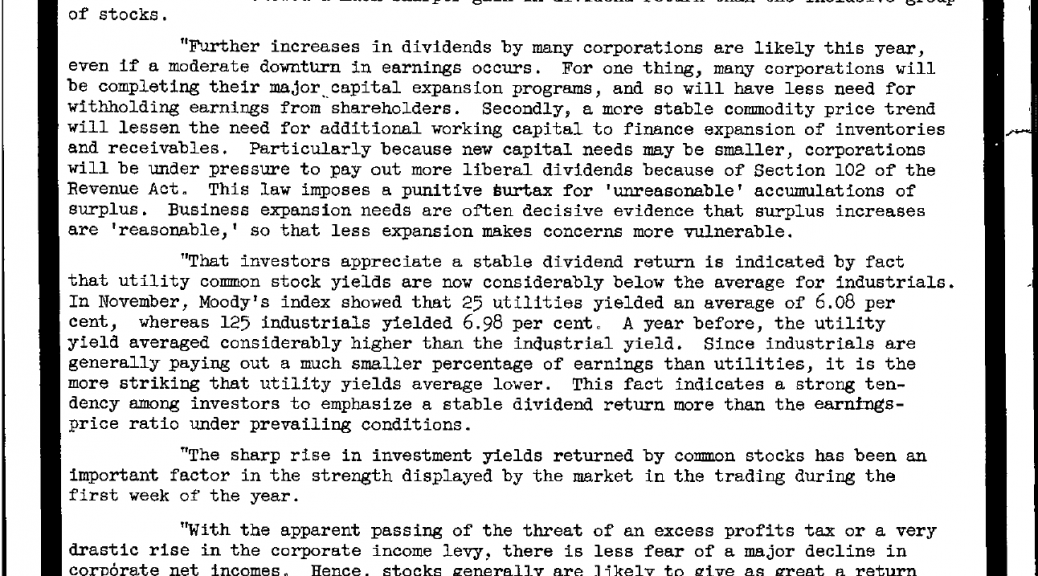 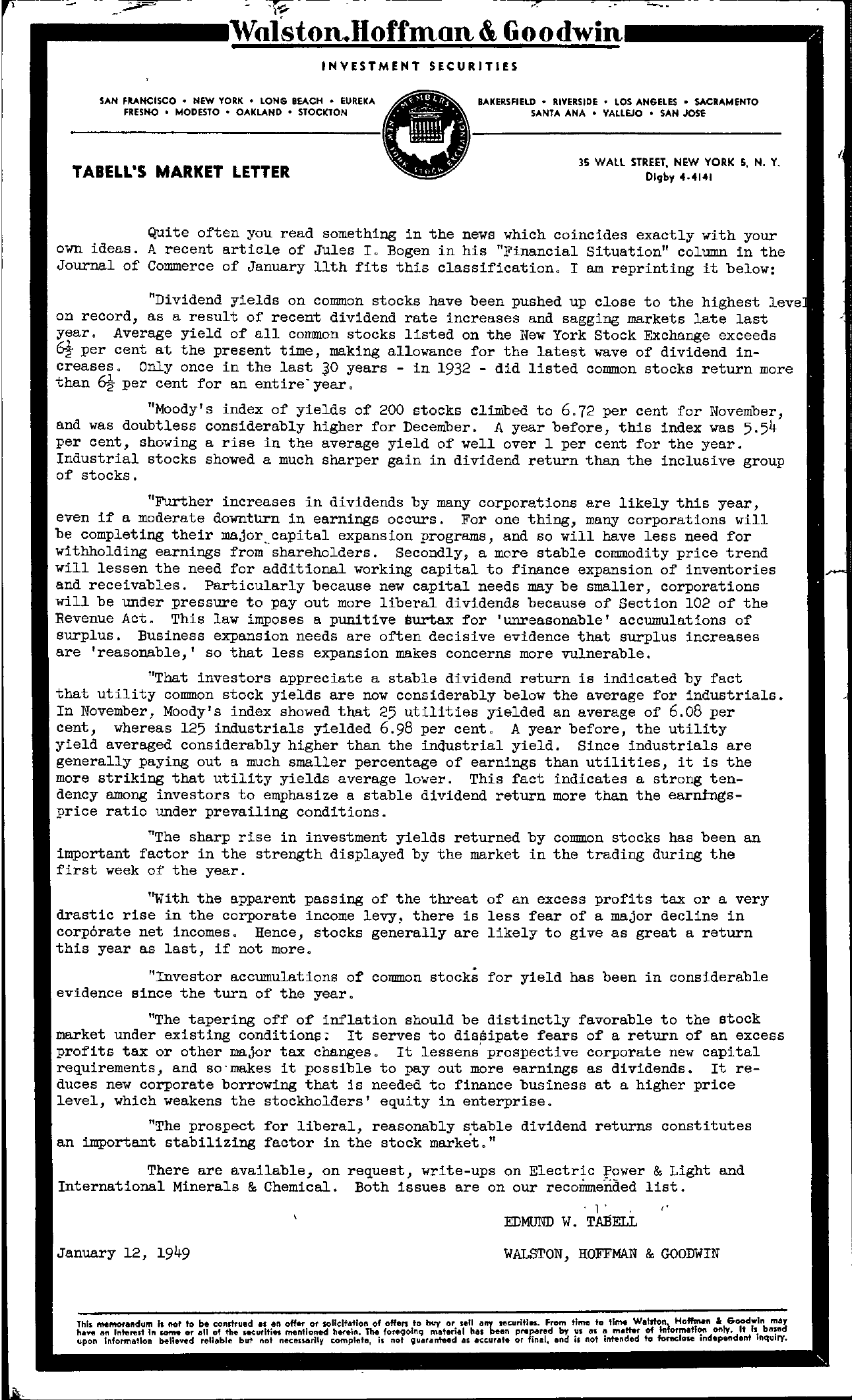 TABELL'S MARKET LETTER 35 WALL STREET. NEW YORK 5, N. Y. Digby 44141 Quite often you read something in the news which coincides exactly with your own ideas. A recent article of Jules I. Bogen in his Financial Situation column in the Journal of Commerce of January 11th fits this classification. I am reprinting it below Dividend yields on Common stocks have been pushed up close to the highest on record, as a result of recent dividend rate increases and sagging markets late last 6tyear. Average yield of all common stocks listed on the New York Stock Exchange exceeds per cent at the present time, making allowance for the latest wave of dividend in- 6tcreases. Only once in the last O years – in 1932 – did listed Common stocks return more than per cent for an entire' year. Moody's index of yields of 200 stocks climbed to 6.72 per cent for November, doubtless considerably higher for December. A year before, this index was 5.54 per cent, showing a rise in the average yield of well over 1 per cent for the year. Industrial stocks showed a much sharper gain in dividend return than the inclusive group stocks. Further increases in dividends by many corporations are likely this year, even if a moderate downturn in earnings occurs. For one thing, many corporations will be completing their major .. capital expansion programs, and so will have less need for withholding earnings from shareholders. Secondly, a more stable commodity price trend will lessen the need for additional working capital to finance expansion of inventories and receivables. Particularly because new capital needs may be smaller, corporations will be under pressure to payout more liberal dividends because of Section 102 of the Revenue Act. This law imposes a punitive surtax for 'unreasonable' accumulations of surplus. Business expansion needs are often decisive evidence that surplus increases are 'reasonable,' so that less expansion makes concerns more vulnerable. That investors appreciate a stable dividend return is indicated by fact that utility common stock yields are now considerably below the average for industrials. In November, Moody's index showed that 25 utilities yielded an average of 6.08 per cent, whereas 125 industrials yielded 6.98 per cent. A year before, the utility yield averaged considerably higher than the industrial yield. Since industrials are generally paying out a much smaller percentage of earnings than utilities, it is the more striking that utility yields average lower. This fact indicates a strong tendency among investors to emphasize a stable dividend return more than the earntngsprice ratio under prevailing conditions. The sharp rise in investment yields returned by Common stocks has been an important factor in the strength displayed by the market in the trading during the first week of the year. With the apparent passing of the threat of an excess profits tax or a very rise in the corporate income levy, there is less fear of a major decline in corporate net incomes. Hence, stocks generally are likely to give as great a return this year as last, if not more. Investor accumulations of common stocks for yield has been in considerable evidence since the turn of the year. The tapering off of inflation should be distinctly favorable to the stock market under existing conditionp; It serves to dissipate fears of a return of an excess profits tax or other major tax changes. It lessens' prospective corporate new capital requirements, and sO'makes it possible to payout more earnings as dividends. It reduces new corporate borrowing that is needed to finance business at a higher price level, which weakens the stockholders' equity in enterprise. The prospect for liberal, reasonably stable dividend returns constitutes an important stabilizing factor in the stock market. There are available, on request, write-ups on Electric ower &Light and International Minerals & Chemical. Both issues are on our recommended list. , l' , /' EDMUND W. TAliELL January 12, 1949 WALSTON, HOFFMAN & GOODWIN 0This IMmorandum h….. an Interest In Is not JOfM to or be all constnJed as an of the SKuritiM or solicitation of mentioned herein. The offen to foregoing buy or sell any curitiu. From material has been prepared by tims ealto timm.ett.Wralomf;lo;faftmlan I Goodjlnb maJ onty. It I lise upon Information believed reliable bitt not necenarily completll, is not Quarllnteed as accUfate or final, and not Intended to foreclose Independent Inquiry.