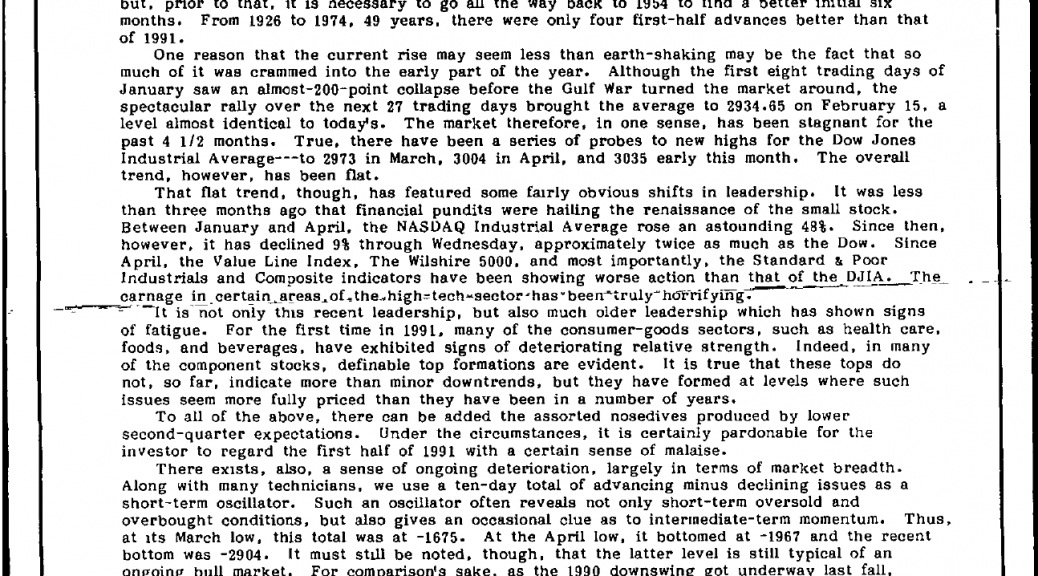 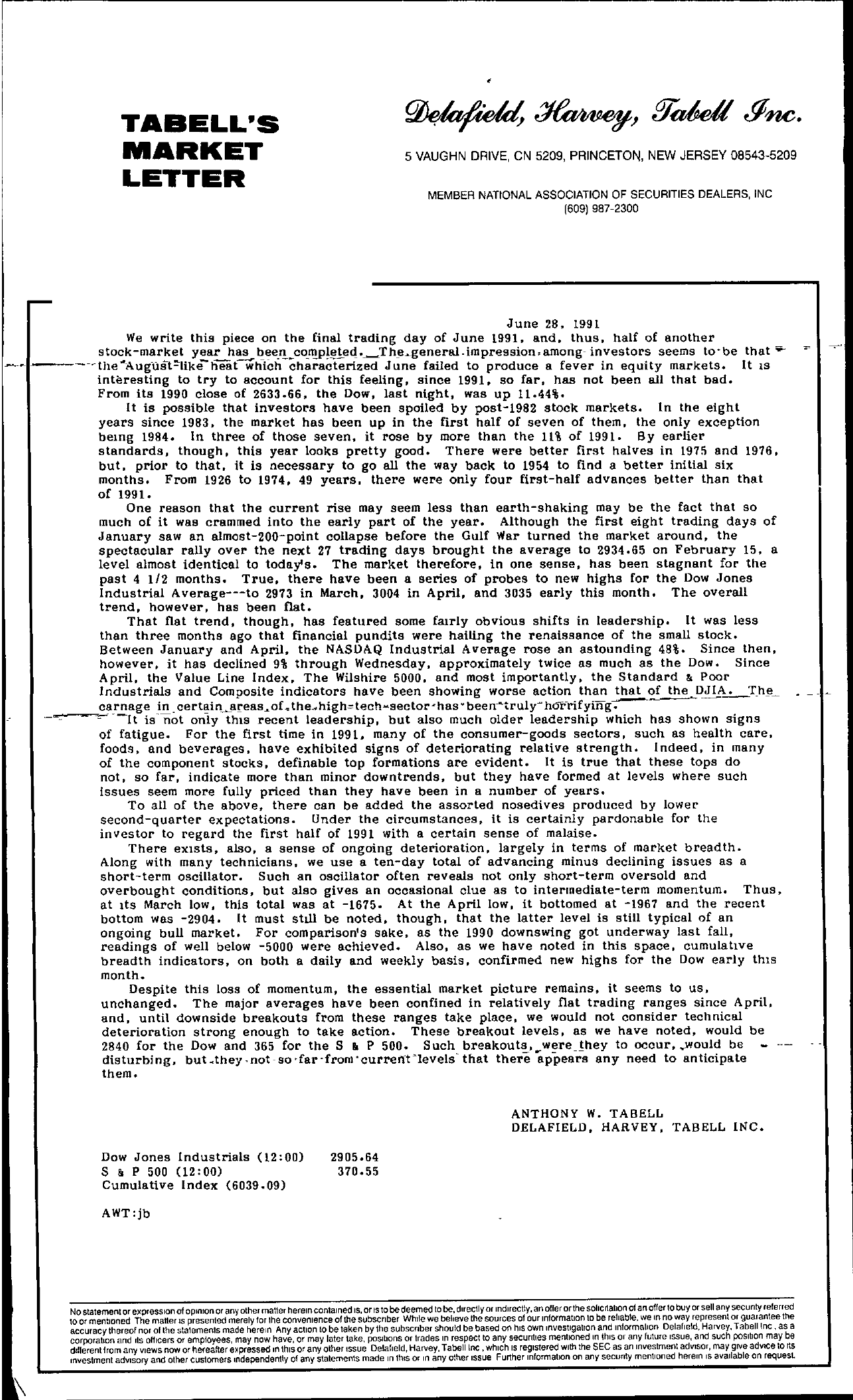 TABELL'S MARKET LETTER 5 VAUGHN DRIVE, CN 5209, PRINCETON, NEW JERSEY 08543-5209 MEMBER NATIONAL ASSOCIATION OF SECURITIES DEALERS, INC (609) 987-2300 June 28. 1991 We write this piece on the final trading day of June 1991. and. thus. half of another stock-market yeaheI!o.-coJt!p!let …………,Th..-general.impression,among- investors seems tobe that …. 1—–the ..Augu.sl-likeheat which characterized June failed to produce a fever in equity markets. It IS interesting to try to account for this feeling, since 1991. so far. has not been all that bad. From its 1990 close of 263366. the Dow. last night. was up 11.44. It is possible that investors have been spoiled by post-1982 stock markets. In the eight years since 1983. the market has been up in the first half of seven of them. the only exception bemg 1984. In three of those seven. it rose by more than the 11 of 1991 By earlier standards. though. this year looks pretty good. There were better first halves in 1975 and 1976. but. prior to that. it is necessary to go all the way back to 1954 to find a better initial six months. From 1926 to 1974. 49 years. there were only four first-half advances better than that of 1991. One reason that the current rise may seem less than earth-shaking may be the fact that so much of it was crammed into the early part of the year. Although the first eight trading days of January saw an almost-200-point collapse before the Gulf War turned the market around. the apectacular rally oVer the next 27 trading days brought the average to 2934.65 on February 15. a level almost identical to today's. The market therefore. in one sense. has been stagnant for the past 4 1/2 months. True. there have been a series of probes to new highs for the Dow Jones Industrial Average—to 2973 in March. 3004 in April. and 3035 early this month. The overall trend. however, has been flat. That flat trend. though. has featured some frurly obvious shifts in leadership. It was less than three months ago that financial pundits were hailing the renaissance of the small stock. Between January and April. the NASDAQ Industrial Average rose an astounding 48. Since then. however, it has declined 9 through Wednesday. approximately twice as much as the Dow. Since April. the Value Line Index. The Wilshire 5000. and most importantly. the Standard & Poor Industrials and Composite indicators have been showing worse action than that of the DJIA. Th!, carnage in certin—,,-areas-,- of… the… hightech …sector'has been–truly h6f-rif ying '-!-'–It is-not only thiS recent leadership, but also much older leadership Which has shown signs of fatigue. For the first time in 1991. many of the consumer-goods sectors. such as health care. foods. and beverages. have exhibited signs of deteriorating relative strength. Indeed. in many of the component stocks. definable top formations are evident. It is true that these tops do not. so far, indicate more than minor downtrends, but they have formed at levels where such issues seem more fully priced than they have been in a number of years. To all of the above. there can be added the assorted nosedives produced by lower second-quarter expectations. Under the circumstances. it is certainly pardonable for the investor to regard the first half of 1991 with a certain sense of malaise. There eXIsts. also, a sense of ongoing deterioration. largely in terms of market breadth. Along with many technicians. we use a ten-day total of advancing minus declining issues as a short-term oscillator. Such an oscillator often reveals not only short-term oversold and overbought conditions. but also gives an occasional clue as to intermediate-term momentum. Thus, at Its March low. this total was at -1675. At the April low. it bottomed at -1967 and the recent bottom was -2904. It must stlll be noted. though. that the latter level is still typical of an ongoing bull market. For comparison's sake. as the 1990 downswing got underway last fall. readings of well below -5000 were achieved. Also, as we have noted in this space. cumulative breadth indicators. on both a daily and weekly basis. confirmed new highs for the Dow early thIS month. Despite this loss of momentum, the essential market picture remains, it seems to us, unchanged. The major averages have been confined in relatively flat trading ranges since April, and. until downside breakouts from these ranges take place. we would not consider technical deterioration strong enough to take action. These breakout levels, as we have noted. would be 2840 for the Dow and 365 for the S & P 500. Such breakouts. were they to occur. would be disturbing. but ..they.not-soCar-fromcurrentilevels-that there appears any need to anticipate them. Dow Jones Industrials (12 00) S & P 500 (1200) Cumulative Index (603909) AWTjb 2905.64 370.55 ANTHONY W. TABELL DELAFIELD. HARVEY. TAB ELL INC. No statement or expression of oplillon or any other matter herelncanlalned IS, or IS to be deemed to be, directly or Indirectly, an offer arthe sollcrtallon oj an offerlO buy or sell any secunty ralerred to or mentioned The matter IS presented merely lor the convenience 01 the subscnber While we believe the sources of our Information to be rehable, we In no way represent or guarantee the accuracy thereof nor of the statemenls made herein Any action to be taken by the subSCriber should be based on his own Investlgal!on and information Delafield, Harvey, Tabellinc ,as a corporation and liS aHleers or employees, may now have, or may later lake, POSitions or trades In respect to any securities mentioned In thiS or any future Issue, and such poSition may be different from any views now or hereafter epressed In thiS or any other Issue Delafield, Harvey, Tabelllnc which IS registered With the SEC as an Investment adVIsor, may gIVe adVICe to lis Investment adVISOry and other customers mdependently of any statements made In thiS or In any other Issue Further Informallon on any security mentioned herein IS available on request