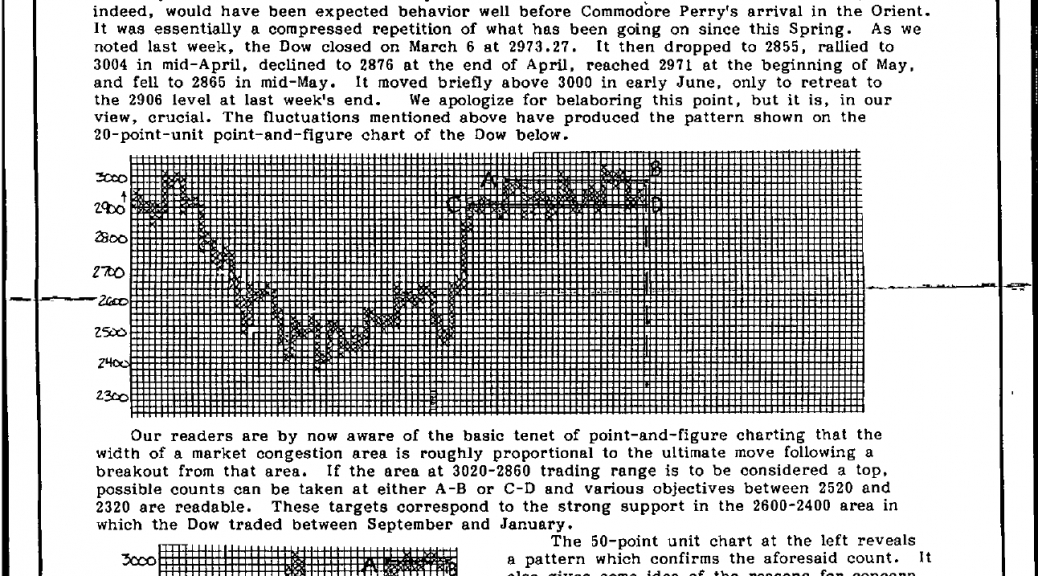 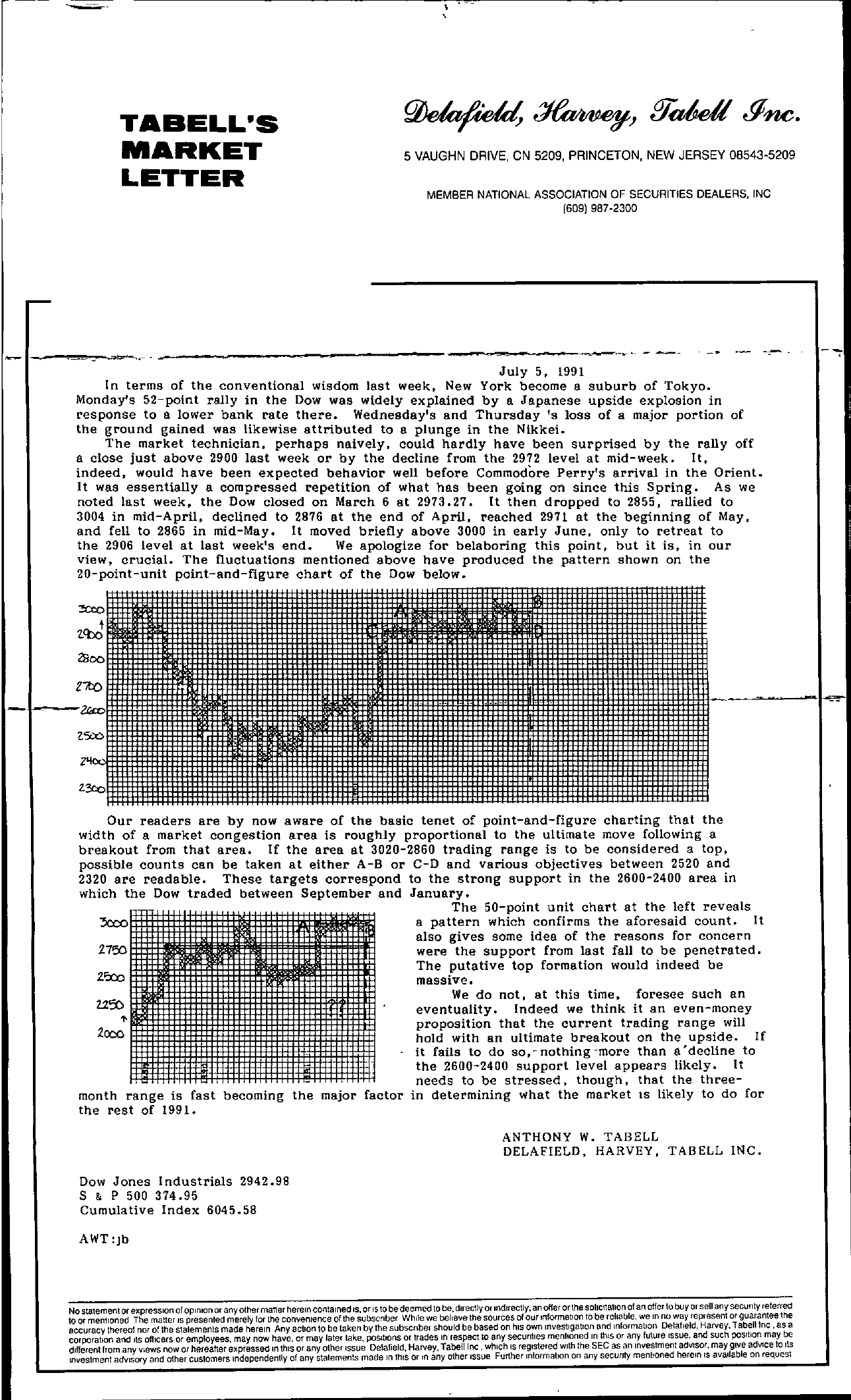 —–…– ,\ TABELLS MARKET LETTER 5 VAUGHN DRIVE, CN 5209, PRINCETON, NEW JERSEY 08543-5209 MEMBER NATIONAL ASSOCIATION OF SECURITIES DEALERS, INC 609) 987-2300 – ——————.- — — – .– July 5. 1991 In terms of the conventional wisdom last week. New York become a suburb of Tokyo Monday's 52-point rally in the Dow was widely explained by a Japanese upside explosion in response to a lower bank rate there. Wednesday's and Thursday's loss of a major portion of the ground gained was likewise attributed to a plunge in the Nikkei. The market technician. perhaps naively. could hardly have been surprised by the rally off a close just above 2900 last week or by the decline from the 2972 level at mid-week. It. indeed. would have been expected behavior well before Commodore Perry's arrival in the Orient. It was essentially a compressed repetition of what has been going on since this Spring. As we noted last week. the Dow closed on March 6 at 2973.27. It then dropped to 2855. rallied to 3004 in mid-April. declined to 2876 at the end of April. reached 2971 at the beginning of May. and fell to 2865 in mid-May. It moved briefly above 3000 in early June. only to retreat to the 2906 level at last week's end. We apologize for belaboring this point. but it is. in our view 7 crucial. The fluctuations mentioned above have produced the pattern shown on the 20-point-unit point-and-figure chart of the Dow below. -. Our readers are by now aware of the basic tenet of point-and-figure charting that the width of a market congestion area is roughly proportional to the ultimate move following a breakout from that area. If the area at 3020-2860 trading range is to be considered a top. possible counts can be taken at either A-B or C-D and various objectives between 2520 and 2320 are readable. These targets correspond to the strong support in the 2600-2400 area in l 1 l iwhich the Dow traded between September and January. LI The 50-point unit chart at the left reveals a pattern which confirms the aforesaid count. It also gives some idea of the reasons for concern 1.'17'JIIIIII were the support from last fall to be penetrated. . . The .putative top formation would indeed be maSSive. .. 2000 We do not, at this time. foresee such an eventuality. Indeed we think it an even-money proposition that the current trading range will hold with an ultimate breakout on the upside. If the 2600-2400 support level appears likely. It needs to be stressed. though. that the threemonth range is fast becoming the major factor in determining what the market IS likely to do for the rest of 1991. ANTHONY W. TAB ELL DELAFIELD. HARVEY. TAB ELL INC. Dow Jones Industrials 2942.98 S & P 500 374.95 Cumulative Index 6045.58 AWTJb No statement or expression of OpInion or any other matter herein contained IS, or IS to be deemed to be, dlreclly or Indirectly, an offer or the sollclla1lOn of an offer to buy or sen any secunty referred 10 or men1lOned The matler IS presented merely for the convenience of the subscnber While we believe the sources of our Information to be reliable, we In no way represent or guarantee the accuracy thereof nor ollhe slatemenls made herein Any acllon to be taken by the subscriber should be based on hiS own Investlgalton and Information Detafleld, Harvey, Tabellinc ,as a corporation and Its officers or employees, may now have, or may later take, POSitIOns or trades In respect to any secuntles mentioned In thiS or any future Issue, and such posItion may be different/rom any views now or hereafter expressed In thiS or any other Issue Delafield, Harvey, Tabelllnc, which IS regIstered With the SEC as an Investment adVisor, may give adVIce to Its IIwestment adVISOry and other customers Independently of any statements made In thiS or In any other Issue Further Informallon on any secuflty mentioned herein IS available on request