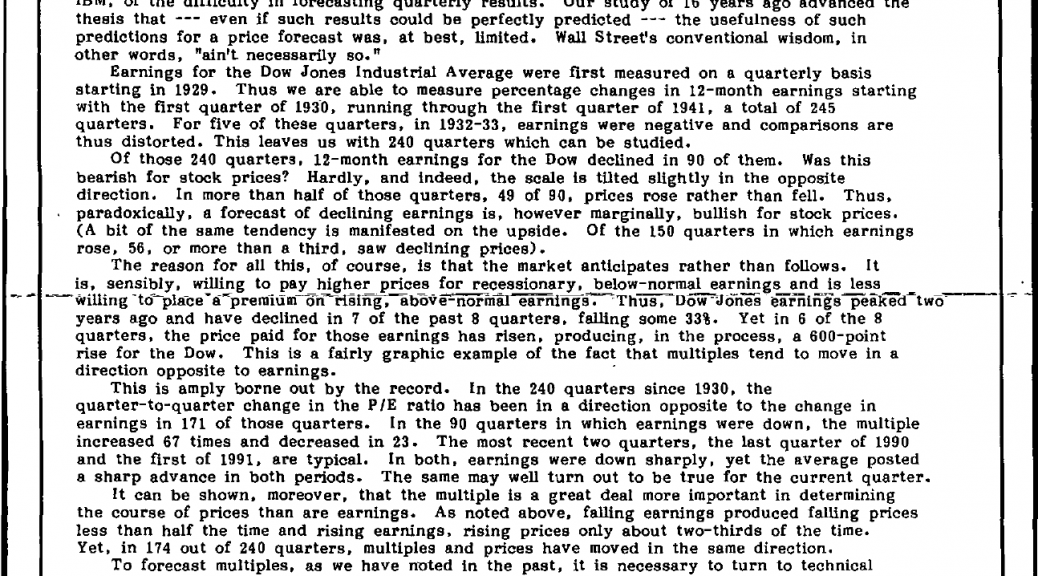 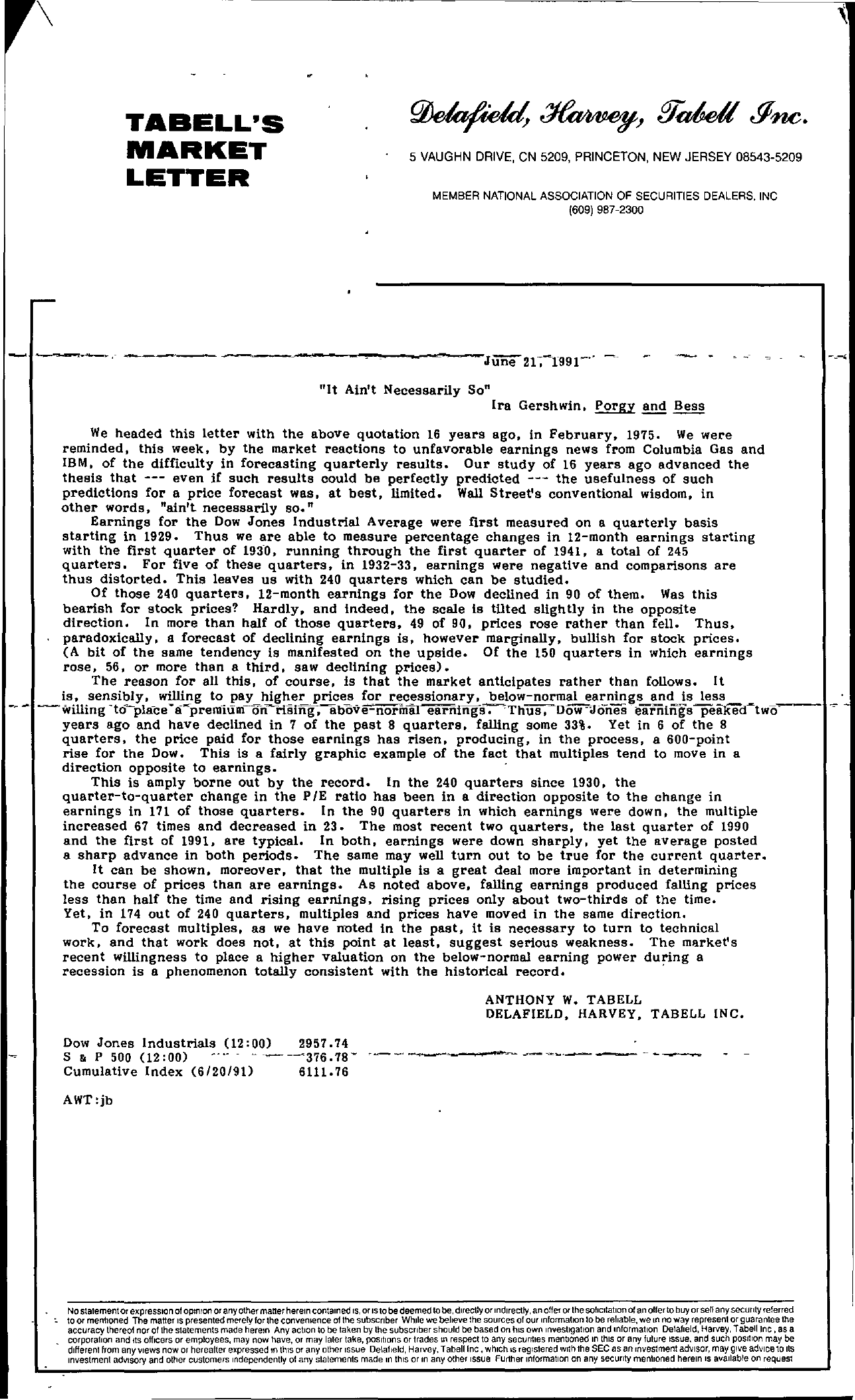 \ TABELLS MARKET LETTER 5 VAUGHN DRIVE, CN 5209, PRINCETON, NEW JERSEY 08543-5209 MEMBER NATIONAL ASSOCIATION OF SECURITIES DEALERS, INC (609) 9872300 –.-.- It Ain't Necessarily So Ira Gershwin. f2!gy and Bess We headed this letter with the above quotation 16 years ago. in February. 1975. We were reminded. this week. by the market reactions to unfavorable earnings news from Columbia Gas and IBM. of the difficulty in forecasting quarterly results. Our study of 16 years ago advanced the thesis that — even if such results could be perfectly predicted — the usefulness of such predictions for a price forecast was. at best. limited. Wall Street's conventional wisdom. in other words, ain't necessarily so. n Earnings for the Dow Jones Industrial Average were first measured on a quarterly basis starting in 1929. Thus we are able to measure percentage changes in 12-month earnings starting with the first quarter of 193'0. running through the first quarter of 1941. a total of 245 quarters. For five of these quarters. in 1932-33. earnings Were negative and comparisons are thus distorted. This leaves us with 240 quarters which can be studied. Of those 240 quarters. 12-month earnings for the Dow declined in 90 of them. Was this bearish for stock prices Hardly. and indeed. the scale is tilted slightly in the opposite direction. In more than half of those quarters. 49 of 90. prices rose rather than fell. Thus. paradoxically. a forecast of declining earnings is. however marginaliy. bullish for stock prices. (A bit of the same tendency is manifested on the upside. Of the 150 quarters in which earnings rose. 56. or more than a third. saw declining prices). The reason for all this. of course. is that the market anticipates rather than follows. It — is. sensibly. willing to pay higher prices for recessionary. below-normal earnings and is less –Willing tciplace a-premlum-onriBing. above-noriiiQIearnings-'Thus. Dow 'Jones earningsPeake(Ctwo- – – I years ago and have declined in 7 of the past 8 quarters. fslling some 33. Yet in 6 of the 8 quarters. the price paid for those earnings has risen. producing. in the process. a 600-point rise for the Dow. This is a falrly graphic example of the fact that multiples tend to move in a direction opposite to earnings. . This is amply borne out by the record. In the 240 quarters since 1930. the quarter-to-quarter change in the P IE ratio has been in a direction opposite to the change in earnings in 171 of those quarters. In the 90 quarters in which earnings were down. the multiple increased 67 times and decreased in 23. The most recent two quarters. the last quarter of 1990 and the first of 1991. are typical. In both. earnings were down sharply. yet the average posted a sharp advance in both periods. The same may well turn out to be true for the current quarter. It can be shown. moreover. that the multiple is a great deal more important in determining the course of prices than are earnings. As noted above. falling earnings produced fslling prices less than half the time and rising earnings. rising prices only about two-thirds of the time. Yet. in 174 out of 240 quarters. multiples and prices have moved in the same direction. To forecast multiples. as we have nuted in the past. it is necessary to turn to technicsl work. and that work does not. at this point at least. suggest serious weakness. The market's recent willingness to place a higher valuation on the below-normal earning power during a recession is a phenomenon totally consistent with the historical record. ' Dow Jones Industrials (12 00) 2957.74 S & P 500 (1200) —-376.78- Cumulative Index (6/20/9t 6111.76 ANTHONY W. TABELL DELAFIELD. HARVEY. TABELL INC. …- -,-. .—- ,,.- —– AWTjb No statement Or expression of opInion or any other matler herein contained IS, or IS to be deemed to be, directly or indirectly. an offer or the sollcltallon of an offer to buy or sell any secunty referred to or mentioned The matler IS presented merely for the convemence of the subSCriber While we believe the sources of our InformatIOn to be reliable. we In no way represent or guarantee the accuracy thereof nor of the statements made herein Any action to be taken by the subSCriber should be based on hIS own investigation and mformatlon Delafield, Harvey, Tabelllnc, as a corporation and tts officers or employees, may now have, or may later take, positions or trades tn respect to any securles mentioned In thiS or any future Issue, and such position may be dlReren! from any views now or hereafter epressed In thiS or any other Issue Delafield, Harvey, Tabelilnc , which IS registered wl!h the SEC as an mvestment adVisor, may give adVice to Its Investment advlso!), and oUler customers Independently 01 any slalements made In thiS or In any other Issue Further Information on any security mentioned herein IS available on request