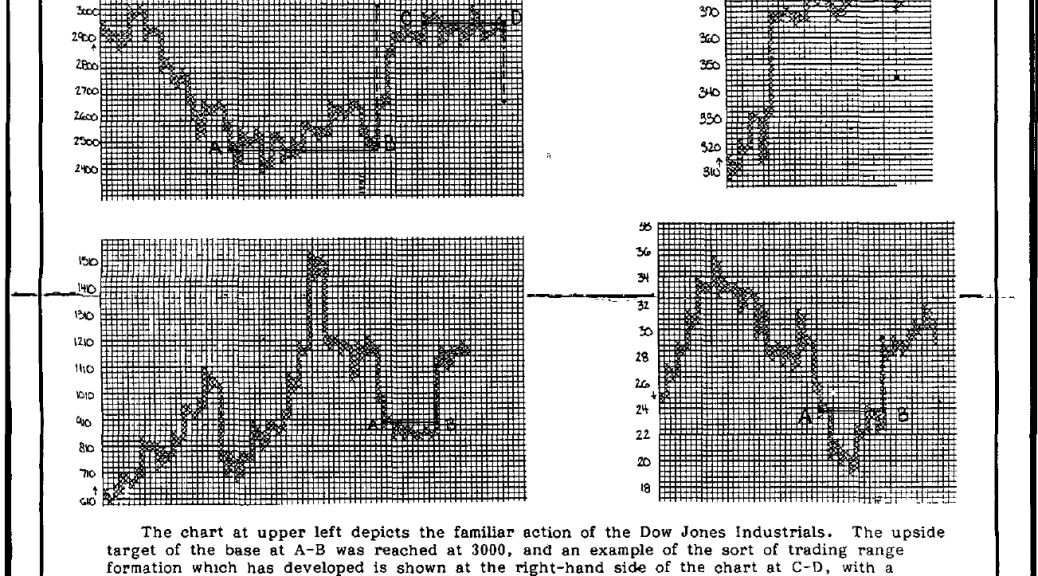 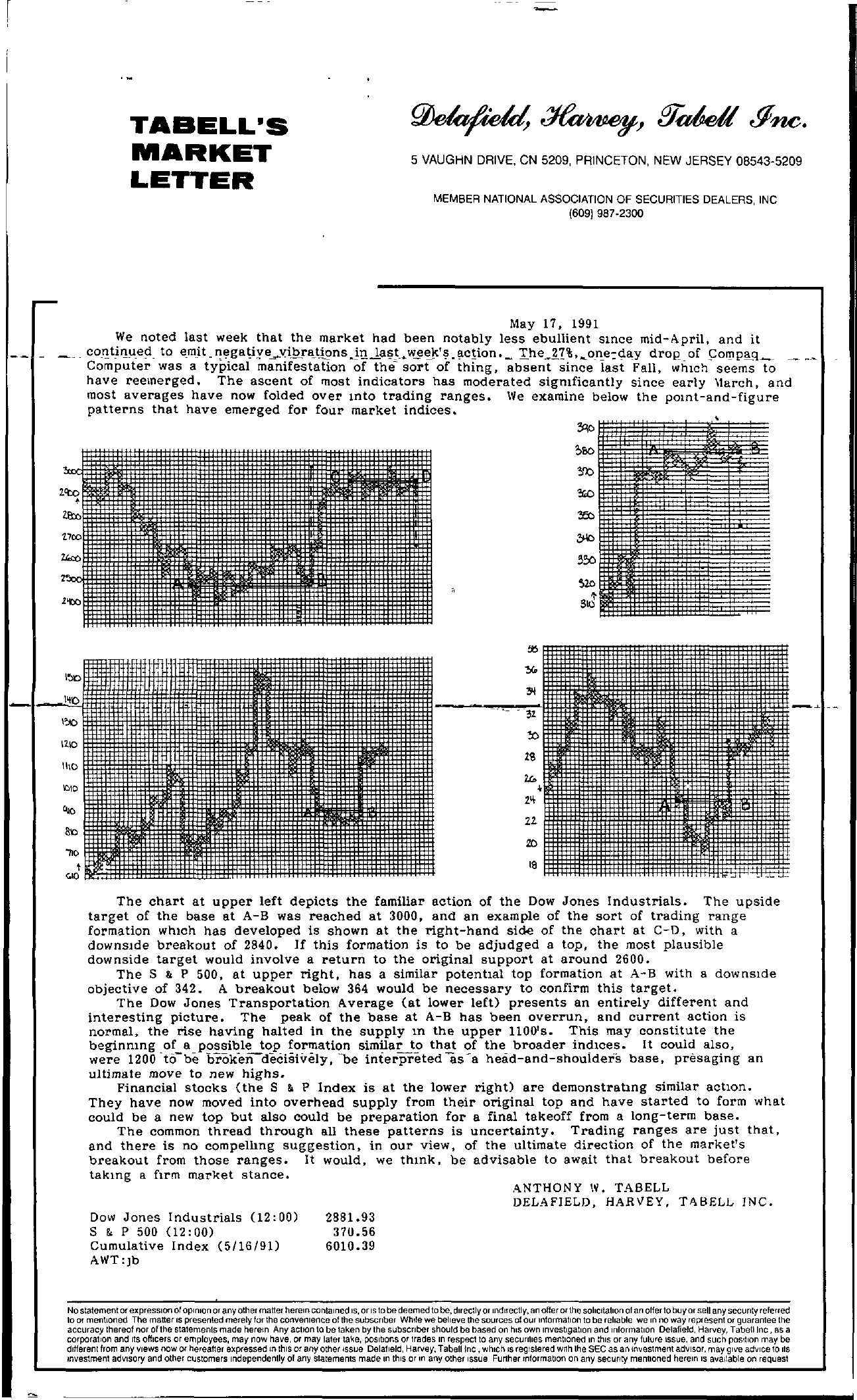 TABELL'S MARKET LETTER 5 VAUGHN DRIVE. CN 5209, PRINCETON, NEW JERSEY 08543-5209 MEMBER NATIONAL ASSOCIATION OF SECURITIES DEALERS. INC (609) 987-2300 !– – May 17, 1991 We noted last week that the market had been notably less ebullient smce mid-April, and it . cO.rJtillue to emJtgaye—ribraJi9nsJrr..la!t. w1'lc!ion. Ihe17,,-o'!e9Y drop- of sol!lp!!..q Computer was a typical manifestation of the- sort of thing, absent since last Fall, winch seems to have reemerged.. The ascent of most indicators has moderated signlficantly since early \larch, and most averages have now folded over mto trading ranges. patterns that have emerged for four market indices. .We examine below the pOlnt-and-figure . C I!80 ,'1 ,2 !I;O !EO !\C 5 , 520 sid IID I, I 1110 Iho '0 '0 a mil1to \ 010 !Ij II II 3! 31 !O IS U. 2 22 2C 18 I. The chart at upper left depicts the familiar action of the Dow Jones Industrials. The upside target of the base at A-B was reached at 3000, and an example of the sort of trading range formation which has developed is shown at the right-hand sid of the chart at C-D, with a downside breakout of 2840. If this formation is to be adjudged a top, the most plausible downside target would involve a return to the original support at around 2600. The S & P 500, at upper right, has a similar potentlal top formation at A-B with a downside objective of 342. A breakout below 364 would be necessary to confirm this target. The Dow Jones Transportation Average (at lower left) presents an entirely different and interesting picture. The peak of the base at A-B has been overrun, and current action is normal, the rise having halted in the supply m the upper 1100's. This may constitute the beginmng of a possible top formation similar to that of the broader indices. It could also, were 1200 -to-be hrokendecisively, -be interiireted Qs-a head-and-shou\der-s base, presaging an ultimate move to new highs .. Financial stocks (the S & P Index is at the lower right) are demonstratmg similar actIOn. They have now moved into overhead supply from their original top and have started to form what could be a new top but also could be preparation for a final takeoff from a long-term base. The common thread through all these patterns is uncertainty. Trading ranges are just that, and there is no compelhng suggestion, in our view, of the ultimate direction of the market's breakout from those ranges. It would, we thmk, be advisable to await that breakout before taklng a flrm market slanceO' ANTHONY IV. TABELL DELAFIELD, HARVEY, TABELL INC. Dow Jones Industrials 02 00) 2881.93 S & P 500 02 00) 370.56 Cumulative Index (5/16/91) 6010.39 AWTlb No statement or expression of opinion or any other matter herein contained IS, or IS to be deemed to be, dlrecttyor Indirectly, an offer orthe soliCitation of an offer to buyor sell any secUrity referred to or mentioned The matter IS presented merety for the convenience of the subSCriber While we believe the sources of our mformatlon to be rehable we In no way represent or guarantee the accuracy thereof nor of the statements made herem Any action to be taken by the subSCriber should be based on hiS own investigation and InformallOn Delafield, Harvey, Tabell Inc, as a corporallOn and Its officers or employees, may now have, or may later take, poslbons or trades In respect to any securities mentioned In thiS or any future Issue, and such position may be different from any views now or hereafter expressed m thiS or any other Issue Delafield, Harvey, Tabellinc , which IS registered wl1h the SEC as an Investment adVISor, may give adVice to lIs Investment adVISOry and other customers Independenlly of any statements made In thiS or many olher Issue Further Information on any secUrity mentioned herem IS available on request