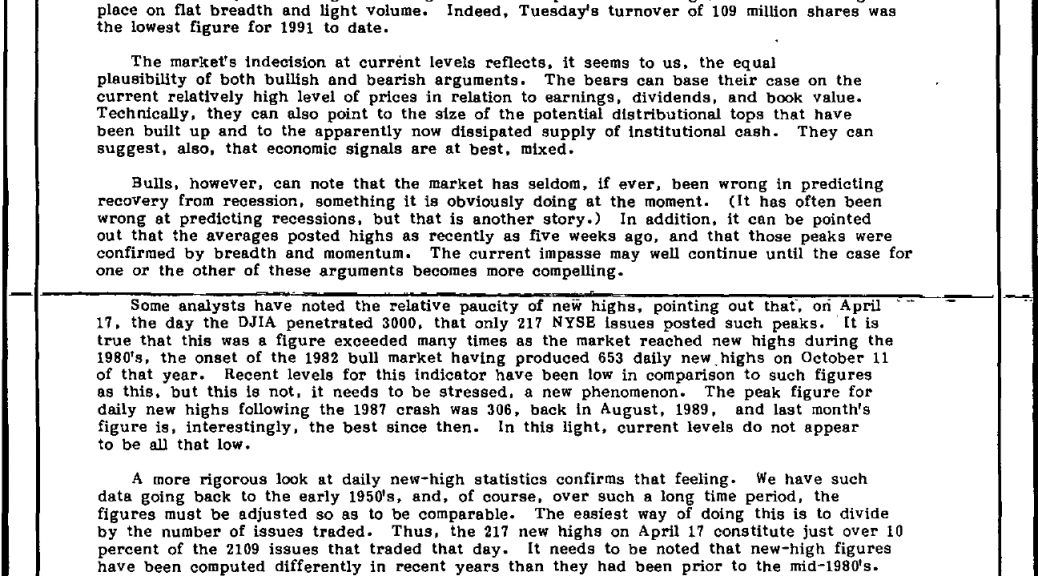 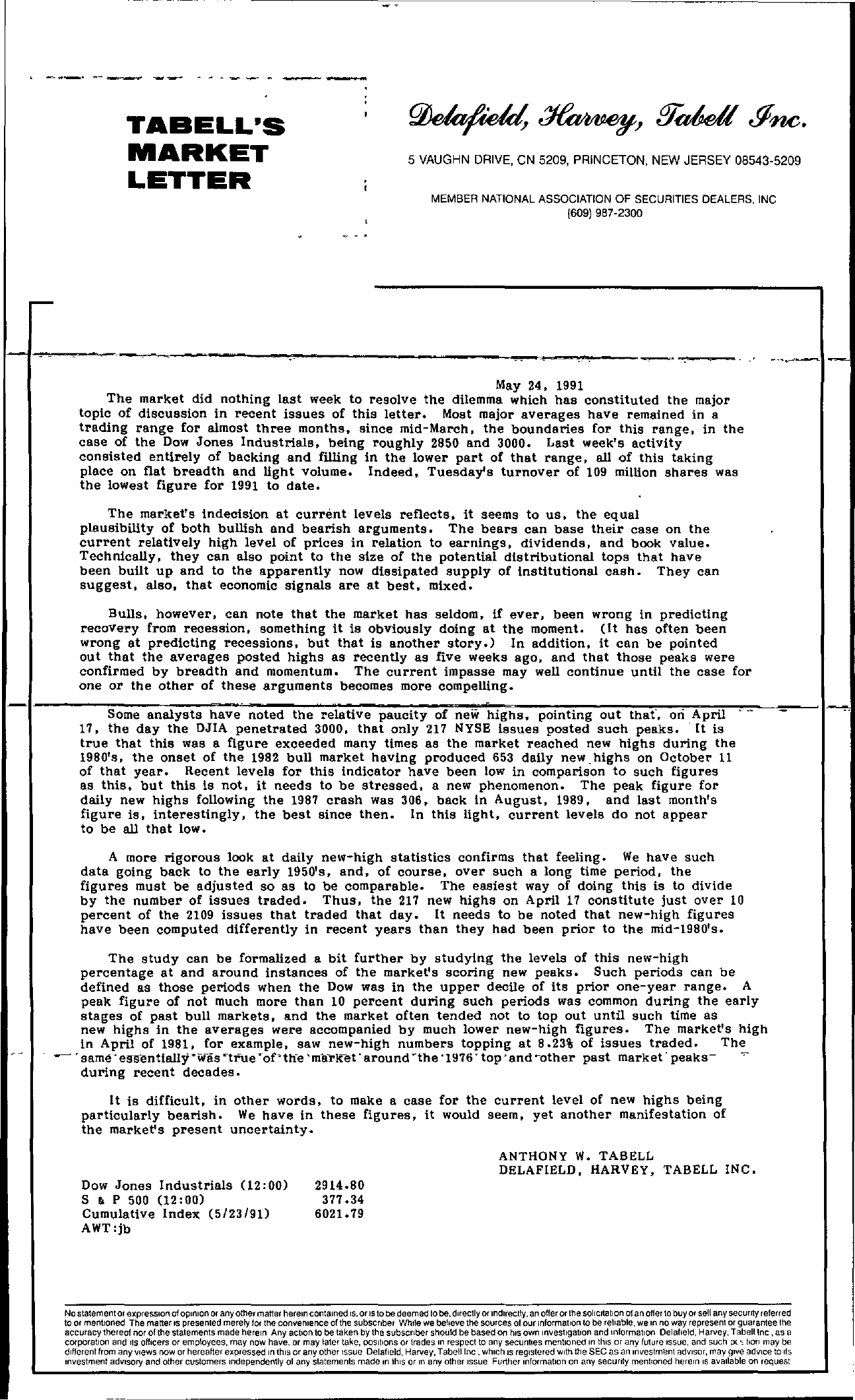 TABELL-S MARKET LETTER 5 VAUGHN DRIVE, eN 5209, PRINCETON, NEW JERSEY 08543-5209 MEMBER NATIONAL ASSOCIATION OF SECURITIES DEALERS. INC 1609) 987-2300 May 24, 1991 The market did nothing last week to resolve the dilemma wllicll has constituted tile major topic of discussion in recent issues of tllis letter. Most major averages Ilave remained in a trading range for almost three months, since mid-Marcil, tile boundaries for tllis range, in tile case of tile Dow Jones Industrials, being roughly 2850 and 3000. Last week's activity consisted entirely of backing and filling in the lower part of that range, all of this taking place on flat breadth and light volume. Indeed, Tuesday's turnover of 109 million sllares was tile lowest figure for 1991 to date. Tile market's indecision at current levels reflects, it seems to us, the equal plausibility of botll bullisll and bearish arguments. The bears can base their case on the current relatively Iligh level of prices in relation to earnings, dividends, and book value. Tecllnically, they can also point to tile size of tile potential distributional tops that Ilave been built up and to tile apparently now dissipated supply of institutional casll. They can suggest, also, tllat economic signals are at best, mixed. Bulls, however, can note that tile market has seldom, if ever, been wrong in predicting recovery from recession, something it is obviously doing at the moment. (It has often been wrong at predicting recessions, but tllat is another story.) In addition, it can be pointed out tilat the averages posted higlls as recently as five weeks ago, and that those peaks were confirmed by breadtll and momentum. The current impasse may well continue until the case for one or tile other of these arguments becomes more compelling. Some analysts Ilave noted the relative paucity of new highs, pointing out thar, ori April … 17, the day the DJIA penetrated 3000, that only 217 NYSE issues posted sucll peaks. 'It is true tllat this was a figure exceeded many times as the market reached new higlls during tile 1980's, the onset of the 1982 bull market Ilaving produced 653 daily new. highs on October 11 of that year. Recent levels for tllis indicator have been low in comparison to such figures as this. but this is not, it needs to be stressed, a new phenomenon. The peak figure for daily new highs following the 1987 crash was 306, back in August, 1989, and last month's figure is, interestingly, the best since then. In this light, current levels do not appear to be all that low. A more rigorous look at daily new-high statistics confirms that feeling. We have such data going back to the early 1950's, and, of course, over such a long time period, the figures must be adjusted so as to be comparable. The easiest way of doing this is to divide by the number of issues traded. Thus, the 217 new highs on April 17 constitute just over 10 percent of the 2109 issues that traded that day. It needs to be noted that new-high figures have been computed differently in recent years than they had been prior to the mid-1980's. The study can be formallzed a bit further by studying the levels of this new-high percentage at and around instances of the market's scoring new peaks. Such periods can be defined as those periods when the Dow was in the upper decile of its prior one-year range. A peak figure of not much more than 10 percent during such periods was common during the early stages of past bull markets, and the market often tended not to top out until such time as new highs in the averages were accompanied by much lower new-high figures. The market's high in April of 1981, for example, saw new-high numbers topping at 8.23 of issues traded. The — . same essentially 'Was ..-true ..-of Ufe . mll-rk-et . around the 1976 T top' and ..other past market' peaks- -;- during recent decades. It is difficult, in other words, to make a case for the current level of new highs being particularly bearish. We have in these figures, it would seem, yet another manifestation of the market's present uncertainty. Dow Jones Industrials 0200) S & P 500 (1200) Cumulative Index (5/23/91) AWTjb 2914.80 377.34 6021.79 ANTHONY W. TAB ELL DELAFIELD, HARVEY, TABELL INC. No statementor expression of opinion or any other matter herein contained 1, or IS to be deemed to be, directly or Indirectly. an offer orlhe solicrtatlon of an offer to buy or sel! any securrty referred to or mentIOned The maner IS presented merely for the convenience of the subSCriber While we believe the sources of our Information to be rehable, we In no way represent or guarantee the accuracy thereof nor of the statements made herein Any acllon to be taken by the subscnber should be based on hiS own Investigation and information Delafield, Harvey, Tabelllnc, as a corporation and liS officers or employees, may now have, or may later take, poslhons or trades In respect to any secUrities menllOned In thiS or any future Issue, and such pt'. hon may be different from any views now or hereafter expressed In this or any other Issue Delafield, Harvey, Tabelllnc, which IS registered With the SEC as an Investment adVisor, may give adVice to ItS Investment adVISOry and other customers Independently of any statements made In thiS or In any other Issue Further information on any security mentioned herein IS available on request