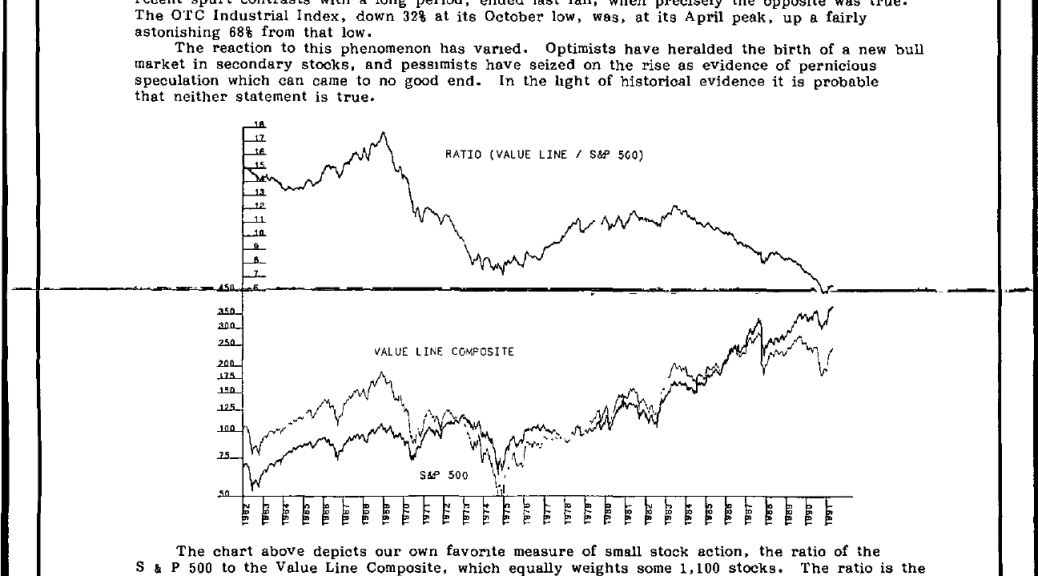 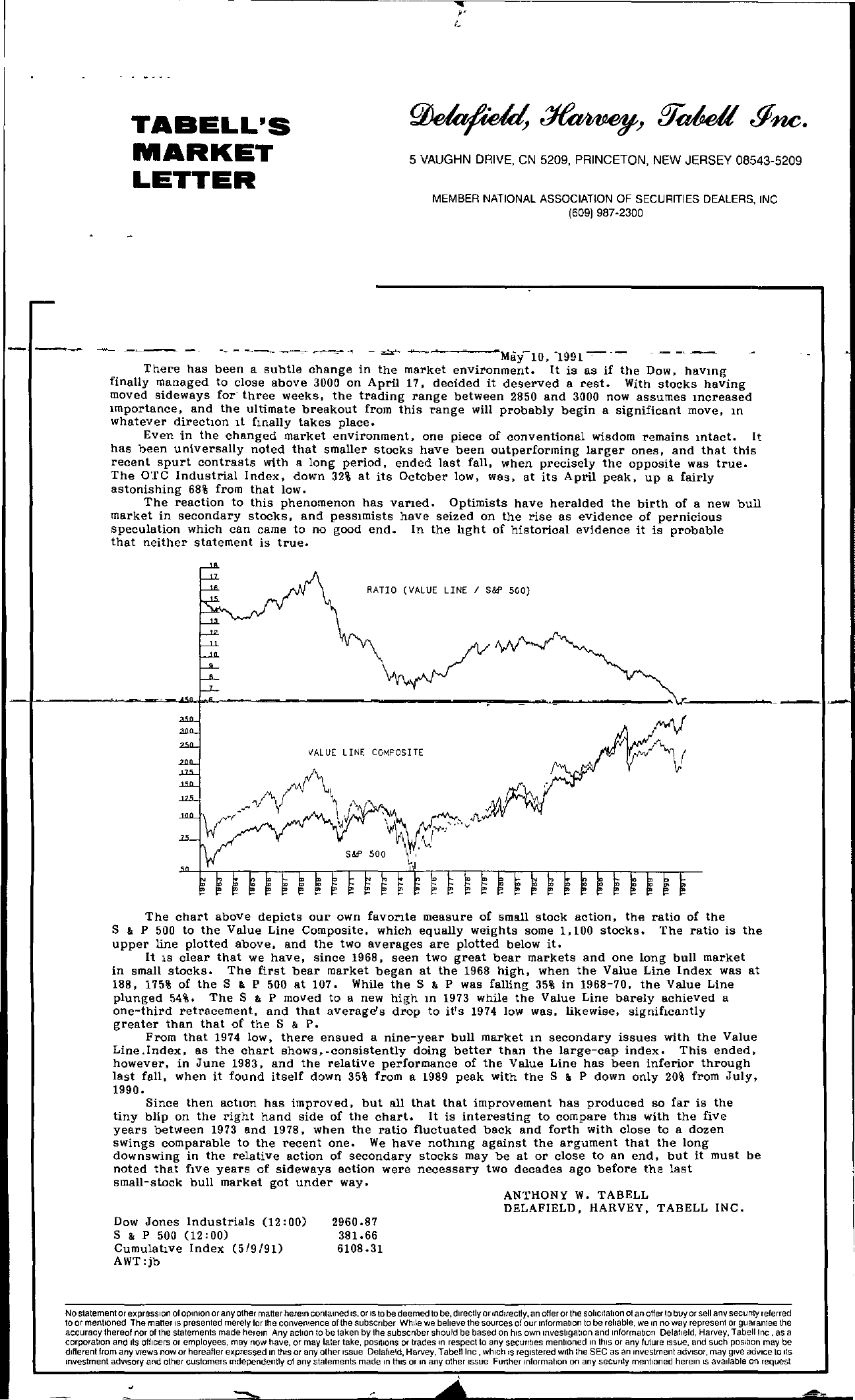 TABELL'S MARKET LETTER ,- '. 5 VAUGHN DRIVE, CN 5209, PRINCETON, NEW JERSEY 08543-5209 MEMBER NATIONAL ASSOCIATION OF SECURITIES DEALERS, INC (609) 987-2300 —— – May10,'1991—– —,- There has been a sUbtle change in the market environment. It is as if the Dow I havIng finally managed to close above 3000 on April 17. decided it deserved a rest. With stocks having moved sideways for- three weeks. the trading range between 2850 and 3000 now assumes Increased Importance, and the ultimate breakout from this range will probably begin a significant move. In whatever directIOn It fmally takes place. Even in the changed market environment. one piece of conventional wisdom remains mtact. It has been universally noted that smaller stocks have been outperforming larger ones. and that this recent spurt contrasts with a long period, ended last fall. when precisely the opposite was true. The OTe Industrial Index. down 32 at its October low, was. at its April peak, up a fairly astonishing 68 from that low. The reaction to this phenomenon has vaned. Optimists have heralded the birth of a new bull market in secondary stocks, and pessImists have seized on the rise as evidence of pernicious speculation which can came to no good end. In the hght of historical evidence it is probable that neither statement is true. RATIO (VALUE LINE / S&P 5GO) VALUE LINE COMPOSITE — The chart above depicts our own favonte measure of small stock action, the ratio of the S & P 500 to the Value Line Composite. which equally weights some 1,100 stocks. The ratio is the upper line plotted above, and the two averages are plotted below it. It IS clear that we have, since 1968 J seen two great bear markets and one long bull market in small stocks. The first bear market began at the 1968 high. when the Value Line Index was at 188. 175 of the S & P 500 at 107. While the S & P was falling 35 in 1968-70, the Value Line plunged 54. The S 81 P moved to 8 new high In 1973 While the Value Line barely achieved a one-third retracement, and that averages drop to it's 1974 low was, likewise. signifIcantly greater than that of the S & P. From that 1974 low. there ensued a nine-year bull market In secondary issues with the Value Line.Index, as the chart shows,Mconsistently doing better than the large-cap index. This ended. however. in June 1983. and the relative performance of the Value Line has been inferior through last fall, when it found itself down 35 from a 1989 peak with the S & P down only 20 from July, 1990. Since then achon has improved, but all that that improvement has produced so far is the tiny blip on the right hand side of the chart. It is interesting to compare thIS with the five years between 1973 and 1978. when the ratio fluctuated back and forth with close to a dozen swings comparable to the recent one. We have nothIng against the argument that the long downswing in the relative action of secondary stocks may be at or close to an end. but it must be noted that fIve years of sideways action were necessary two decades ago before the last smail-stock bull market got under way. ANTHONY W. TABELL DELAFIELD, HARVEY, TABELL INC. Dow Jones Industrials (12 00) 2960.87 S & P 500 (1200) 381.66 Cumulabve Index (5/9/91) 6108.31 AWTjb No statement or expression of opinIOn or any olher maner herein contained IS, or IS to be deemed to be, dlrecllyorlndlrectly, an offer or the soliCllalion Of an offer 10 buy or sell any secunty referred to or mentioned The maner IS presented merety for the convenience of the ubscrlber While we believe the sources of our Informallon 10 be reliable, we In no way represent or guarantee the accuracy thereof nor of the statements made herein Any action to be taken by the subscnber should be based on hiS own investigation and Information Delafield, Harvey, Tabelllnc, as a corporation and Its officers or employees, may now have, or may laler take, positions or trades In respect to any secUrities menlloned In thiS or any future Issue, and such position may be different from any views now or hereafter expressed In thiS or any other Issue Delafield, Harvey, Tabellinc , which IS registered With Ihe SEC as an Investment adVisor, may give adVice 10 'Is Investment adViSOry and other customers Independently 01 any statements made In thiS or In any other issue Further information on any secunly mentioned herein IS available on request