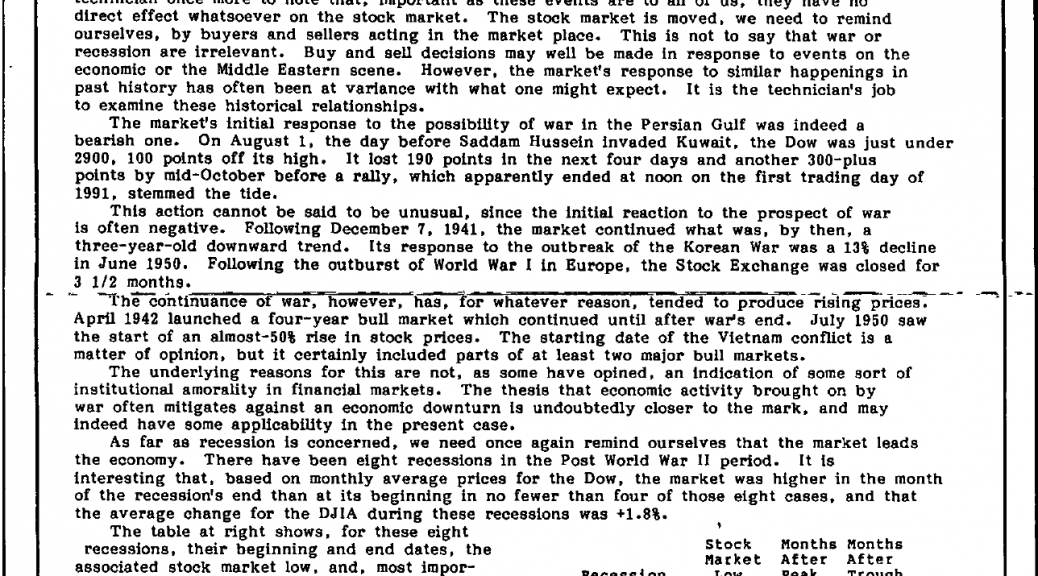 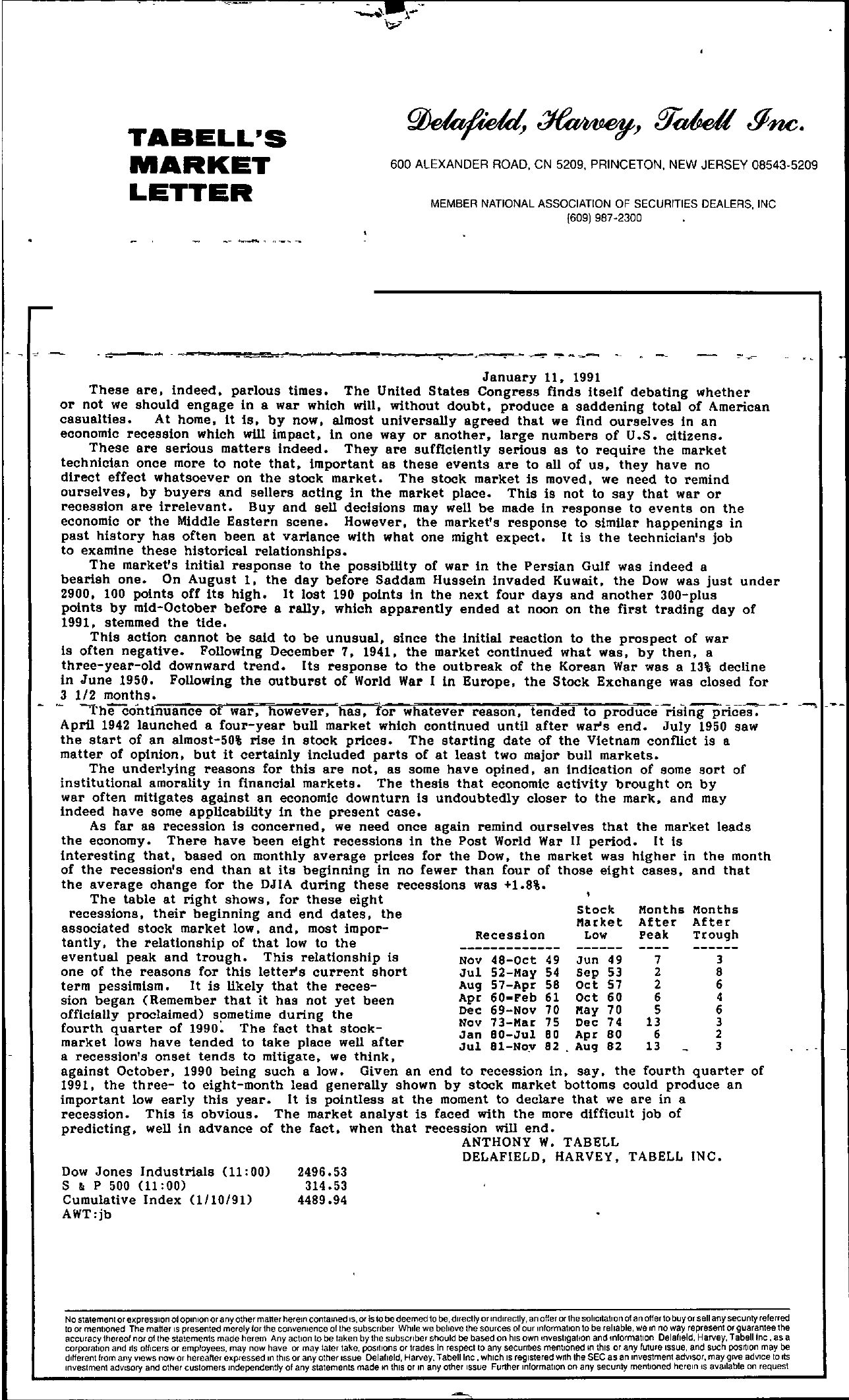 TABELL'S MARKET LETTER 600 ALEXANDER ROAD, CN 5209, PRINCETON, NEW JERSEY 08543-5209 MEMBER NATIONAL ASSOCIATION OF SECURITIES DEALERS, INC 609) 987-2300 – -, January II, 1991 These are, Indeed, parlous times. The United States Congress finds Itself debating whether or not we should engage In a war which will, without doubt, produce a saddening total of American casualties. At home, It Is, by now, almost universally agreed that we find ourselves In an economic recession which will Impact, In one way or another, large numbers of U.S. citizens. These are serious matters Indeed. They are sufficiently serious as to require the market technician once more to note that, Important as these events are to all of us, they have no direct effect whatsoever on the stock market. The stock market Is moved, we need to remind ourselves, by buyers and sellers acting in the market place. This is not to say that war or recession are irrelevant. Buy and sell decisions may well be made In response to events on the economic or the Middle Eastern scene. However, the market's response to similar happenings In past history has often been at variance with what one might expect. It Is the technician's job to examine these historical relationships. The market's Initial response to the possibility of war in the Persian Gulf was Indeed a bearish one. On August 1, the day before Saddam Hussein Invaded Kuwait, the Dow was just under 2900, 100 points off its high. It lost 190 points In the next four days and another 300-plus points by mid-October before a rally, which apparently ended at noon on the first trading day of 1991, stemmed the tide. This action cannot be said to be unusual, since the Initial reaction to the prospect of war Is often negative. Following December 7, 1941, the market continued what was, by then, a three-year-old downward trend. Its response to the outbreak of the Korean War was a 13 decline In June 1950. Following the outburst of World War I In Europe, the Stock Exchange was closed for 3 1/'2hecmcinotln;t'hn-su.-a-n-c-e-of-w-a-r-,-'hro-w-e-v-e-r-,-has, for whatever reason, tended to produce rising prices; — April 1942 launched a four-year bull market which continued until after war's end. July 1950 saw the start of an almost-50 rise in stock prices. The starting date of the Vietnam conflict Is a matter of opinion, but it certainly included parts of at least two major bull markets. The underlying reasons for this are not, as some have opined, an Indication of some sort of institutional amorality in financial markets. The thesis that economic activity brought on by war often mitigates against an economic downturn Is undoubtedly closer to the mark, and may Indeed have some applicability In the present case. As far as recession Is concerned, we need once again remind ourselves that the market leads the economy. There have been eight recessions in the Post World War II period. It is interesting that, based on monthly average prices for the Dow, the market was higher in the month of the recession's end than at its beginning in no fewer than four of those eight cases, and that the average change for the DJIA during these recessions was 1.8. The table at right shows, for these eight recessions, their beginning and end dates, the associated stock market low, and, most importantly, the relationship of that low to the Recession stock Months Months Market After After Low peak Trough eventual peak and trough. This relationship is one of the reasons for this letter's current short term pessimism. It is likely that the recession began (Remember that it has not yet been officially proclaimed) sometime during the fourth quarter of 1990 The fact that stockmarket lows have tended to take place well after a recession's onset tends to mitigate. we think, Nov 4S-0ct 49 Jun 49 Jul 52-May 54 Sep 53 Aug 57-Apr 5S oct 57 Apr 60-Feb 61 Oct 60 Dec 69-Nov 70 May 70 Nov 73-Msr 75 Dec 74 Jan SO-Jul SO Apr 90 Jul 81-No,v 92 . Auq 82 7 2 2 6 5 13 6 13 3 B 6 4 6 3 2 3 against October, 1990 being such a low. Given an end to recession In, say, the fourth quarter of 1991, the three- to eight-month lead generally shown by stock market bottoms could produce an important low early this year. It is pointless at the moment to declare that we are in a recession. This Is obvious. The market analyst is faced with the more difficult job of predicting, well in advance of the fact, when that recession will end. ANTHONY W. TAB ELL DELAFIELD, HARVEY, TAB ELL INC. Dow Jones Industrials (11 00) 2496.53 S & P 500 (11 00) 314 .53 Cumulative Index (1/10/91) 4489.94 AWTjb No statement or expression oj Opinion or any other maner herem contamed IS, or Is to be deemed to be, directly or Indirectly, an oHer or the soliCitation of an oHer to buy or sell any secunty referred to or menllOned The matter IS presented merely for the convenience of the subscriber While we believe the sources of our information to be reliable, we In no way represent or guarantee the accuracy thereof nor of the statements made herern Any action to be taken by the subscrrber should be based on hiS own InvestlgallOn and information Delafield, Harvey, Tabellinc , as a corporation and I1s oHlcers or employees, may now have or may tater take, POSitionS or trades In respeclto any securrbes mentioned In thiS or any future Issue, and such posrtlon may be dlHerent from any views now or hereafter expressed In this or any other Issue Delafield, Harvey, Tabelllnc, which IS registered wrth the SEC as an Investment advisor, may gIVe adVIce to Its Investment advISOry and other customers rndependently of any statements made In thiS or rn any other Issue Further Information on any secunty menboned herein IS available on request