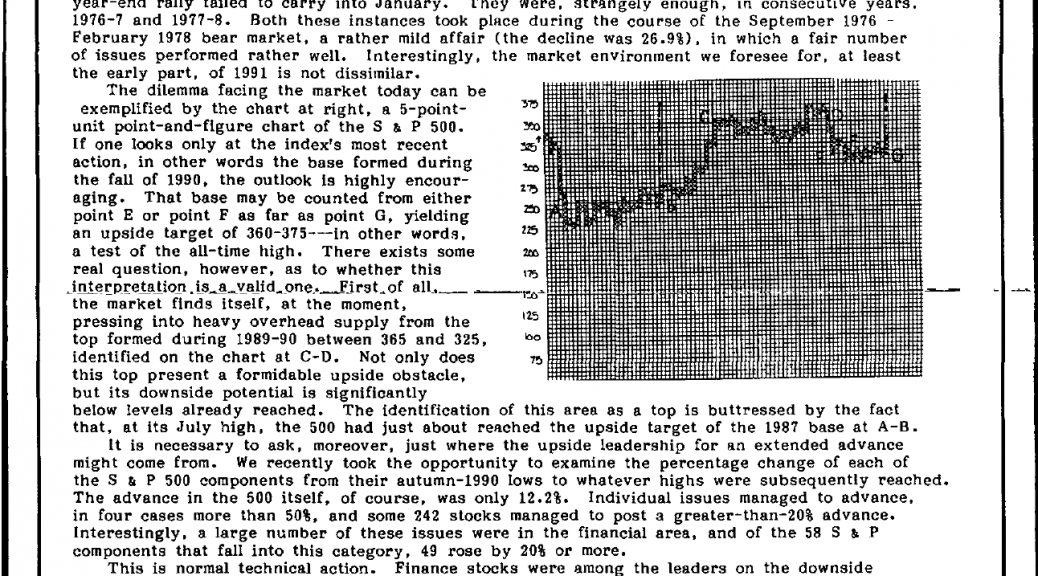 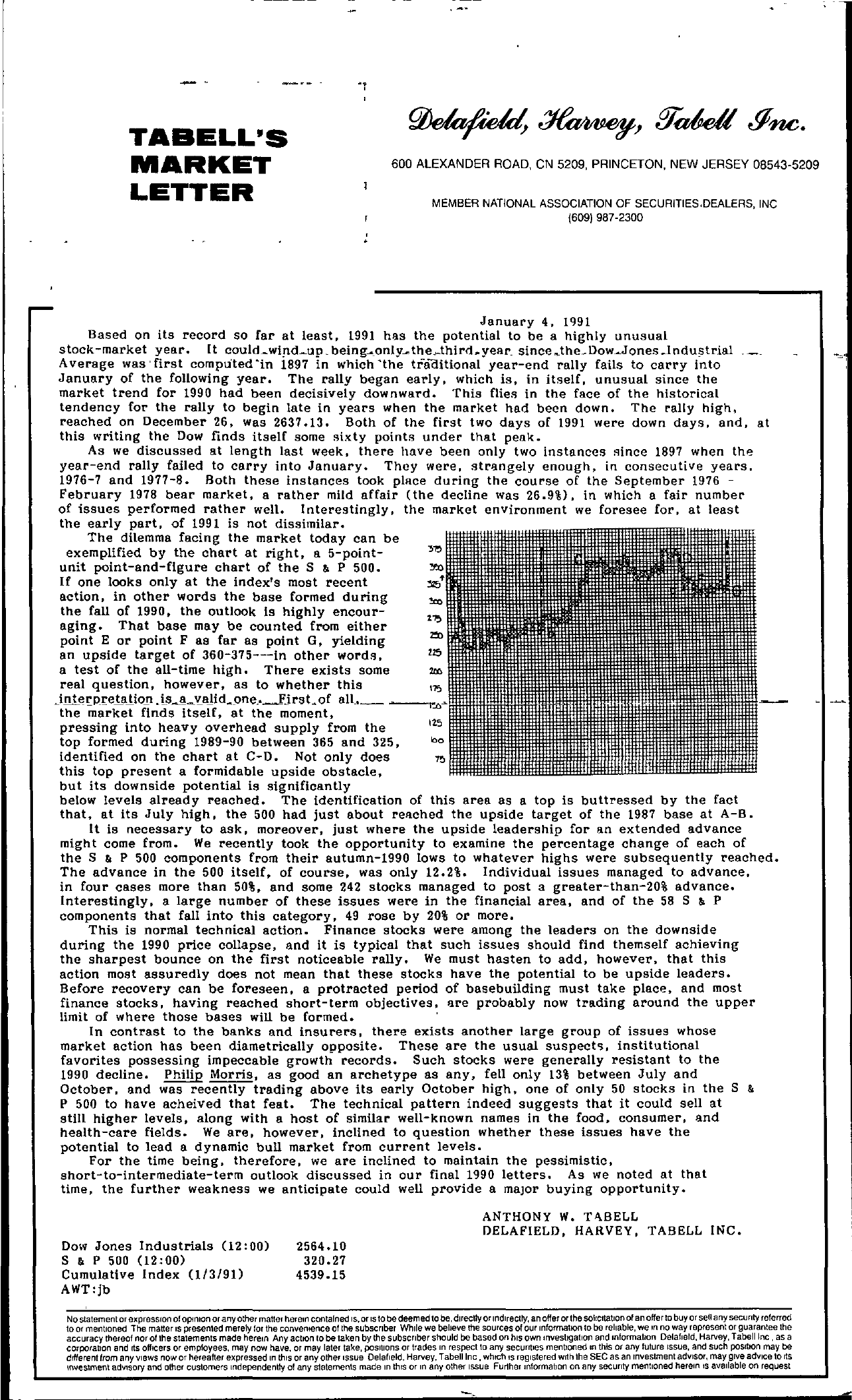 , — TABELL'S MARKET LETTER 600 ALEXANDER ROAD, eN 5209, PRINCETON, NEW JERSEY 08543-5209 MEMBER NATIONAL ASSOCIATION OF SECURITIES,DEALERS, INC (6091987-2300 January 4. Iq91 Based on its record so far at least. 1991 has the potential to be a highly unusual stock-market year. It couldwi!ldup, beingonly thethird.year since .theDowJ onesIndustrial Average was' first compu'ted -in 1897 in which'the traaitional year-end rally fails to carry into January of the following year. The rally began early. which is. in itself. unusual since the market trend for 1990 had been decisively downward. This flies in the face of the historical tendency for the rally to begin late in years when the market had been down. The rally high. reached on December 26. Was 2637.13. Both of the first two days of 1991 were down days. and. at this writing the Dow finds itself some sixty points under that peak As we discussed at length last week. there have been only two instances ince 1897 when th year-end rally failed to carry into January. They were. strangely enough. in consecutive years. 1976-7 and 1977-8 Both these instances took place during the course of the September 1976 – February 1978 bear market. a rather mild affair (the decline was 26.9). in which a fair number of issues performed rather well. Interestingly, the market environment we foresee for. at least the early part. of 1991 is not dissimilar. The dilemma facing the market today can be exemplified by the chart at right, a 5-point- unit point-and-figure chart of the S & P 500. IC one looks only at the index's most recent action, in other words the base formed during the fall of 1990. the outlook is highly encour- aging. That base may be counted from either point E or point F as far as point G, yielding an upside target of 360-375—in other words. a test of the all-time high. There exists some real question, however, as to whether this jnterpre1llioll jlU!1alid9ne,.Fjrst.of alL. '''''' the market finds itself, at the moment, pressing into heavy overhead supply from the top formed during 1989-90 between 365 and 325, identified on the chart at C-D. Not only does this top present a formidable upside obstacle. but its downside potential is significantly below levels already reached. The identification of this area as a top is buttressed by the fact that. at its July high, the 500 had just about reRched the upside target of the 1987 base at A-B. It is necessary to ask, moreover, just where the upside leadership for an extended advance might come from. We recently took the opportunity to examine the percentage change of each of the S & P 500 components from their autumn-1990 lows to whatever highs were subsequently reached. The advance in the 500 itself, of course, was only 12.2. Individual issues managed to advance. in four cases more than 50. and some 242 stocks managed to post a greater-than-20 advance. Interestingly. a large number of these issues were in the financial area. and of the 58 S & P components that fall into this category, 49 rose by 20 or more. This is normal technical action. Finance stocks were among the leaders on the downside during the 1990 price collapse, and it is typical that such issues should find themself achieving the sharpest bounce on the first noticeable rally. We must hasten to add, however. that this action most assuredly does not mean that these stocks have the potential to be upside leaders. Before recovery can be foreseen, a protracted period of basebuilding must take place, and most finance stocks, having reached short-term objectives, are probably now trading around the upper limit of where those bases will be formed. ' In contrast to the banks and insurers. there exists another large group of issues whose market action has been diametrically opposite. These are the usual suspect. institutional favorites possessing impeccable growth records. Such stocks were generally resistant to the 1990 decline. Philip MorriS, as good an archetype as any, feU only 13 between July and October. and was recently trading above its early October high. one of only 50 stocks in the S & P 500 to have acheived that feat. The technical pattern indeed suggests that it could sell at still higher levels, along with a host of similar well-known names in the food. consumer, and health-care fields. We are, however, inclined to question whether these issues have the potential to lead a dynamic bull market from current levels. For the time being. therefore, we are inclined to maintain the pessimistic, short-to-intermediate-term outlook discussed in our final 1990 letters. As we noted at that time, the further weakness we anticipate could well provide a major buying opportunity. Dm. Jones Industrials (1200) S & P 500 (1200) Cumulative Index 0/3/90 AWTjb 2564.10 320.27 4539.15 ANTHONY W. T4.BELL DELAFIELD, HARVEY, TABELL INC. No statement or e)(preSSlon of Opinion or any other matter herein contaIned IS, or IS to be deemed to be, directly or indirectly, an offer or the soliCitatIOn of an offer to buy or sell any secunty referred to or mentioned The matter IS presented merely for the convenience of the subscnber While we beheve the sources of our informatIOn to be reliable, we In no way represent or guarantee the accuracy thereof nor of the statements made herem Any actIOn to be taken by the subscnber should be based on hiS own mvestlgallOn and information Delafield, Harvey, Tabell Inc , as a corporation and rts officers or employees, may now have, or may later take, posilions or Irades In respect to any securrtles menboned In this or any future ISSue, and such posrtlOn may be dlfferenl from any views now or hereafter expressed In thiS or any other ISSue Delafield, Harvey, Tabellinc , which IS registered wrth the SEC as an Investment adVisor, may give adVice to rts Investment adVISOry and other customers Independently of any S1atemenls made In thIS or In any other Issue Fur1her mformahon on any secUrity mentioned herein IS available on request