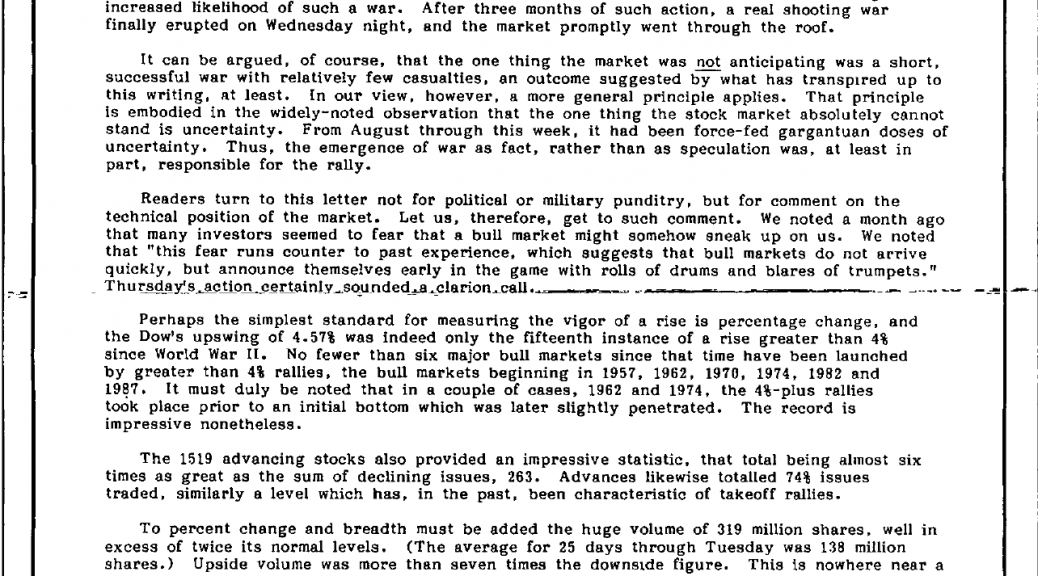 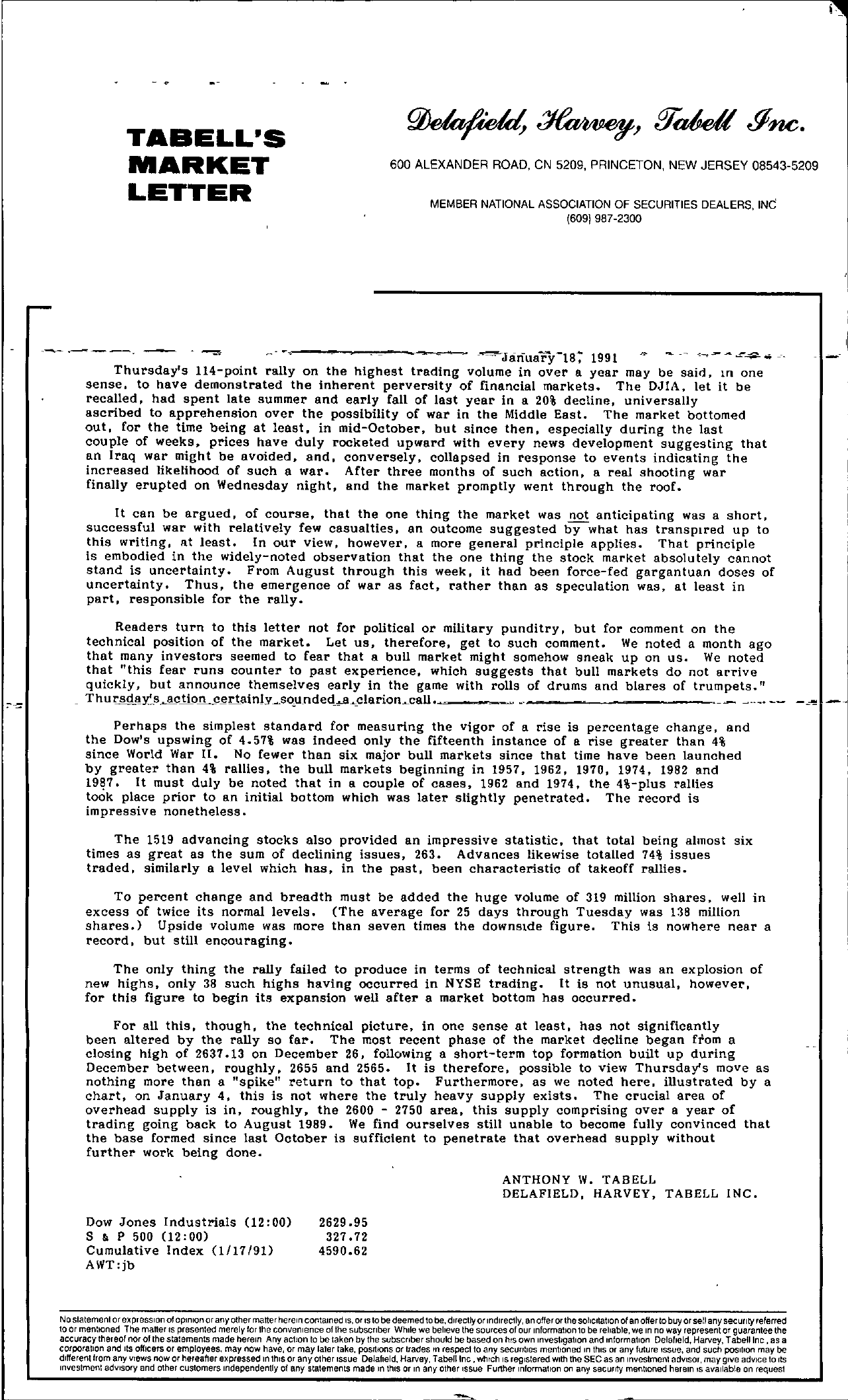 TABELL'S MARKET LETTER 600 ALEXANDER ROAD, CN 5209, PRINCETON, NEW JERSEY 08543-5209 MEMBER NATIONAL ASSOCIATION OF SECURITIES DEALERS, INC (609) 987-2300 —- …——- – 'Jariuary-187 1991 –.- -.- — …. –. Thursday's 114-point rally on the highest trading volume in over a year may be said, HI one sense, to have demonstrated the inherent perversity of financial markets. The DJIA, let it be recalled, had spent late summer and early fall of last year in a 20 decline, universally ascribed to apprehension over the possibility of war in the Middle East. The market bottomed out, for the time being at least. in mid-October, but since then, especially during the last couple of weeks, prices have duly rocketed upward with every news development suggesting that an Iraq war might be avoided, and, conversely, collapsed in response to events indicating the increased likelihood of such a war. After three months of such action, a real shooting war finally erupted on Wednesday night, and the market promptly went through the roof. It can be argued, of course, that the one thing the market was not anticipating was a short. successful war with relatively few casualties, an outcome suggested by what has transplred up to this writing, at least. In our view, however, a more general principle applies. That principle is embodied in the Widely-noted observation that the one thing the stock market absolutely cannot stand is uncertainty. From August through this week, it had been force-fed gargantuan doses of uncertainty. Thus, the emergence of war as fact, rather than as speculation was, at least in part, responsible for the rally, Readers turn to this letter not for political or military punditry, but for comment on the technical pOSition of the market. Let us, therefore, get to such comment. We noted a month ago that many investors seemed to fear that a bull market might somehow sneak up on us We noted that this fear runs counter to past experience, which suggests that bull markets do not arrive quiCkly, but announce themselves early in the game with rolls of drums and blares of trumpets Th u rsdI!Ys…!!lltio1L-c!1rtain!ysounded….clarioncall. Perhaps the simplest standard for measuring the vigor of a rise is percentage change. and the Dow's upswing of 4.57 was indeed only the fifteenth instance of a rise greater than 4 since World War II. No fewer than six major bull markets since that time have been launched by greater than 4 rallies, the bull markets beginning in 1957, 1962, 1970, 1974, 1982 and 197. It must duly be noted that in a couple of cases, 1962 and 1974, the 4-plus rallies took place prior to an initial bottom which was later slightly penetrated. The record is impressive nonetheless. The 1519 advancing stocks also provided an impressive statistic, that total being almost six times as great as the sum of declining issues, 263. Advances likewise totalled 74 issues traded, similarly a level which has, in the past, been characteristic of takeoff rallies. To percent change and breadth must be added the huge volume of 319 million shares, well in excess of twice its normal levels. (The average for 25 days through Tuesday was 138 million shares.) Upside volume was more than seven times the downslde figure. This is nowhere near a record, but still encouraging. The only thing the rally failed to produce in terms of technical strength was an explosion of new highs, only 38 such highs having occurred in NYSE trading. It is not unusual, however, for this figure to begin its expansion well after a market bottom has occurred. For all this, though, the technical picture, in one sense at least, has not significantly been altered by the rally so far. The most recent phase of the market decline began from a closing high of 2637.13 on December 26, following a short-term top formation built up during December between, roughly, 2655 and 2565. It is therefore, possible to view Thursday's move as nothing more than a spike return to that top. Furthermore, as we noted here, illustrated by a chart, on January 4. this is not where the truly heavy supply exists. The crucial area of overhead supply is in, roughly, the 2600 – 2750 area, this supply comprising over a year of trading going back to August 1989. We find ourselves still unable to become fully convinced that the base formed since last October is sufficient to penetrate that overhead supply without further work being done ANTHONY W. TABELL DELAFIELD, HARVEY, TABELL INC. Dow Jones Industrials (1200) S & P 500 (1200) Cumulative Index (1/17/91) AWTjb 2629.95 327.72 4590.62 — No statement or expression oj opInion or any other matter herein contained IS, or IS to be deemed to be, directly or indirectly, an offer or the soliCitatIOn of an offer to buy or sell any security referred to or mentIOned The matter IS presented merely lor the convenience of the subscriber While we beheve the sources of our Information to be reliable. we In no way represent or guarantee the accuracy thereof nor of the statements made herein Any action to be taken by the subSCriber should be based on hiS own investigatIOn and Information Delafield, Harvey, Tabellinc . as a corporation and ItS officers or employees, may now have, or may later take, positIOns or trades In respect to any securities menlloned In thiS or any future Issue, and such posItIOn may be different from any views now or hereafter expressed In thiS or any other Issue Delafield, Harvey, Tabelllnc, which IS registeredwlih the SEC as an Investment adVisor. may give adVIce to Its Investment adVISOry and other customers Independently of any statements made In this or In any other Issue Further Information on any secuTity mentioned herein IS available on request