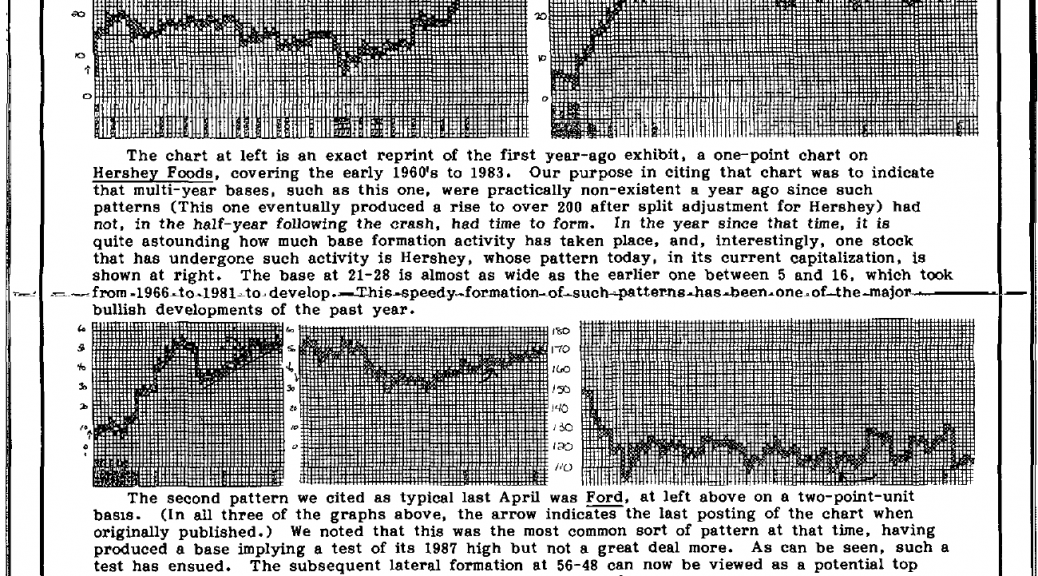 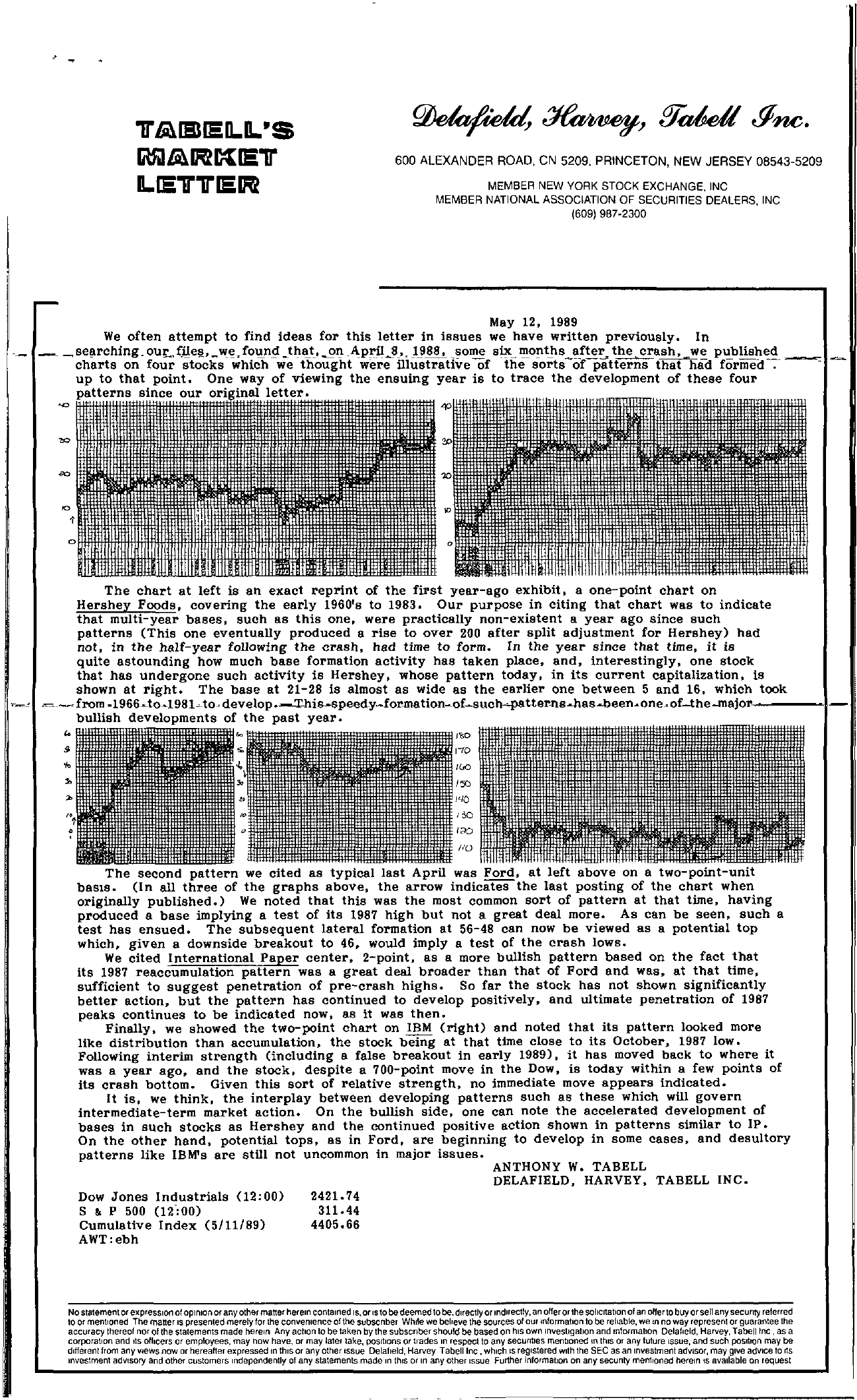 U'J.ii.\ ISlE n.. n..' S J.ii.\1Rl IEU' n..IEYYIER 600 ALEXANDER ROAD, CN 5209, PRINCETON, NEW JERSEY 08543-5209 MEMBER NEW YORK STOCK EXCHANGE, INC MEMBER NATIONAL ASSOCIATION OF SECURITIES DEALERS, INC (609) 987-2300 May 12, 1989 We often attempt to find ideas for this letter in issues we have written previously. In searching.ou!'..ti1e.wJoundthat.-n.Aprii 8 . 1988. some six months after the crash, we published charts on four stocks which-we -til-ought -were illustrative ofiii,,- 80rtSofpatterns thathad formed -, up to that point. One way of viewing the ensuing year is to trace the development of these four since our letter. The chart at left is an exact reprint of the first year-ago exhibit. a one-point chart on Hershey Foods. covering the early 1960's to 1983. Our purpose in citing that chart was to indicate that multi-year bases. such as this one, were practically non-existent a year ago since such patterns (This one eventually produced a rise to over 200 after split adjustment for Hershey) had not. in the half-year following the crash. had time to form. In the year since that time. it is quite astounding how much base formation activity has taken place, and. interestingly, one stock that has undergone such activity is Hershey. whose pattern today. in its current capitalization, is shown at right. The base at 21-28 is almost as wide as the earlier one between 5 and 16, which took T from .1966to.1981to develop .-f-his-speedy-fomation-ofsuch48ttens-has-been.one. of-the -majo'—–I bullish developments of the past year. The second pattern we cited as typical last April was Ford. at left above on a two-paint-unit baSIS. (In all three of the graphs above. the arrow indicates the last posting of the chart when originally published.) We noted that this was the most common sort of pattern at that time. having produced a base implying a test of its 1987 high but not a great deal more. As can be seen, such a test has ensued. The subsequent lateral formation at 56-48 can now be viewed as a potential top which, given a downside breakout to 46. would imply a test of the crash lows. We cited International Paper center. 2-point, as a more bullish pattern based on the fact that its 1987 reaccumulation pattern was a great deal broader than that of Ford and was. at that time. sufficient to suggest penetration of pre-crash highs. 80 far the stack has not shown significantly better action. but the pattern has continued to develop positively. and ultimate penetration of 1987 peaks continues to be indicated now J as it was then. Finally. we showed the two-point chart on IBM (right) and noted that its pattern looked more like distribution than accumulation. the stock being at that time close to its October. 1987 low. Following interim strength (including a false breakout in early 1989), it has moved back to where it was a year ago, and the stock, despite a 700-point move in the Dow, is today within a few points of its crash bottom. Given this sort of relative strength, no immediate move appears indicated. It is. we think, the interplay between developing patterns such as these which will govern intermediate-term market action. On the bullish side, one can note the accelerated development of bases in such stocks as Hershey and the continued positive action shown in patterns similar to IP. On the other hand. potential tops, as in Ford, are beginning to develop in some cases, and desultory patterns like IBM's are still not uncommon in major issues. ANTHONY W. TABELL DELAFIELD, HARVEY. TABELL INC. Dow Jones Industrials (1200) 2421.74 8 & P 500 (1200) 311.44 Cumulative Index (5/11/89) 4405.66 AWTebh No statement or expression 01 opInion or any other matter herein contained IS, or IS to bedeemed to be, directly or Indirectly, an offeror the solicitation of an offer to buy orsel1 any secunty referred to or mentioned The matter IS presented merely lor the convenience of the subscnber While we beheve the sources of our Information to be reliable, we In no way represent or guarantee the accuracy thereof nor althe statements made herein Any action to be taken by the subscnber should be based on hiS own investigation and informatIOn Delafield, Harvey, Tabell Inc, as a corporation and lIs officers or employees, may now have, or may later take, positions or trades In respect to any secUrities mentioned In thiS or any future Issue, and such pOSllton may be different from any views now or hereafter expressed In thiS or any other Issue Delafield, Harvey Tabellinc ,WhiCh IS registered With the SEC as an investment adVisor, may give advice to Its Investment adVISOry and other customers Independently 01 any statements made In thiS or In any other Issue Further Information on any secunty menlloned herein IS available on request