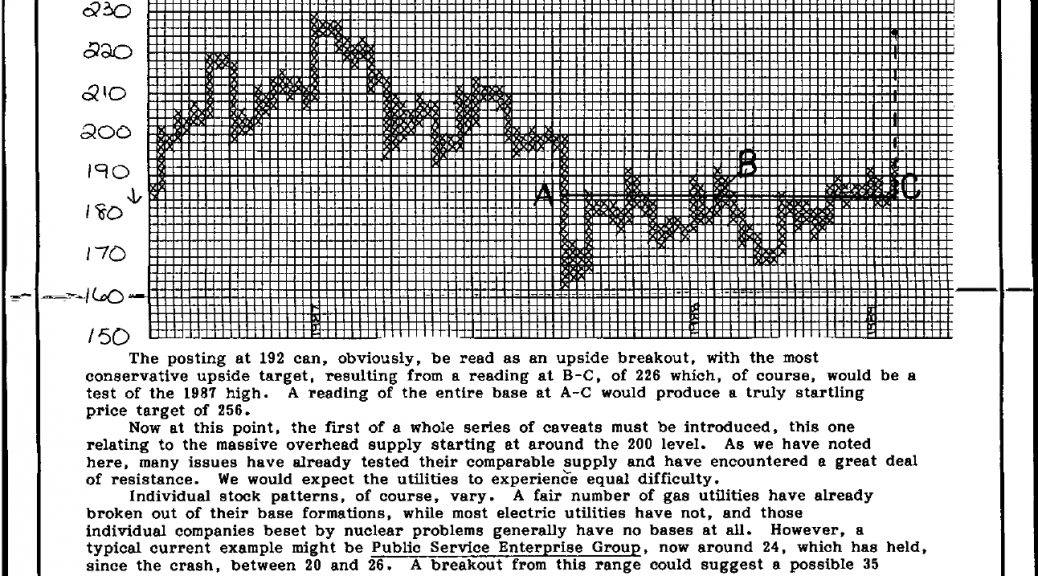 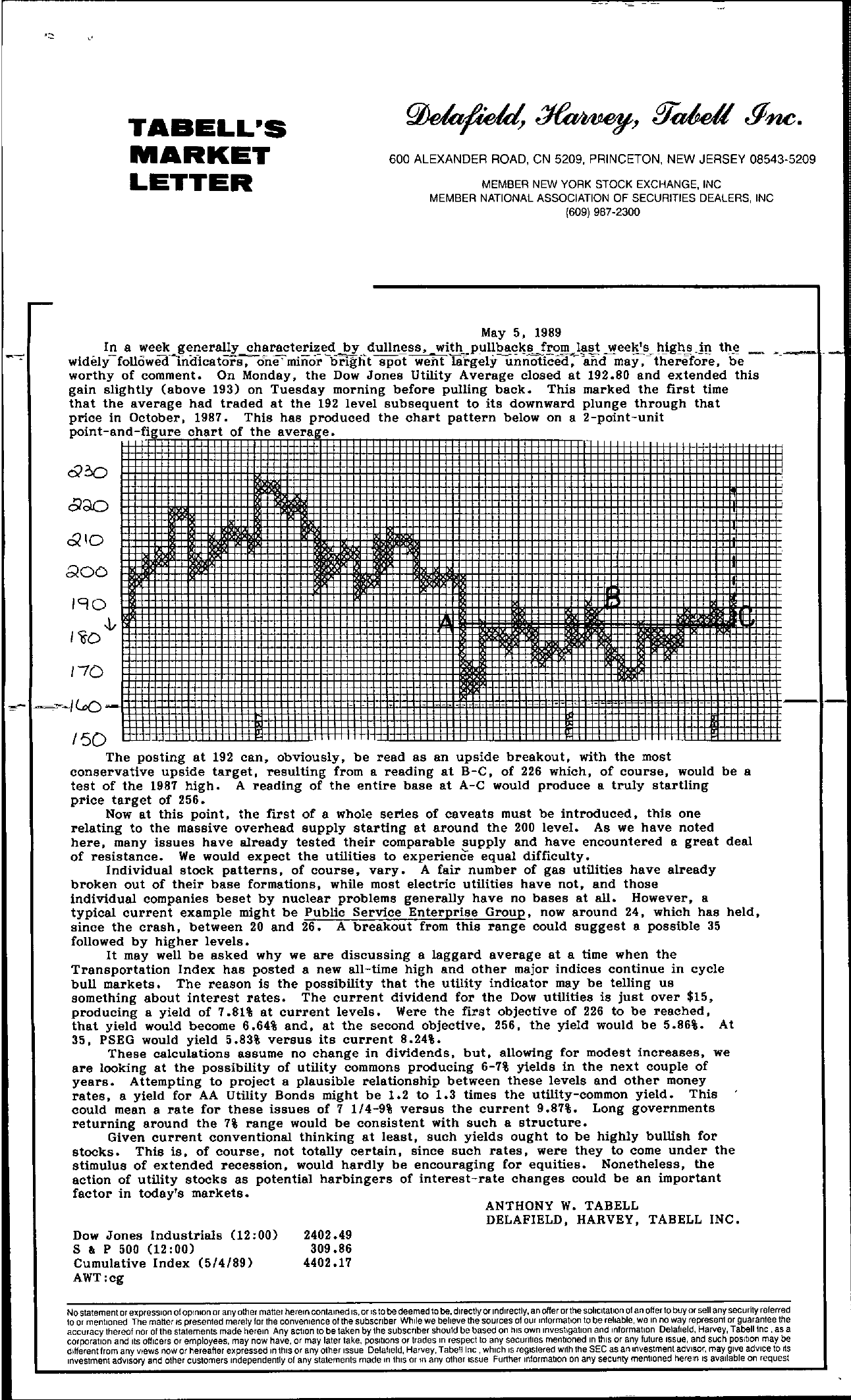 TABELL'S MARKET LETTER 600 ALEXANDER ROAD, CN 5209, PRINCETON, NEW JERSEY 08543-5209 MEMBER NEW YORK STOCK EXCHANGE, INC MEMBER NATIONAL ASSOCIATION OF SECURITIES DEALERS, INC (609) 987-2300 May 5, 1989 In a week generally characterized by dullness, with pullbacks from last week's highs.in the widely- follow,nildlca toneminor -bnght spot weilt IatgeljrunnOtici;dand-may , therefore, I)-e worthy of comment. On Monday, the Dow Jones Utility Average closed at 192.80 and extended this gain slightly (above 193) on Tuesday morning before pulling back. This marked the first time that the average had traded at the 192 level subsequent to its downward plunge through that price in October, 1987. This has produced the chart pattern below on a 2-point-unit curt of the &D c9 &10 QOO II 190 1'0 1/0 ,-.. I(Q – . .- II 150 The posting at 192 can, Obviously, be read as an upside breakout, with the most conservative upside target, resulting from a reading at B-C, of 226 which, of course, would be a test of the 1987 high. A reading of the entire base at A-C would produce a truly startling price target of 256. Now at this point, the first of a whole series of caveats must be introduced, this one relating to the massive overhead supply starting at around the 200 level. As we have noted here, many issues have already tested their comparable supply and have encountered a great deal of resistance. We would expect the utilities to experience equal difficulty. Individual stock patterns, of course, vary. A fair number of gas utilities have already broken out of their base formations, while most electric utilities have not, and those individual companies beset by nuclear problems generally have no bases at all. However, a typical current example might be Public Service Enterprise Group, now around 24, which has held, since the crash, between 20 and 26. A breakout from this range could suggest a possible 35 followed by higher levels. It may well be asked why we are discussing a laggard average at a time when the Transportation Index has posted a newall-time high and other major indices continue in cycle bull markets. The reason is the possibility that the utility indicator may be telling us something about interest rates. The current dividend for the Dow utilities is just over 15, producing a yield of 7.81 at current levels. Were the first objective of 226 to be reached, that yield would become 6.64 and, at the second objective, 256, the yield would be 5.86. At 35, PSEG would yield 5.83 versus its current 8.24. These calculations assume no change in dividends. but, allowing for modest increases. we are looking at the possibility of utility commons producing 6-7 yields in the next couple of years. Attempting to project a plausible relationship between these levels and other money rates, a yield for AA Utility Bonds might be 1.2 to 1.3 times the utility-common yield. This could mean a rate for these issues of 7 1/4-9 versus the current 9.87. Long governments returning around the 7 range would be consistent with such a structure. Given current conventional thinking at least, such yields ought to be highly bullish for stocks. This is. of course, not totally certain, since such rates. were they to come under the stimulus of extended recession, would hardly be encouraging for eqUities. Nonetheless, the action of utility stocks as potential harbingers of interest-rate changes could be an important factor in today's markets. ANTHONY W. TABELL DELAFIELD, HARVEY, TAB ELL INC. Dow Jones Industrials 02 00) 2402.49 S & P 500 (1200) 309.86 Cumulative Index (5/4/89) 4402.17 AWTcg No statement or expression of Opinion or any other matler herein contamed IS, or IS to be deemed to be, directly or Indirectly, an offer crthe soitCltatlon of an offerlo buy or sell any security referred 10 or mentioned The matter IS presented merely for the convemence of the subSCriber While we beheve the sources of our informatIOn to be reliable, we In no way represent or guarantee the accuracy thereof nor of the statements made herein Any BellOn to be laken by Ihe subscnber should be based on hiS own Invesllgatlon and Informallon Delafield, Harvey, Tabellinc ,as a corporation and Its officers or employees, may now haye, or may later take, POSitions or trades In respect to any securities mentioned In thiS or any future Issue, and such posItion may be dllferent from any vtews now or hereafter expressed tn thts or any other tssue Delafteld, Harvey, Tabell Inc, whtch tS regtstered with the SEC as an In\Jestmen! adVisor, may give adVice to Its Investment adVISOry and other customers tndependently or any statements made tn thiS or tn any other Issue Further information on any security menttoned herein IS avatlable on request