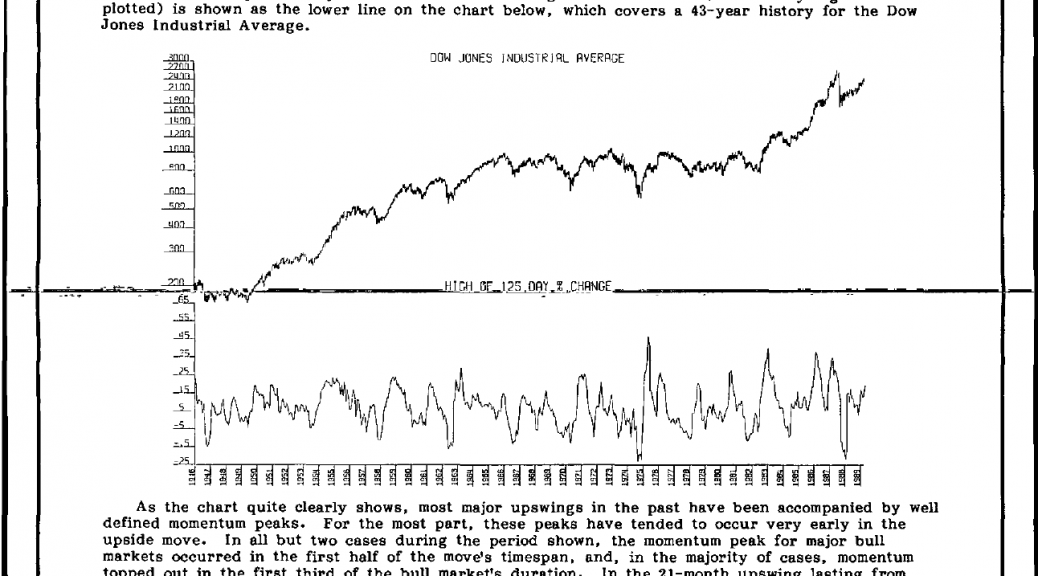 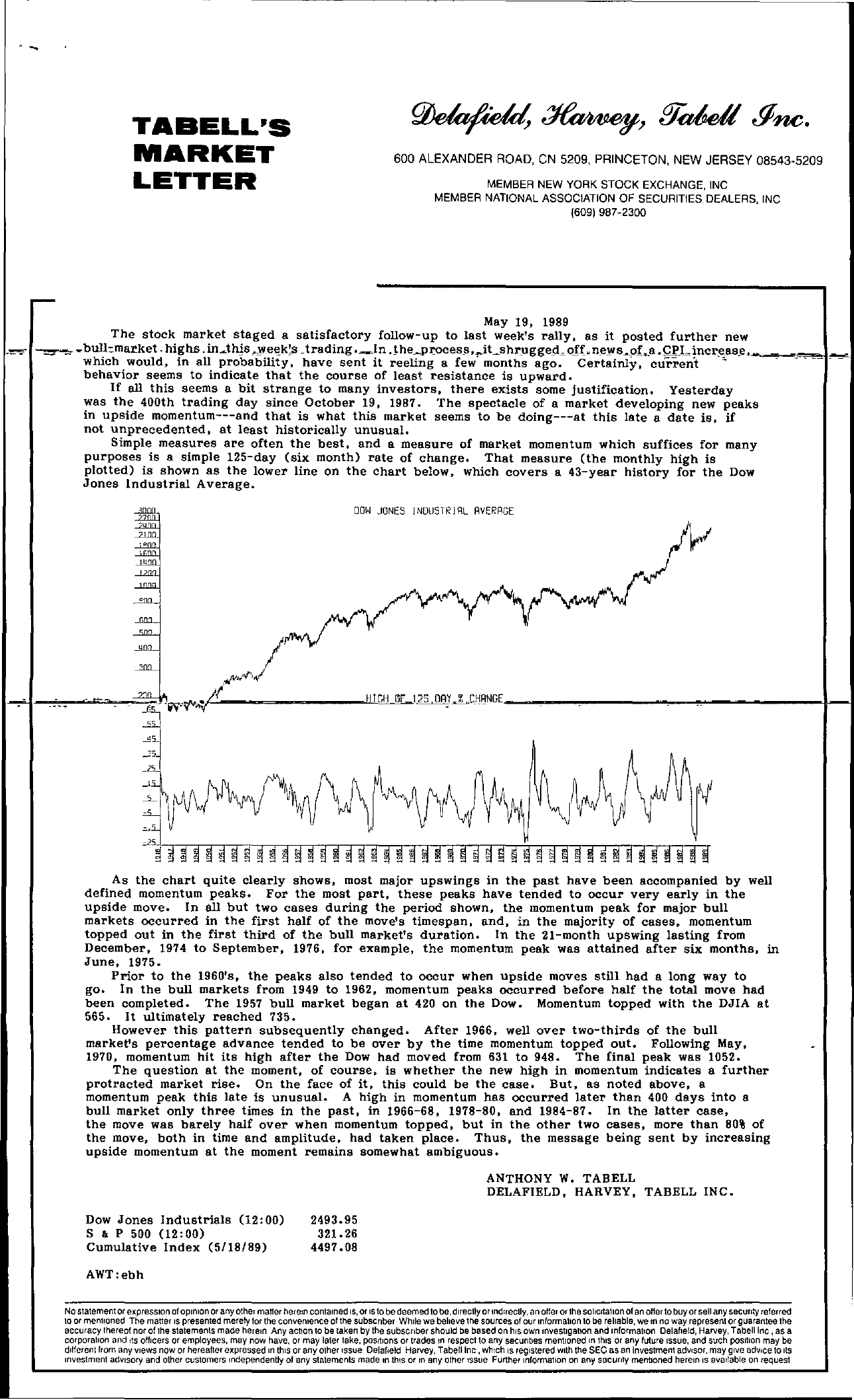 TABELL'S MARKET LETTER 600 ALEXANDER ROAD, CN 5209, PRINCETON, NEW JERSEY 08543-5209 MEMBER NEW YORK STOCK EXCHANGE, INC MEMBER NATIONAL ASSOCIATION OF SECURITIES DEALERS, INC (6091987-2300 May 19, 1989 The stock market staged a satisfactory follow-up to 18St week's rally. as it posted further new 'e!- ….. bullmar.ket. highs. in…..thJs .,-Y'ek!s trading ..–..In .!hepces,s. itshrugge.!t- oie n!'lsL..a CPl increas..e, ,,,………..,.. which would. in all probability. have sent it reeling a few' months ago. Certainly. current -; behavior seems to indicate that the course of least resistance is upward4 If all this seems a bit strange to many investors, there exists some justification. Yesterday was the 400th trading day since October 19, 1987. The spectacle of a market developing new peaks in upside rnomentum—and that is what this market seems to be doing—at this late a date is. if not unprecedented, at least historically unusual. Simple measures are often the best, and a measure of market momentum which suffices for many purposes is a simple 125-day (six month) rate of change. That measure (the monthly high is plotted) is shown as the lower line on the chart below, which covers a 43-year history for the Dow Jones Industrial Average. DOW JONES INDUSTRIRL RVERRGE – – – – – – – – – 1HIGH DF 125 DW.).Cjl8NGE…., As the chart quite clearly shows, most major upswings in the past have been accompanied by well defined momentum peaks. For the most part, these peaks have tended to occur very early in the upside move. In all but two cases during the period shown, the momentum peak for major bull markets occurred in the first half of the move's timespan, and. in the majority of cases, momentum topped out in the first third of the bull market's duration. In the 21-month upswing lasting from December, 1974 to September, 1976, for example, the momentum peak was attained after six months, in June, 1975. Prior to the 1960's, the peaks also tended to occur when upside moves still had a long way to go. In the bull markets from 1949 to 1962, momentum peaks occurred before half the total move had been completed The 1957 bull market began at 420 on the Dow. Momentum topped with the DJIA at 565. It ultimately reached 735 However this pattern subsequently changed. After 1966. well over two-thirds of the bull market's percentage advance tended to be over by the time momentum topped out. Following May. 1970, momentum hit its high after the Dow had moved from 631 to 948 The final peak was 1052. The question at the moment. of course, is whether the new high in momentum indicates a further protracted market rise. On the face of it. this could be the case. But. as noted above, a momentum peak this late is unusual. A high in momentum has occurred later than 400 days into a bull market only three times in the past, in 1966-68, 1978-80, and 1984-87. In the latter case, the move was barely half over when momentum topped. but in the other two cases, more than 80 of the move, both in time and amplitude. had taken place. Thus, the message being sent by increasing upside momentum at the moment remains somewhat ambiguous. ANTHONY W. TABELL DELAFIELD, HARVEY, TABELL INC Dow Jones Industrials (12 00) S P 500 (1200) Cumulative Index (5/18/89) 2493.95 321.26 4497.08 AWTebh No statement or expression of opinion or any other matter hereIn contained IS, or IS to be deemed to be, dlrecUyor mdlrectly, an offer Ot the solicl1al1on of an offer to buy or sell any security referred to or menlloned The matter IS presented merely for the convemence of the subSCriber While we believe the sources of our mformatlon to be reliable, we 10 no way represent or guarantee the accuracy thereof nOt of the statements made herem Any action to be taken by the subscnber should be based on his own investigation aod Informalton Delafield, Harvey, Tabelllnc, as a corporallon and Its officers or employees, may now have, or may later take, POSitions or trades In respect to any securilies mentIOned In thiS or any future Issue, and such poSition may be different from any views now or hereafter expressed In thiS or any other Issue Delafield Harvey, Tabelllnc, which IS registered With the SEC as an Investment adVisor, may give adVice to Its Investment adviSOry and other customers mdependently of any statements made In thiS or In any other Issue Further mformaMn on any security mentioned herein IS avatlable on request