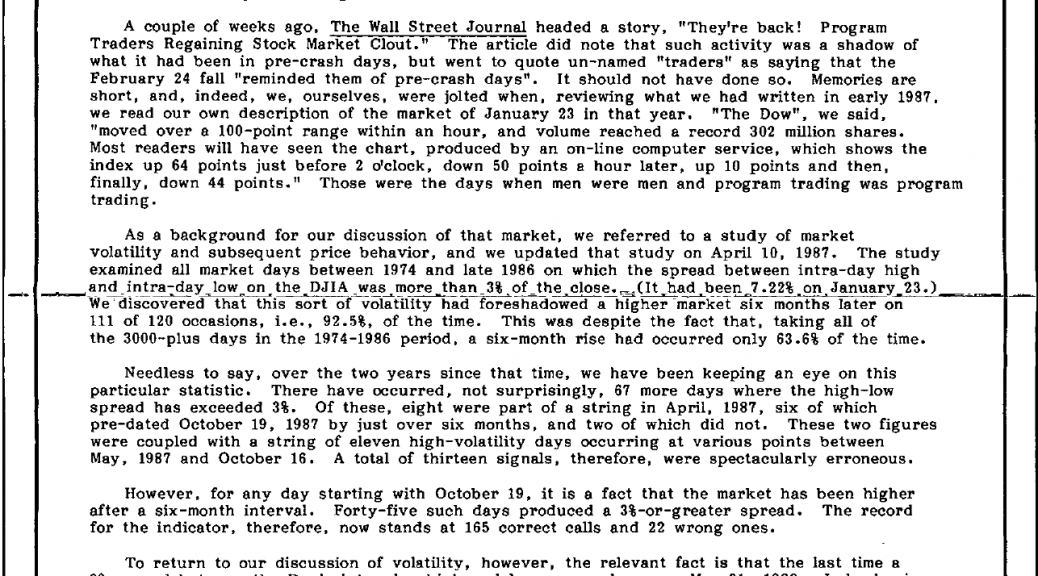 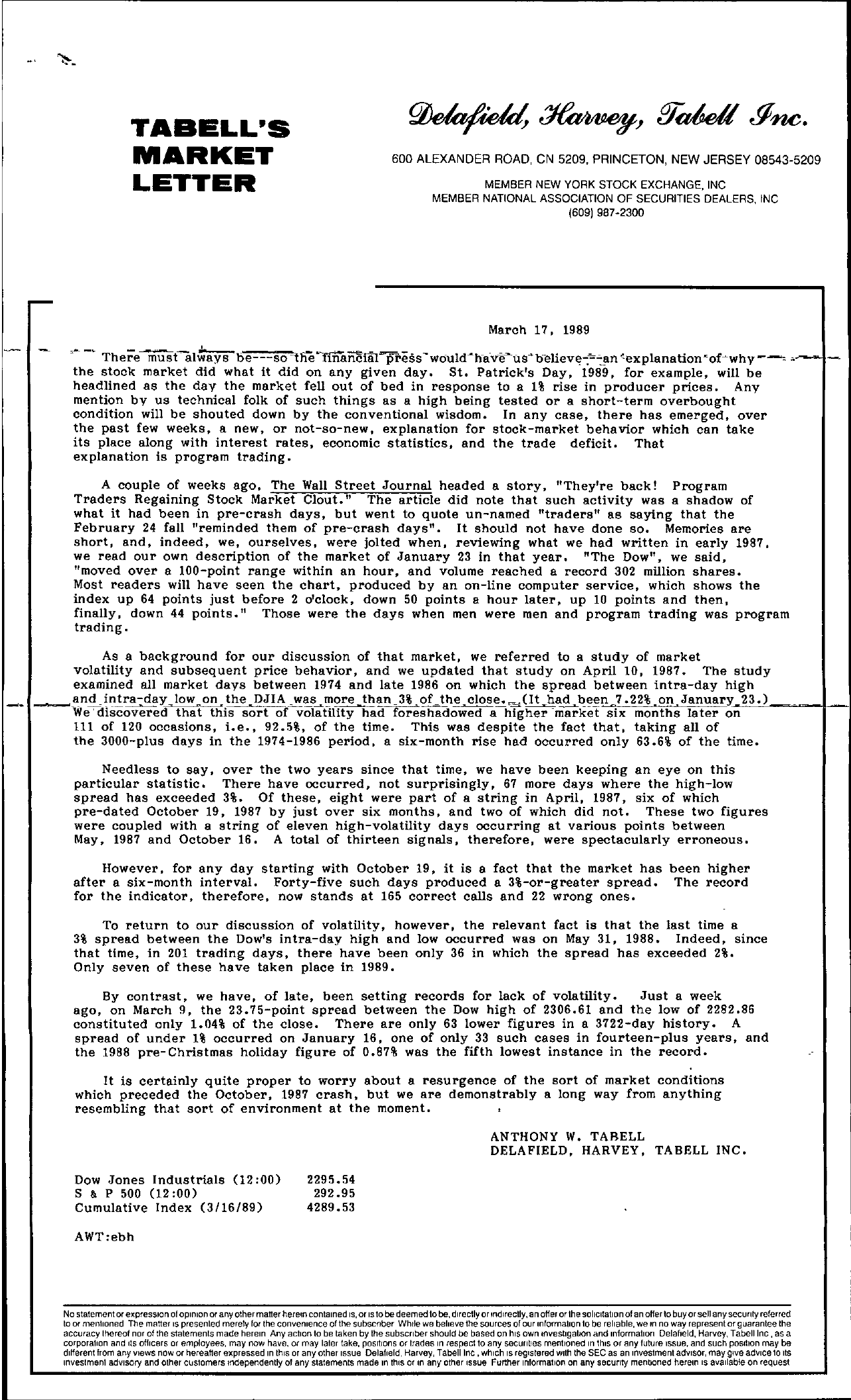 TABELL'S MARKET LETTER 600 ALEXANDER ROAD, CN 5209, PRINCETON, NEW JERSEY 08543-5209 MEMBER NEW YORK STOCK EXCHANGE, INC MEMBER NATIONAL ASSOCIATION OF SECURITIES DEALERS, INC 1609) 987-2300 March 17, 1989 – There—-musfalays be—so -Ule'ffnancIihPress-w6uldhave-o..us'b-e1iev–.an -explanation-of-why— ..- the stock market did what it did on any given day. St. Patrick's Day, 1989, for example, will be headlined as the day the market fell out of bed in response to a 1 rise in producer prices. Any mention by us technical folk of such things as a high being tested or a short-term overbought condition will be shouted down by the conventional wisdom. In any CRse, there has emerged. over the past few weeks. a new, or not-so-new. explanation for stock-market behavior which can take its place along with interest rates, economic statistics, and the trade deficit. That explanation is program trading. A couple of weeks ago, The Wall Street Journal headed a story, They're back! Program Traders Regaining Stock Market Clout. The article did note that such activity was a shadow of what it had been in pre-crash days, but went to quote un-named traders as saying that the February 24 fall reminded them of pre-crash days. It should not have done so. Memories are short, and, indeed, we, ourselves. were jolted when, reviewing what we had written in early 1987. we read our own description of the market of January 23 in that year. The Dow, we said. moved over a IOO-point range within an hour, and volume reached a record 302 million shares. Most readers will have seen the chart. produced by an on-line computer service. which shows the index up 64 points just before 2 o'clock, down 50 points a hour later, up 10 points and then, finally. down 44 points. 11 Those were the days when men were men and program trading was program trading. As a background for our discussion of that market, we referred to a study of market volatility and subsequent price behavior, and we updated that study on April 10, 1987. The study examined all market days between 1974 and late 1986 on which the spread between intra-day high -We–a-n.d -i-n-t raal-sdca yoVIeorweanfst hseorDtJ I0A( vwoaisa tm1 Io1riey ht haadn f3oreosf htahdeowcleoas-ea.-h,Oigt hmaadrkbeetens 7.22 on ix months January 23.) later oc.n '-'-''— -I 111 of 120 occasions, i.e., 92.5, of the time. This was despite the fact that, taking all of the 3000-plus days in the 1974-1986 period, a six-month rise had occurred only 63.6 of the time. Needless to say, over the two years since that time, we have been keeping an eye on this particular statistic. There have occurred, not surprisingly, 67 more days where the high-low spread has exceeded 3. Of these, eight were part of a string in April, 1987, six of which pre-dated October 19, 1987 by just over six months, and two of which did not. These two figures were coupled with a string of eleven high-volatility days occurring at various points between May, 1987 and October 16. A total of thirteen signals, therefore, were spectacularly erroneous. However, for any day starting with October 19, it is a fact that the market has been higher after a six-month interval. Forty-five such days produced a 3-or-greater spread. The record for the indicator, therefore, now stands at 165 correct calls and 22 wrong ones. To return to our discussion of volatility, however, the relevant fact is that the last time a 3 spread between the Dow's intra-day high and low occurred was on May 31, 1988. Indeed, since that time, in 201 trading days, there have been only 36 in which the spread has exceeded 2. Only seven of these have taken place in 1989. By contrast. we have, of late, been setting records for lack of volatility. Just a week ago, on March 9, the 23.75-point spread between the Dow high of 2306.61 and the low of 2282.86 constituted only 1.04 of the close. There are only 63 lower figures in a 3722-day history. A spread of under 1 occurred on January 16, one of only 33 such cases in fourteen-plus years, and the 1988 pre-Christmas holiday figure of 0.87 was the fifth lowest instance in the record. 1t is certainly quite proper to worry about a resurgence of the sort of market conditions which preceded the October, 1987 crash, but we are demonstrably a long way from anything resembling that sort of environment at the moment. ANTHONY W. TARELL DELAFIELD, HARVEY, TABELL INC. Dow Jones Industrials (12 00) S & P 500 (1200) Cumulative Index (3/16/89) 2295.54 292.95 4289.53 AWTebh No statement or eKpreSSlon 01 opInion or any other matter herein contained IS, or IS to be deemed to be, dlreC1ly or Indlreclfy, an offer or the soliCitation of an offer to buy or sell any secunty referred to or mentioned The matter IS presented merely for the convenience of the subscnber While we believe the sources 01 our information to be reliable, we In no way represent or guarantee the accuracy Ihereof nor of the statements made herein Any action to be taken by the subscnber should be based on hiS own investigation and information Delafield, Harvey, Tabellinc , as a corporation and Its officers or employees, may now have, or may later take, poSllions or trades In respeC1to any seCUrities mentIOned In thiS or any future Issue, and such POSition may be different from any views now or hereatler expressed In thiS or any other Issue Delafield, Harvey, Tabellinc , which IS registered With the SEC as an Investment adVisor, may give adVice to Its Investmenl advlso!)' and other customers Independently of any statements made In thiS or In any other Issue Further information on any security mentioned herein IS available on request