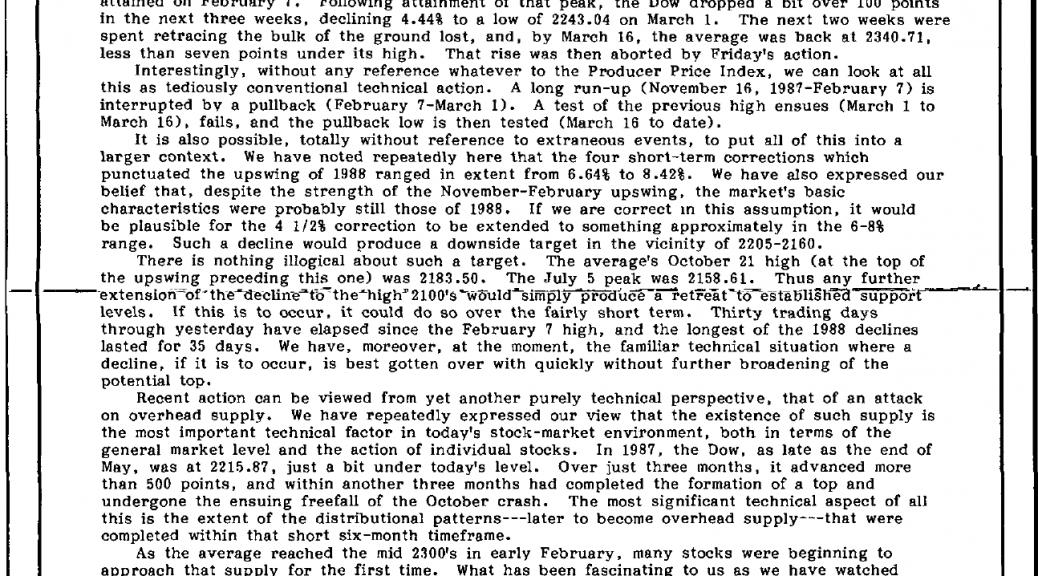 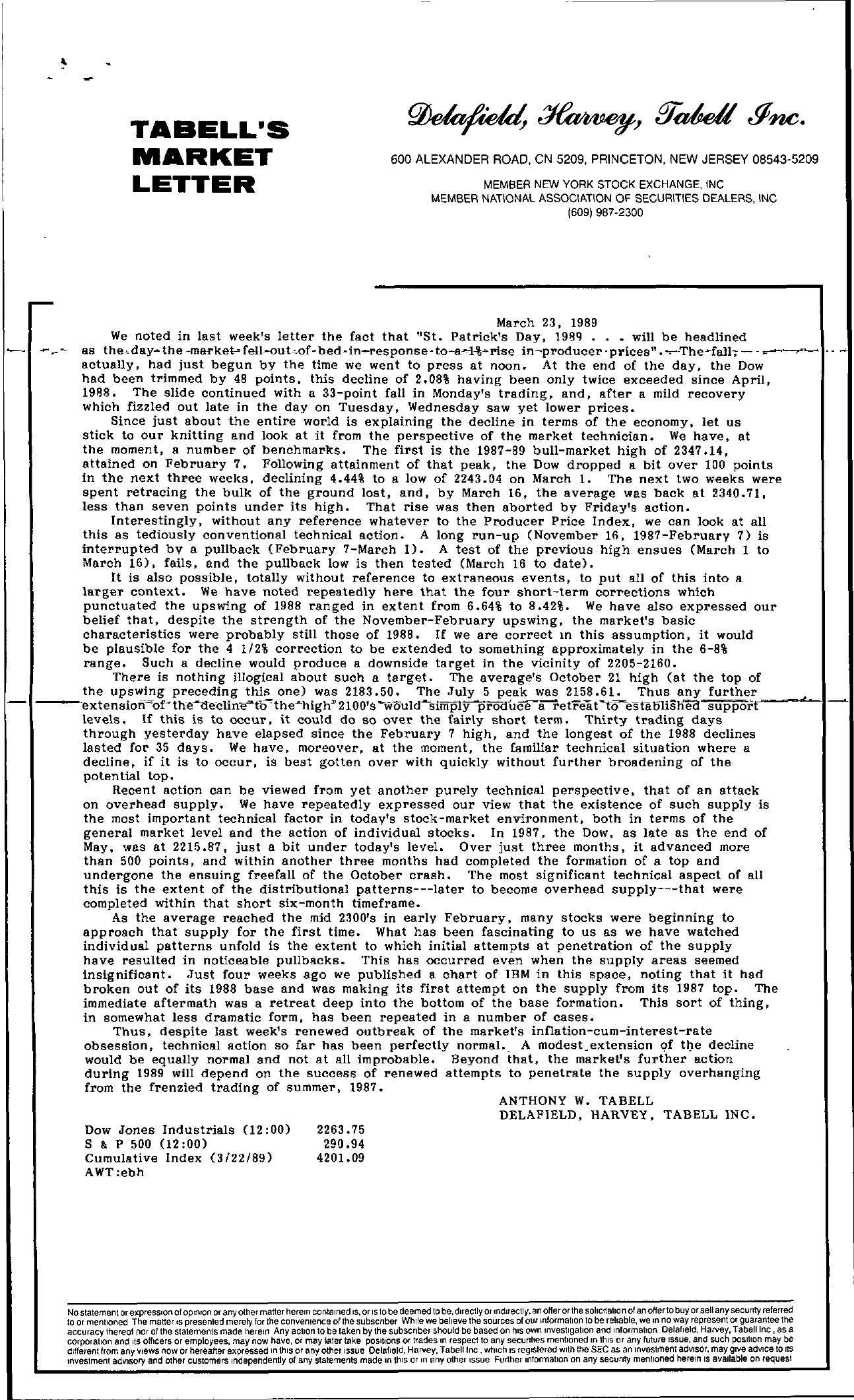 TABELL'S MARKET LETTER 600 ALEXANDER ROAD, CN 5209, PRINCETON, NEW JERSEY 08543-5209 MEMBER NEW YORK STOCK EXCHANGE, INC MEMBER NATIONAL ASSOCIATION OF SECURITIES DEALERS, INC 1609) 987-2300 March 23, 1989 We noted in last week's letter the fact that St. Patrick's Day, 198q . will be headlined — as theoday…. the ma-rket–fell–out-…ofbed-in–responseto-a….f–'rise in–producer -prices .-The'fall. – —'–I actually, had just begun by the time we went to press at noon. At the end of the day, the Dow had been trimmed by 48 points, this decline of 2.08 having been only twice exceeded since April, 1988. The slide continued with a 33-point fall in Monday's trading, and, after a mild recovery which fizzled out late in the day on Tuesday, Wednesday saw yet lower prices. Since just about the entire world is explaining the decline in terms of the economy, let us stick to our knitting and look at it from the perspective of the market technician. We have, at the moment, a number of benchmarks. The first is the 1987-89 bull-market high of 2347.14, attained on February 7. Following attainment of that peak, the Dow dropped a bit over 100 points in the next three weeks, declining 4.44 to a low of 2243.04 on March L The next two weeks were spent retracing the bulk of the ground lost, and, by March 16, the average was back at 2340.71, less than seven points under its high. That rise was then aborted by Friday's action. Interestingly. without any reference whatever to the Producer Price Index, we can look at all this as tediously conventional technical action. A long run-up (November 16, 1987-February 7) is interrupted by a pullback (February 7-March I). A test of the previous high ensues (March 1 to March 16), fails, and the pullback low is then tested (March 16 to date). It is also possible, totally without reference to extraneous events, to put all of this into a larger context. We have noted repeatedly here that the four short-term corrections which punctuated the upswing of 1988 ranged in extent from 6.64 to 8.42. We have also expressed our belief that, despite the strength of the November-February upswing, the market's basic characteristics were probably still those of 1988. If we are correct In this assumption, it would be plausible for the 4 1/2 correction to be extended to something approximately in the 6-8 range. Such a decline would produce a downside target in the vicinity of 2205-2160. There is nothing illogical about such a target. The average's October 21 high (at the top of the upswing preceding this one) was 2183.50. The July 5 peak was 2158.61. Thus any further —–extensionof th-e(je()linetb thehigh' 21 OO's -wouldsiffiPlY proaueearetFeat -toesta1ilisheo support–L'-I levels. If this is to occur, it could do so over the fairly short term. Thirty trading days through yesterday have elapsed since the February 7 high, and the longest of the 1988 declines lasted for 35 daysw We have, moreover, at the moment, the familiar technical situation where a decline, if it is to occur, is best gotten over with quickly without further broadening of the potential top. Recent action can be viewed from yet another purely technical perspective, that of an attack on overhead supply. We have repeatedly expressed our view that the existence of such supply is the most important technical factor in today's stock-market environment, both in terms of the general market level and the action of individual stocks. In 1987, the Dow, as late as the end of May, was at 2215.87, just a bit under today's level. Over just three months, it advanced more than 500 points, and within another three months had completed the formation of a top and undergone the ensuing freefall of the October crash. The most significant technical aspect of all this is the extent of the distributional patterns—Iater to become overhead supply—that were completed within that short six-month timeframe. As the average reached the mid 2300's in early February, many stocks were beginning to approach that supply for the first time. What has been fascinating to us as we have watched individual patterns unfold is the extent to which initial attempts at penetration of the supply have resulted in noticeable pullbacks. This has occurred even when the supply areas seemed insignificant. ,Just four weeks ago we published a chart of IBM in this space, noting that it had broken out of its 1988 base and was making its first attempt on the supply from its 1987 top. The immediate aftermath was a retreat deep into the bottom of the base formation. This sort of thing, in somewhat less dramatic form, has been repeated in a number of cases. Thus, despite last week's renewed outbreak of the market's inflation-cum-interest-rate obsession, technical action so far has been perfectly normal .. A modestextension 9f trye decline would be equally normal and not at all improbable. Beyond that, the market's further action during 1989 will depend on the success of renewed attempts to penetrate the supply overhanging from the frenzied trading of summer, 1987. ANTHONY W. TABELL DELAFIELD, HARVEY, TABELL INC. Dow Jones Industrials (12 00) 2263.75 S & P 500 (1200) 290.94 Cumulative Index (3/22/89) 4201.09 AWTebh No statement or expression of opinion or any other matter herein contained IS, or IS to be deemed to be, dlrectlyor mdlrectly, an offeror the solicllatlon of an offarto buy or sell any secunty referred 10 or mentioned The matter IS presenled merely for the convenience of the subscnber While we believe the sources of our Information to be reliable, we In no way represent or guarantee the accuracy Ihereol nor althe statements made herein Any action to be laken by the subscnber should be based on hiS own lIlves!lgatlon and mforma\lon Delafield, Harvey, Tabelllnc, as a corporatIOn and Its officers or employees, may now have, or may laler take pOSitions or trades In respect to any secunbes mentioned In Ihls or any future Issue, and such posilion may be different from any views now or hereafter expressed In thiS or any other Issue Delafield, Harvey, Tabellinc , which IS registered With the SEC as an Investment adVisor, may give adVice to Its tnvestment adVISOry and other customers Independently of any statements made In thiS or m any other ISSue Further Information on any security mentioned herem IS available on request