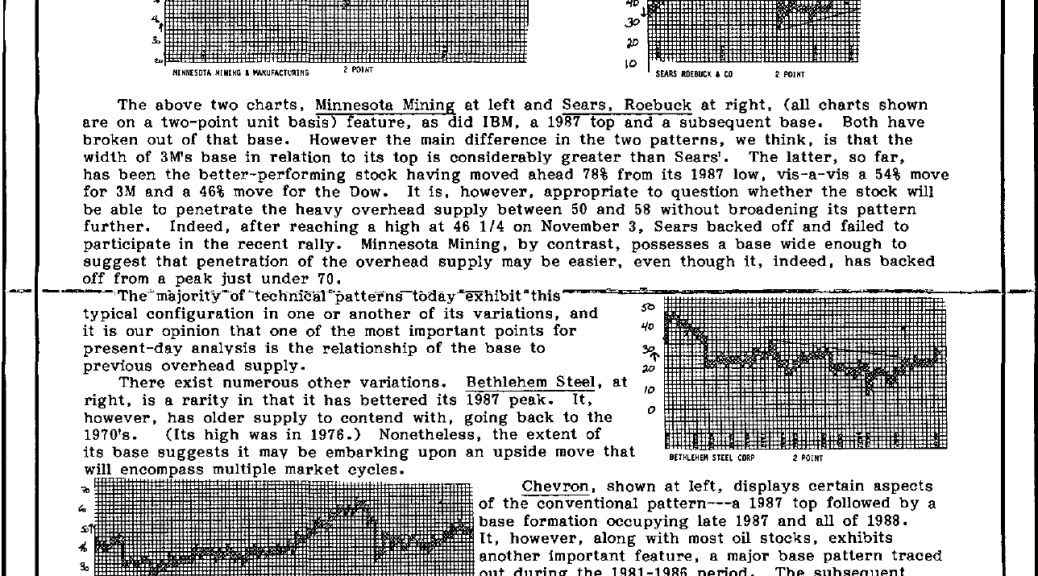 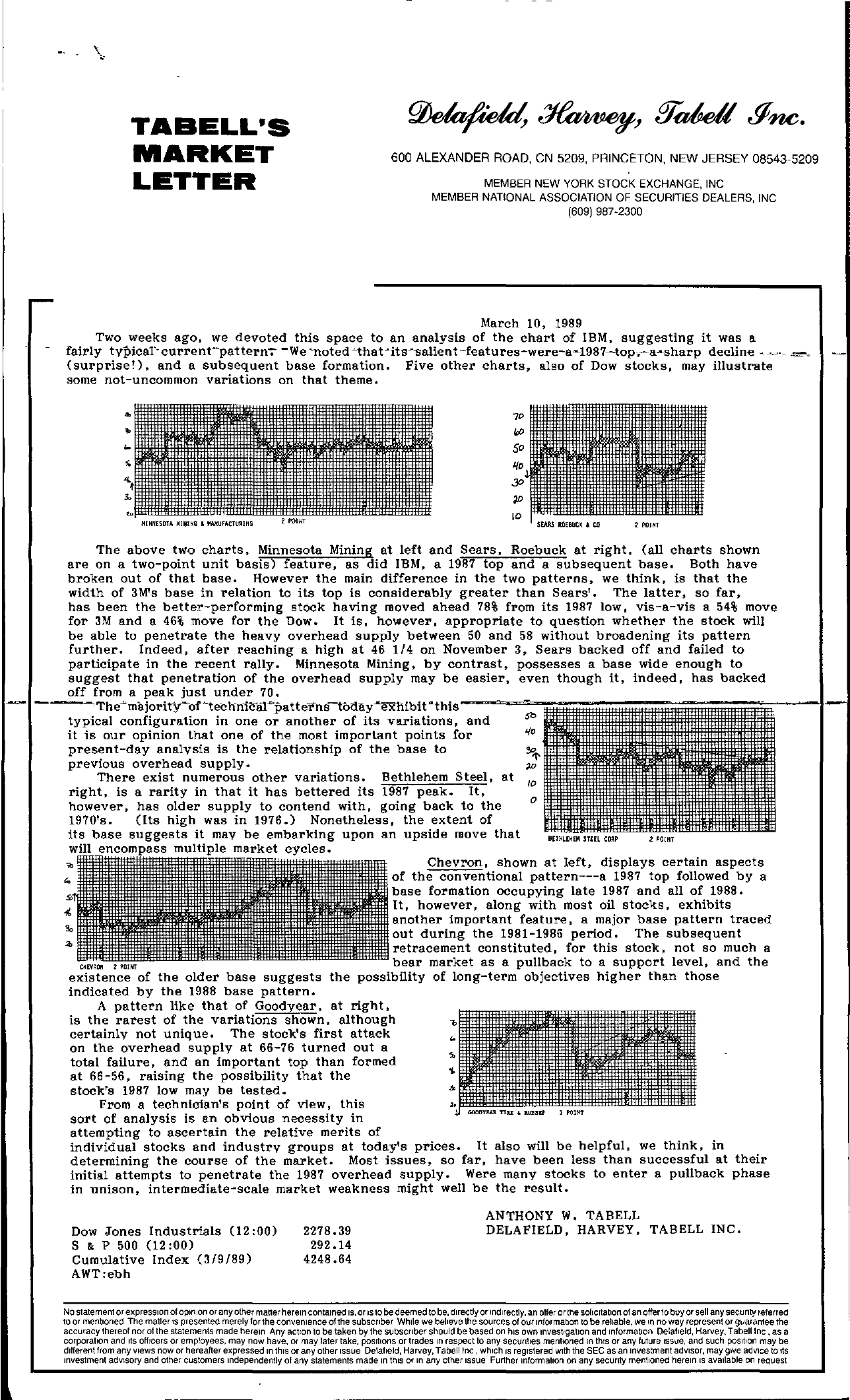 \ TABELL'S MARKET LETTER 600 ALEXANDER ROAD, CN 5209, PRINCETON, NEW JERSEY 08543-5209 MEMBER NEW YORK STOCK EXCHANGE, INC MEMBER NATIONAL ASSOCIATION OF SECURITIES DEALERS, INC (609) 987-2300 March 10, 1989 Two weeks ago, we devoted this space to an analysis of the chart of IBM, suggesting it was a fairly typicaT-current-pattern -We noted th8titssa1ient-features-were-a—1987top-.aA-sharp declin-e – -,,- . …- -(surprise!), and a subsequent base formation4 some not-uncommon variations on that theme Five other charts, also of Dow stocks, may illustrate 50 o .JO Ii' MINNESOTA lUNING. I'AIIUFACTURIHG 10 SEARS ROEBUCK l co 2 POINT The above two charts, Minnesota Mining at left and Sears, Roebuck at right, (all charts shown are on a two-point unit basis) feature, as did IBM, a 1987 top and a subsequent base. Both have broken out of that base. However the main difference in the two patterns, we think, is that the width of 3M's base in relation to its top is considerably greater than Sears'. The latter, so far, has been the better-performing stock having moved ahead 78 from its 1987 low, vis-a-vis a 54 move for 3M and a 46 move for the Dow. It is, however, appropriate to question whether the stock will be able to penetrate the heavy overhead supply between 50 and 58 without broadening its pattern further. Indeed, after reaching a high at 46 114 on November 3, Sears backed off and failed to participate in the recent rally. Minnesota Mining, by contrast, possesses a base wide enough to suggest that penetration of the overhead supply may be easier, even though it, indeed, has backed off from a peak just under 70. typi'cTahlecmolnlfjiogruitrya-tioofn-teinchnoniel!o.rIapantottehrensr,oodflliytsexvta\lrbiaitti'ontsh, ianSd;–O;IIIIIIIIIIIIIIII—1 it is our opinion that one of the most important points for I/o present-day analysis is the relationship of the base to \01- There exist numerous other variations. Bethlehem Steel, at /0 supply 11111111111111111prirgehvito, uiss oaverarhrietayd in that it has bettered its 1987 peak. It, however, has older supply to contend with, going back to the wo 1970's. (Its high was in 1976.) Nonetheless, the extent of its base suggests it may be embarking upon an upside move that BETHlEHEM mEl (ORP 2 POINT will multiple market cycles. Chevron, shown at left, displays certain aspects of the conventional pattern—a 1987 top followed by a base formation occupying late 1987 and all of 1988. It, however, along with most oil stocks, exhibits another important feature, a major base pattern traced out during the 1981-1986 period. The subsequent retracement constituted, for this stock. not so much a CIIEYROII Z POINT bear market as a pullback to a support level, and the existence of the older base suggests the possibility of long-term objectives higher than those indicated by the 1988 base pattern. A pattern like that of Goodyear, at right, is the rarest of the variations shown, although certainly not unique. The stock's first attack on the overhead supply at 66-76 turned out a total failure, and an important top than formed at 66-56, raising the possibility that the stock's 1987 low may be tested. From a technician's pOint of view. this sort of analysis is an obvious necessity in 2 POINT attempting to ascertain the relative merits of individual stocks and industry groups at today's prices. It also will be helpful, we think, in determining the course of the market. Most issues, so far, have been less than successful at their initial attempts to penetrate the 1987 overhead supply. Were many stocks to enter a pullback phase in unison. intermediate-scale market weakness might well be the result. Dow Jones Industrials (12 00) S & P 500 (1200) Cumulative Index (3/9/89) AWTebh 2278.39 292.14 4248.64 ANTHONY W. TABELL DELAFIELD, HARVEY, TAB ELL INC. No statement or expreSSion 01 opinion or any other matter herein contained IS,m IS to be deemed to be, directly or Indlreclly, an offer or the soilcltalion of an offer to buy or sell any security referred to or mentioned The matter IS presented merely for the convenience of the subscriber While we beheve the sources of our Information to be reliable, we In no way represent or guarantee the accuracy thereof nor of the statements made herein Any action to be taken by the subscriber should be based on hiS own investigation and information Delafield, Harvey, Tabellinc ,as a corporaliOn and liS officers or employees, may now have, or may later take, poSitions or trades In respect to any seCUrities mentJoned In thiS or any future Issue, and such poSition may be different from any views now or hereafter expressed In thiS or any other Issue Delafield, Harvey. Tabellinc , which IS registered with the SEC as an Investment adVISor, may give adVice to ItS Investment adVISOry and other customers Independently of any statements made In thiS or In any other Issue Further information on any seCUrity menliOned herein IS available on request